Sinkholes are a fact of life for residents of the Sunshine State. 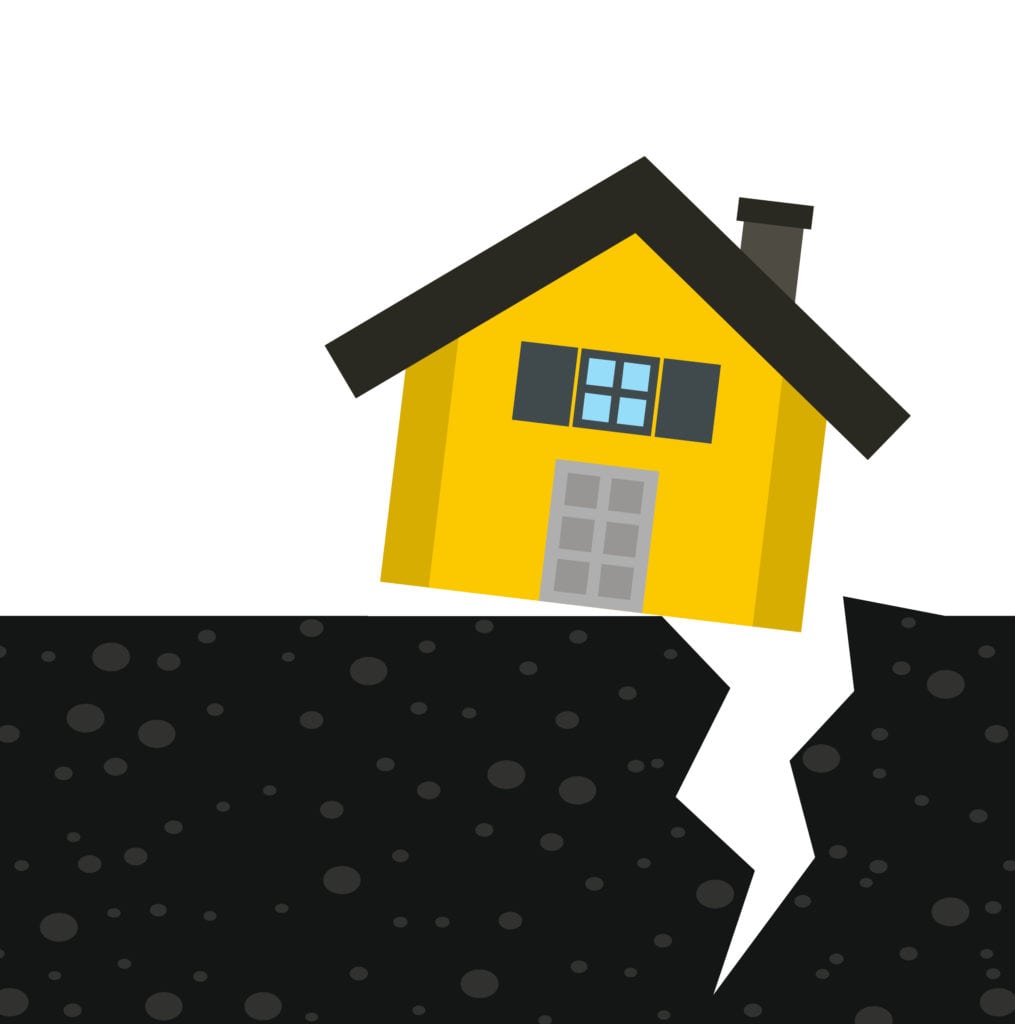 It’s the stuff of nightmares. The ground opening up and swallowing a home, vehicle or person makes for a riveting horror movie.

Living in Florida, where parts of the state are actually referred to as “sinkhole alley,” means ground cover collapse is a reality.

The simplest definition of a sinkhole is “the collapse of surface sediments into underground voids.”

“Conditions here are ideal for sinkholes to form because of the layer of carbonate rock—limestone primarily—at some depth below the surface. Over time and interaction with water, limestone tends to dissolve, creating cracks and cavities. Think of Rice Krispies with all their little openings,” notes Dr. Manoj Chopra, a professor of geotechnical engineering at University of Central Florida in Orlando.

Another good visual is to think of the rock below the surface as a honeycomb filled with cavities of different sizes. This kind of terrain, typically known as “karst,” is not unique to Florida. Twenty percent or more of the United States is underlain with limestone and other rock that can dissolve.

“Sinkholes can occur wherever limestone or similar sedimentary rock is below the surface,” says Chopra. “We’re so used to thinking of rock as a material that doesn’t dissolve, but sedimentary rock, particularly carbonate rock, is soft and dissolves when interacting with water.

The majority of U.S. sinkhole damage occurs in Florida, Texas, Alabama, Missouri, Kentucky, Tennessee and Pennsylvania, as a result of karst terrain.

“In Florida, we have an intricate upper and lower aquifer system, and whatever we do relates to the water and soil system because the aquifer is so close to the surface,” says Chopra. “The entire state has a shallow water surface. In some places it’s just a few feet below the surface, and in the event of a tropical storm, the water can even reach the surface.”

Chopra explains that the sinkhole phenomenon is all about the interaction of soil with ground water. Two common water-soil interactions can greatly increase the chance of sinkholes developing. These include heavy rains and pumping groundwater for irrigation or the public water supply.

“If you have layer of cracked limestone with soil over top of it and then pour water on it, the water flows into the cracks (holes) in the rock and tends to take the soil with it,” says Chopra. “Over time, the soil is migrating into these cracks, and those holes, which can be close to the surface or very deep, get bigger and bigger.”

Eventually, the “roof” (ceiling) becomes unable to support the weight of the overlying soil and collapses into the underground cavity. That’s what we call a collapsed sinkhole, typically a circular hole that forms over a period of minutes or hours. The edges of the sinkhole, which can be vertical or gradual like the sides of a bowl, can continue to erode for days before stabilizing. Sinkholes can vary dramatically in depth, from barely a foot deep to more than 100 feet.

“When you get a large amount of water accumulating on the surface and also in the ground due to rainfall, it speeds up the movement of soil migrating into those cracks and the holes expand,” says Chopra. “That’s why an area that can appear stable when dry can collapse after a rainfall event.”

A prime condition for sinkhole activity is when normal rainfall returns following a prolonged drought. During times of drought, the lowered water level in the aquifer leaves cavities in the rock filled with air, not water. When rainfall resumes and the overlying soil becomes heavy, it’s easier for that soil to collapse into those air-filled cracks and holes.

“Population growth can increase the chance of sinkholes because when you are pumping water from the aquifer for drinking water, this changes the dynamics of how the water is behaving and interacting with the soil,” Chopra notes.

“Pumping water also accelerates the migration of soil through the cracks. Lowering the water table pushes the water down and takes more soil with it, which can increase the development of sinkholes,” he adds, noting that this can even happen when a farmer uses a large amount of water for irrigation in a short span of time, such as attempting to protect crops or trees prior to a freeze.

Another way Florida’s growing population can affect sinkhole development is increased soil surface load—both from building more structures and increased traffic on roads. Greater surface load can alter the stability of rock and soil, putting more pressure on those cavities below the surface.

“There’s really a difference between what we call ‘a sinkhole’ and a collapsed sinkhole (or ‘ground cover collapse’),” notes Chopra. “Because of the cavities in the rock, we already have sinkholes below us. A collapsed sinkhole is the visible failure of the surface, which can be catastrophic.”

One of the most recent horrifying examples of a catastrophic collapse occurred in Seffner, Florida, in February 2013. A sinkhole opened up beneath the room in the house where Jeff Bush had gone to bed.

Bush cried out for help and his brother, Jeremy, tried frantically to rescue him, but the earth had literally swallowed Bush and the room’s furnishings. His body was never recovered.

“This is the worst case scenario sinkhole. Not only was the hole deep, but the sides caved in. That’s what we call ‘catastrophic failure.’ There was no time at all for that person to be saved,” says Chopra soberly.

“When the layer of soil above the rock contains clay, that clay can become a ceiling and you never see any signs or depressions on the surface of a cavity forming underground. With a layer of sand, however, you may start to see the area begin to depress and give us an indication of activity below the surface; if there’s any ‘good’ sinkhole, it’s this kind.”

After the catastrophe in Seffner, the property was purchased by the county. Two years later, the same sinkhole reopened in that Tampa suburb. Hillsborough County is part of what is referred to as “sinkhole alley,” as that area accounts for a significant portion of Florida’s sinkhole-related insurance claims. 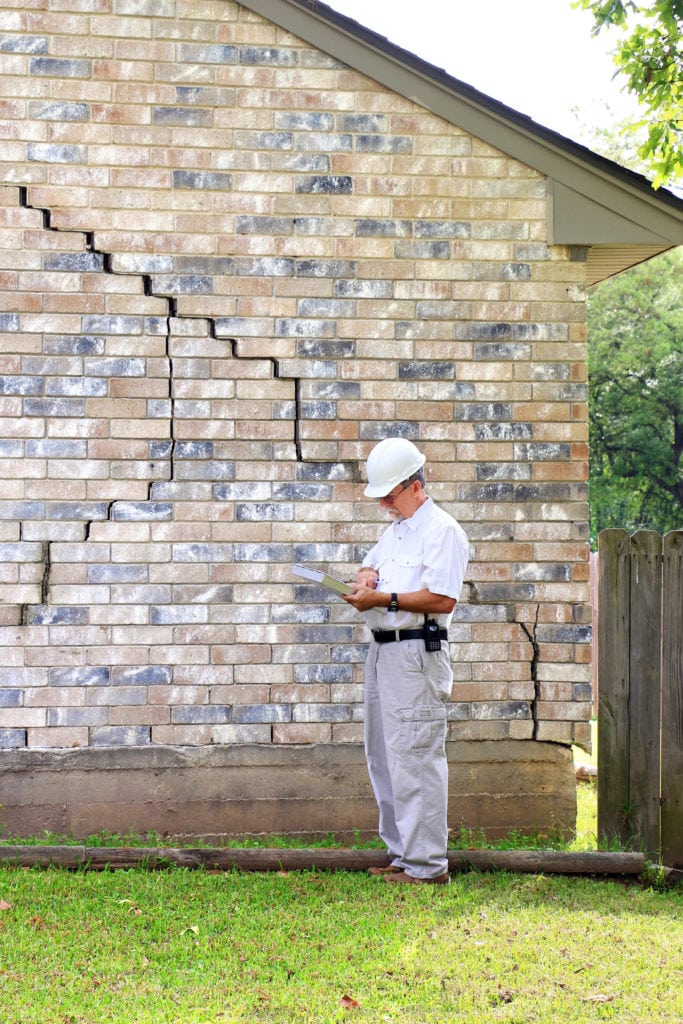 All insurance coverage for sinkhole damage is not alike, so don’t assume you’re protected if you notice settling and shifting in your home and are worried about sinkhole formation.

“I advise everyone, no matter who their carrier is, to sit down once a year and review their insurance policy, because they change,” notes Angie Lewis, a State Farm agent in Ocala.

“A ‘sinkhole’ endorsement gives you a little more proactive coverage. For example, if you notice cracking, shifting of doors, etc. in your house, you can have someone come out to do an inspection. Depending on what they find, they may order a ground boring exam from a geotechnical engineer,” she explains, adding that if the exam determines a sinkhole is developing, steps can be taken to prevent collapse. Techniques may include reinforcing the area with concrete, pins and/or plugs.

“If your policy only has ‘catastrophic ground cover collapse,’ there is no coverage until your house is at the point of having clear structural damage and is deemed unsafe to live in,” she adds. “A few years ago, some carriers changed their policies to just include ‘catastrophic ground cover collapse,’ so it’s always important to ask questions so you know exactly what’s covered.”

Lewis notes that after the law changed and mandated that all companies must offer ‘catastrophic ground cover collapse,’ many stopped offering ‘sinkhole’ endorsements. Some companies are reluctant to write policies in certain areas where sinkhole activity has taken place.

Any time you are shopping for a home, do research and find out if that area has had prior sinkhole activity. Lewis says some parts of the county do seem more prone to sinkhole formation. A seller is required by Florida statutes to inform the buyer if a sinkhole claim was ever made against the property.

“The buyer’s insurance company will require the engineering report showing that everything was fixed,” says Lewis, noting that a past sinkhole claim can limit the companies that will offer future insurance and the buyer may have to go with insurance offered by the state, which, she says is “insurance of last resort.”

The only way to be sure your property isn’t vulnerable to sinkhole formation is to avoid buying in an area with karst terrain. Since all of Florida falls into this category, owning land in Florida automatically comes with some risk.

At present, Florida has no government agency tasked with inspecting sinkholes.

A geologist or professional geotechnical engineering consultant can conduct tests using ground-penetrating radar, boring, probes and electrical resistance in an effort to identify underground cavities that might eventually collapse. However, such testing is costly and not always definitive.

“We’re trying to come up with some way to predict sinkholes, but, unfortunately, we are still a ways off from being able to do this,” says Chopra. “We are doing studies at UCF right now to determine if there’s any signal from the ground before a sinkhole actually forms.”

Should a sinkhole develop on your property, you, as the land owner, are responsible. If the hole is small, you may choose to leave it alone or fill it with clean soil/sand (nothing that can contaminate groundwater). If structures are at risk or involved, evaluation and repair may be covered by your insurance company, depending on your specific policy coverage.

When all is said and done, the potential for sinkhole formation remains part of life in the Sunshine State.