The Believe in Santa Foundation, based in Ocala, helps children statewide. 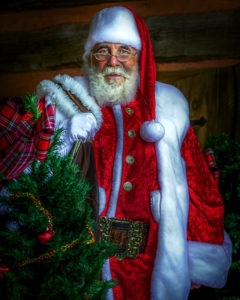 Santa Claus himself says everyone can make a difference in the lives of others. And that is the key objective of the Believe in Santa Foundation, Inc. At the all-volunteer nonprofit, the head elf is president/CEO, Keith Carson, also known as the “Minister of Merry.” The retired police officer says a serendipitous moment led to his forming the foundation. “I was on a committee putting on a really big event for underprivileged children, 400 or 500 kids,” he recalls. “In our last planning meeting the organizer got a message from Santa saying, ‘Hey, I can’t make it.’ This is six days before the event. It’s December. So panic set in. Foolishly — maybe not — I raised my hand.” Carson was so taken by the experience that he decided to put his new Santa suit to good use year-round. “As a police officer, one of the things we saw a lot at Christmas were homes in poor neighborhoods getting broken into and presents taken. These families couldn’t afford presents in the first place, let alone replace them,” he offers. “So, I decided to form a nonprofit. Our idea was to do this at Christmas, but we also help children living in poverty, disaster survivors, crime victims, those hospitalized, children of service men and women, the terminally ill. 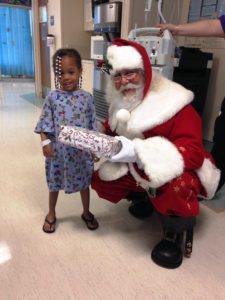 A kid can’t pick and choose when they get a terminal illness or their house burns to the ground or they end up in a hospital or a hurricane comes, so we decided we’d do it all year round.” The foundation was launched in August 2013 in South Florida. “In 2017, we moved to North Central Florida to be able to serve children in need all over the state,” says Office Manager Deborah Johnson. “We’ve gone from helping about 20 children that first year to more than 6,000 each year. COVID has sent requests through the roof, while donations to our organization have plummeted. Despite that, we’ve managed to meet the requests made to us. It’s not easy, but we operate as lean as we can.” “Everyone can help,” Carson affirms. “Whether it’s volunteering time, a monetary donation or sharing your expertise.” 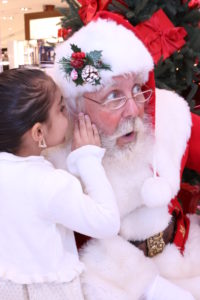 A goal for the foundation is to create a North Pole attraction in the Ocala area, which Carson says is ideal because it’s a main travel artery. He has a warehouse filled with items to stock the venue, but “I’d like to have about 10 acres of property, whether someone would donate it to us or lease it for $1 a year.” “We want children to visit and believe they were at the North Pole and met the real Santa,” Johnson notes. “We also want them to forget about whatever they’re dealing with, even if for just a short time.” A nomination must be submitted by someone associated with a nonprofit, a member of a recognized media outlet or public safety agency, or someone not related to the nominee to receive assistance. Visit believeinsanta.com or call (561) 509-5776.