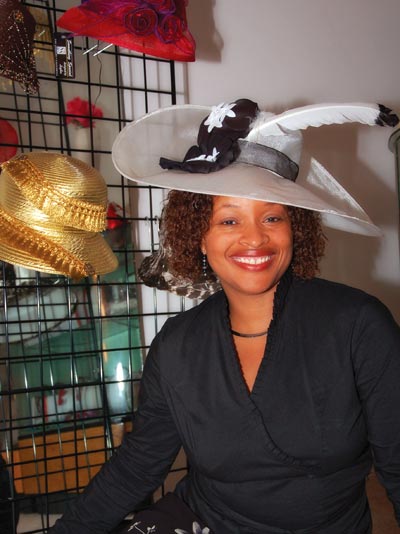 Parker’s hats range in price and style from the extravagant to the understated.

When Vonda Parker was a little girl in the small town of Courtland, Virginia, she loved watching her grandmother get ready for church. Her Grandma Hill would never even think about leaving home without covering her head.

“She wore a hat every Sunday,” remembers Vonda, “and her hat, purse, and shoes always matched.”

Her grandmother’s innate sense of style was passed down to Vonda who has always loved fashion, especially hats. She began making hats for herself in 2004 when she and her husband, Max, were living in Tallahassee. Vonda’s hat-making avocation eventually became a full-time business, and today several of her Tallahassee customers still order custom-made hats via her website.

A little more than three years ago, the couple moved to Leesburg when Max accepted a position with the Leesburg Police Department. She created her local business a short time later as word spread about her one-of-a-kind creations.

Vonda says her hat-making skills have evolved tremendously since taking a course last year by internationally known milliner Jan Wutkowski, who has created hats for movies and museums. 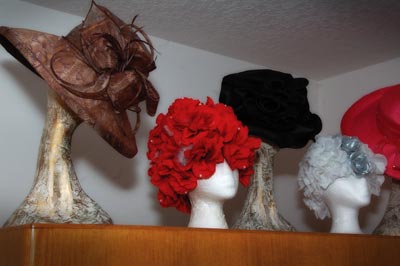 Parker’s hats range in price and style from the extravagant to the understated.

“I had been following Jan for years and admiring her custom-made hats,” says Vonda. “Since taking her class, everything I’ve made is hand-stitched, not glued.”

Vonda explains that commercially made hats are adorned by using hot glue and generally do not hold up long. As a novice hat maker, Vonda not only used glue on her first hats but also bought pre-made hat bodies.

“I wanted to go beyond that,” she says of her decision to travel to one of Wutkowski’s classes. “Jan said never to use her name if we ever used a hot-glue gun again. I’m very proud to say I honor her wishes very well.”

Indeed, Vonda’s skills have advanced and her hand stitches are so tiny that they can’t be seen with the naked eye. She also makes her own hat bodies using a variety of molds to create more than 50 different styles. The results are one-of-a-kind hats that customers can be sure no one else will ever have.

And that uniqueness is important to collector and hat aficionado Evie Benson, a customer of Vonda’s who owns a 200-hat collection that she’s been accumulating for more than 60 years.

“I never go without a hat,” says the 88-year-old Evie, who has at least four Vonda hats. “I have a small head, so Vonda is able to make them to fit me perfectly. They are also very beautiful with meticulous details.”

Vonda says that “church ladies” who grew up wearing hats are her largest clientele, but she thinks that could change.

“Lots of runway [fashion] shows have models wearing hats now,” she says. “And more ladies are realizing that hats are always good for a bad hair day.”

Early milliners were known for their haute couture styles, and Vonda is carrying on that tradition. Her showroom displays at least 15 to 20 completed hats that she designed with at least five more in various stages of production. Depending on the style, it can take between five days and two weeks to create a hat, and prices can range from $80 to $300. From simple brims with elegant adornments all the way to elaborate crystal-studded and feather-adorned caps, her styles are attention-getting as well as flattering.

“Trust me, there’s a hat for every woman no matter what her facial structure is,” says Vonda, who offers hat-wearing advice on her website. “Height definitely influences the kind of hat someone should wear.”

She explains that tall women can wear large wide brim hats, but petite women probably should stick to smaller ones.

As much as Vonda loves “getting into her zone” while making hats, she also enjoys seeing women try them on at the hat shows she hosts. Many customers book hat shows for “ladies night out” functions or special luncheons. Not only do they enjoy trying on Vonda’s hats, but they also are able to peruse a wide assortment of small purses and other accessories that she’s designed.

Vonda’s passion for helping women look their best extends to helping them do and be their best as well. She is known for her charitable work with the Haven House of Lake & Sumter County, and her hat shows often benefit the crisis intervention and emergency shelter for women.

“I saw a presentation about the Haven House at a Chamber breakfast one morning, and there wasn’t a dry eye in house,” she says. “I knew then that I wanted to help.”

With very few custom hat makers around, Vonda agrees that millinery has almost become a lost art. However, she is doing her best not only to revive it, but also to pass on her passion and skills to her three-year-old granddaughter, Zayla Jade. They “play hats” together, and Vonda often will let Zayla decorate some of the hats with flowers.

“I love to make hats because of my own grandmother,” Vonda says with a smile. “Maybe my granddaughter will remember us working together and then she’ll become a milliner, too.”