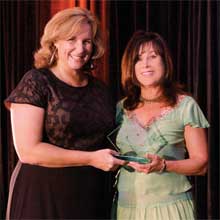 Style magazines has been celebrating another banner year. Kathy Johnson, the 2004 Florida Magazine Association Publisher of the Year, along with her dedicated staff, launched her newest endeavor, Lake & Sumter Style magazine last November. Ten months later, at the 2005 Florida Magazine Association awards in Orlando, Lake & Sumter Style was named the Best New Magazine in the state of Florida.

And Kathy’s original brainchild, Ocala Style, has continued to gain momentum since its release in 1999. A change in format in February 2004 made Ocala Style stand out above the rest. Its new, larger size certainly made an impact with the judges. This year, Style magazines was awarded nine Florida Magazine Association Awards.

“It means a lot when you’re recognized by your peers,” Art Director Trevor Byrne says. “Last year we were proud to bring home two awards; this year we received nine, including four gold Charlie awards.”

“We received more awards than any other magazine in north or central Florida,” Publisher Kathy Johnson adds. “We have a wonderful, talented staff, and it shows.”

This year’s awards run the gamut from ad design to photography to editorial. Buddy Martin’s column, “My Ocala,” was awarded an FMA for his nostalgic look at Ocala’s yesteryears. One judge commented that he could see himself sitting on a front porch with Buddy, reminiscing about the past.

Staff photographer John Jernigan received a gold Charlie award for his stunning photograph, “A Taste of History,” which captured musician Willie Green soulfully playing a guitar and harmonica at the Yearling restaurant in Cross Creek.

“I just wanted to bring in the ambiance and rustic nature of restaurant,” John says in remembering the moment he took the photograph. “It was a photo that begged to be taken.”

A professional photographer for more than two decades, John says it’s a great honor to receive an award of this caliber, but acknowledges that it’s not just his award.

“It’s the design departments award, as well. A photograph is only as good as the designer who makes it come to life. Steve Codraro did an awesome job.”

Last year, Ocala Style’s website was awarded a bronze FMA award. This year, the magazine took home the gold in that category.

“I’m proud of the fact that the website went from bronze to gold in one year,” Trevor says. “We faced very stiff competition from several of the larger cities throughout the state, especially in South Florida. It’s nice to see that we can compete with those larger markets and still come out on top.”

In addition to the content awards, two dedicated staff members also received professionalism awards for their outstanding service to the publishing industry. Craig Gillum was named Sales Manager of the Year and Lori Tani, who has been with Style magazines for 7 years, was selected as Salesperson of the Year.

“To me, it was almost unreal,” Lori recalls. “I was very honored that I would have even been considered for the award and very surprised that I was actually selected. My family was very proud of their mom. I have a lot of gratitude.”

Lori genuinely cares about her clients and says she “wants them to succeed” with their advertising. That attitude carried over into the graphic design department. Two of the three awards in the Best House Ad category were awarded to Ocala Style designers for their bold, imaginative layouts.

“I think it’s amazing what Ocala Style has achieved in the last six years,” Editor Dean Blinkhorn says. “We have a great staff with talented writers, designers, and photographers. But there are still many stories to tell.”

For Dean, as well as the rest of the Style staff, the excitement and enthusiasm felt at the 2005 FMA awards will last for quite some time.

“I was in a great mood,” Dean recalls, “and enjoyed watching the faces of our staff members who walked away with the top awards. That’s what made it a magical evening.”

Best Editorial/Commentary/Opinion
“My Ocala” by Buddy Martin
“I can see myself sitting on a porch with Buddy, shaking my head in agreement as he holds court on what’s wrong with Florida’s roads. He’s not in your face, but he still makes his points, like a fly buzzing around your strawberry shortcake that you just can’t quite catch. He writes about a national problem that has solutions, but no one is listening to Buddy, or the rest of us for that matter.”

Best Single, Original, Color Photo
“A Taste of History” by John Jernigan
“There are rare images that make me think, Man, I wish I had shot that. This is one of them. I love everything about this image.”

Best House Ad
Cricket Box
“Photo draws you in. Excellent use of color.”

Best New Magazine
Lake & Sumter Style
“Style is exactly what this magazine communicates with its clean typography, layouts, and editorial that avoid being run-of-the-mill. The larger size further sets it apart from other lifestyle titles, as does the high-quality photography.”