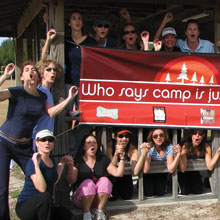 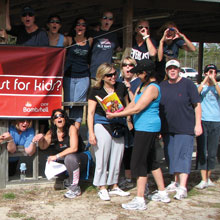 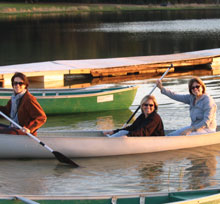 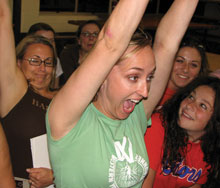 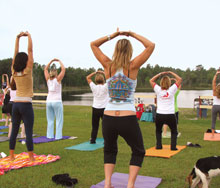 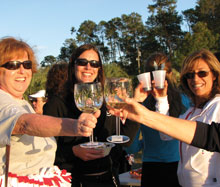 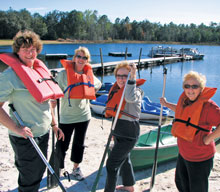 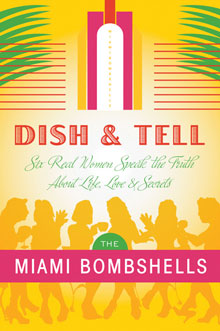 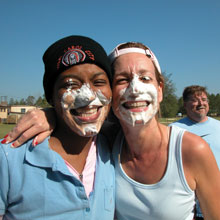 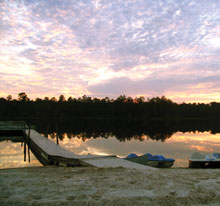 Forget “Girls Gone Wild.” Teens and college girls have absolutely nothing on the hundreds of amazing women who flock to Camp Bombshell.

The name is the first giveaway that this is no ordinary camp and these are not your typical campers. They are mothers, daughters, sisters, grandmothers, best friends, corporate career women, and stay-at-home moms. They are married, divorced, and single. They come from across the country to share, laugh, play, relax, and recharge as they put themselves at the top of their to-do lists for a change.

The Camp Bombshell concept began with the six original Miami Bombshells, a book, and a national TV appearance.

Drawn together by a mutual friend several years ago, six women in Miami began casually meeting once a month as a women’s group. They would kick back, drink a glass of wine, indulge in some good chocolate, and share what was happening in their lives. These self-described overachievers struggling to balance family, friends, and careers found their monthly “circles” were a time of revelation and release. They created a sisterhood of support and understanding and instinctively knew the appeal would stretch far beyond their own cozy circle.

So the Miami Bombshells wrote a book. Appropriately titled, Dish & Tell, it’s a spicy, emotional, hilarious, inspiring, and comforting read. Radio and television coverage brought even more exposure. The book sold well, but the greatest thing to come from publishing the book has been the creation of weekend retreats for women, called Camp Bombshell.

“The first time we were on the Today show on May 23, 2005, we talked about getting women together,” recalls Tammi Leader Fuller, one of the original six Bombshells. “We got 10,000 e-mails from women wanting some kind of getaway.”

Overwhelmed by the flood of enthusiastic responses after the book’s release, the first Camp Bombshell was held in September 2005. About 75 women attended the retreat, which was took place in the Poconos, the site of Tammi’s childhood memories. The long weekend was filled with discovery, bonding, laughter, tears, healing, and friendship, and the Bombshells knew it this was just the beginning.

In just two years, they have already hosted seven camps from Arizona to Connecticut to Florida. The next one is scheduled in Orange Springs, near Ocala, in April.

The Orange Springs Retreat site is actually a summer kids’ camp. Cabins have electricity and running water, but campers bunk together and share bathrooms. There’s not a lot of privacy, but camp attendees say that is part of what makes Camp Bombshell special. The shared space and let-your-hair-down-and-play environment lead to honest, open interaction, and lots of laughter. When was the last time you stayed up half the night giggling with girlfriends and telling stories?

“Once you get there, you just leave the rest to us,” says Tammi. “Sweatpants are required and makeup is not allowed! The beauty of this vacation is you do not have to ‘work’ on yourself. We do a lot of research to see how we can make our camps better, and 99 percent of the women have said it’s been transformational.”

Campers, who range in age from 20s to 70s, arrive on Thursday afternoon and are instructed to drop their guilt at the “guilt disposal station” on the way in and leave their cell phones behind. They’re about to discover there’s comfort in numbers and power in girlfriends. And that it’s never too late to be a kid—or a bombshell—again.

Just like kids’ camp, physical activities are planned throughout the day and campers can be as involved as they choose. Some of the activities such as the obstacle course, rock climbing wall, and the zip line, where you slip into a harness before plunging off a tower and whiz along a suspended wire, are apt metaphors for the obstacles women face every day. The difference is that here at Camp Bombshell you have a crowd of other women cheering you on.

Crazy relay races (ever rolled in a vat of Jell-O before?), arts and crafts, canoeing, sing-a-longs, lots of great food, bonfires, and Smores are all part of the fun. Zumba dancing, a high-energy aerobic and toning dance program with music and moves based on Latin dance, gets everyone moving. Facials and massages are offered for an additional fee.

Bombshell circles, where women divide into small groups to talk, are a staple of the camps.

“Many women want to share a secret with people who don’t know them or their lives,” says Tammi. “Unlike men, we don’t want to solve things. We just listen and share. It’s a chance to count your blessings and re-examine life.”

Ocala native Stephanie Rutledge heard about Camp Bombshell on the Today show. A wife and stay-at-home mother of five kids ages 3 to 18, Stephanie, 37, glanced up at the show when they mentioned getaways for over-stressed women and jotted down the Web site. When she visited the Camp Bombshell site several weeks later, she stayed on her computer for hours looking at camp photos and reading testimonials. Surprised to discover the next scheduled camp was in Orange Springs, barely 30 minutes from her home, Stephanie signed up.

“My stress level was at an all-time high. I was just overwhelmed mentally and physically,” recalls Stephanie.

Her husband, Kim, who owns Southern Charm Landscaping and Nursery, was completely supportive. So she swallowed her guilt at leaving him with all the kids, went to the camp and returned feeling energized, renewed, and filled with gratitude.

“This was redefining for Stephanie,” says Kim. “She needs to have a time that is just for her. Everybody has to have peace in their life.”

“The transformation in me was amazing,” admits Stephanie, who has attended three camps,the most recent last November. “Even though this group of women was totally different, there are still many ways we’re very much the same. The environment is one of complete and total acceptance and understanding. I left feeling how blessed my life really is.

“There are so many women who would benefit from this,” adds Stephanie, who has made it her mission to help spread the word about Camp Bombshell.

Much of the stress women face every day is self-inflicted. Camp Bombshell offers an innovative chance for redemption, an opportunity to take care of yourself as well as you normally take care of everyone around you. It’s a 72-hour respite that has proven life-changing time and again.

“We’ve raised the bar so high for ourselves,” observes Tammi, “we can never really get there. If we don’t stop putting so much pressure on ourselves, we’ll miss this time in our lives. Put yourself first for a change.”

The cost is $725 and includes all meals, activities, accommodations, an endless flow of Mad Housewife wine, and all the chocolate you can eat! Space is limited, so reserve yours early.