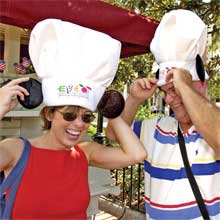 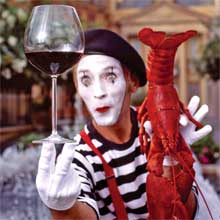 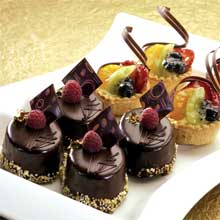 
For the past eight years, Disney has transformed the nations around its central lagoon into a celebration of a truly global scale. What began as a way for the individual pavilions to showcase items from their national menus has evolved into a six-week-long party featuring the latest wines, beers, and entrees from Disney’s finest restaurants.


This bigger-than-life buffet is an event that takes Disney officials all year to construct. Entertainers are scheduled almost a year in advance, menu items are prepared and discussed in the spring, and scheduling issues are addressed as soon as the festival is winding down — for the next year.


Imagine having a gourmet dinner at your home with the latest culinary delights, an ample supply of the finest wines, and musicians that are known worldwide. How many could you accommodate? A dozen? Two dozen? Multiply that total times 10,000 and you’ll get a rough idea of the challenges faced by the organizers of Epcot’s Food & Wine Festival, scheduled to run from Oct. 1 to Nov. 14.


For festival manager Nora Carey, who spent the last 25 years in France and was brought in due to her extensive experience in the food and beverage industry for the Hotel Ritz and the Disneyland Resort Paris, this is the opportunity of a lifetime. In Orlando since January, this is her first year as manager of the festival and she anticipates a smooth transition from the previous one.


“I don’t need to change very much,” she quickly emphasizes, “but there are so many pieces to this puzzle that it wouldn’t be possible without the enormous resources of Disney, a company with so many facets. That’s the key.”


Still, Carey has the enormous task of ensuring that the hundred or so visiting chefs from across the country, the thousands of gourmet menu items, and the hundreds of thousands of guests somehow find a friendly mix for this year’s festival. Carey recognizes that she’s the host of North America’s biggest outdoor party.


“Our festival is one of the most diverse,” she offers. “We’re always adding new levels, so that depending upon what you’re interested in, you can quickly get a glimpse — for example — of some of the indigenous foods from South Africa or China.”


Tastings are scattered around the World Showcase, with larger-than-bite size portions and wine samples ranging from $1 to $4.5o. Included in the general park admission, the weekends will offer musical performances from Survivor, the Beach Boys, Kool & the Gang, and Eddie Money, among others. Additional perks include seminars, cooking demonstrations, and celebrity hosts. Most park guests will leave Epcot with lots of new information.


“Education is a major component of the festival,” Carey says, “We continue to look for new experiences for our guests. You have to be one step ahead of the trends.”


Forecasting the hottest cuisine and the newest wines is really a full-time job. Pair that responsibility with the daily task of overseeing 17 different restaurants and a culinary staff of about 350, and you’ll begin to understand Michael LaDuke’s position.


As the executive chef of Epcot and its signature festival, LaDuke says no two days are ever alike. A Disney employee since 1988, he has quickly become one of the nation’s top chefs, inducted into the “Premier Chefs of America” in 1996 and voted “Chef of the Year” by the Orlando Restaurant Forum in 1997.


Involved with the festival since its inception, LaDuke is in his second year with Epcot. His typical day?


“It can range from tastings and menu design to just being out with the guests and the cast members, getting a feel for what’s happening,” he offers. “This is a big ship and I’m steering it.”


For this year’s festival, LaDuke sees lots of little tweaks and improvements over last year. He starts the list with the offerings during park hours around the World Showcase.


“When we look at the marketplaces every year,” he says, “we try to freshen them up to give them a different look. Of all the items, we’ll keep maybe 40% of those tasting items, and then upgrade the rest.”


In a pleasant and informative 30-minute interview, he described some of the adjustments:


• The Indian Pavilion will be new, with many curry-based offerings and a wide array of vegetarian selections. “Indian cuisine is gaining prominence in the food and beverage industry but still isn’t mainstream America,” LaDuke states. “For a lot of our guests it’s new and exciting, and that’s the goal of the festival.”


• Speaking of America, the American Pavilion will unveil a “New England Fair” concept. LaDuke expects to purchase some regional cheeses and cranberries, the latter for some tempting desserts. “We’ll tailor the menu in the United States booth to have some New England influences.”


• The Spanish Pavilion is back with a “heightened experience.”


• Samuel Adams will be back with a larger beer school and even more seminars. In fact, the brewer plans to unveil its latest creation, Chocolate Bock, in November at the Specialty Beer Garden. This special lager is brewed with Scharffen Berger chocolate for a sweet, rich finish.


• During the six weeks of the festival, there are going to be three Brewers’ Dinners, a “high-end, walk-around reception” with different Sam Adams brews paired with regional American foods.


• The Piedmont Chocolate Café, on exhibit near Italy, will offer park guests a sweet retreat. “This will be our first ever all-dessert marketplace.”


• Peru is a new participant to the festival this year. LaDuke expects to feature many regional dishes from this tiny country, including a chicken skewer dish with regional Peruvian blue potatoes. He says the exhibit will be “full of South American flavor.”


• Mexico will have a tortilla exhibit.


• All culinary demonstrations will be housed inside the Odyssey Center. “It’s certainly a more comfortable environment for the guests. It’s air-conditioned, with regular seating.”


• There will be a separate “Lunch and Learn” event on weekends, in which a celebrity chef prepares three courses in a demonstration-type atmosphere.


• And “Sweet Sundays” will involve a rotating lineup of visiting pastry chefs as they prepare sinful desserts to a live audience. Tastings will follow the presentations and the chefs may even call folks out of the audience as assistants.


“The more interactive, the better,” emphasizes LaDuke, “because the guests really enjoy that.”


But all of those improvements and additions really just serve as an impressive appetizer to the festival’s main course: Party for the Senses.


A party unlike any you’ve ever attended, Party for the Senses is a weekly, 20-chef, 20-winemaker extravaganza with special entertainment provided by memorable Cirque du Soleil cast members.


“They showed us what they’re going to do,” LaDuke reveals, “and it’s going to be really cool,” adding that the high-flying troupe will be incorporating aerial entertainers to the mix at this year’s signature event.


As a frequent visitor to the Food & Wine Festival, I can personally attest to the lavish scale of the Party for the Senses. At $95 per person, it’s not exactly cheap, but it is an all-you-can eat affair like no other. Last year, my wife and I were able to sample more than a dozen wines and just as many entrees. The overflowing dessert station proved to be my downfall, though, and I was glad that we had gotten a room at one of the nearby resorts. Neither one of us was in any condition to drive back to Ocala.


When I asked Chef LaDuke about the changes to this year’s Party for the Senses, the pace of his responses picked up considerably. It’s obviously something he takes to heart.


“For the festival this year,” he replied, “I’ll be hosting all the Party for the Senses as a chef participant. I just feel like that’s the signature event of the festival — that’s what the foodies come to see.”


He will also unveil a new décor package, enlist the help of more chefs, and utilize the entire back section of the facility. With all the improvements, he expects the guest count at Party for the Senses to jump considerably. In fact, it’s where he would be, even if he didn’t have an insider’s perspective.


“I think Party for the Senses, on top of being the coolest experience,” he says, “is the best restaurant value in town. For under $100 per person, to be able to experience 15 to 25 wines, beers, and cognacs, and 20 different food varieties…” His thought drifts off. “How often do you get to eat out at a really expensive restaurant and spend less than that? You really get a taste of the world.”