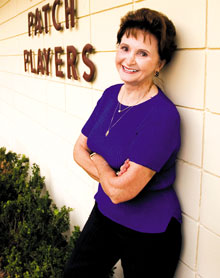 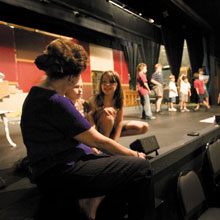 Meeting Fruitland Park resident Sue Thomas is like walking into a room filled with sunshine. You know you’re going to be warmed by your visit.

A retired educator, Sue taught school for more than 29 years, first in the classroom and then moving to reading lab coordinator and, later, a reading and language arts coordinator for the Lake County School System.

“I retired one March and made it through the end of that April before I called the school system back and admitted I wasn’t ready to quit,” she says. “I asked to go back to the classroom and taught small children for another eight years before I officially retired.”

Today, she works full time at what she loves—helping people through volunteer work.

“I believe the younger you are when you learn to give back, the more you can give in your lifetime,” Sue says with her trademark smile. “That’s why I love working with children.”

Sue believes that children are like sponges—they soak up what is good for them. She serves as a good example by teaching them to share their lives in a positive way with other people. She volunteers as the coordinator for the children’s theater program at The Melon Patch Theatre in Leesburg and as a reader for children at The Villages Elementary School. She is also a member of Hospice of Lake and Sumter and the Stephen Ministry Program at her church.

Trying to get her to talk about herself is often difficult, but ask her about one of the programs or organizations she works with and she will answer all your questions—quickly and fully.

“Currently, 488 children are being served by Hospice in Lake and Sumter counties in various ways,” Sue says. “They are seeing Hospice counselors because someone in their family is ill or has died or they’re part of weekend camps where they can spend time with children who have dealt with circumstances similar to their own.”

Sue is especially proud of a project that her grandchildren—Emily and Max Givens, ages 17 and 14, and Hannah and Haley Rouse, ages 11 and 8—are pursuing with her help.

“My younger grandchildren and I were talking about all the things being done to benefit Hospice,” Sue says. “They mentioned that there were things for women to do and things for men to do, but nothing for children to do. They decided to do something to help.”

Sue and her grandchildren organized “Children Helping Children of Hospice,” and one of their first projects was talking with The Melon Patch in Leesburg. The result of that talk was a benefit performance of the children’s production, Twas the Night Before Christmas, in December with all proceeds benefiting Hospice of Lake & Sumter.

Haley loves writing poetry and while she and her cousins were still making plans, she decided to write a poem called “Children for Hospice.” It has become a mission statement for the group:  We are children helping children, each trying to do a part, striving to help all we can, expressing love from the heart.

“These four children are hoping that this first effort will be a beginning and the project will grow in action and effort,” Sue says. “We hope there will be many spin-offs.”

Sue was recently elected executive second vice president in charge of the Patchwork productions at The Melon Patch Theatre. The December shows were the first productions with her in this position.

Originally from Senath, Mo., Sue has been in Central Florida for many years. She and her husband, Lannie, own a 35-acre horse farm in rural Lake County.

Sue also quickly points out that she is not the only volunteer in her family. Lannie is one of the sponsors of the annual “Horses for Hospice,” where riders pay to join an organized ride on a horse trail.

Lannie is also an honorary Lake County Girl Scout, which is not an easy goal for a man to achieve.

“There were two little girls who wanted to get their badges for learning the care of animals,” Sue says with a proud smile. “Lannie agreed to help them and, at the end of the year, they invited him to their banquet and presented him with the honor.”

A family of multigenerational volunteers means Lannie and Sue Thomas are very proud parents and grandparents. They seem to epitomize the familiar proverb, “Train up a child in the way he should go and when he is old, he will not depart from it.”