Dennis Yonce heads up the City of Ocala’s Office of Homeless Prevention with a hands-on and heart-guided approach.

At the tip of the spear of the city’s homeless outreach, Dennis Yonce, manager of the City of Ocala’s Office of Homeless Prevention, has a heart for the homeless. He responds 24/7 to help people in desperate situations, such as families with children living in cars.

Some of the homeless camps that dot the central Ocala area have elaborate arrangements of makeshift tents, central kitchens and outdoor facilities, and are secluded in wooded areas just a short distance behind busy roads and retail shopping areas. Yonce has contacts in the encampments, and on the streets, all developed through trust and respect. 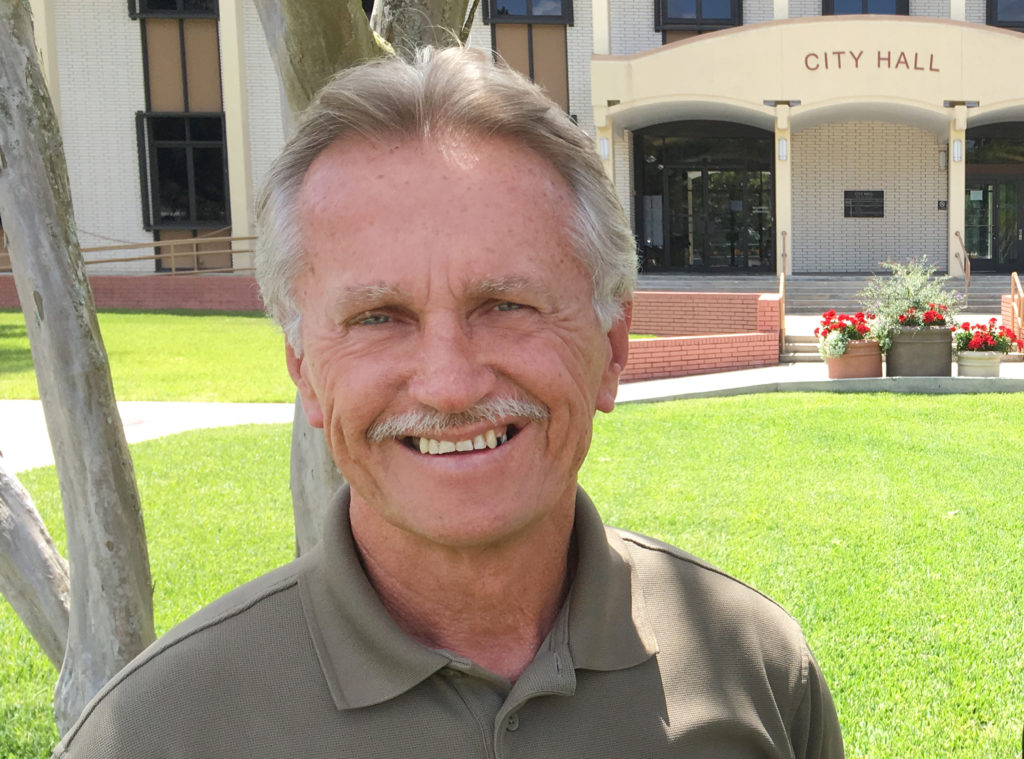 He also is a regular presence at shelters and outreaches such as the Salvation Army and Interfaith Emergency Services, and maintains contact with partners of the Continuum of Care, a group of social service providers in areas such as housing, child care, legal aid and domestic violence.

“He was the first person to start building relationships with the area homeless and connect them with us and the Continuum of Care,” says Karla Grimsley, chief executive officer of Interfaith Emergency Services. “It is a bigger challenge than you might think. For example, a person may need a job but have no identification or Social Security documents. You start to peel the layers and it’s complex.”

“We have to forget the cookie cutter approach toward helping the homeless and realize each person has a background and unique story,” Yonce offers. “You have to ask why the person is homeless, get at the cause, and match each person with the proper help, follow up and case management. It’s been eye opening, and a learning process.”

Yonce, 64, a native of Hollywood, Florida, says he has had a “passion to serve as a first responder” since his teens.

He earned his EMT certification and worked on an ambulance crew before he enlisted in the Air Force in 1976 and served until 1980. He then joined the Hollywood Police Department, where, he remarks, he saw the homeless in a different light than he had as a youth.

Yonce moved to Ocala in 1983 and joined the Ocala Police Department as a patrol officer. He attained the rank of major and became a bureau commander before he accepted the position with the city in 2016. He remains a certified reserve officer with OPD.

Yonce and his wife Darlene, married for 38 years, have two sons and two grandchildren. Darlene Yonce said his family’s safety has always been her husband’s “number one priority.”

Diane Coleman, a longtime advocate for the local homeless community, serves as manager of the Center for Life on North Pine Avenue, which is a program of Interfaith Emergency Services and helps homeless persons with health care services including medicines. She collaborates regularly with Yonce.

“The trust Dennis builds up with homeless people in the field allows us to get to know their true story,” Coleman asserts.

Yonce feels that all people, regardless of income or social standing, should be treated equally and with respect.

“Everyone deserves the chance to improve their lives but, for some, the right opportunities and resources haven’t been there,” he notes.

Yonce regularly shuttles between several motels on Silver Springs Boulevard, where he places clients and then follows up on their security and confirms that room charges are paid. He recently had seven clients in one of the locations, with some of the placements completed under COVID-19 emergency grants.

He says a mix of issues contribute to homelessness, such as mental health concerns, substance abuse, past criminal history and prior employment problems. He feels that constantly arresting people is not the long-range solution. Resolutions might involve emergency shelter, medications or mental health services, housing placement, or providing the person paid transportation back home, where there may be support that is lacking here.

Such was the case with a woman from New England who was living in a tent near Maricamp Road. She had been arrested for DUI and her vehicle was towed, impounded and sold at auction. Yonce learned she was on probation and was “scared of living on the street.” He quickly developed a plan and she was provided transportation back to her home, where she had a support network.

Yonce was “awesome and vigilant” in his help, she affirms. “He helped me at a low point and I felt empowered, I felt I had a voice. He’s a good listener and he wants to make a difference.”

The U.S. Department of Housing and Urban Development (HUD) requires that communities receiving HUD funding for homelessness intervention and prevention services conduct a yearly census of the homeless population, called the annual Point-in-Time Count, which is required for federal grant distribution. According to Marion County Homeless Council data, that census shows an average of 574 people each of the last four years who were in emergency and transitional shelters or were unsheltered.

Yonce remains concerned about high “barriers,” or rules and regulations for clients—such as curfew hours and access denied for outdated criminal records—which are put in place by some shelters, many of which are faith-based. There also has been some controversy over a city ordinance that doesn’t allow people to “lodge” or sleep and remain in a place where trespass laws might apply. He says he would like to see increased cooperation among the Continuum of Care partners and governmental agencies, especially when it comes to children in homeless situations.

“Over the years, I have seen people from all walks of life suffer in ways far beyond explanation,” he notes. “The sense of fulfillment that I have been a part of making a difference in someone’s life has been the driving force. To have been there for them, either by myself or as part of a team, has always fulfilled the inner me and drives my next step. I just follow my heart and the guidance has been right on.”

He says he does expect effort from those he tries to help and that if a person “will give effort, I’ll match it.”

“As a community,” he offers, “we can make it happen for the homeless, one person at a time.”

To learn more, visit the City of Ocala Office of Homeless Prevention website at www.ocalafl.org; the Marion County Homeless Council at www.mchcfl.org; and Interfaith Emergency Services at www.iesmarion.org