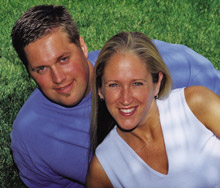 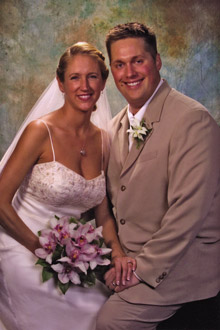 Renee and Paul Bruce had a fairytale wedding this past January 31, and they have the ultimate wedding video as a reminder of their special day.

On April 12, friends and family joined Paul and Renee to watch a special episode of The Learning Channel’s hit show, A Wedding Story.


“I’ve watched A Wedding Story since it first came on the air,” Renee says. “And when mine and Paul’s situation came together, I decided to apply. I didn’t think we’d actually be picked. The application process was very involved with several phone interviews and questionnaires. They wanted to know everything from what we’ve gone through in our relationship to our hobbies to how we met.”

The newlywed couple’s story began more than 15 years ago when Renee’s family moved from the island of St. Marteen to Ocala. Renee and Paul met in middle school at Blessed Trinity, and began dating a short time later.

“Renee was my first girlfriend and my first kiss,” Paul says. “We were typical puppy lovers. We held hands in the movie theater and ate ice cream together.”

Their relationship continued until Renee’s family relocated to Illinois. She and Paul had to say goodbye. Over the years, they grew up separately, and in time, Renee moved out on her own, traveling to San Diego. At this same time, Paul was now living in Texas.

On a trip back home to Ocala, Renee decided to look up her old flame and contacted his mom, Kathy Bruce. It just happened that Paul was in town that same weekend.

“When they met again as adults, they just picked right up where they left off,” says Cindy Secret, Renee’s Maid of Honor. “It’s like they were never apart.”

But in reality, they were a thousand miles apart.

“We did the long distance relationship in the beginning,” Renee says. “But it got hard. We were flying to see each other every two and three weeks. We just didn’t want to be apart anymore.”

Then Paul decided to take a huge step in their relationship, and asked Renee to move to Texas with him.

“I didn’t even have to think about it,” Renee says. “I knew I wanted to be with Paul.”

It was on a trip back to San Diego to help Renee pack her belongings that Paul proposed.

“There was a floating message in a bottle for me to find,” Renee says. “Before I knew what was happening, he was down on one knee. I couldn’t believe it — I just started crying.”

Renee and Paul began making their future plans together, which included a move back to Ocala. And that brings us back to the application for A Wedding Story.

“We were told that if we didn’t hear from them by two weeks before the ceremony, that we probably didn’t get picked,” Renee says. “Well, I still hadn’t heard anything by New Year’s.”

On the way to her final dress fitting, Renee decided to call the contact person at the show herself.

“I couldn’t believe it,” she says. “He told me he was happy that I called because we were chosen to be on the show.”

The crew met Renee and Paul at the Longboat Key Hilton the Thursday before the ceremony to begin filming.

“My first experience with the television crew was my personal interview that Thursday,” Renee recalls. “I’m a talker, so I thought I would have no problem.”

Renee jokes that her hour-long interview actually took over three.

“I had to start over so many times because I would either start crying or I’d stumble over my words. I thought that interview would be the easiest part, and it was actually one of the hardest.”

Paul agrees that the interview was tougher than expected.

“Mine wasn’t until Friday afternoon,” he says. “So I had a whole day to spend with the crew, getting used to the cameras. But as soon as I sat down and they put the lights on me, I got stage fright.”

Throughout the weekend, the cameramen followed the wedding party as they explored the Longboat Key area during the days before the wedding.

“I didn’t notice the cameras too much,” Bruce says. “For the most part, they were just in the background.”

When the big day finally arrived, the nerves and emotions began to show on the soon-to-be married couple. At one point, Paul’s best man brought Renee a small, gold box and a note.

“I can’t read this,” Renee said with emotion in her voice as she handed the letter to her Aunt Eileen.

You’ve had my heart since the seventh grade, she read, now you’ll have my last name, too. Paul signed the note, Love, your husband.

Inside the box was a heart-shaped, silver locket that was engraved with the couple’s initials. Renee wiped her eyes and stood up. It was time to go get married.

“I was anxious for Renee to walk down the isle, and when she did, I didn’t see her very well,” Paul recalls. “In order to get good shots of her, the cameramen got in the middle of the isle ahead of her, and I didn’t actually see her until she was right in front of me.”

Of course Paul admits it was well worth the wait.

After the wedding, the newlyweds traveled to Mexico for their honeymoon, then back home to Ocala to begin life as a married couple.

“For the longest time we didn’t know when our episode of the show would air,” Renee says. “When we finally found out it would be on in April, we were so excited.”

As luck would have it, Renee was at work when the afternoon show aired for the first time. Making a pact with Paul not to watch it until they were together, Renee set the VCR at home to record the show.

“It was so funny because all of the ladies at my work were crowded around a little television watching the show and I wasn’t allowed to see it yet,” Renee laughs. “They were oohing and aahing.”

That night, a large group of friends and loved ones gathered in the Bruces’ living room to watch the show.

“It was such an adrenalin rush to finally see it,” Renee says. “People were calling all day.”

Renee still gets tears in her eyes when she watches the show, and admits she probably always will.

“It was definitely an experience neither one of us will ever forget.”