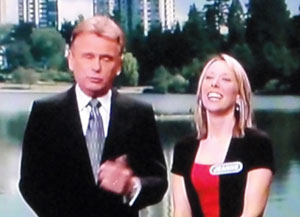 For Fruitland Park Elementary teacher Jeanne Rimes McDonald, her dream of appearing on one of her favorite game shows, Wheel of Fortune, became a reality this past May when her episode aired just before the end of the school year. In a conversation with Lake & Sumter Style, Jeanne shared details about her audition, appearing on national television, and meeting Pat Sajak.

Did you watch Wheel of Fortune growing up?
My daddy loved it. When I was younger, Jeopardy! was on at 7[pm] and Wheel of Fortune at 7:30[pm]. On a different channel it was flip-flopped. I was always amazed that he knew all the puzzles so quickly. He finally told me, “I watched it right before we sat down together.” That was always one of my best memories of him.

What was the audition process like?
They put our names on balls and drew them to play a contestant. I was one of the first called. I remember the lady saying they would send something in the mail to confirm if you were on the show. I never got anything in the mail.

Jeanne pictured with her husband, Joey, and her children, Josie, 5, and Jake, 3.

So what did you do?
I quit watching Wheel of Fortune [laughs]. Then I got a call from “Gary with the Wheel” on my answering machine. That’s how he referred to himself. He sounded “very TV.” I thought it was a friend playing a trick. Once my husband checked the caller ID, we realized it was real.

What happened next?
A FedEx box came to our door with a lot of rules. One actually said, “To avoid the muffin-top look, wear two shirts on the show.” You can’t wear black; you can’t wear white. My outfit was turning out to be very stressful. There was also a note that said, “Just because you’ve been selected, doesn’t mean you’ll appear on the show.” Apparently there’s a contestant pool should the contestants not be able to live up to their responsibilities. I even called Gary to ask him about that.

What did Gary from the Wheel say about it?
My husband will probably kill me for telling you this. I had to leave a message for Gary from the Wheel. I remember it was a hectic night. I needed to start supper, I had the kids in our big bathtub, and my husband said he had to use our bathroom to poop. I was stressed. Then I heard my husband calling from the other room, he said “Jeanne, I just pressed end call on your phone. I said I had to poop. I recorded that. Gary with the Wheel heard this entire conversation.” Well, Gary with the Wheel called back and confirmed that yes, he did hear the entire conversation. That day I learned it’s imperative to hit end call when leaving a message.

Oh no! That’s really funny! Tell me about the studio experience.
They have commercials during taping, so that’s when they’re doing your makeup, fixing your hair, telling you to speak louder. They told me to clap down. Apparently I was clapping at chest level and the mic was picking it up and blowing out the sound guy’s ears. By the way, the studio is tiny and the audience is very small. Even the wheel itself is tiny, and really heavy!

Do they allow you to practice?
You get a few spins. I injured my pinkie on the very first practice spin! You have to hold your left hand on the railing just right so you don’t tip over when spinning the wheel. I admit [that] it’s totally different in person. At home I would think, How can you not know that puzzle?

Since you had boycotted the show for a bit, did you somehow prepare for your appearance?
It was only 10 days or so between the time I was told about the taping and I was on an airplane. My husband got me the Wheel of Fortune app for my iPhone, so I did that for the six-hour flight to California.

Tell me about Pat Sajak and Vanna White.
Pat’s tiny, smaller than Vanna. Pat was super sweet, but we didn’t talk to Vanna. She would disappear behind the stage all the time. They taped six shows that day, so she would keep coming out in different gowns.

What did your kids think of seeing you on television?
All their little friends think they’re famous because I said Josie and Jake’s names on TV. We have the show on the DVR and when he watches it, Jake tells me, “Mommy, you’re so prettyful. Did you win?”

And you did! Do you remember the puzzles you won?
The first one was “It’s Highly Recommended.” This one was a prize puzzle and I won six nights and seven days in Puerto Rico. The next one was a before-and-after and it was “Kermit the Frog In My Throat.” The third was “Bobcats and Coyotes.”

Any you couldn’t solve…
…”Shredded Wheat.” I’ll never forget that. I never even saw a box of Shredded Wheat until I got to Publix after the show was taped. I about kicked it over [laughs].

What do you plan on doing with the money?
I should have a great answer for this question, but really I want some new shutters for the house, some pavers, and a new washer and dryer. Boring, I know.

Any other TV shows you want to try out for? Maybe we’ll see you on Survivor soon?
No, I think I’m done [laughs].

If you’re ever on the show, remeber these 4 tips from former contestant Chad Mosher.

1. ALWAYS BUY A VOWEL—This is really less of a risk than picking a consonant, and by the time you purchase all available vowels, many important parts of the puzzle are revealed and you can now start tactically picking your consonants.

2. PICK YOUR CONSONANTS WISELY—Sure, take the most common consonants (L, N, R, S, and T) at the start of a blank puzzle. But once you know the solution, pick your consonants advantageously to maximize your winnings.

3. MONEY MATTERS—If you want to go to the bonus round, you need to have the most money. Sometimes that means taking a risk or two and letting the wheel spin a few more times.

4. USE THE USED-LETTER BOARD—Some viewers aren’t aware that to the left of the puzzle board, the contestants have a board that shows them what letters have been called and which ones haven’t.