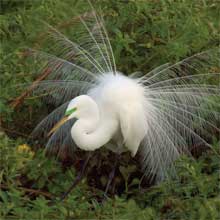 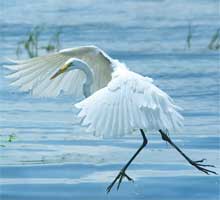 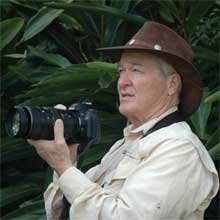 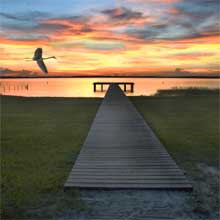 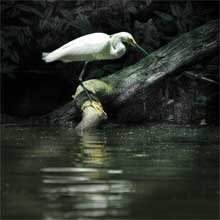 Wildlife photographer Don Browning’s profession involves more than just taking pretty pictures. It’s about celebrating the community of nature, about man’s role as both citizen and steward of that community.

Browning’s art and convictions have converged into what has become his signature work — the photographing and preservation of Florida’s wading birds. Since 1998, Browning has focused his camera lens primarily on the heron and egret population of Lake Weir’s Treasure Island. The result of that dedication has yielded both protective legislation for the birds and a stunning collection of photos.

The latter — Florida’s Wading Birds: A Legacy for the Future — is currently a one-man photo exhibit on display at the Heritage Gallery in Tallahassee runs through April 16. It includes 50 of Browning’s up-close-and-personal photos of the fascinating world of a wading bird rookery.

There’s a reason that the exhibit is making its debut in Tallahassee. If not for Browning and a community of concerned citizens and legislators, there would likely no longer be a wading bird colony on Treasure Island.

With Browning’s photographic record of the birds’ endangered population spearheading the conservation effort, a bill was sponsored by Representative Dennis Baxley in the House and Senator Anna Cowin in the Senate. Signed into law by Governor Jeb Bush in 2001, the Sunset Harbor Wading Bird Rookery Rescue Bill provided for a 500-foot buffer around the island from high speed boating intrusion.

“It took a community to save a community,” notes Browning, who lives on Lake Weir within a half-mile of Treasure Island.

The photo exhibit is a celebration of the now-thriving wading bird colony. There’s a Great Blue Heron family, among the first to be photographed by Browning. With the parents dubbed Romeo and Juliet and their chicks named Mutt and Jeff, they became the poster birds of the conservation mission.

It’s a role befitting the largest of the herons, which appear to be all knees and elbows like gawky teenagers. But they are skilled fishermen and aerodynamic wonders. Once airborne, their bluish-gray bodies resemble streamlined missiles and their wingspan can easily exceed six feet while in flight. The Great Blue Heron shares the stage with equally eye-catching photos of Little Blue Herons, Tricolored Herons, and Green Herons.

Also depicted in the expansive exhibit are the Great Egret and Snowy Egret — showy, snow-white birds that seemingly love the camera. Picture after picture, these dramatic birds appear to be putting on a performance just for Browning’s sake. Perched on a tree branch, a green-masked, golden-beaked Great Egret with his startling-white breeding plumage in full splendor appears to be ready to attend a masquerade ball. Nearby, another Great Egret is performing a delightfully impossible walk-on- water ballet.

Perhaps the most telling picture of the rookery’s healthy environment is one of a Snowy Egret and a Little Blue Heron perched side by side on a branch. In this world, “birds of a feather flock together” is more than just a catchy phrase. While egrets and herons do co-exist in a rookery, it is highly unusual for these two birds to tolerate each other in such proximity.

Browning is particularly fond of that picture.

“I think it shows,” he says. “that all creatures — man included — all are part of the fabric of nature.”

That thread of connection to nature and photography began for Browning in his childhood. Born in St. Louis, Browning was 11 when his uncle built a darkroom in the basement of the family home. He’s been taking pictures ever since.

“My earliest mentor was Ansel Adams,” says Browning, now 63. “I studied all his pictures, all his books. There were a lot of good photographers, but he was the only one who brought together the art and the technical aspects. And his large-format, black-and-white shots of nature intrigued me. I adopted the format as well.”

Browning even took pictures for many years using the box cameras of Adams’ era. He would sit the big box camera on a tripod, line up his shot, pull the cloth over his head, and click away.

At 17, Browning joined the U.S. Navy. It would provide his next great influence. While stationed in Yokouska, Japan, for nearly three years, Browning gained uncommon access to that culture.

“Because I could speak Japanese, I was allowed in places most foreigners were not,” he explains. “The Asian culture has a tremendous respect for nature, especially birds like herons and cranes. Their paintings incorporate mountains, waterfalls, clouds, and birds. Each element represents qualities like honor, trust, integrity. I began to do the same with my photography while I was there.”

When he left the Navy and returned to the United States, Browning carried his worldly experiences with him to Central Missouri University. It was also while attending college that he met future wife, Leslie; the couple has been married for 40 years now. Leslie and daughter Jennifer are both pottery artists. Son-in-law Chris, eight-year-old granddaughter Katherine, and Sailor, a 5-year-old Golden retriever, round out the present family.

“We moved to the Orlando area in 1972, founded my medical business forms and systems company, and stayed there until 1998,” Browning recalls. “That’s when I discovered Lake Weir.”

It’s only fitting that Browning discovered Lake Weir via air and water.

“I owned property in Leeward Air Ranch and had flying buddies who lived there,” he recounts. “One day, I flew over Lake Weir and it just grabbed my attention. First chance I got, I trailered my boat over and went around the lake, writing down numbers on the real estate signs in front of property for sale.”

As he made his way around the lake, Browning used his cell phone to call the realtors listed on the signs. By the time he docked the boat, he had property lined up to see. Shortly thereafter, the family was moving into a lakefront home within yards of Treasure Island.

“I didn’t even know about the rookery when we bought the house,” says Browning. “Soon I began observing the comings and goings of the birds. Then I was appalled to see the havoc being caused. Some of the airboaters approach the island at a very high rate of speed, scattering the birds every which way. I don’t think they realized what damage they were doing to the birds’ environment.”

The disruption was destroying the birds’ habitat and life cycle. Startled birds would take flight again and again, damaging their eggs and becoming dangerously exhausted. Unable to sit and watch the destruction passively, Browning picked up his camera and thus began the successful grassroots conservation mission. It also led to Browning being invited by President George W. Bush to the White House for the 2004 Earth Day. Then, the Marion County Chamber of Commerce presented Browning with the 2005 Walt Driggers Environmentalist of the Year Award.

His current Lake Weir home is a little farther away from Treasure Island than his first, but is still only a 10-minute pontoon boat ride away. On his boat deck Browning mounts an eight-inch Celestron spotting telescope, rests his camera atop that and clicks away. He uses a tripod if he wants to shoot the birds looking up and a ladder if he wants to shoot down.

“Because of the large format size I shoot, long lenses are the key,” says Browning, whose first major photo exhibit in 1999 was entitled Lakes and Rivers of Florida. “I use Nikon digital cameras and lenses. Although I still have my old box cameras.”

It was the birds that made Browning switch from mainly shooting in black and white to color. And it was environmental concerns that had him abandon processing his own film and embrace the digital camera.

“I couldn’t resist all the beautiful colors of nature. I had to shoot in color,” he says. “And I didn’t want to pollute the water system with processing chemicals. When I do shoot in film, I use a commercial processing lab.”

The birds and the season dictate the shooting schedule. Once he picks out his spot, Browning will just relax and “let the birds tell their story.” He uses notes to complement his photos, showing every aspect of the birds’ life from mating and nest building to hatching and raising the young.

“One of the best things to watch is the young birds learning to fly,” says Browning, then adding with a laugh, “or I should say learning to land. They pick up the flying part pretty easy, but there are a lot of crash landings before they get the hang of it.”

Browning also incorporates many other elements of the birds’ environment into his photos. Not far from a heron fishing from the bank is a lurking alligator. Or camouflaged in the underbrush behind an egret are several different varieties of snakes. And a turtle can be seen peeking out from the very same hollow log that two birds have landed on. His photo collection also includes many other birds that are residents of the Lake Weir habitat: osprey, hawks, eagles, and wood ducks.

Reveling in all of it, Browning never fails to find new joy – and new responsibilities — in nature.

“This is our time to preserve these treasures and pass them on to future generations,” he says. “All life survives one generation at a time.”