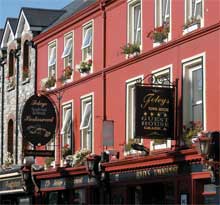 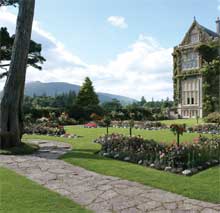 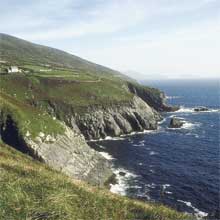 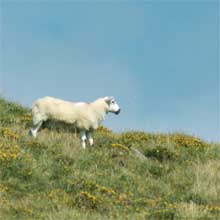 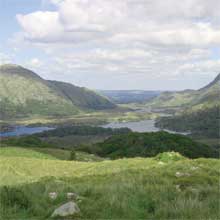 I knew someday we would travel to Ireland. We had talked about the places we would visit there — the seaside cliffs with their breathtaking views, the lyrically named towns and mountains, the pubs where we could taste Irish whisky in its native land. I wanted to set my own eyes on those forty fabulous greens of Erin and I wanted to kiss the Blarney Stone. And I wanted, most of all, to glimpse the land that had provided me with an important part of my heritage.

Steve, I think, just wanted to see what all the fuss was about.

Well, last spring we decided it was time. Some good friends were already planning a trip to Ireland and encouraged us to come along. We made our reservations for late summer.

Over the next few months, whenever I could, I browsed the Internet for information on places we would be visiting. I often caught myself humming that tune about going across the sea.

Dublin is a beautiful city, dotted with manicured parks filled with flowers and people. We learned that it is one of Europe’s smallest capitals and that it is possible to see all of its major sites on a daylong walking tour.

The tour began with a leisurely drive through the city to orient us a bit. Mid-morning, we made our first stop at Dublin Castle. Although the castle dates from 1204, only a tower survives from those Norman times. Its main feature is a lavish set of State Apartments, which were designed as quarters for the English Viceroys who once ruled Ireland. Today, the facilities are used for government functions.

Next we visited the Jameson Whisky Distillery for a look at how Irish whisky is made and a sample of the result. Then it was on to the highlight of our Dublin adventures, Trinity College.

Founded in the late 16th century, Trinity is Ireland’s most revered educational institution. Though it was originally open only to the sons of wealthy Protestant families, today women and men of many religious traditions make up the student body.

The old library is filled with books and historic memorabilia. The highlight of a visit here is the chance to see glass-enclosed pages from the Book of Kells, an illuminated copy of the four gospels written and decorated by Irish monks in Scotland in the 8th century. It was taken for safekeeping to Kells during Viking raids early in the 9th century, hence its name. The crowds are a bit daunting, but eventually you do get to the cases for an up-close look at the intricately decorated pages, considered to be the supreme achievement of Irish Celtic art.

The rest of the day we were on our own, and we decided to do a bit of walking. We strolled through St. Stephen’s Green, located not too far from Trinity College, and admired the well-manicured gardens. We all were struck at how clean and orderly everything was. The grounds were filled with glorious flowers and with Dubliners enjoying the fresh air.

It began to rain after a while, and we decided to take a cab back to our hotel for a little rest before the evening’s excitement. Around six o’clock, our tour coach (a luxurious, brand-new Mercedes tour coach, by the way) took us to Jurys Irish Cabaret, just a few minutes from our hotel. It was billed as an evening of “authentic Irish entertainment.”

The dinner show is a lively program of song and Riverdance-type dancing and storytelling. The people on stage are talented, consummate professionals. The cabaret is one of those must-sees when you visit Dublin, and we thoroughly enjoyed the experience.

The next morning, we boarded our comfortable coach, left Dublin behind, and headed southeast toward Kildare.

Deidre Byrne, our very capable and personable tour director, was born in Ireland and seemed to know every nook and cranny of the place. She has been a tour guide in her native land for many years, and in her gentle brogue she provided much more than brief orientations to places and history. She helped us understand her country’s often-heartbreaking past and see its hopeful future through the eyes of its people.

On that morning drive to Kildare, Deidre gave us a preview of what was ahead. Over the next few days, we would savor breathtaking panoramas of lakes and mountains, drive along Ireland’s rugged southwest coast, tour ancient castles, and visit charming towns of brightly painted houses and friendly people.

Our first stop that morning was at the Irish National Stud, near Kildare. Horses are as big in this part of Ireland as they are in Marion County, and the Irish Stud is home to many of the country’s greatest Thoroughbreds. The farm and the horses are beautiful, but perhaps this particular stop was a little less special for us than the others, considering we see magnificent horses at home every day.

Adjacent to the National Stud facilities are remarkable Japanese Gardens. The century-old, carefully preserved gardens are laid out to represent the life of man. Visitors follow the paths up and down hills and over bridges, representing the Path of Life from cradle to grave. It’s really quite beautiful.

From Kildare, our tour continued southwestward toward Tipperary and Cashel. I had read about the Rock of Cashel, but nothing can really prepare you for the sight of it! Its building’s ruins sit atop a more than 200-foot-high limestone outcropping that rises dramatically from the Tipperary Plains, dwarfing the homes in the town below.

It’s thought that the spot was originally used by the Druids for worship, but by the 4th century it was the seat for the Kings of Munster. According to legend, St. Patrick baptized King Aengus at this site, and it was granted to the church at the beginning of the 12th century.

It has been abandoned for more than a century and a half, but there was an eerie presence there that quiet summer afternoon. It was easy to imagine centuries of ghosts watching visitors make their way among the building’s ruins and tombstones.

After lunch at a small pub, we re-boarded our coach and headed toward Killarney.

We arrived in Kerry mid-afternoon and spent our time before dinner walking the colorful streets in Killarney, appreciating the flowers and browsing in the bustling shops. We thought we might go to a pub after our meal, but it had been a long, lovely day and we decided to turn in early. We knew the next day would be a memorable one.

Our first stop after we left our hotel the next morning was at a spot that looked down on Killarney’s famous lakes. It was a breathtaking panorama!

Long fingers of land reach out into the Atlantic along Ireland’s southwest coast. The Iveragh Peninsula, the largest of those digits, is ringed along the coast by a scenic road, called the Ring of Kerry, situated between the dramatic Atlantic coastline and Ireland’s highest mountains. It is easily the most traveled route in the country.

As we looked out over the water, Deidre called our attention to a parallel finger of land just to our north and told us we were looking at the Dingle Peninsula, where the movies Far and Away and Ryan’s Daughter had been made.

A little later, someone asked Deidre about the unusual, color-spotted sheep that dotted the mountainsides. She merrily explained it was simply the Irish equivalent of branding. Owners used different colors of spray paint and could spot their own herd’s members from many miles away.

Amid all the beautiful scenery of the peninsula, however, we also saw many remnants of Ireland’s worst tragedy, the potato famine of the mid-1800s. The mud-and-stone cottages, abandoned and forlorn, are reminders of that terrible time in Irish history when half the population died of starvation or was forced to leave their homeland.

Our final stop in the area was a visit to the Muckross House, a stately Victorian home built in 1843 for English gentry. Its setting on the shores of a lake in Killarney National Park is serene, the gardens idyllic.

The next day, we forged on to Blarney Castle in County Cork, another of Ireland’s most popular visitor stops. Many wanted to kiss the Blarney Stone to obtain the promised gift of eloquence. I had thought I did too, but when I realized that getting to the aforementioned stone requires a walk up a hundred or more narrow, spiraling stone steps, I decided I was quite eloquent enough, thank you.

Steve went up to the top with some of our traveling companions, though, in order to get photos of the awkward upside-down, stone-kissing ritual. He came down in time to join me for a stroll along the streets of Blarney, with lunch and a bit of shopping mixed in.

Later that day, it was on to Waterford, where we spent a fascinating few hours at the Waterford Crystal factory, where we couldn’t resist doing a bit more shopping. It’s really a fascinating operation and we were amazed at the variety of items designed and created there, including the crystal ball that would drop in Times Square on New Year’s Eve.

The next morning, we traveled to Wexford to catch the ferry that would take us (and our tour bus!) across the Irish Sea to England and Wales. That, of course, is another story.

It had been a whirlwind week in Ireland, and we were amazed at how much we saw and experienced in that short time. It’s a beautiful land, rich in history and mystery, and I want to return some day to see some of the other places I’ve heard about for so long.

I still find myself humming that childhood song, but after glimpsing the glory of Ireland, the closing words of the anthem hold the most meaning: “If there’s going to be a life hereafter / And somehow I am sure there’s going to be / I will ask my God to let me make my heaven / In that dear land across the Irish sea.”

Many itineraries are available through CIE Tours, ranging from the five-day Irish Fling to 15-day coach tours that include legs in England and Scotland. Stop by Ocala Travel or call April Powell at 732-7511 for the company’s newest brochures, or visit the CIE website at cietours.com.