A breast cancer diagnosis is the beginning of a life-changing journey marked by many twists and turns. Along the way, women have to make many decisions about their care and treatment. For some, this includes undergoing a mastectomy. The next decision a woman, along with her family and a team of doctors, then faces is what to do after the mastectomy.

Four Ocala women who have taken this journey were kind enough to share their personal stories with Ocala Style. 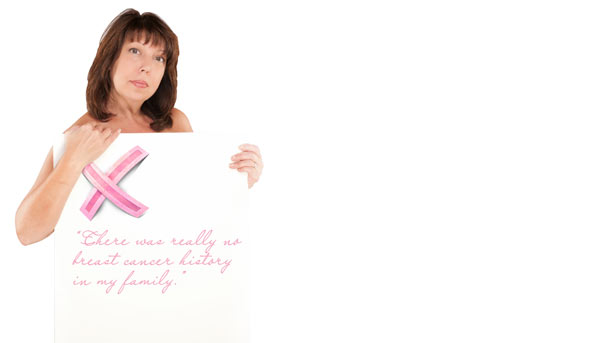 When Roberta Del Toro’s breast cancer surgery went from a lumpectomy to a mastectomy, she had to make an unexpected decision.

“I was already in a state of shock with the cancer diagnosis,” says Roberta, a hairstylist who co-owns Ocala-based Neon Hair Salon. “But now that I was going to have to have a mastectomy, I also had to decide the best option to replace my right breast. I felt like I was caught in some surreal whirlwind.”

Roberta’s somewhat out-of-body experience began with her annual mammogram in November 2007. Much to her surprise, the test detected something abnormal in her right breast.

“There was really no breast cancer history in my family,” recalls Roberta. “When my doctor told me it was stage I breast cancer, I was stunned.”

But because Roberta’s tumor was a pea-sized one located behind her right breast nipple, a lumpectomy would be possible. Then, the results of an MRI came in and everything changed.

“The MRI showed a speck way back against the chest wall,” she says. “The doctors didn’t want to take any chances. The best way to take care of it was with a mastectomy. I agreed because I just wanted the cancer all gone.”

Looking at her breast replacement options following the mastectomy, Roberta chose TRAM flap reconstruction, which uses a person’s tissue from their lower abdominal area to reconstruct the breast.

“I just wanted my breast to be as natural as possible and to match the other one,” says Roberta.

Two weeks after her initial breast cancer diagnosis, Roberta underwent surgery. Dr. Jamie Daniels performed the mastectomy, and Ocala Plastic Surgery’s Dr. Navinderdeep Nijher immediately did the breast reconstruction surgery. Because of the abdominal surgery, Dr. Nijher also had to create a new belly button for Roberta, as well as reconstruct her nipple. Later, she would get a nipple tattoo.

Roberta began taking Tamoxifen, an estrogen-suppressing drug, two months after the surgery. She had regular checkups every four months at first and then every six months with Dr. Craig Reynolds of Ocala Oncology. This November will mark her five-year anniversary of being cancer-free.

As for her reconstructed breast, Roberta, now 53, says, “It looks as good as it possibly can, and I’m happy I chose the option of reconstruction that I did.”

“Around the pool and at the beach, I wear a bikini,” says Roberta. 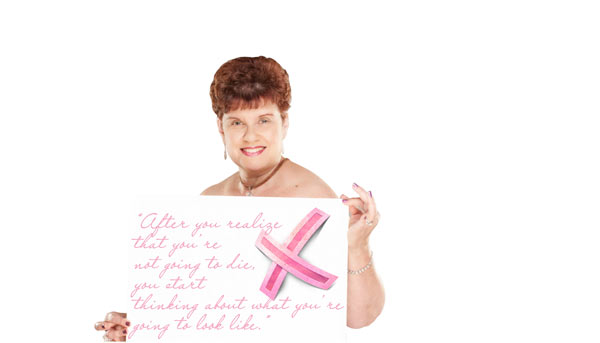 For Judi Siegal, the results of her June 2008 mammogram was a bit of déjà vu. The scan detected the presence of ductal carcinoma in situ (DCIS) in her left breast. Some 15 years earlier, Judi was diagnosed with DCIS, or Stage 0 breast cancer, in her right breast. DCIS is an uncontrolled growth of cells within the breast ducts and is considered noninvasive. But DCIS can be a precursor to invasive cancer, and women who receive the diagnosis should take medical action.

“I had had a lumpectomy and localized radiation before,” says Judi. “I thought that would be the case this time around, too.”

But when the MRI results came back, more DCIS lesions were detected on the other side of the left breast. Judi, who was 61 at the time, now considered different options.

“I talked it over with my surgeon, Dr. Jamie Daniel, and she recommended a mastectomy of the left breast,” says Judi. “I wanted to be around for my family. And after you realize that you’re not going to die, then you start thinking about what you’re going to look like.”

Judi decided to go with two-stage delayed reconstruction with an implant. Immediately following the mastectomy, a balloon-like tissue expander is surgically placed under the skin and chest muscle. Then, over the span of three to four months, a saline solution is injected to slowly stretch the skin before the breast implant is placed.

“I left the hospital the day after the mastectomy with a golf ball-sized lump (the expander) on my left side,” recalls Judi. “After I had healed, about six weeks later, we started what I would call my puff-up sessions to get the saline solution injected.”

While a small complication left Judi a little behind schedule to receive her breast implant, she was happy when she finally had that surgery in February 2009. She decided not to get an artificial nipple or even a nipple tattoo, saying she just “didn’t feel that was necessary at this stage of my life.” But Judi has no doubt, despite the complication, that she made the right decision with the reconstructive surgery that she chose.

“I’m very glad that I went with the breast implant because it was important for my emotional well-being,” says Judi, who didn’t have to have any follow-up radiation or chemo and is now cancer free. “Every woman has to make the decision that’s right for her.”

As she got older and her body changed over the next several years, Judi decided to get a little additional breast support. But this time, no surgery was involved.

“My friend Shirley Gottfried, who’s a board-certified mastectomy bra fitter with Unique Lingerie, talked me into coming in for a fitting just to give me a little added lift,” says Judi. “I left there feeling beautiful.” 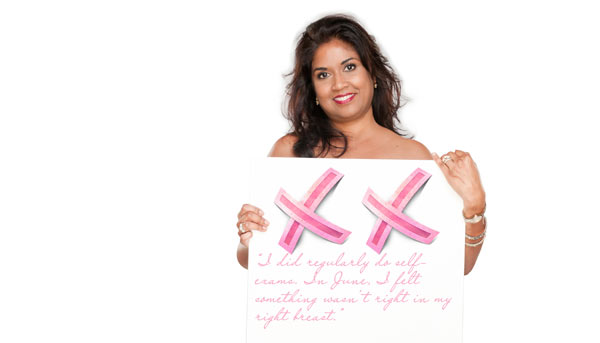 As far as Vashti Nugent is concerned, she was in the right place at the right time when the wrong thing happened. A registered nurse involved in the medical field for 23 years, Vashti missed her annual mammogram in early 2009.

“It was a very busy time with my family and work,” says Vashti, 43 at the time. “But I did regularly do self-exams. In June, I felt something wasn’t right in my right breast. I didn’t worry about it too much and decided to go through another menstrual cycle. By July, the lumps were still there and I was feeling heat in my breast.”

That’s when Vashti decided to say something to Dr. James Rogers, with whom she has worked with for nearly 20 years at Ocala Plastic Surgery. Dr. Rogers told her to immediately schedule a mammogram.

“The mammogram results looked very suspicious,” recalls Vashti. “Then, I had a needle biopsy and an MRI. Two days later, Dr. Rogers told me I had stage 4 metastatic breast cancer. For a moment, the whole world stopped.”

She and her husband met with Dr. Charles Neustein of Ocala Surgical Associates to discuss her surgical options. It was a short discussion.

“I surprised Dr. Neustein when I told him right away that I wanted a double mastectomy. I didn’t want to worry about the cancer in the future,” says Vashti.

Vashti also chose the one-stage immediate breast reconstruction surgery, which was done as soon as the mastectomy was completed.

“And, of course, Dr. Rogers did my reconstruction surgery,” says Vashti, who had the double mastectomy in July 2009. “After staying in the hospital two nights, I went home with a chest full of drains. I had to learn to ask for help. I was fortunate that there were plenty of people willing to help.”

Vashti’s support network would prove to be invaluable when she received more disturbing news. Just two weeks after the double mastectomy, a PET scan showed the cancer had spread to six places in her spine. She would have to have chemotherapy and radiation treatments, both of which she remarkably underwent while going back to work three weeks after the mastectomy.

“I had radiation twice a day for six weeks,” recalls Vashti. “I would go for my first treatment at 7:30am and then go to work. Then, I’d have my second treatment at 4pm and go home. The chemo treatments were once every four weeks for two and a half years; now it’s every three months. I schedule the chemo for Friday afternoons, which gives me the weekends to recover.”

For Vashti, life is good. While she continues treatment for the bone cancer, the breast cancer went into remission in January 2011.

“I live every day to the fullest and appreciate all the amazing people who have supported me through all of this,” says Vashti. 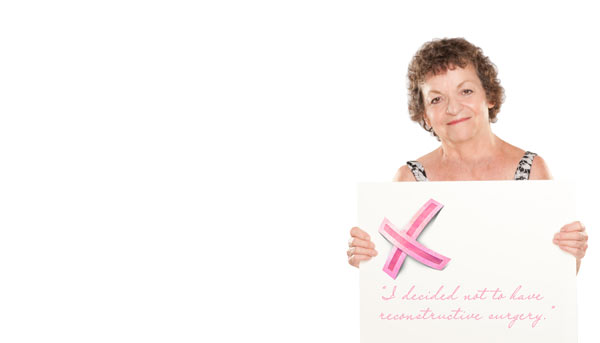 “I was about to leave for a cruise, and I called an aunt to say good-bye,” recalls Diane, a retired licensed practical nurse. “She told me that she’d had a mammogram and a suspicious lump had shown up. She was going to have surgery.”

Diane, who was 68 at the time, realized she hadn’t had a mammogram in years. She made a mental note to schedule one soon.

“As it turned out, my aunt had a cyst and was fine,” says Diane. “But I decided to go ahead and have a mammogram just to be safe. That was in April 2006, and it’s a good thing I did.”

While the mammogram showed no discernible lump in either breast, there was an area of concern in Diane’s right breast. A biopsy came back positive for breast cancer. A PET scan showed that the cancer was localized and a lumpectomy was scheduled.

“The doctor removed 19 cancerous lymph nodes,” says Diane. “I was relieved that it was over. But then the day before I was going to be discharged from the hospital, the doctor came in with bad news. More tests had shown that the cancer was more widespread than they thought at first.

Before she left the hospital, Diane had to make the decision to have a mastectomy of her right breast. She went home to recover and later met with Dr. Stanley De Turris of Surgical Group of Gainesville, who would perform the mastectomy. Diane also met with a plastic surgeon to discuss reconstructive surgery.

“I had to have the mastectomy,” says Diane, “but the reconstruction surgery was an option. After talking to the plastic surgeon, I decided not to have reconstructive surgery. I just didn’t want to have another surgery.”

Two weeks after her lumpectomy, Diane had the mastectomy. Under the care of Gainesville oncologist Dr. Robert Carroll, Diane underwent chemotherapy twice a week for three months. She decided against radiation therapy.

“Of course, all my hair fell out, even my eyebrows and eyelashes,” says Diane. “I went to All About You and bought a wig because I was going on a cruise when I finished the chemo. But I felt like a phony, so I went on the cruise bald and had a great time.”

At Ocala-based All About You, Diane was also fitted with her first mastectomy prosthesis bra.

“They did a great job,” says Diane. “I’ve always been very particular about my bras even before the mastectomy.”

Two years later when Unique Lingerie conveniently opened near Diane’s home in On Top of the World, she visited and was refitted with a new prosthesis bra.

“There have been so many advances in the bras,” says Diane. “They are so much more comfortable, and there are so many more choices.”

As with most women who have dealt with cancer, Diane, now 74 and cancer-free, says that “you have to talk to others who have had the experience.” Diane believes “it’s important to get support and then offer support when it’s your turn.”