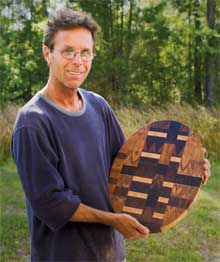 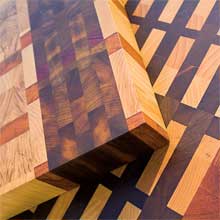 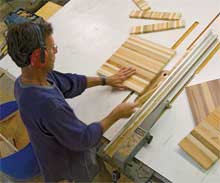 Matt Fortin was one of those kids that teachers sent home with the note: Doesn’t follow directions well. It wasn’t that Fortin was being deliberately difficult or contrary. It’s just that he knew where he was going and he had his own set of directions to get there. Fortin would turn in his math problems with the correct answers, sans the required formulas that showed how he got those answers. Another note sent home.

“I saw the solutions in my head,” says Fortin. “I didn’t see why it was necessary to clutter the process up by writing down a formula that I didn’t need to use.”

Not surprisingly, Fortin’s creative mind led him to follow the beat of his own drum. He didn’t need college to map out a career. He knew early on that he wanted to make things, specifically, things with wood. Looking at a piece of wood, he could see in his mind what to do. He didn’t need a college course to show him how to do that. What he needed was opportunity and experience.

Forgoing college, Fortin got what he needed in the ensuing decades of employment in the construction business.

“Working on building custom designed homes was the best classroom for me,” he says. “It gave me a chance to develop my skills while being creative at the same time.”

And when the workday ended, Fortin’s creativity continued. He’d gather up discarded pieces of wood from the construction sites and take them home to build end tables and coffee tables. In 1986, Fortin went to work for Adolf Construction saying the six-year stint was “a very creative atmosphere that led me to being able to begin to do custom woodwork on my own.”

Fortin began operating his own shop in 1993, developing his talents to the highest level in the woodworking field. In today’s world of disposable, some-assembly-required products, Fortin is an artisan who creates custom handcrafted art in wood. It could be a coffee table or a wall unit or a desk. Maybe a room divider or kitchen cabinets. Whatever it is that Fortin creates, rest assured it will be one of a kind. Fortin’s medium just happens to be wood.

Fortin’s Ocala-based workshop is filled with wood, the physical presence of it, and the rich earthy smell of it. From ceiling to floor in the 3,000-foot square shop, wood is literally everywhere. Stacked high against the walls are shelves of wood, mostly organized by size with the heftiest boards at the very top. There’s more wood in bins, some in various stages of being worked with on tabletops. They are of a wide variety of hue, texture, and grain. Even among those of the same species, there are minute differences. There are easily recognizable woods — oak, maple, cherry, walnut and mahogany — but mixed in are exotic woods such as imbuia, purple heart, and granidilo. Definitely no pressboard found here.

If wood is the star of the workshop, then the myriad of tools needed to shape the raw product is the supporting cast. Woodworking tools fall into several categories: cutting, shaping, measuring, assembly, and finishing. Think saws, routers, gauges, levels, rasps, knives, drills, sandpaper, spray guns, jointers, drill bits, clamps. Multiply that by many different types of each of these items and Santa’s elves would have a field day.

It’s a two-man shop — Fortin and longtime family friend Chris “Hoss” Gulick serving as his assistant. The bulk of the work is done on two main workstations, but there are several auxiliary benches that can be utilized. Brush away some of the ubiquitous sawdust on any of the work areas and you’re likely to find some penciled calculations, maybe a small sketch or two of a work in progress. Fortin still primarily works off images he sees in his mind. But sometimes clients like to see an actual blueprint and he’ll accommodate them if pressed. Or even better, he prefers to make a scale version of a piece as an example.

The only thing Fortin pays as much attention to as his woodwork is his family, including wife Lisa and children Brittany, Jack, and Patrick. Not surprisingly, family members are frequent visitors to the workshop. “What I do is part of our family,” he says.

Fortin will also tell you that wood is not a static thing.

“Wood is very much alive,” says Fortin. “Each species of wood has its own movement, its own life. You learn to work with that energy.”

Although he specializes in large custom furniture pieces, Fortin has recently developed a niche item in designer cutting boards. The no-two-alike boards come in squares, rectangles, and ovals. They can be of one wood, but most are a combination of many different woods. Think putting puzzle pieces together to form a unique design in wood without the benefit of the picture on the puzzle box.

“I used to do some furniture with stained glass insets and that gave me the idea of the cutting boards,” explains Fortin. “Instead of fitting pieces of glass together, I use pieces of wood.”

The cutting boards have been well received, being the only finished product that Fortin has more of than raw inventory. He continues to feature them at art shows and has a good selection available in his office showroom.

“People come in to talk to me about a custom project, see the cutting boards, and end up buying one right then,” he says. “They like having something they can walk out with while waiting for a bigger project. They make great conversation pieces.”

So happy with the reception of the cutting boards, Fortin began to think of how to use the concept in a larger piece. What evolved out of that was a three-foot tall, 45 x 32 maple kitchen island, complete with wine rack and cookbook shelf. But the crowning touch is the island’s countertop. Two inches thick, it features 900 pieces of nine different woods. Among them are maple, purple heart, imbuia, mahogany, black walnut, and cherry. It’s a stunning piece of work, indeed resembling a piece of stained glass.

“I’m very excited,” says Fortin. “I love when creativity kicks in and you end up with a piece like this. That’s why I do what I do.”

Following his own directions, of course.