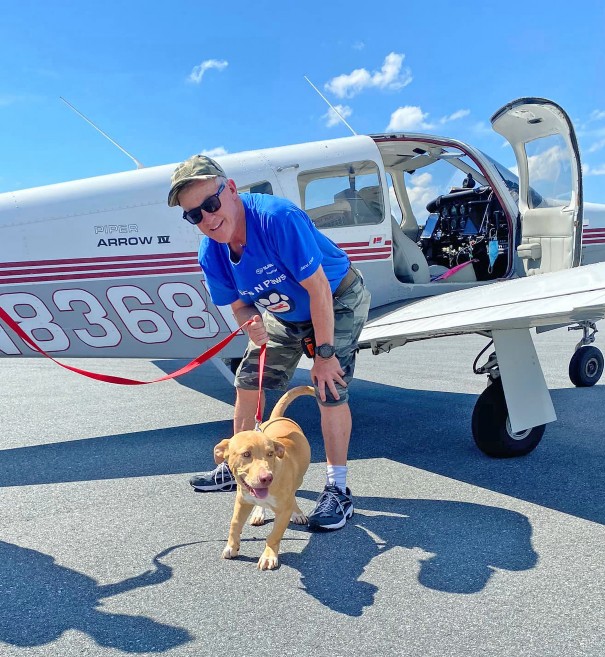 Pilot Frank Gulla has parlayed his passion for fl ying into making a difference in shelter dogs’ lives. Pilots N Paws, a 501 (c)(3) nonprofit, connects 6,000 volunteer pilots and shelter/rescue volunteer coordinators across the country to transport more than 15,000 rescue animals each year.

Many dog owners will tell you their pet loves to take car rides. Turns out, dogs like plane rides too.

“In a plane, dogs are kind of like young children who fall asleep during a car ride. Once you turn on the engine and start moving, most of the dogs fall asleep and some sleep through the whole ﬂight,” says The Villages resident Frank Gulla, who has been ﬂying dogs for Pilots N Paws since 2018.

“I’ve ﬂown more than 60 transports, more than 80 dogs at this point, and I’ve never had a dog freak out in the plane,” he shares. “And I’ve had only one dog have a little motion sickness. The dogs really handle ﬂying well.”

So well, in fact, that Gulla occasionally has a dog who wants to be a co-pilot for his four-seater Piper Arrow IV, which is housed in an Ocala International Airport hangar.

“I don’t crate the dogs and generally only ﬂy one dog at a time. If it’s two dogs, then I put one in the baggage area with a blanket and the other in the passenger seat right behind me,” he explains. “Once I was ﬂying two huskies, Bonnie and Clyde. I put Clyde in the baggage area and he fell asleep right away. Bonnie sat in the passenger seat and would put her head, sometimes a paw, gently on my shoulder and look out the window. I think she would’ve gotten in my lap and tried to ﬂy the plane if I had let her.”

Unlike Bonnie, Gulla was able to transition from passenger to pilot 36 years ago. At the time, he was an audit project manager with the U.S. Department of

Defense Oﬃce of Inspector General and Naval Audit Service, based at the U.S. European Command in Stuttgart, Germany.

“I always liked ﬂying. While in Stuttgart, I had a friend who was a pilot and I went ﬂying with him all the time,” recounts Gulla, 69, who logged three years in the U.S. Army and then added a 29-year career in civil service. “So, one day he tells me that I should get my pilot’s license. I took my ﬁrst lessons in 1984 and got my pilot’s license in 1985. I’ve been ﬂying ever since; ﬁrst in rented planes and then I bought my Piper in 2003.”

Gulla moved to South Riding, Virginia, in 1996, while continuing to work for the federal government, including spending two years in Baghdad, Iraq. He retired from civil service in 2008 and returned to South Riding. Not one to retire and take up playing golf, Gulla became a real estate agent and emergency medical technician (EMT). And, of course, he kept ﬂying.

oﬀers. “While in the area, we’d visit other places and that’s how I ﬁrst visited The Villages. I liked it so much that I moved there in 2014 and found the perfect place for my plane at the Ocala airport.”

Just like it was a friend who led to Gulla getting his pilot’s license, it was another friend who introduced him to Pilots N Paws.

“I rode along with my friend on a Pilots N Paws ﬂight with a mother Chihuahua and her ﬁve puppies,” remembers Gulla. “It was a fun thing to do. When we landed, there was just such joy when the dogs were picked up. I decided right then and there to become part of Pilots N Paws.”

The Pilots N Paws website (pilotsnpaws.org) operates as a facilitator between volunteer pilots and shelters/rescue groups. Volunteer coordinators post their transport needs and connect with available pilots in their area.

Ellsworth, who lives in Tallahassee, has been involved with Pilots N Paws for 10 years.

“The capacity, counting dogs and cats, at Bainbridge is 125-135. When we reach that number, we start moving animals to other shelters or rescue groups where they will have a renewed chance to be adopted. My personal mission is to save as many animals as possible and ﬁnd them a forever home,” explains Ellsworth. “I post on Pilots N Paws and then get connected with a pilot. We have pilots from all walks of life. Some, like doctors, lawyers, veterinarians, can only ﬂy on the weekends.

Others, like Frank Gulla, are retired and can do weekday ﬂights. Frank is wonderful, is one of our regulars and we can always count on him.”

Ellsworth notes that “sometimes the pilot ends up adopting the dog or cat that’s being transported and that’s a great outcome.”

When he gets an assignment to pick up a dog(s) from Bainbridge, Gulla makes the hour and 15-minute flight from Ocala to the Decatur County Industrial Air Park. He is met there by a Bainbridge volunteer with his passenger(s).

From there, he transports the animals to the nearest airport for ground transport to a shelter or rescue group.

“I ﬂy a lot into the St. Pete-Clearwater International Airport, but really have probably ﬂown into every airport in Florida,” says Gulla. “Monica Marshall, a volunteer coordinator in Stuart, works with Siberian husky rescue groups. One of those groups is GTS Husky Rescue in Jupiter. I’ve picked up huskies that are ﬂown in from Louisiana and Texas to the Williston airport. Then I ﬂy them to Stuart and then they’re driven to Jupiter.”

While cats are also ﬂown, Gulla has only transported dogs. He grew up with dogs as pets, but currently doesn’t have one.

“I ﬂew a beagle puppy once and he was just the cutest thing,” says Gulla, who is an avid pickleball layer and enjoys riding his motorcycle when he isn’t ﬂying. “The person coming to pick it up at the airport was late. And I started thinking that maybe I’d adopt the beagle. But then the person showed up and told me the puppy had already been adopted. But who knows, there might be a dog for me one day.” 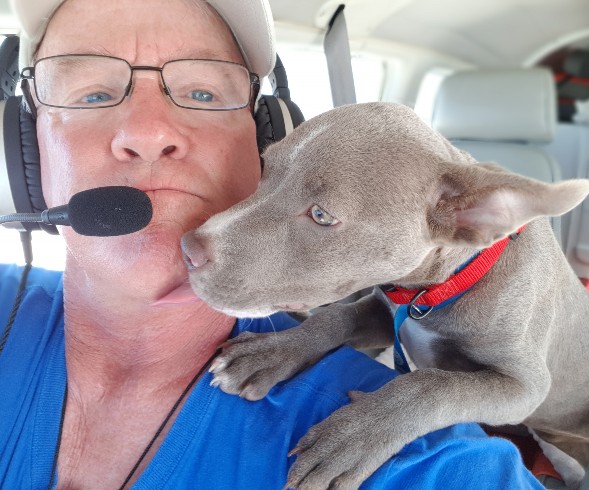 While he still enjoys recreational ﬂying, his involvement with Pilots N Paws has given him a new view from the skies.

“My ﬂying buddies and I have always liked to do breakfast and lunch ﬂights to diﬀerent places. The saying among pilots who do that is that by the time you pay for fuel, you’re paying $100 for a hamburger. But after a while you get tired of $100 hamburgers,” reveals Gulla. “Flying for Pilots N Paws gave me a purpose, gave my plane and ﬂying a purpose. I never get tired of ﬂying for Pilots N Paws and always look forward to the next ﬂight. It’s my way of giving back.”

His eﬀorts are surely appreciated by his passengers…especially those wannabe-canine- pilot types.