Automobiles and planes may now be our main modes of transportation, but the fascination with trains persists. For many, young and old, there’s just something special about hearing the huffing and puffing of a steam engine, the clickety-clack on the railroad track. Seeing the world from a train is a great family experience for all ages. From vintage steam locomotives to a movie train to Thomas the Tank Engine, here’s a look at a few train experiences in Florida. 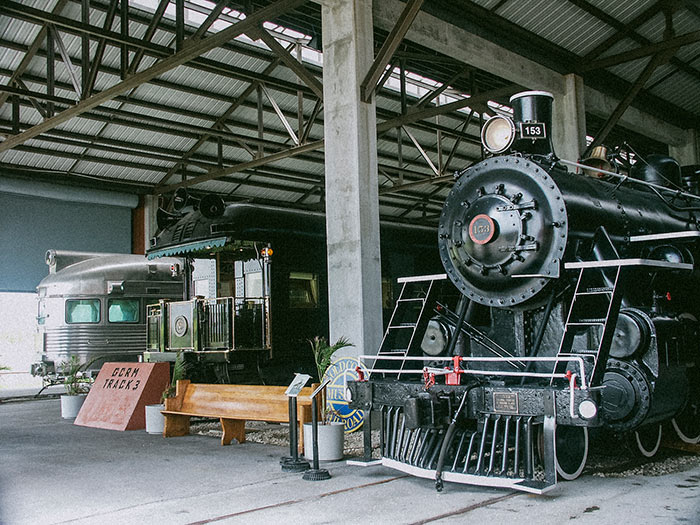 The Florida Railroad Museum was founded with the goal of preserving the state’s railroading history as it existed in the 1940s and 1950s. The FRM, which is a 501(c)(3) entity, operates on a six-mile line between Parrish and Willow, Florida, in rural Manatee County. Museum members and volunteers operate the weekend train rides, which feature diesel locomotives pulling open window, covered gondola and air-conditioned coaches.

Open year-round, except for a two-week Christmas/New Year’s break, there are train rides every Saturday and Sunday at 11am and 2pm. The approximately 90-minute rides are a 13-mile round trip. Tickets are $14 for adults, $10 for children 3 to 11 and free for children under 3. The actual museum is free of charge for everyone.

The FRM puts on special events every year, and one of the biggest is the annual Day Out With Thomas. This year’s edition, featuring Thomas the Tank Engine, is scheduled for March 11 through 13 and March 18 through 20.

“Day Out With Thomas is our biggest special event next to our Polar Express in December,” says FRM Station Master Heather Vick. “During the Day Out With Thomas event, gates open at 8:30am with the first ride going out at 9am. There is a Thomas ride every 45 minutes until 3:45pm, which is when the last train goes out. Besides the Thomas train ride, there will be all kinds of fun activities going on throughout the day. We strongly recommend buying Thomas tickets in advance.”

The Orange Blossom Cannonball is a bit of a celebrity. The movie train was first featured in the 1964 movie This Property Is Condemned. Since then, the train has been featured in more than 20 TV shows and movies, including True Grit,3:10 To Yuma, O Brother Where Art Thou and Rosewood.

The 90-minute trips, Wednesdays through Sundays, on the Tavares, Eustis and Gulf Railroad line, include vintage coaches pulled by either a 1907 steam locomotive, the only wood-burning one in use in Florida, or a 1941 GE 45-ton center cab locomotive. The Orange Blossom Cannonball leaves from either the Tavares or Mount Dora train stations.

“We enjoy sharing the Orange Blossom Cannonball with people. It’s an authentic experience,” says General Manager Richard Grigsby. “We’re planning some special train rides this spring, including for families, so check our website regularly or give us a call.”

Children 3 and under ride free.

Located on 50 acres adjacent to the Miami-Dade Zoo Miami, the Gold Coast Railroad Museum has been in existence since 1942. Railroad tracks loop around the property that was once a naval yard, where missions were launched to search for enemy submarines sneaking into U.S. waters during World War II.

“There is so much history here on this property,” says Lilia Fontana, executive director of the Gold Coast Railroad Museum, a 501(c)(3) entity. “The tracks connected to the old CX line and brought in supplies to the naval yard. All our train rides take place on those tracks and are great family outings.”

“We have a separate building for model trains,” says Fontana. “And a special hands-on model railroad exhibit for kids. There are 20 Thomas the Tank Engine tables where kids can play and even build their own toy wooden trains.”

And speaking of Thomas the Tank Engine, the beloved children’s favorite will be making a special appearance at the Gold Coast Railroad Museum on March 5 through 6 and March 12 through 13. The Day Out With Thomas event features 25-minute train rides throughout each day. There will also be a Thomas & Friends Imagination Station with Thomas-themed activities, including Thomas storytelling and video viewing areas, during each day’s event. Admission for each event is $20 for those 2 years old and older.

“We’ve had a Day Out With Thomas event for 11 years,” says Fontana. “It is always well attended and so much fun, not just for the kids, but for their parents, too.”

Several other regular train rides are offered on most weekends, including:

Edwin Link Children’s Railroad: The 20-minute ride on the completely refurbished small train is on a 2-foot gauge track. The cost is $2.50 per person; children under 1 are free.

Standard Gauge Caboose Or Coach Car: These 25-minute rides use a diesel locomotive with two different coach cars or a caboose: the air-conditioned Belle Glade passenger coach, a 1920s Florida East Coast Open-Air coach or the Classic Caboose. The cost is $6 per person for all ages.

Engineer Cab/Standard Gauge Diesel-Electric Locomotive: This ride puts guests in the operating cab of a locomotive with the engineer. During the ride, crew members will detail the history and operation of the locomotive, as well as the history of the museum property. The 25-minute ride costs $12 per person for all ages.

Owned and operated by Daryl and Tracy Kirby, the Kirby Family Farm’s No. 19 engine and its five cars date back to the 1800s and were once part of the Denver and Rio Grande Railroad. The latter was the original narrow gauge steam railroad that ran through the Rocky Mountains. The Kirby Family Farm train is the largest railroad on private property with 1.3 miles of track.

“It’s not really a hunt, as much as an Easter egg pick up. The eggs are empty because candy attracts ants,” says Daryl Kirby. “We let the kids go by age groups to pick up the eggs, and they have a ball. Every kid gets a special prize egg instead of candy in the eggs.”

Included in the $10-per-person general admission (ages 2 and under are free) are 15-minute train rides all day long around the property, from 10am until 2pm. There will be music, singing, games, a petting zoo and special guest characters from Nickelodeon. That ticket will also allow rides on a 28-horse carousel.

Kirby Farm also recently received a major donation from a theme park, which includes a super slide, swing ride and a kiddie train. There will be a $10 armband available to purchase for those rides.

Not open to the general public except for special events, Kirby Family Farm is a 501(c)(3) non-profit educational facility for at-risk children. In addition to special events, such as the Christmas Express, which are open to the public, the farm offers field trips, private and group tours, and occasion celebrations such as birthdays, weddings and anniversaries. Just make sure to make a reservation first!