Patricia Tomlinson, the Appleton Museum of Art Curator of Exhibitions, explores the complicated identity of some works of art. Tomlinson, a former professional archaeologist, joined the museum in 2016 after serving as curatorial staff in the New World Department at the Denver Art Museum. 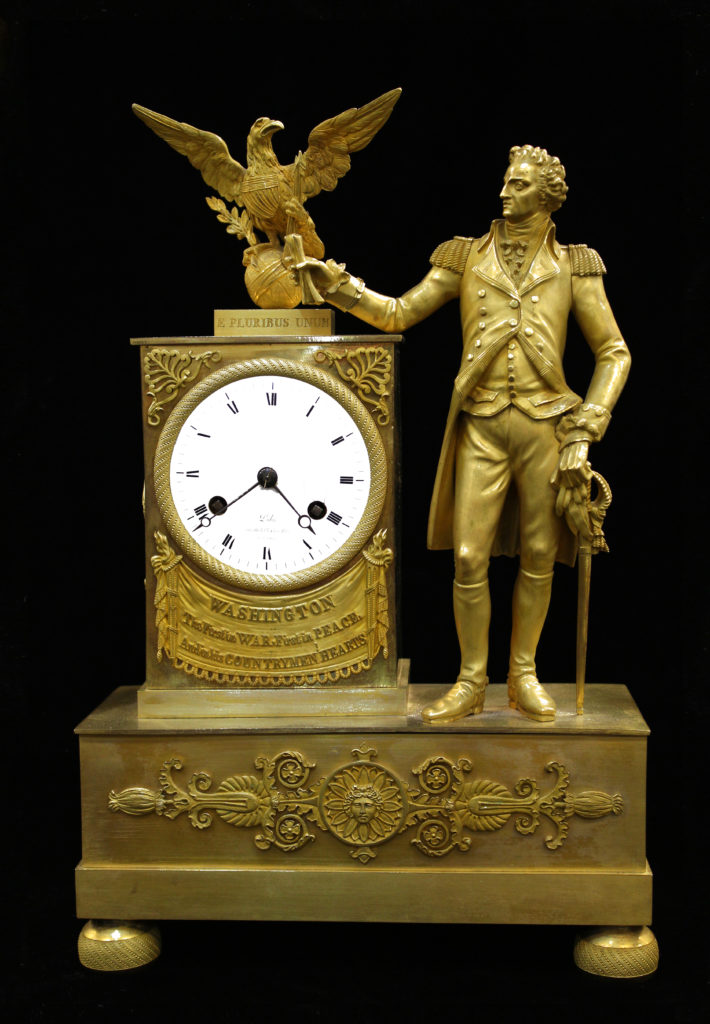 For many years American Art was defined by art and objects that were largely created in the 1700 and 1800s by individuals of European heritage who lived in the United States of America. In short, colonizers. And the vast majority of the colonial-era art that was written about and exhibited was produced by men. Artworks that were often traditionally created by colonial women, such as quilts, samplers and other needle arts, were completely ignored. Sure, you might see some of these pieces in history museums, but rarely were they considered “art.” In addition, paintings, ceramics and other wonderful art created by enslaved Africans was overlooked, as were the centuries-long artistic traditions of indigenous peoples—even though all of that art was made in “America.”

See what I mean by “complicated?”

To further muddy the waters, let’s look at an artist and an artwork from the Appleton’s own collection—the artist Elizabeth Jane Gardner and a decorative clock featuring a diminutive sculpture of George Washington (1732-1799).

Elizabeth Jane Gardner was born in Exeter, New Hampshire, in 1837. As a girl, she received the typical education of a young lady at the time, which included basic drawing and watercolor painting. At the age of 27, frustrated that she was unable to progress further in her art due to lack of art schools that would accept women, Gardner traveled to France to begin serious study and was eventually accepted at the Académie Julian in Paris. She never returned to the United States and went on to become an accomplished and sought-after artist. Although Gardner was technically American, she left at a young age, became an accomplished artist abroad, and is buried in France. Should she be considered an American artist?

Another example is a second clock with the figure of George Washington. In addition to his likeness, the gilded clock exhibits an American eagle and the motto “e pluribus unum,” or “out of many, one,” seen on United States currency. This clock, however, was made in France by French artist Jean-Baptiste Dubuc, known as “Dubuc the Younger” because he was named after his father, who also was an artist. Should this very patriotic clock, exhibiting one of the United States’ founding fathers, be considered American Art because of its subject matter?

I don’t claim to have all the answers to this conundrum, but many of my curator colleagues across the country are asking the same questions about inclusion and how to tell the tales of what it means to be American.