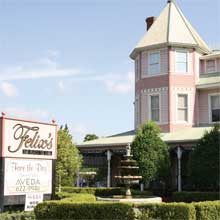 It’s always easier to reach your goals when you know what they are. Fortunately, Loring and Marge Felix had very clear goals when they opened Felix’s in December 2001.

After decades of working in the restaurant business for different owners, the couple wanted an establishment of their own where they could call the shots and serve their customers in the best possible way. But they didn’t want to open just any restaurant. They were determined to have an award-winner.

In a relatively short time, Felix’s has done just that.

Rated among the “Top 500 Restaurants” in the state by Florida Trend magazine, the restaurant has repeatedly won top honors in the annual Taste of Ocala competition. For a couple whose focus has always been on the food industry, these accomplishments are carefully planned steps along a path they began carving years ago.

The oldest of three children, Loring was raised in Connecticut. From an early age, he was no stranger to the kitchen. His mother was a registered nurse who worked the night shift, so Loring frequently made dinner for himself and his younger brother and sister.

Loring’s family moved to Ocala in 1974 and he finished high school at Lake Weir, receiving his diploma in the school’s first graduating class in 1976. After attending a year of community college, Loring joined the Marine Corps.

When his tour of duty was over, Loring moved back home to Ocala and became one of the first cooks hired by O’Neal’s, a favorite eatery located downtown. Within three years, he had been promoted to the position of Chef and remained with O’Neal’s for almost four years.

But South Florida and its many restaurant opportunities beckoned. He heeded the call and spent the next ten years working in a variety of fine-dining restaurants.

In 1992, the owner of University Center Hotel in Gainesville asked if Loring would be interested in taking over their rooftop restaurant, Capriccio’s, a fine-dining Italian establishment. Loring accepted and it was there that he met Marge, whom he married five years later.

Born in Southern California into a family of 10 children, Marge moved to Gainesville when she was 11 and has called Florida home ever since. She’s been known as the “party girl” since childhood and loved setting the table, shining the silver, and making place cards.

Those natural inclinations were put to good use when Marge began planning events while working in the human resource department at K-Mart during her high school years. After graduating, she went directly into the food and beverage industry, working in catering for Service America at the University of Florida.

Her first big event was the inaugural ball for former UF president Marshall Criser in the 1980s.

“I was in charge of set up for this sit-down dinner for 2,800 people,” Marge remembers. “We were locked in the O’Dome and literally worked for two full days setting up. This was the event that made me realize event planning was for me. I love seeing things come together.”

Marge later landed her “dream job” as wedding and event coordinator in the catering department at the University Center Hotel. At the time, anyone who was anybody in Gainesville considered this the place to hold a special event. During her nine years in this position, Marge organized many prominent social gatherings, including the wedding for the daughter of former UF football coach Steve Spurrier.

In 1996, Marge and Loring moved to Ocala where they opened Bella Luna Cafe as managing partners. The venture was a successful one and kept them busy for the next six years, but they had another goal.

The couple took a year off, crafted a well thought-out business plan, and got together enough money to open their own restaurant, Felix’s, on December 7, 2001.

“The restaurant business is all or nothing, and we’d made a lot of money for a lot of people,” says Loring. “It was our turn.”

Felix’s treats each of its customers like family, something that’s very important to both Loring and Marge. When the couple’s son, Christopher, was born three years ago, they soon began featuring him in magazine ads. His favorite menu item is the spicy Ahi Tuna.

“My favorite job is being mom to Christopher,” admits Marge. “A lot of our customers say they don’t see me as much now, but that’s because I try to be home with Christopher at night. I’m always at the restaurant for lunch.”

Clearly devoted to each other and to their son, Loring and Marge plan their schedule to have two full days off every week when Felix’s is closed on Sundays and Mondays. When they aren’t working, they spend time together as a family and enjoy checking out new and old favorite dining spots in Orlando, Tampa, Maitland, and other cities.

Deeply involved in their community, the couple uses Felix’s to make a positive impact on numerous charity causes every year. They also established an endowed scholarship in Christopher’s name at Central Florida Community College to assist worthy students who need help with tuition.

“They’re great supporters,” says Barbara Griffin at CFCC. “They’ve thrown community birthday parties for their son and invited many patrons to their restaurant. Instead of presents, they asked that contributions be made in his name to the endowed scholarship they set up to honor him. They are very grateful to this community for their success.”