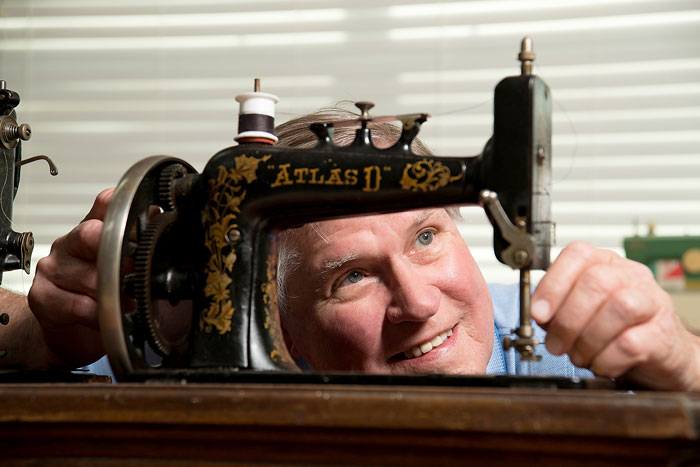 Be forewarned.Spend five minutes with Johnny Johnston and you’re likely to catch old sewing machine fever. You just might find yourself on a frenzied scavenger hunt, rummaging through garage sales or your grandmother’s closet. All in hopes of discovering a rare antique sewing machine. And then with a smile on your face, you’d visit Johnston with your find.

Johnston has earned his moniker of “The Old Sewing Machine Man” one stitch at a time. An animated storyteller, Johnston delights in regaling people with all things old sewing machines, especially the Singer Featherweight 221. From history to the joy of finding a treasure to the fine distinction between restoration and reconditioning, he loves spreading the sewing machine gospel. And all this is rather surprising because before his current obsession, Johnston spent 30 years as a cop. Not much need for sewing machine expertise in that line of work.

But, ah, as the saying goes—behind every man of worth is a woman. And in this case, that woman is Debbie, Johnston’s wife of 32 years. A lifelong quilter, Debbie had a Singer Featherweight 221 in need of repair. And she was also determined that when her husband retired, he was not going to become a couch potato. Somehow those two things met at a crossroads, and, Violà! Johnston had an avocation and a vocation all sewn up into one. 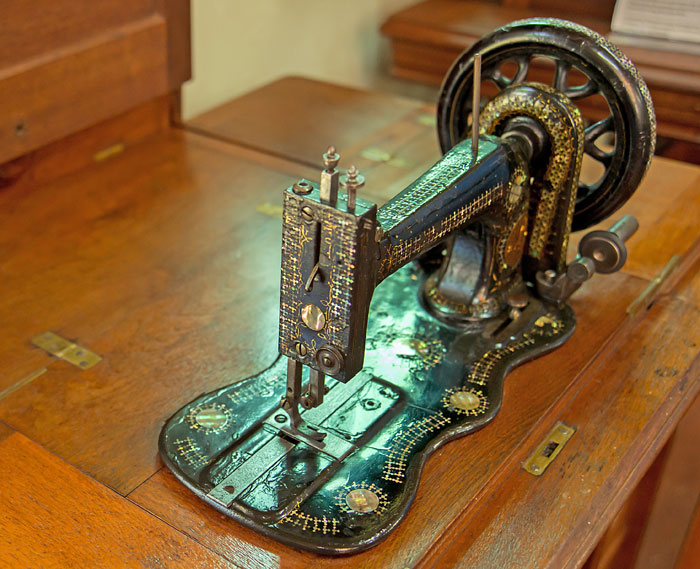 “I bought Debbie a Singer Featherweight 221 in the late 1970s. Quilters love the Featherweight because they’re portable and they make perfect straight stitches for their piecing work,” says Johnston. “It worked great for 30 years, but then it started giving her trouble. She didn’t want to give up her Featherweight, so we looked around for someone who could repair it. That turned out to be a difficult task.”

The Johnstons, who live just northeast of Ocala in Anthony, did finally find a man in Citra. He fixed the sewing machine just fine. But unfortunately, he died soon after. That got Johnston, who always had a mechanical knack, thinking.

“I started thinking about learning to fix old sewing machines,” recalls Johnston. “Debbie and I would go to garage sales to look for them. I’d buy any kind, take them home and work on them. It was all learn as you go. Then I took a sewing machine repair class. After that, I began studying the history of them and found it all very interesting. By the time I retired from the Ocala Police Department in 2008, I had a nice little hobby.”

But Debbie had something more in mind than just a hobby.

“I got home one day and there was this pre-fab building on our property,” says Johnston, 70, with a chuckle. “Debbie tells me that’s my new workshop and hands me business cards that said I could fix old sewing machines.”

With business cards in hand, Johnston started accompanying Debbie to quilters’ shows on weekends. He was instantly well received.

In fact, business became so brisk that Johnston had to set parameters to get any work done. Monday, Wednesday and Fridays are customer days, where people can come by with their sewing machines. Tuesdays and Thursday are what he calls “Johnny-only work days.”

Johnston isn’t just the go-to Mr. Fix-It when it comes to old sewing machines; he’s also become an avid collector and historian. A sort of old sewing machine guru. His on-site museum, which is open to tour upon appointment, includes a wide variety of sewing machines from hand cranks to treadles to portables. The oldest is an 1861 Home Shuttle, made by the Gold Medal Company. A particular favorite is a 1934 Featherweight, which had been introduced at that year’s Chicago Expo: A Century of Progress and still has the event’s original sticker on it.

Johnston also donated a 1950s-era Singer hand-cranked sewing machine to the Ocala-based Silver River Museum’s Florida Seminole Indian Exhibit. Seminole women were expert seamstresses, who perfected a signature patchwork sewing style. From the late 1920s to the early 1960s, there was a Seminole Village at Silver Springs. Tourists could see Seminoles going through their daily routines, including sewing on Singer hand-cranked sewing machines. The items they made were sold to tourists and residents.

“I got my collection started by going to estate sales and auctions. And you’d be surprised at what you can find at just regular garage sales,” says Johnston, who is a member of the International Sewing Machine Collector Society. “Then, as people heard of me, I started getting calls. Some of the sewing machines needed repair and reconditioning. Others were practically like new. Every find was always exciting.”

And Johnston particularly likes when he finds out the story connected to the sewing machine.

“A woman called me and said she had a Featherweight that her father had bought for her mother in 1942 just before he went off to war,” says Johnston. “Well, her father was killed in the war, and after that, her mother just couldn’t bring herself to use that Featherweight. I go to look at it, and it’s not only still in the box, it was still in the original wrapping paper! I bought it right away. All I had to do was oil it, re-wrap it and then I sold it ready to use.”

Another in-the-box Featherweight gifted Johnston with a fortuitous discovery that advanced his historical knowledge of the sewing machine.

“I was at an estate sale and opened up this Featherweight box,” says Johnson. “And not only was there a machine in pristine condition, but there was a book that I had never heard of before in the box, too. I couldn’t believe my good fortune.”

The book was a first edition of Featherweight 221: The Perfect Portable/And Its Stitches Across History by Nancy Johnson-Srebro.

“It was the most thorough history of the Featherweight that I had ever come across in one book,” says Johnston, the delight in his voice over the discovery still evident. “After I did some research, I found that the book’s third edition was still available. Since then, I’ve kept it in stock and sell it well. People who love the Featherweight just love the book.”

According to Johnston, the first models sold for $45 to $50, which was a surprisingly high cost in the midst of The Great Depression. But they sold very well, and by the 1950s, the cost rose to $135-$150. It’s estimated that between 1933 and 1968, Singer produced and sold 3.5 million Featherweights.

“In 1964, Singer sold out to the Brothers Sewing Machine Company in Japan,” says Johnston. “But Singer had a deal to keep producing the Featherweight here. Then, when the Japanese began flooding the market with their cheaper portables, Featherweight sales fell. Singer stopped making them in 1968.”

Production might have ceased, but the Featherweight still had its loyalists, especially the quilters who held on to them and continue to use them decades later. And just like Debbie’s eventually needed repair, so too do other machines that find their way to Johnston.

When it comes to sewing machine restoration, Johnston is a bit of a purist. So much so that he prefers the word reconditioning to restoration.

“The problem I have with restoration is that people have come to think of that as taking something old and making it modern,” explains Johnston. “I’m not interested in doing that. I preserve the patina and try not to replace the original graphics on the sewing machine head. What I like to do is recondition a sewing machine back to its original beauty, not create a whole new machine. If you want that, then just buy a new one.”

Johnston is so steadfast about his reconditioning concept that he turned down an opportunity with The History Channel.

“They called me about doing a segment on what they described as restoring old sewing machines,” says Johnston. “I explained to them that I didn’t do that, but instead reconditioned them. They couldn’t understand the difference and tried to change my mind. But I turned them down. They were very surprised that I did.”

It’s not like Johnston needed the attention or the extra work. He stays plenty busy, taking in three to four sewing machines a day. When he isn’t in his workshop, he gives talks to interested groups; he and Debbie jump in their RV and go to weekend shows.

“I’m having a ball,” says Johnston. “I get to meet so many interesting people and hear great stories about their sewing machines. I love the challenge of reconditioning a machine. Every day is different. Thanks to old sewing machines, there definitely hasn’t been much couch time in my retirement.”