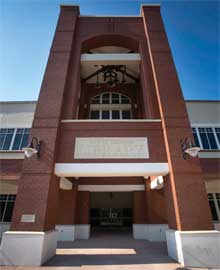 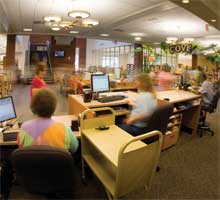 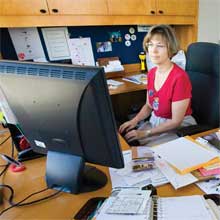 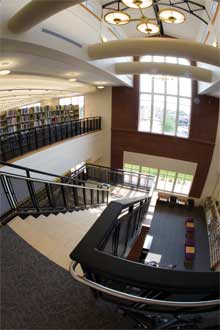 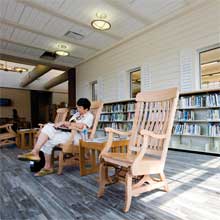 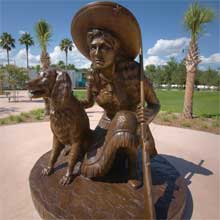 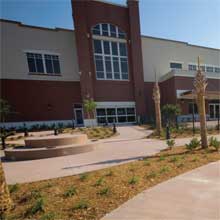 The new Leesburg Public Library has taken a lesson from Disney. More than just a place to house thousands of books, the library is designed to be a destination where adults and children can go to spend time whether it’s for educational, informational, or entertainment purposes.

From the colorful “Imagination Cove” for young children and “Amazing Spaces” for teens, to one of the finest genealogy resource centers in the state, the new 42,000-square-foot structure in downtown Leesburg offers space where patrons of all ages can find something of interest.

“We tried to create a Disneyesque destination for adults, teenagers, and children,” says Barbara Morse, Leesburg’s Library Director. “When people come, they’ll be coming to experience the library, not just check out books.”

Those experiences can range from strolling through the unique butterfly garden on the north side of the building near Cleveland Street to just relaxing over a cup of freshly ground “Leesburg Blend” coffee in the library’s very own café at the front entrance. Or maybe it will include listening to stories in the colorful children’s reading garden or attending a concert in the outdoor amphitheatre.

At a total cost of more than $8 million, the library will be the focal point in a downtown area that has seen a sweeping revitalization in recent years, thanks to the efforts of the Leesburg Partnership, an association of residents, government, and businesses people.

“Keeping the library downtown was important,” says Leesburg Mayor Sanna Henderson. “It will continue to make the downtown area a viable area for many years to come.”

Mayor Henderson, a member of the Friends of the Library since the 1970s, says that one of the reasons she wanted to be a commissioner again was to make sure the library was built. She had previously served as a commissioner from 1981 to 1995, and she fondly remembers when the Leesburg Library moved into a renovated department store in the mid-80s.

“We had a book brigade to move the books across the street from the old building to the new space,” she remembers. “I think this new location might be a little far to form lines and pass the books along.”

Located on Main Street at the site of the old Elks Club building, the massive two-story brick structure is the first library that was “built to be a library,” explained the mayor.

In the past, the Leesburg Library was given what could be called hand-me down locations. The very first library occupied a closet in the Women’s Club until a room on the east side of the Community Building was donated. Next, the library was housed in a former downtown post office building before moving to the redesigned Sears building on Fifth Street, where it had been for more than 20 years.

With an ever-increasing number of patrons, the department store space was quickly outgrown.

“Our public spaces were not bad, but the work space was horrible,” says Barbara, who has been the director for five years. “There certainly wasn’t any room for the growth we’ve experienced.”

And the new library still has growth in mind with several areas earmarked for future expansion. The library’s “wish list” includes needs for the next 20 years. In addition, many of the new spaces have multiple uses.

“Almost everything we designed can be used in multiple ways, because we did not want to see spaces that sat unused,” explains Barbara. “We can move book stacks in the young adult area and make an open floor space for a group of teens.

“The computer lab can be open during the day for the general public or it can be closed off with a moveable wall when classes are in session,” she says. “The Florida room opens into the second floor porch and is an ideal area for small receptions.”

As Barbara and her team made a wish list for the library, the costs were growing. They scaled back several times until the Friends of the Library stepped in and said scale back no more. The Friends went to work with a dynamic fund-raising campaign that so far has netted more than $800,000 in private funds.

“We were able to add back many of our ‘wishes’ thanks to the Friends of the Library,” Barbara says.

One of those wishes included the first public art for downtown Leesburg. Thanks to the Friends of the Library, the entrance will feature a commissioned bronze statue of legendary sharp shooter Annie Oakley, who made Leesburg her summer home during the early 1920s. In addition, private funds were used to enhance the building with a Florida sunroom and an outdoor performance area and reading garden. The Friends of the Library also will have their very own room at the front entrance for ongoing used book sales.

The Leesburg Public Library is the largest municipal-funded member of the Lake County Library System, which includes 13 libraries throughout the county. Each month, the Leesburg Library sends more than 5,000 items to the other libraries through a reciprocal agreement between the city and the county. It’s that agreement that lets anyone in Lake County check out materials from the Leesburg location. Non-Lake residents can pay $20 for a six-month library card or $40 for the year.  However, anyone — with or without a library card — is invited to experience Leesburg’s newest place to be.

The Leesburg Library at a Glance

• Friends of the Library bookstore.

• Radio-frequency ID for self check-out by patrons.