When Mount Dora artist Jackie Holland Berkley needs inspiration, she gets in her car and takes a drive. She’s never sure if it’ll be a short or a long drive. She doesn’t have any particular destination in mind, and she’s not searching for a specific subject matter. Berkley just drives, letting her creative mind’s eye absorb what’s around her. And whenever something or someone does grab her attention, she doesn’t stop and take a picture or do a quick sketch. Instead, Berkley mentally stores it away, not just the image but, more importantly, the essence of it.

“My process is to work from memory,” says Berkley, a Jackson, Mississippi, native who drew as a child and was doing oil paintings by the time she was 13. “Since my work is impressionistic and abstract, I’m trying to capture an essence, not a literal image. Yes, I want to convey beauty, but more so honesty and truth. That’s what really connects with people.” 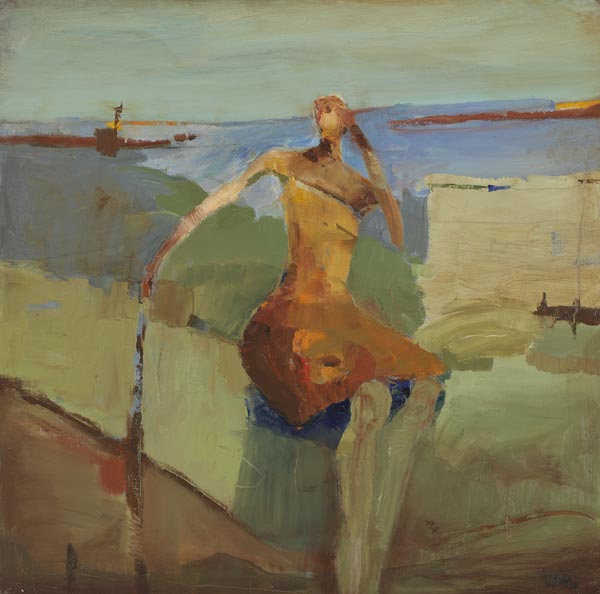 While Berkley strives for a simple message, there is nothing simplistic about her ever-evolving impressionistic paintings, complex pieces awash in vibrant colors, primal symbolism, and abstract composition. Whether it’s a hauntingly beautiful landscape or a gathering of ethereal human figures, Berkley’s work will make you stop and take notice. And sometimes, the response is surprising.

“I’ve had people look at one of my landscape paintings, then tell me they know that place and have even been there,” says Berkley. “But I tell them that isn’t possible because that place doesn’t exist.”

According to Mary Ann Cohen, the owner of Fort Lauderdale-based MAC Fine Art Gallery, Berkley’s work has another special quality that transcends its complexity. 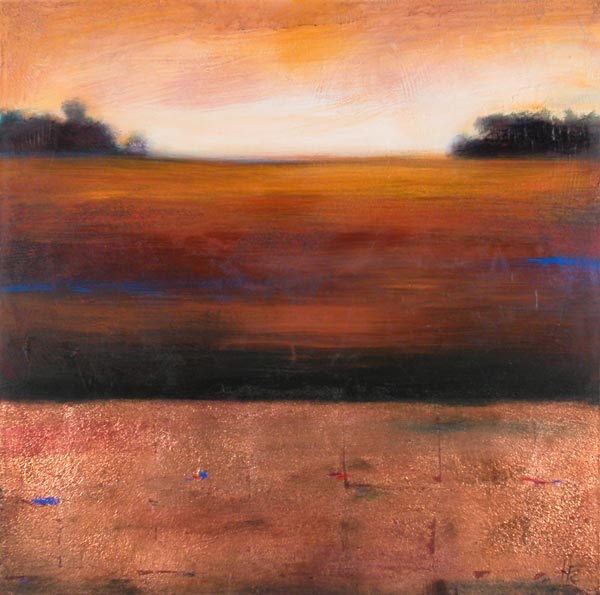 “I first met Jackie more than 12 years ago at an outdoor art show in Atlanta,” says Cohen. “Her work was so stunning that it just drew me in and I’ve been associated with her ever since. Her work has been really well-received in my gallery. Over and over, people tell me that they find her work very soothing. There seems to be an inherent healing quality, a sense of well-being that people pick up on. I find that very interesting given her uncommon art form.”

Berkley remembers drawing on anything and everything as a child. But because her beloved grandmother was a writer, she thought she’d become one, too.

“I had the good fortune of having parents who put me in art school at a very young age,” says Berkley, who still retains a hint of her Mississippi accent. “So art has always been part of my life and my journey.” 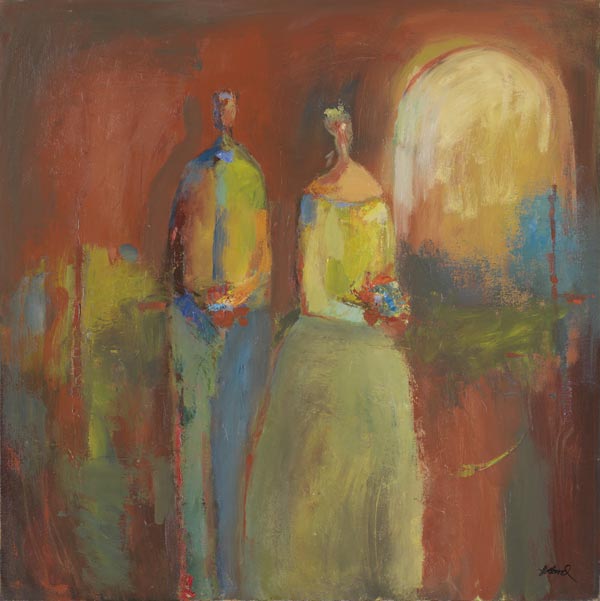 After receiving her Bachelor of Fine Arts in painting and art education from the University of Southern Mississippi, Berkley moved to Pensacola and taught art in the public school system. All the while, she continued with her personal artwork and got involved in the art show circuits, gaining recognition and a following along the way. Galleries began to exhibit Berkley’s work, and before long, her art found its way to the corporate offices of such companies as Disney, Exxon, Universal Studios, Federal Express, Larson-Juhl, and The Ritz-Carlton.

During those years, Berkley was also on the move. She lived in Atlanta and Miami for a decade each, then Orlando for awhile before settling in Mount Dora three years ago.

“I love living in Mount Dora,” says Berkley, whose daughter lives in nearby Windermere. “It’s a great town for an artist to live in, and I’m happy how my art has evolved since I’ve been here.”

In the three years she has lived in Mount Dora, Berkley has seen her art come full circle. She points out that she “began with abstraction, then went to landscape to figures, and now back to abstraction.” But there is a difference to her current abstraction.

“I am very focused on finding the perfect balance between the literal and the abstract. I call this phase of my art non-objective abstraction,” says Berkley, who describes herself as twice-divorced and happily single. “I find my abstractions becoming increasingly more horizontal with three flat planes. There’s the sky, the ground, and the foreground. If any figures emerge, they tend to be in the foreground and are very abstract.”

No two days are alike for Berkley in her home studio. A morning person, she isn’t one to paint until the wee hours and will generally work with background music. Depending on her mood and how the work progresses, the music can vary from classical to New Age to Southern rock in one session. 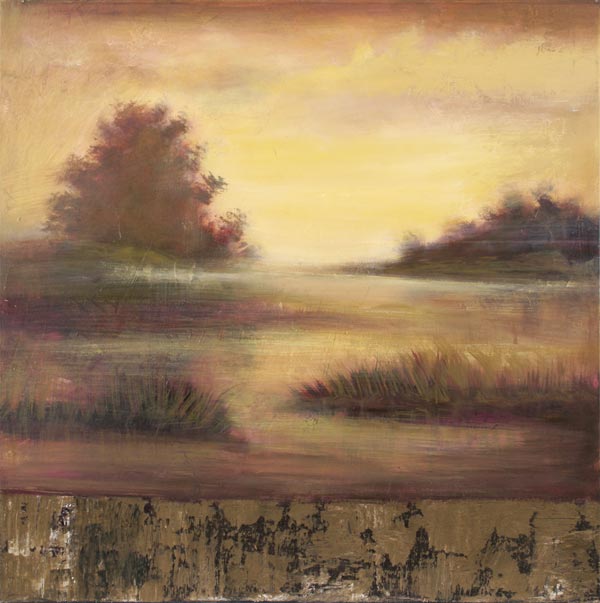 “I will write a mission statement for a show that I am doing paintings for. This helps set a tone and gives me direction,” Berkley says. “But I cannot tell a painting where to go. I have to let it be what it wants to be. Yet at some point, I am compelled to put a story in them. Like my grandmother, I’m a storyteller, just in a different format. She used words and I use images.”

For the Tavares Art in the Square show, which supplied its own theme, “On Water’s Edge,” featuring artwork connected to lakes, rivers, and the ocean.,Berkley gathered a cross section of paintings she had already done, such as Carnival Dress, and then did a boathouse series specifically for the exhibit. Carnival Dress features a white dress magically floating against an ocean cliff with midway lights and a Ferris wheel in the background. Three White Boathouses is from a child’s perspective of what different kinds of houses would look like.

Berkley believes artists “set up a problem with their work and then keep working through that problem until they solve it or let it go.” For that reason, she has seen her work go through cycles and series.

“I don’t think you can be an artist without being obsessive,” Berkley says, “and I become very fixated with and in whatever series I’m immersed in until I feel it’s time to move on, whether I’ve solved the problem or not.”

What’s not a problem for Berkley is working in many mediums. Besides acrylic oil, her work can incorporate newspaper, metal, sand, stone, wood, fabrics, charcoal, glazes, and varnishes. One of her more recent mediums has been pigment beeswax. After melting the beeswax, she puts it on the canvas and then takes a blowtorch to it.

“Sometimes I think of myself as a mad chemist,” says Berkley. “I’m constantly trying to figure out some secret formula that will create something I’ve never seen.”

But Berkley also always keeps those who will view her art in mind.

“I like to keep the final interpretation of my work up to the viewer,” says Berkley. “That’s why I’ve always been drawn to abstraction. I can put a story in the painting, but it’s open-ended and each viewer can complete it in their own way. That someone will be inspired is what I strive for.”