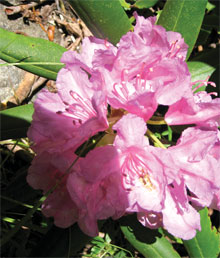 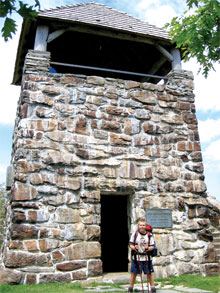 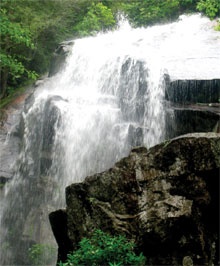 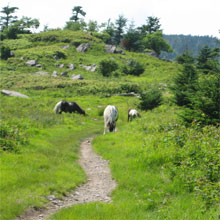 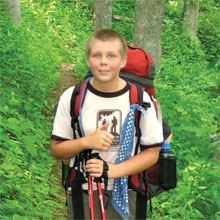 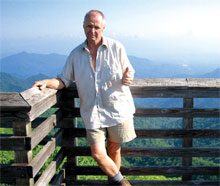 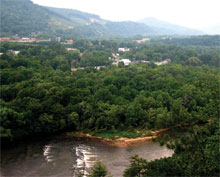 An offer to walk a mile in Dennis and Dakota George’s shoes is not to be taken lightly. The intrepid Ocala father/son duo hiked the first half of the 2,175-mile Appalachian Trial this past summer. To give you another perspective — that’s 1,009.4 miles through five states that took 65 days. And get this — the plan is to return this summer and finish the trek!

The undertaking by Dennis, 59, and Dakota, 12, included 10 to 12 hours a day of carrying 50-pound backpacks through forests, over hills and mountains, and through streams and rivers. The weather could change within an hour from hot to cold and back, from sunshine to rain and back. Lodging most nights was either a tent or a basic shelter. Basic meaning three-sided wooden lean-tos with a roof and a plywood floor. Sometimes they had to share the shelters with other hikers. And let’s not forget the mice, who also liked the shelters.

Aside from the shelter-loving mice, other animal encounters included black bears, rattlesnakes, black snakes, wild turkeys, and of course, the ubiquitous deer. The journey was so arduous that Dennis, who started at 174 pounds, weighed in at 147 by the end. Weighing 130 pounds at the beginning, Dakota later tipped the scales at a lightweight 109 pounds.

What sounds like insanity is actually attempted by hundreds of people every year. The motivation one would suppose, like that of any other major physical and psychological challenge, is simply because it’s there. For Dennis and Dakota, the adventure began as an ongoing father/son bonding experience.

“When Dakota turned 10, my wife Lisa and I began talking about adventure vacations that we could take together,” says Dennis, a Vietnam veteran who grew up in upstate New York hiking the Adirondacks. “Being people who enjoy the outdoors, summer hiking trips seemed to be the ticket.”

And because Dennis was familiar with the Adirondacks, it became their first destination. The goal was to do as many as they could of the mountain range’s 46 peaks that are over 4,000 feet. In three weeks, the pair did 30.

In the summer of 2005, the agenda included the national parks of the southwest and west. It was a two-month outing, which included parks in New Mexico, Utah, Nevada, Arizona, Wyoming, and Montana. Dennis and Dakota hiked through Big Bend, Zion, Grand Teton, Yellowstone, Glacier Park, and rim-to-rim in the Grand Canyon.

With an anticipated future move to Angel Fire, New Mexico, the now veteran hikers decided in 2006 to next tackle the big daddy of the East Coast — the Appalachian Trail.

“I started reading, finding out everything I could about the Appalachian Trail,” recalls Dennis. “Our other trips had been mostly day outings and just a couple of nights camping, but this was going to be different. There are towns along the trail to re-supply, but mostly you spend the nights on the trail. So we were going to need much more camping equipment, shoes, and clothes.

“And we started going to the gym three times a week, getting on the elliptical trainer and the treadmill. We took hikes and rode our mountain bikes on the weekends. We thought we were ready. We thought after all the hiking we had done before, this wasn’t going to be all that tough.”

Dennis and Dakota soon found out they were wrong. The Appalachian Trail was going to be more of a challenge than they’d ever imagined.

The southern start-off point of the Appalachian Trail is in Springer Mountain, Ga. But to get there, hikers are dropped off at Amicalola Falls State Park in Dawsonville and then have to hike the 8.8-mile Approach Trail to Springer Mountain, elevation 3,280 feet. That’s 8.8 miles that don’t even count!

Lisa George dropped off her husband and son on Sunday, May 28, at Amicalola Falls State Park. The plan was that the duo would be picked up by a family friend in Harpers Ferry, W.Va., on July 31.

“I couldn’t believe how hard those first eight miles were,” says Dakota, who kept a journal of the trip. “I was exhausted halfway up. And by the time we got to the top of Springer Mountain, we were both dead tired.”

Dennis and Dakota officially began their journey the next day, covering 14.5 miles. That night, under the heading of Tired as Heck!, Dakota wrote:

Two days and 39.3 miles later they reached Neels Gap, near Blood Mountain, which at 4,461 feet is the highest point on the 75 miles of the Appalachian Trail in Georgia. Dakota’s journal entry, titled Yee-Ha!, reflected his enthusiasm:

“Every report says that Blood Mt. will kill you. We hiked 2.0 miles in only half an hour and it was the easiest hike of my career! (Well actually, it was fairly hard.) I was so excited to have made such good time, and the mountain was awesome! Great views plus they had an old pioneer shelter that you could actually stay in! Short and rocky hike down to the supposed ‘lovely town’ Neels Gap. Wasn’t even a spot in the road!”

“It fairly quickly becomes you against the trail,” says Dennis, who acquired the trail name of Tail Dragger. “It’s as much a mental challenge as a physical challenge. The biggest difference between the Appalachian Trail and hiking out west is the terrain. You’re mostly in the deep woods, which is why the trail’s nickname is The Green Tunnel.”

That lack of many vistas led to another problem — boredom. Both Dennis and Dakota admitted that soon food dominates your thought process. As they hiked, they sang and ate energy bars. It became a matter of doing the miles with the goal of making camp at night and getting to eat — even if it was just a meal of freeze-dried food, made palatable by filtered stream or river water.

On the days that they detoured to a town to re-supply, the anticipation of eating real food — particularly fast food like pizza and hamburgers — was nearly overwhelming.

“Dakota usually led and he set a great pace,” says Dennis. “But if we were close to a town and he was thinking of a hamburger, it was all I could do to keep up with him.”

On June 8, the pair had covered 133.8 miles and reached the Nantahala Outdoor Center in Bryson City, North Carolina. Food was the main subject of Dakota’s journal entry that night:

“I ate like a king! A big giant pulled pork B.B.Q. sandwich with chips, fruit punch, and an ice cream sandwich. For dinner, a double bacon cheeseburger with fries!”

Animal encounters also helped to relieve the boredom. Dennis and Dakota were in the Great Smoky Mountain National Park in Tennessee, more than 300 miles into the hike, when they spotted their first bear.

“I had heard the bear earlier in the woods,” says Dakota, a.k.a. trail name Smelly Socks. “Then I saw him up ahead on the trail. My dad and I made weird noises and waived our walking poles at him. He ran away.”

Besides crossing paths with bears, eight by the time the trip was over, other diversions cropped up along the trail. Plenty of berry picking: blackberries, blueberries, and raspberries. And there was the excitement of witnessing the rescue of a hiker by a state police helicopter.

Having lightened their load by shipping home 16 pounds of stuff at a town stop on June 1, the pair began to add more miles each day. On June 21, they logged their longest day to that point at 19 miles. That day also included crossing over Big Bald Mountain, at more than 5,500 feet elevation. Three days later, Roan High Bluff at an elevation of 6,150 feet on the North Carolina/Tennessee border proved the toughest challenge for Dennis and Dakota.

“We went over the hardest mountain I have ever hiked. It was also very scary. I felt like death was near. Roan High Bluff, I’ll never forget it. The trail went straight up an exposed ridgeline to the top of a mountain. To add to that, it was foggy! Man ‘o’ man, this trail is flat out no good!”

But they conquered Roan High Bluff, hiked on and on June 30, rolled into Damascus, Va. Behind them were 459.5 miles. Billing itself as “the friendliest town on the Appalachian Trial,” the duo stayed at a $1 a night hostel and feasted at a Subway.

The Virginia terrain provided more interesting terrain. “It was nice to get out of the Green Tunnel,” says Dennis. “Here we were more out in the open and going over hills, through meadows. It reminded us of Montana.”

Adding to that out-West feel were the wild ponies encountered on the trails. “I guess people feed them,” notes Dakota. “Because they came right up to us. They were so cute and cuddly. And one even let me pet him.”

Making good time over the Virginia landscape, Dennis and Dakota reached another milestone on July 8. They covered 24 miles that day, averaging 2.5 to 3 miles an hour. But more mountains were up ahead. Their roller-coaster elevation varied wildly from 950 feet up to 4,025 feet, back down into a valley at 750 feet, up to 4,250 feet, another dip to 1,500 feet, and then an ascent to 4,100. All which prompted Dakota to title his entry at the end of those days: What Idiot Told Me VA. Was FLAT?

On July 31, Dennis and Dakota reached Harpers Ferry, W.Va., called the “psychological halfway point of the Appalachian Trail.” In 65 days, they had logged 1,009.4 miles.

There was no jubilant final entry in Dakota’s journal. He was just too tired those last few days, just wanting to get to the end of the journey. Nevertheless, it was quite an accomplishment. And, yet, one the Howard Middle School student decided not to tell any of his friends about.

“I didn’t think anyone would believe me,” says Dakota, “if I told them I hiked more than a thousand miles of the Appalachian Trail.”

For Dennis, the experience was a humbling one. “The Appalachian Trail was a lot harder than I had thought it would be,” admits Dennis. “I definitely underestimated it, and it became a learning experience. I know we’ll be better prepared for the second half, both mentally and physically.”

Dennis and Dakota are seriously into their training for this upcoming summer’s trip to finish the Appalachian Trail. Three-times a week trips to the gym, cardio and weight training there; hiking and biking on the weekends.

They will begin the second half of the trail in May as soon as Dakota is out of school. The second half of the journey will go through Maryland, Pennsylvania, New Jersey, New York, Connecticut, Massachusetts, Vermont, New Hampshire and end at the 5,267-foot Mount Katahdin in Maine.

The Appalachian Trail
AT A GLANCE