This shimmering underground spring and cave system near Ocala has been attracting beasts and humans for thousands of years.

It’s apparent that you will need to duck your head to enter the rocky, moss-laden, cavern shaft leading down into the prehistoric Devil’s Den underground freshwater spring. There is no warning, however, of the necessity to guard your heart, as it most likely will be captivated by the sheer beauty of this unique work of nature. 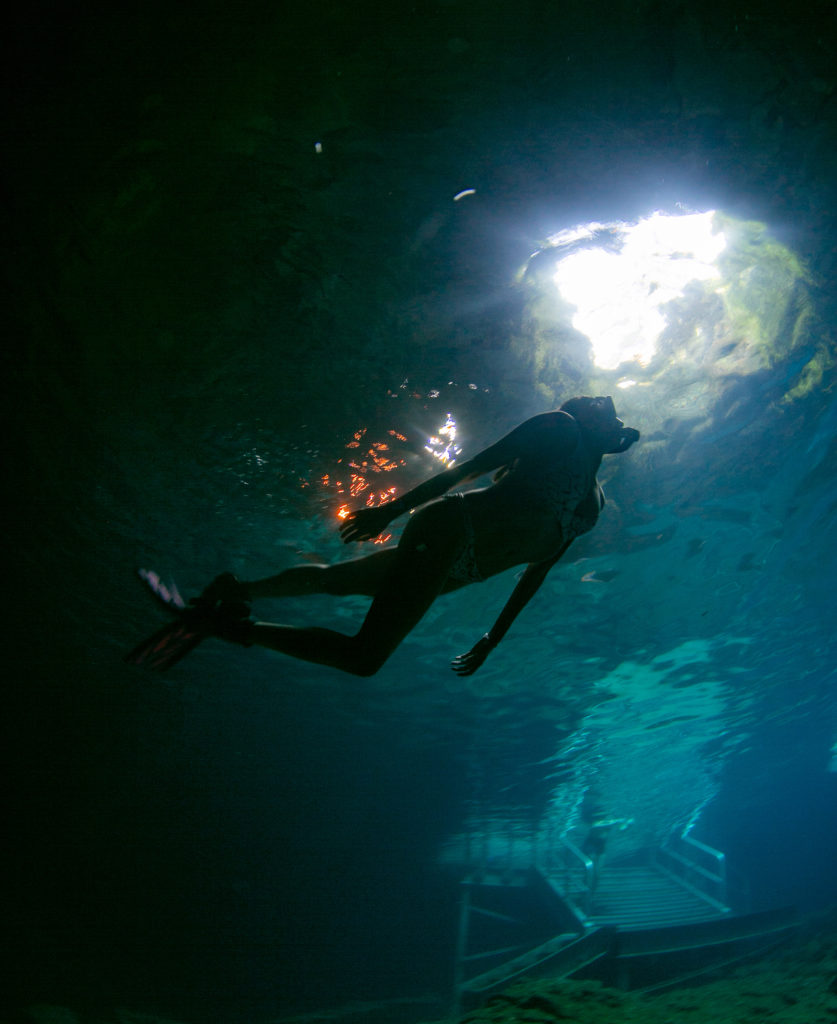 Devil’s Den, just west of Williston, in nearby Levy County, is a karst formation (a type of landscape where the dissolving of the bedrock has created sinkholes, sinking streams, caves, springs and other elements) that features an open hole at the top, through which viewers can watch the scuba divers and snorkelers in the crystal-clear spring water below. The rocky shaft through which one descends to the spring is narrow and, a few steps down, segues to a metal staircase that leads to a central platform and then down again by way of two descending stairways. From the top of the entryway, new visitors often catch their breath as they survey the light-filled cavern and deep blue pool, which is rimmed by dark and mysterious shadows.

The name Devil’s Den is said to derive from the misty haze steaming from the top of the opening, or chimney, on chilly mornings, lending an eerie aura. The water temperature is a constant 72 degrees. The surface diameter of the spring is 120 feet and the maximum depth is 54 feet.

According to Dr. Kenneth Schwiebert, a retired dentist who is one of seven owners of the property, “The hole itself is somewhere between 10,000 and 75,000 years old.”

“People exploring the caves found a bear skeleton that is at the Florida Museum of Natural History at the University of Florida and we were told the bear [species] went extinct at least 10,000 years ago, so that’s how they date the cave,” Schwiebert offers. “It was a unique situation; because it was up high, the skeleton was undisturbed and was fully articulated, meaning all the hard tissue was there, so they have a fully intact skeleton of this bear.”

Schwiebert adds that there are a great many artifacts, such as Native American items, and the remains of “now extinct animals, things that probably fell down in there,” also archived at the UF museum.

The doctor, who came to Williston in 1980, says he first heard stories about the spring being a swimming hole that was popular with area youth, who fastened a rope ladder at the top so they could jump in and swim and then pull themselves back out.

“The farmer got kind of aggravated with the nuisance of the kids jumping his fence and all that stuff,” Schwiebert explains, “and he dumped a bunch of fence wire and trash in the spring just trying to clutter it up so the kids couldn’t swim in there.”

Schwiebert notes that “the guy who was involved in the original startup was from Switzerland and he called his place Euro Palm and wanted to bring European people to get diving certified. It’s so expensive to do in Europe, they could fly over here and do the training and get the benefits of coming to America. In the middle 1980s, a German lady, Anna Lovas, bought this place and she also had the vision of creating a diving destination. The story I heard, when Anna bought it, was that they hauled out over nine dump truck loads of trash.”

Schwiebert says his friend Dr. Raymond Webber, who had been a scuba diving instructor, called him one day and said he wanted to find a “little place to have a fish pond, so I brought him out here and he was blown away.”

“He put together the arrangement where a group of us bought it in 1993,” Schwiebert recalls. “It was a couple of old trailers and a bathhouse. We put in the RV park and pool, expanded the amenities a little bit and have been operating it ever since.”

Webber also discovered an adjacent property, which included an abandoned limestone quarry, and purchased that separately. Over time, he developed it into the Cedar Lakes Woods and Gardens botanical garden.

And, in 2001, Schwiebert purchased another adjacent property on the other side of Devil’s Den, which he, with his wife Heidi, has developed into the Two Hawk Hammock guest house, live music venue and event facility.

Devil’s Den has become an international destination for scuba divers and snorkelers. Only those who are certified divers, or snorkelers age 6 or older (with a parent or guardian accompanying them up to age 18), are allowed to descend into the cavern and spring.

Safety is paramount and all divers must be accompanied by a dive buddy and all snorkelers must be good swimmers. With the onset of the coronavirus, there is now a reservation system in place for those who wish to snorkel, with a time limit of 90 minutes. Certified scuba divers do not have to make a reservation for day access, but must do so for occasional night dives. 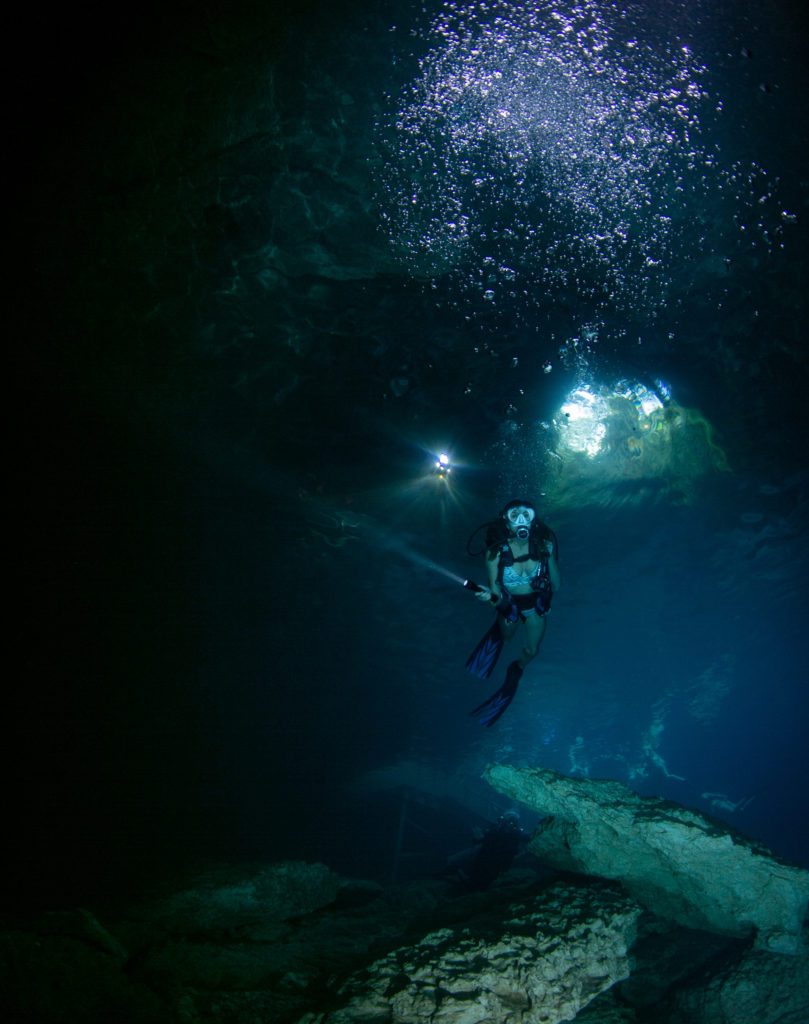 Devil’s Den is often used as a training site for scuba divers. There are two platforms 20 feet under the water on either side of the main landing, which can be used by trainers and students.

“It’s a unique situation because it has daylight access, with light coming from the surface, meaning we can operate as an open water dive,” Schwiebert notes. “It gives an opportunity for someone to experience an overhead environment without being cave certified.”

Guests are welcome to bring their own scuba diving and snorkeling equipment, but those items also are available for rent at the check-in center, which features a small gift shop with snacks and beverages.

Before any diver goes down the entry shaft, they receive a briefing from a staffer on all the rules and regulations, complete with the showing of colored maps indicating the terrain below. There are numerous underwater signs that indicate areas that are off limits.

From the platform by which one enters the water, rays of sunlight beam down from the opening above, which is ringed by bright green trailing vines. Drips of water from the ceiling splatter the heads of visitors and the faint sounds of bats can be heard above. In the water below, massive limestone rock formations dot the bottom. The curvatures of the walls are deeply shadowed. Fish, turtles and what Schwiebert calls a “pretty big” albino catfish make their home in the clear pool.

Cristen Bouchard and David Mercier, from Prather, California, were snorkeling on a recent day. The couple said they had bought a recreational vehicle the weekend the Creek Fire broke out in September 2020 and they had to evacuate. 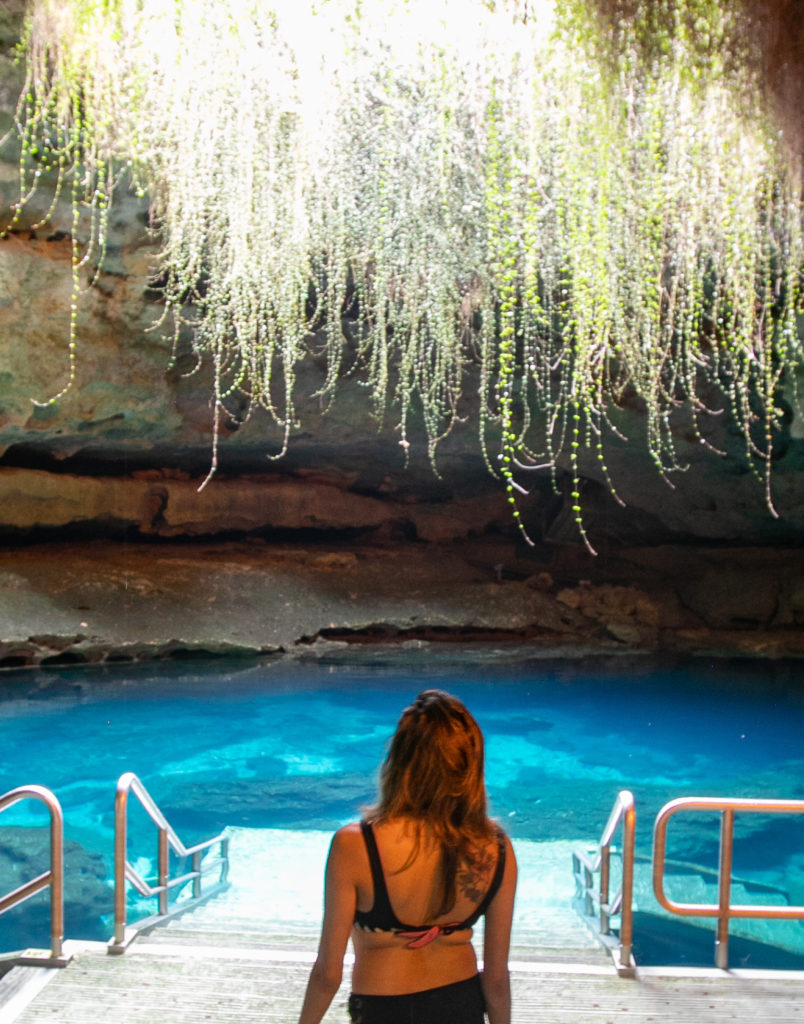 “We moved everything we could and sold our house and took off,” Bouchard offers.  “We’re staying in Clermont here in Florida, and my parents live in Hampton.”

“She found this on Instagram,” Mercier says of Bouchard. “It was astonishing. Stunning.”

“You don’t think of how things like this exist, then you see it and you’re like, ‘Wow!’” Bouchard expounds. “Such beauty and geology of life! I was fascinated by the fish; there were so many of them. I’m like, where did they come from? And the turtle!”

Schwiebert, standing nearby, explains that there are numerous interconnected waterways under the ground, through which the fish and other animals can move through the aquifer.

“This whole area is in the Rainbow River Basin, so the aquifer here basically goes down to Blue Run (part of the Rainbow River near Dunnellon),” he explains. “This whole part of Florida, our water comes from north Florida and south Georgia. And when they have hurricanes further north or a lot of rain, the aquifer can only move the water so fast so it bogs up in these sinkhole areas. I’ve seen water within a few steps of the top of our ladder. We’ve had to shut it down a couple of times, such as after Hurricane Irma came through. It stayed up high for a couple of years.”

The amenities include numerous pavilions and picnic tables, including a number of the latter found on walking paths, such as those that encircle Ray’s Fish Pond, where corpulent and colorful koi eagerly await a handout of fish food from a vending machine nearby.

There is a heated swimming pool and two large changing areas with showers. For those with energy to spare, lawn games include volleyball and cornhole. Charcoal grills are ready for outdoor chefs to cook up some burgers, hot dogs or steaks.

The attraction is open every day except Christmas.

While guests are free to roam and explore in the water and on land, Schwiebert says he hopes they will refrain from leaving their mark, such as trying to carve on the ancient limestone rocks.

“It’s kind of a sacred place in a lot of ways,” he offers. “We are just trying to make it available to people and to also show the respect that something this old and special deserves.”