On a cold December evening, CarolAnn Garratt slipped into her single-engine Mooney and set off from Orlando International with the goal of circumnavigating the globe. Eight days, 12 hours, and 20 minutes later, the Ocala aviator returned with a new world record and some much-needed publicity for one debilitating disease. 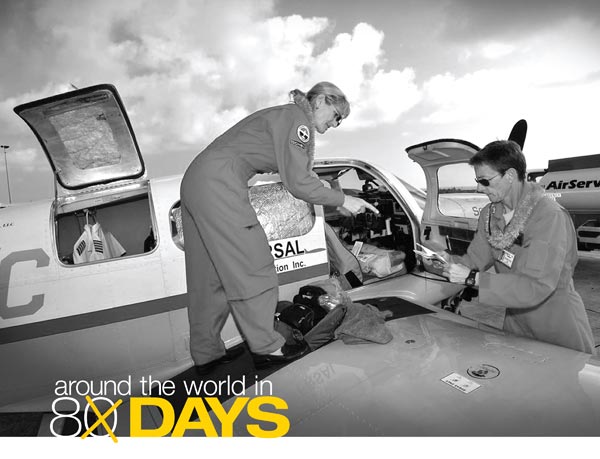 The record hadn’t been broken in 20 years. Despite advancements in technology since Charles Classen’s westbound flight around the world in 1988 in a single-engine plane, no pilot had improved on his 87.51 km/h record, a testament to the sheer endurance involved in circumnavigating the earth. But CarolAnn Garratt had one important advantage on her side when she climbed into her Mooney M20J last December in an attempt to break it—this mission was personal.

In 2002, she lost her mother to ALS, a progressive neurodegenerative disease commonly known as Lou Gehrig’s Disease. The flight was what she called a “dash for a cure,” a way to raise money for ALS research.

“It’s a debilitating disease. The worst part is your mind is 100-percent intact but your body is deteriorating,” CarolAnn says, sitting in her Leeward Air Ranch house in Ocala. “None of the big pharmaceuticals are doing research. Zero.”

CarolAnn, an engineer and a self-described “very logical thinker,” has focused her efforts on supporting the ALS Therapy Development Institute (TDI), the world’s leading ALS research center. A record-breaking flight, she hoped, would help scientists continue their work.

“Engines like to run,” CarolAnn comments, looking over the three spotless planes parked in the hangar at her house. “It’s much better for the plane to fly than sit on the ground.” 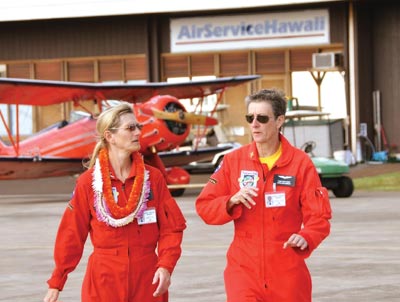 Carol Foy (left) of Spicewood, Texas, joined CarolAnn (right) on the world flight. The two pilots were greeted with leis after touching down in Lihue, Hawaii, from San Diego.

The same could be said of their owner. CarolAnn is an avid flyer, logging 400 flight hours a year and taking off from the mile-long, grass runway behind her house four to five times a week, as often as three times a day. Now retired after 30 years in the corporate world, CarolAnn says her frugal nature and her discipline for saving during her working years have allowed her to enjoy flying full-time.

“I don’t have really expensive things,” she explains. “The only thing I put money into is my flying.”

Preparing for her global trip took 18 months—from planning the route to obtaining permits for every country she would fly over or land in. Carol Foy, a pilot from Texas, agreed to accompany CarolAnn on the trip. Their vehicle would be CarolAnn’s ‘93 Mooney, which had carried its owner around the world once before over several months in 2003.

“It’s the most economical single-engine plane you can get,” CarolAnn explains. “Other planes are a bigger envelope you’re pushing through the air. That takes more gas. The Mooney is a very small envelope. It’s like a sports car versus a Cadillac.”

The flight began at 8:31pm on December 2 at Orlando International Airport. CarolAnn headed west into a clear night lit by a bright moon. After a short stop at Brown Field in San Diego to fuel up and meet briefly with reporters, the two pilots were off again on a 17-hour flight to Lihue, Hawaii.

“We were very tired,” CarolAnn recalls of Lihue. “We’d alternated sleeping and flying every two hours.”

After a few hours rest at a hotel, the pilots returned to the Mooney’s cockpit and took off for Guam. During this, the longest leg of the trip at 23 hours, CarolAnn used a satellite phone to talk to students back in the U.S. who were following the flight. The duo then touched down on the Pacific island long enough to grab another four hours of sleep before heading for Chiang Mai, Thailand.

“We did maintenance in Chiang Mai,” CarolAnn says, “the oil change, air filters, spark plugs. Then we took off, without stopping in India, and landed in Salalah, Oman.”

The 20-hour flight to the Middle East was followed by a quick five-and-a-half hour leg down the Gulf of Aden to Djibouti. There, the two pilots stopped again to sleep—“eight whole hours,” CarolAnn recalls fondly—before heading across Africa to Bamako, Mali. The transcontinental leg revealed a problem, however. The plane was short 30 gallons of fuel, almost four hours of flying.

“We did not receive enough fuel from Djibouti, so we didn’t make Bamako,” CarolAnn says. “We were flying over Africa and the back tank ran dry sooner than it should have. We went to Ouagadougou, Burkina Faso, instead.”

The change should have been a serious problem, as CarolAnn had only an overflight permit for the country. But in a mere two hours, her team was able to secure a landing permit and the early stop proved to be little more than an unexpected detour. Onward they pushed to the Cape Verde islands off the African coast and then over the Atlantic in the final leg. Aided by the best tail winds of the journey, the Mooney raced toward Florida, its pilots trying to beat an approaching cold front.

“Based on the forecast, it looked like we were going to make it,” CarolAnn says. “We knew we had three hours to spare, and coming up Florida, we had super tail-winds.”

On the morning of December 11, the Mooney broke through the low clouds and touched down in Orlando. The flight’s official speed was 185.6 km/h, more than double Classen’s record.

Throughout the aviation community and beyond, CarolAnn’s feat was lauded. Claude Meunier, co-founder of Earthrounders, an international community of pilots who have circumnavigated the globe in light aircraft, believes the flight “will be remembered for a very long time.”

“The important thing here is they were not just doing it to gain fame or personal gratification, but to gather money to cure a terrible disease,” Claude says. “Their flight shows their professionalism, endurance, [and] courage.”

At a special Fédération Aéronautique Internationale ceremony in March in Arlington, Virginia, CarolAnn and her co-pilot were awarded their official world record certificates. As thrilled as she is with her accomplishment, though, CarolAnn admits there are no plans for another world flight.

Her mission now is to continue giving public presentations about the flight and reach her goal of $1 million for ALS TDI. So far, she has received $184,000 in donations. As for the reflections on her accomplishment, CarolAnn is content to leave them to other pilots, like Claude.

“Ever since man first took to the skies just over a century ago,” he remarks, “only 270 pilots have achieved this feat in light aircraft. What they have achieved may not be repeated for a long time.”