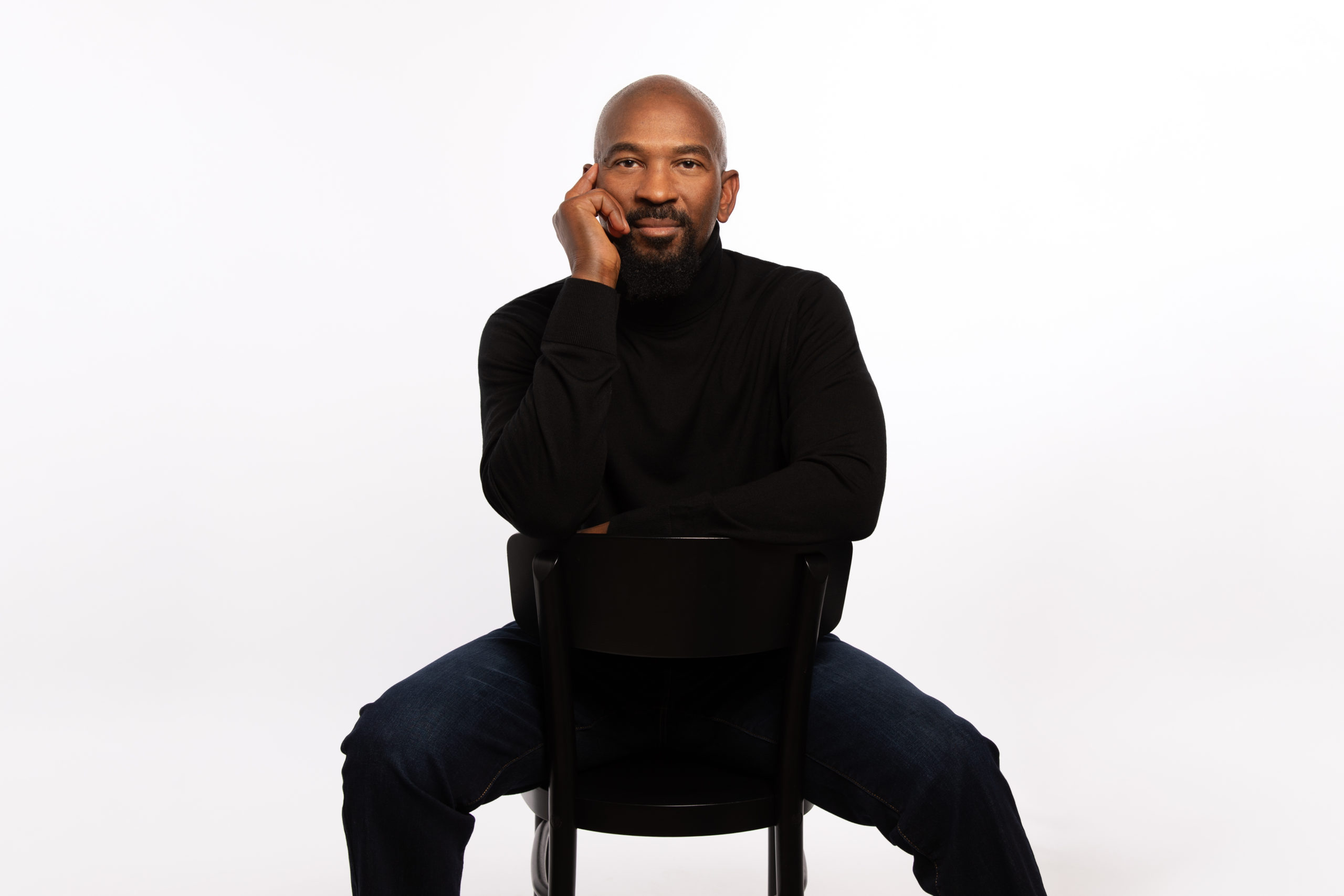 With every stroke of his paintbrush, Ocala-based artist Charles Eady records a bit of Black history unknown to many. You could count Eady among the latter until he began doing research on his family roots. What he discovered first surprised him and then inspired him to become the mixed-media artist he is today.

Walk into Charles Eady’s house and you are immediately greeted by the vibrant oil paintings that live there while in progress and those that come home after being exhibited. All are large paintings, ranging from 36 inches by 48 inches to 43 inches by 70 inches, and are in color schemes of bold rust, deep reds, subtle greens and rich golds. Each commands a wall, insisting that you look at it. And when you do, that’s when the history and art lessons begin. Black Jockey of 1790, the master of the hall entryway, exemplifies Eady’s mixed-media historical art. The 36×48-inch painting features an abstract jockey and racehorse in oil, a photographic silkscreen of an old newspaper article of the time titled Negroes As Jockeys and an impressionism-styled cotton field scene. As with all his paintings, each element is part of a story. “My initial research in 2008 into court documents, county records, tax records and such was to provide my father with historical information about our family roots in South Carolina,” explains Eady, 56, who grew up in Fairfax, South Carolina and graduated in 1988 from Claflin University with a bachelor’s in art education. “I did find Eady on a transcribed copy of the first U.S. Census in 1790, St. Johns Parish, Berkeley County, South Carolina. But there was also a column titled ‘All Other Free Persons,’ which included free Black people living in the county. Eady embarked on a historical journey, leading him to discover that federal census documents from 1790 to 1860 revealed there were more free Blacks living in the South than in the North during that time period. According to Eady’s research, by 1860 there were nearly 10,000 free Blacks and mixed race persons living in South Carolina. “Through county and tax records, I learned that there were nearly twice as many free Blacks owning property in the South than in the North during that time. In St. Johns Parish, Berkeley County, I verified through property tax records that free Blacks owned a $1 million in property in that time period,” notes Eady, still amazed at the uncovered history. Eady was diligent and meticulous with his research. He scoured through the Library of Congress, county and state archives, land grants, as well as census records through the decades, discovering more of this hidden history of free Blacks. “Any lead that I found had to be verified by three sources before I considered it authentic,” asserts Eady, a man perpetually energized by his artistic passions, including teaching art education at Belleview High School since 2014. “I began to believe that if this information could be made available to people, particularly to children growing up, that it would have a profound impact on their ideas about Black history in this country. But I wasn’t sure yet how I was going to do that.” 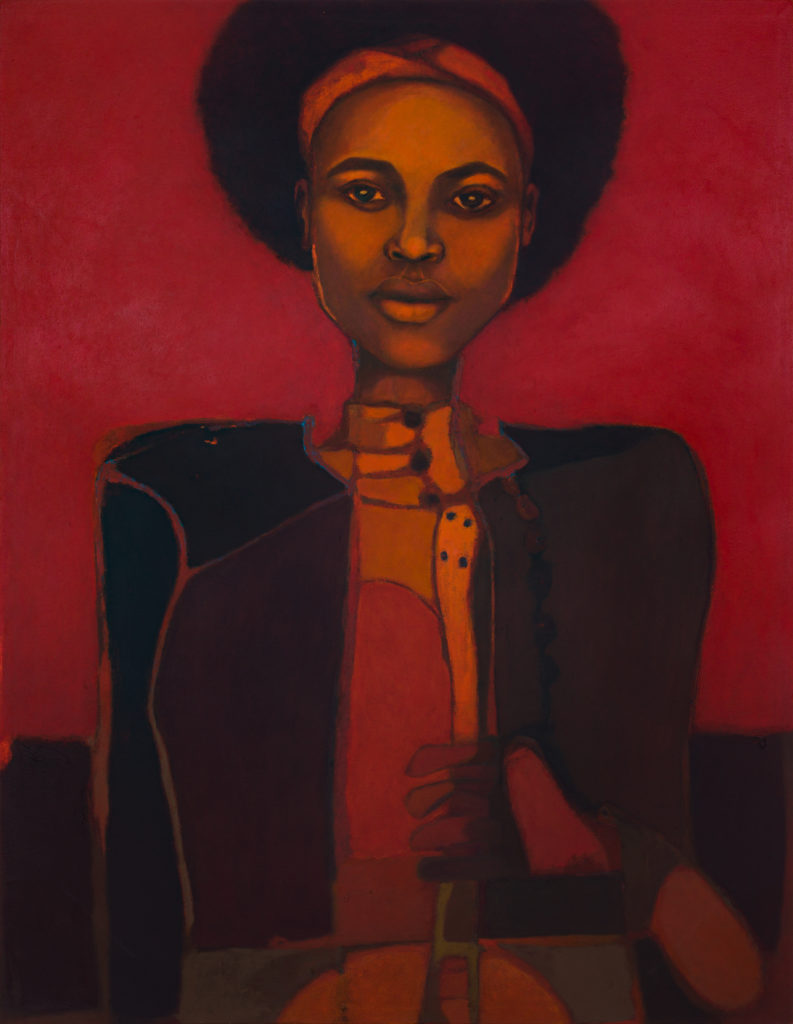 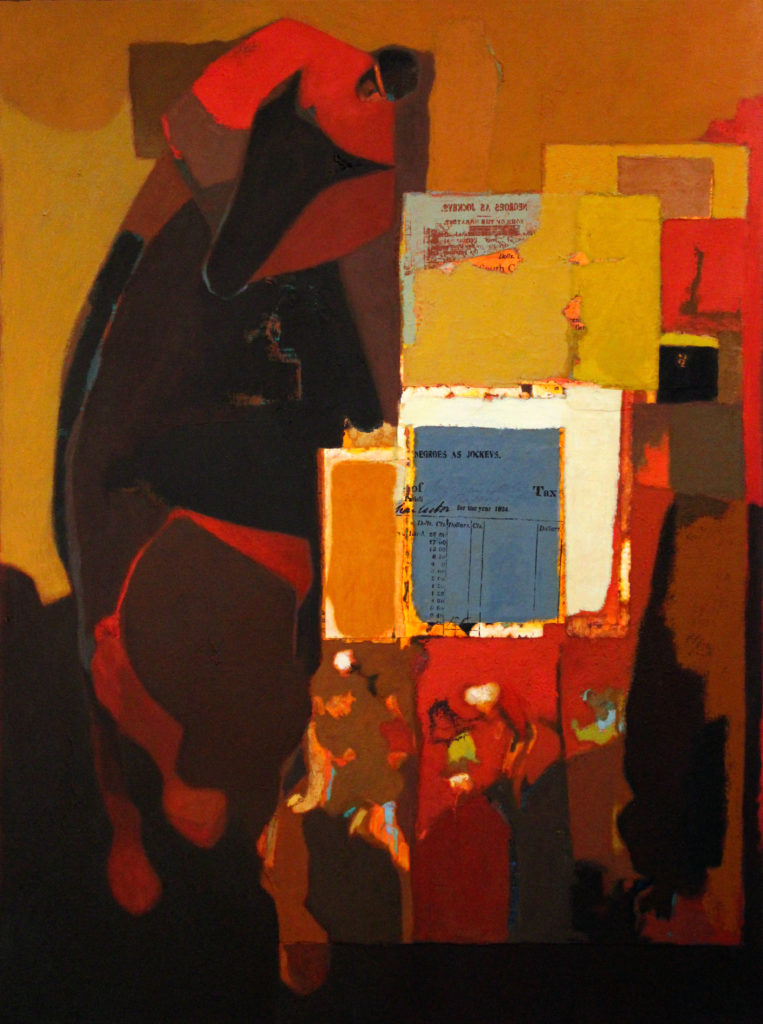 FINDING HIS MUSE
Although he had drawn since he was a child, Eady was still struggling to find his own unique artistic style a decade after graduating from Claflin University. He got married in 1989 and his son Quinn was born in 1990. Eady attended the Art Institute of Atlanta for a year before moving to Jacksonville in 1991. Then one night, exhaustion and frustration delivered Eady his muse.“In 1998, I was doing some part-time teaching but also working other odd jobs at night. I got home late one night, tired and frustrated. I needed to create,” recalls Eady. “I grabbed a painting that I had been working on, but that was going nowhere. I turned it upside down and just started painting on top of what was already there. What emerged was a painting from a picture that I had taken of a cotton field in South Carolina. In that moment, I knew I had finally found my artistic style.”Eady titled the impressionistic-styled painting Cotton Rose and it became his muse. I used it as a reference for a whole series based on it, which became my best sellers,” reveals Eady. “Those cotton fields series paintings are incorporated into many of my historical paintings. But when people ask me about buying Cotton Rose, I tell them it’s not for sale.”With his art on track, Eady attended a teachers’ recruiting conference in Orlando in 2001. He applied for and soon accepted an art teacher position at Sunrise Elementary School in Ocala.”One of my jobs while I lived in Jacksonville was being the Florida sales rep for an education sales company,” shares Eady. “Ocala was part of my territory, so I had become somewhat familiar with it. I was delighted to get the job at Sunrise Elementary and the plan was to move my art forward while I taught.” 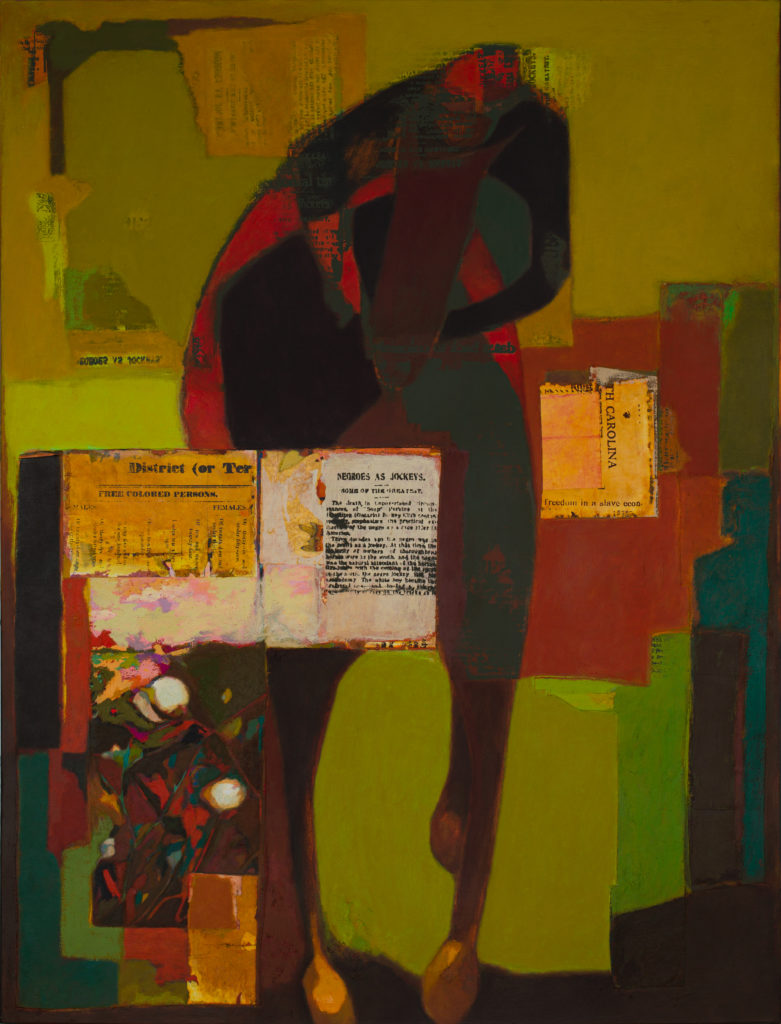 ART FLOURISHES
All of that historical research Eady had done became boxes of documents, which would then be transformed into his first exhibit in 2013. Aptly titled Hidden Freedom, the 35 oil paintings, all 28×30-inches in size, featured historical silk-screened documents layered on oil canvas. The collection was on exhibit at the Arthur Rose Museum at Claflin University.“This first exhibit was huge for me. Through my art, I was so excited to finally be able to share the little-known history of free Blacks in the South before the Civil War,” says Eady. “The exhibit was very well received. But I kept feeling like I needed to do more.”And do more he did. In 2018, Eady published a historical fiction book titled Hidden Freedom: The South Before It Was Racist. 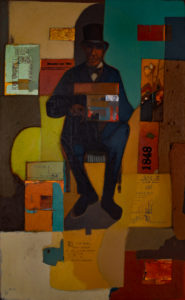 The book’s characters were free Blacks who lived in Eadytown, which was an actual town that Eady found through his research. “I wrote the book to bring life in some way to the free Blacks of that time,” says Eady. “As an educator, my thinking was the book could help people look at that history in a different way. I wanted to bring to light history that opens up dialogue to uplift all of us.” The book’s cover was inspired by a 43×70 inch painting, which Eady also dubbed Hidden Freedom. It was the first painting Eady created that featured a free Black person and not just historical documents. The Black man, a real estate owner wearing a top hat, was inspired by a document that Eady came across titled Charleston Free Negro Real Estate. Hidden Freedom, the painting, would be accepted into the ArtFields Festival in 2019. Based in Lake City, South Carolina, the community nonprofit ArtFields Collective hosts the annual ArtFields Festival every April. Local businesses display hundreds of artworks and artists compete for $100,000 in prizes. “Being accepted into ArtFields that first year was a very big thing for me,” says Eady. “I realized adding people to my historical paintings made what had been a missing connection.” Eady’s first national exhibit was in 2020 at the Barrett Art Center in Poughkeepsie, New York. In 2019 and 2020, Eady’s American Jockey and Black Jockey of 1790 were selected, respectively, as Best in Show at the College of Central Florida’s Webber Gallery exhibits. American Jockey is now on permanent display at the Appleton Museum of Art, where Eady has taught summer art workshops for youth. “Artist and educator Charles Eady epitomizes how to create unique works of art that elucidate untold stories from history,” says Jason Steuber, director of the Appleton Museum of Art. “His artwork is accessible, visually striking and very much relevant to our everyday lives.” 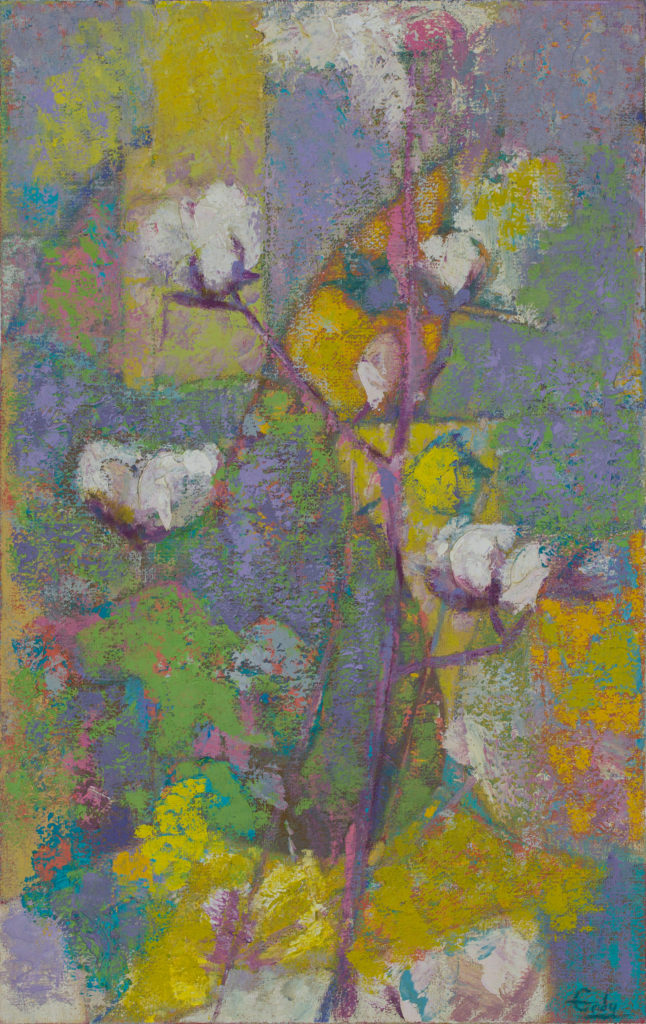 ANNA AND PAINTING FORWARD
Eady’s work shifted again when he painted Anna, a character from his book. Anna, the painting, does not include any historical documents, it only depicts a young Black girl with a resolute stare bringing her history to the present. “In the book, Anna was determined to read and secretly learned from a boy who would visit her on Sunday afternoons. He taught her by writing alphabet letters in the sand with a stick,” explains Eady. “When the boy asked Anna why she wanted to learn to read, she said, ‘I want to read myself free.’ I often wondered what Anna looked like, so I decided to bring her to life on canvas.” Anna did indeed take on a life of her own. Accepted into the 2021 ArtFields Festival, she won the Grand Prize and is now on permanent display as part of the ArtFields Collective at the Crossroads Gallery in Lake City, South Carolina. “Charles Eady’s Anna tells an important story that we’re proud to help share,” says Jamison Kerr, the art director of ArtFields. “Charles’s storytelling through his artwork is stunning. With Anna, he does a great job of showcasing strength in her eyes and stance. The portrait captures you and holds your attention because you immediately get a sense of who Anna is.” Now that Anna has found a new home, Eady has painted Polly, yet another character from his book. Polly is described by Eady as “the voice of reason.” In the 38×48 inch oil painting titled Afros And Banjos, Polly is holding a small banjo as a symbol of the joy of music in her community. Afros And Banjos may be part of Eady’s 20-piece solo exhibit in 2023 at the Appleton Museum of Art. And Eady will soon be chronicling some of Ocala’s Black history. He’s been invited to paint free-standing art panels at the Heritage Trail Park in West Ocala. “I am so honored to have been chosen for the Heritage Trail project and a solo exhibit at the Appleton Museum,” says Eady, whose art studio is in the garage of the Ocala home he shares with his 18-year-old son, Alex. “I still haven’t wrapped my mind around everything that has happened with my art since I first began researching my family history 13 years ago. I am so grateful and humbled by it all.”