In an ordinary guest room in her ordinary home in an ordinary Ocala neighborhood, artist Mel Fiorentino is creating the extraordinary. The phenom who took the local art scene by storm over the past several years is now attracting interest from the region and beyond. Though she wasn’t born here, she’s called Ocala home since age 7, and, no matter how much notoriety she gains, she’s committed to improving our local art scene. 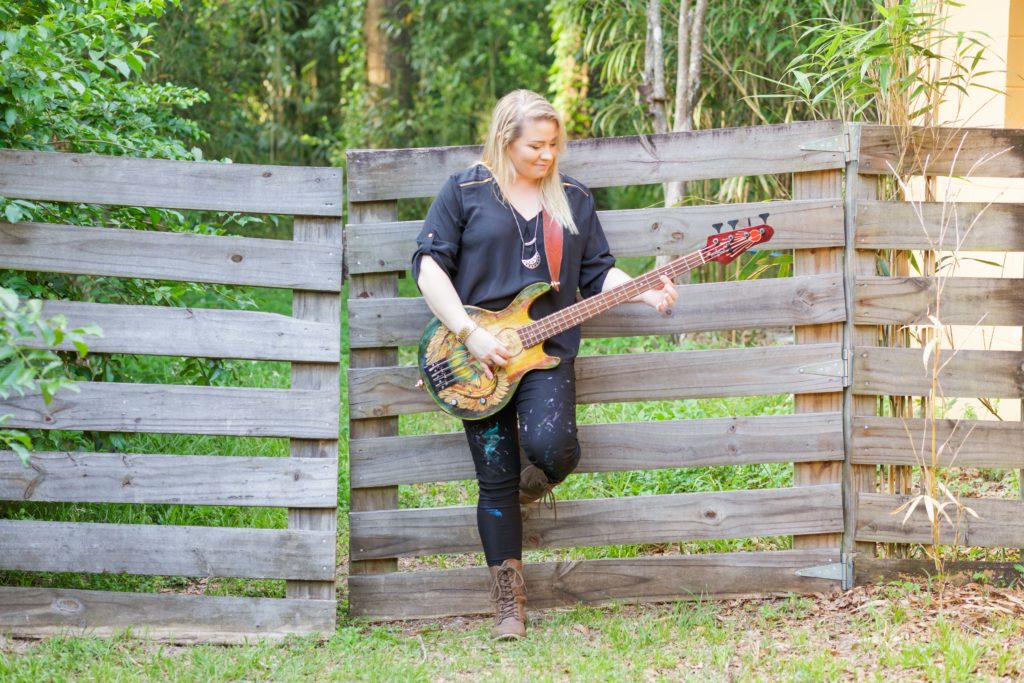 Back in high school, Mel enjoyed drawing and pottery. She started painting while a student at the College of Central Florida, learning to realistically portray the human body through nudes, and says one of her biggest influences was Dutch artist Piet Mondrian, whose early work used lines to evoke an image. The confluence of these two styles was the nude with Mondrianesque lines she did “to impress her husband.”

“We were dating, and I did this really big painting to try to impress him—I wanted him to think I was a real artist,” she explains. Obviously it worked, and the painting hangs in their living room today; it’s the one piece she’ll never sell.

These days Mel and husband, Jeff, enjoy collaborating on art and music projects, which comes naturally because he loves playing the guitar and she considers music her “other” passion. She bought her first drum set around the same time she started painting and says she devoted an equal amount of time to art and music for several years until she got so busy painting portraits and commissions that art took over.

Their first “art guitar” collaboration is exquisite—truly a one-of-a-kind labor of love. Jeff, who Mel says “can build anything,” was working on building the guitar and asked her to “put something cool on it; something badass.” But Mel’s vision was more than mere paint. First she took five hours to wood burn the image, inspired by Egyptian mythology, and then she painted it and added liquid gold leaf to the piece they call “The Scarab.” Now Jeff is encouraging her to paint David Bowie on a guitar.

And that’s a subject Mel knows well. After Bowie’s death in 2016, Mel did a tribute piece that attracted the attention of a collector, who has since commissioned her to paint more than 25 Bowie likenesses, which she says helped her discover the legend’s beauty and genius as she quickly figured out that listening to his music while painting him was key to understanding her subject.

“I feel like it’s a way for me to step into their mind, to understand their character better so when I’m painting I can tap into that.” Mel found she enjoys bringing celebrities to life on canvas, and she’s painted a wide range of musicians, actors, authors and scientists who intrigue her, listening to their music, talks online or audiobooks for inspiration. 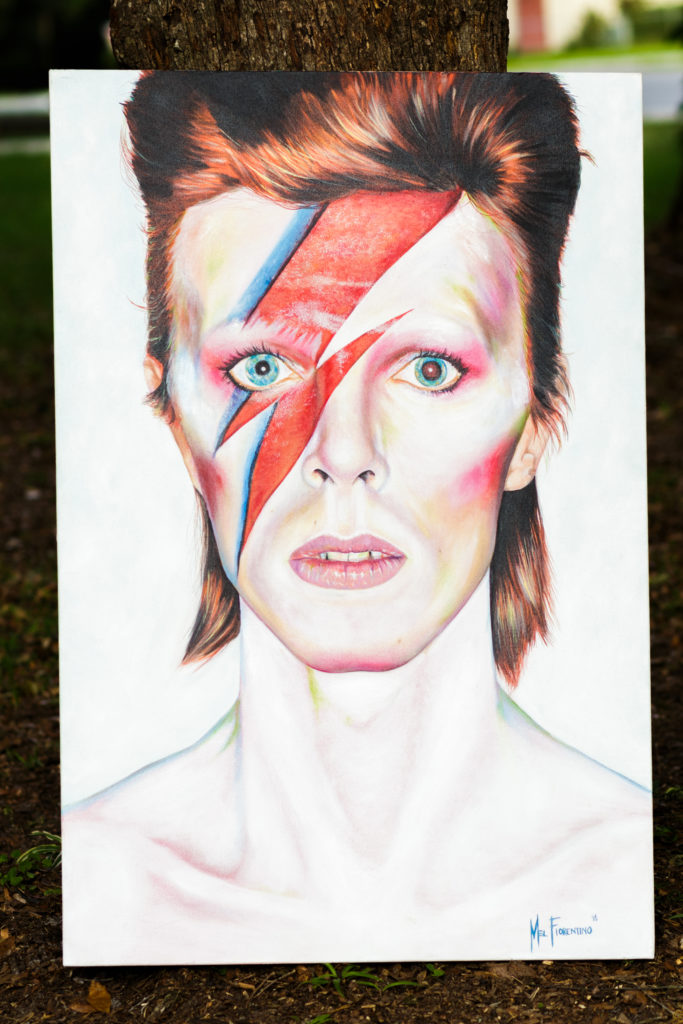 Because she creates in her home studio, this working mom isn’t missing out on any time with her son, Lincoln, who’s not yet 2, and daughter, Autumn, who’s 5.

“I love the fact that my studio is right in the middle of the house,” she says. “I never thought I would be able to be here all day with my kids. And paint. And listen to music all day. It’s great!”

Mel plans to homeschool her kids, making sure art and music don’t take a backseat to the traditional subjects.

“I would be so upset if they didn’t have the opportunity to do art,” she explains, adding that Autumn has her own easel where she paints with watercolors and that she’s about as accomplished a drummer as any 5-year-old can be. Mel has a feeling that Lincoln will grow up to be an artist—at just 18 months old he loves to pick up a paintbrush and pretend to help her in the studio.

In addition to instilling a love of art in the next generation, Mel spends time helping newer artists get their start through her work on the board of the Magnolia Art Xchange. She encourages young artists to “not be shy about getting themselves out there.”

“One of the biggest misconceptions people have is that somebody is going to ‘discover you.’ But I’ve always thought, ‘I don’t want to wait for somebody to discover me; I want to do it myself.” Mel is her own publicist, which has helped her gain local recognition through events, including First Friday Art Walks, the FAFO Ocala Arts Festival and Couch Sessions; exhibits like the City of Ocala’s Art In City Spaces initiative; and her largest undertaking, the S-curve mural in downtown Ocala.

Earlier this year, Mel drew the attention of a little company called Disney; she was invited to show her art at the six-week-long Epcot International Festival of the Arts. She painted live in front of the House of Blues and sold a lot of paintings and prints.

“It was the first time something really big came to me,” she says. “It was a really awesome break.”

No matter how busy she is, Mel feels it’s important to support charity projects and has donated a lot of art. She helped raise money for the Reilly Arts Center by live-painting a David Bowie chair at last year’s Couch Sessions and donating a piece to their annual gala. After finding peace through painting her biological father who passed away, she realized how she could help others by painting their deceased loved ones, and she supports a local charity called Picking Up The Pieces by donating portraits of family members lost to drug overdoses.

“I started feeling like maybe one of my purposes is to bring them back to life, even if it’s just for a second,” she explains.

With her amazing talent and heart of gold, Mel is making our community a little better, one painting at a time.