Whether you’re a motorcycle enthusiast or just appreciate a unique piece of artwork, the one-of-a-kind exhibit at the Appleton Museum of Art is a must-see. Guest curator and photographer Tom Zimberoff’s vision of an exhibit celebrating the artists behind the motorcycle is now a reality. The exhibit was inspired by Zimberoff’s two Art of the Chopper coffee table books.

“I love motorcycles,” he says. “The books and magazines I was reading were always about the owner of the bike, but there was very little information on the artists who created these machines and the styles they used.”

Previously at the William J. Clinton Presidential Library in Little Rock, the Art of the Chopper exhibit features 30 bikes accompanied by a portrait of the artist who built it.

“The collection came together through years of research, based on my own understanding of motorcycles and aesthetics,” adds Zimberoff. “There will also be plenty of surprise elements as well. These bikes are like Fabergé eggs on two wheels. They’ll make your jaw drop.” 8 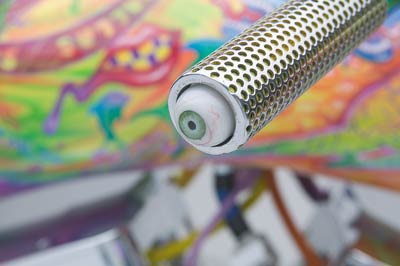 The psychedelic paint job on “Bettie” is enough to make anyone stop and take notice. One has to wonder how an artist could come up with something so intricate and creative. According to his website, Rick Fairless began working in his uncle’s paint store when he was still a teenager. After making his way up the proverbial corporate ladder, his uncle’s chain of stores was bought out by paint giant Glidden, and after 20 years with that company, Rick craved a change.

A natural artist, he enjoyed customizing Harleys and decided to take a chance and open an Easy Riders bike shop. Today, the company is called Strokers Dallas, and his eclectic style is second to none. I could spend hours gazing over the detailed designs, shapes, and images he creates on his one-of-a-kind choppers—and I’m no motorcycle aficionado.

“I designed the ‘Bettie’ bike on a plane ride,” Fairless says in a quote on motorcyclemonster.com. “I drew it up just kinda doodling, a look that I haven’t seen before. It’s curvy, just like Bettie Page. I really dig it.”

Eddie Trotta “exhibits all the traits of an artist,” according to the Thunder Cycle Design website. He often wakes in the middle of the night to make design sketches. Trotta’s bikes, which require upwards of six months to create and start at $35,000, are truly works of art. Trotta and Thunder Cycle Design in Fort Lauderdale have been commissioned to design bikes for hall-of-fame musicians and athletes, including Aerosmith’s Steven Tyler and former Pittsburgh Pirates slugger and six-time MLB All-Star Bobby Bonilla. “Camel Three” was commissioned by the second-largest tobacco company in the U.S., R.J. Reynolds—surprising that they didn’t add smoke stacks on the back of the bike, huh?

Nicknamed “Nobody,” Vince Doll is anything but in the world of motorcycle design. His Redneck Engineering shop in South Carolina is well-known and Doll has created a multitude of bikes. While their variety is extensive, the bikes all share a family resemblance, “including horizontal six-sided axle boxes, an idiosyncratic swoop above the transmission that supports a slammed saddle, and a rear fender so close to the tread that you cannot insert a silver dollar between the two,” says Zimberoff.

When you think of the word ‘chopper,’ you may think of a bike with its front wheel extended forward, high handlebars, and a low seat. Think Easy Rider, the 1969 classic starring Peter Fonda and Dennis Hopper. Motorcycle designer and artist Mondo epitomized that style in this chopper, complete with purple flames. The bike is appropriately named after the iconic biker film.

Close your eyes and picture an action movie scene—a heavy-rock soundtrack thumps in the background as the well-built, ruggedly handsome antagonist weaves in and out of traffic, leaning forward as the bike takes off. This is what I see when I look at Kimura’s “Spike.”

“Kimura’s designs don’t follow the parade of chrome-plated, technologically freighted, and extravagantly painted confections that some old timers call Easter eggs,” Zimberoff writes. “While they may look like they could dump oil at any minute, these are put together like fine Swiss watches—okay, maybe Seikos.”

When creating “Swingshot,” Dotson set out to “create a motorcycle that would evoke obsolescent excellence,” a bike that could have been built with “vintage parts and technology,” says Zimberoff inArt of the Chopper.

The bike’s concept and inspiration began with race bikes from the ‘40s and ‘50s, says Johnny Humble on bikernet.com.

“He wanted to build the bike using technology that was available for the time,” says Humble. “The panhead was chosen because of the visual aesthetics. He chose a kickstart-only transmission to complement the period-correct vintage styling and functionality. The seat is a cowhide-wrapped seat pan that sits curiously on a canti-lever suspension system utilizing engine valve springs.”

And to think, “Swingshot,” which took a little more than a year to build, is the first bike Dotson created from start to finish. Imagine what the future holds!

Zimerboff calls Mike Brown’s “Holy Roller” “the most improbable motorcycle anyone has laid eyes on.” He goes on to say that “it has no readily discernible brakes or suspension, no driveshaft, no belt drive, no chain, and no downtubes to support the engine in the frame. Most startling of all, there are no axles, no hubs to hold the wheels on, just two loopholes big enough for a lawyer to crawl through. Not only does it look incapable of locomotion but just the fact that it can support itself upright seems like a miracle.”

Though Jerry Graves, one of the most artistic bike designers, passed away earlier this year, he will always be remembered as a true artist. Just look at his one-of-a-kind creation, “Mad Rat”—colorful, curvy, and stylish and impossible to compare to other bikes. Jerry himself said he wanted his bikes to look “cartoonish.” Mission accomplished. Zimberoff can’t deny Graves’ style and artistry either.

“These bikes are all wound up and ready to explode with frenetic, even sexual energy,” he writes. “But for all the hooptie, he keeps wires, lines, cables, and tubes tucked away, not to muck up the interstices between major components. And he tries to make his contraptions as rideable and safe as a 10-and-a-half-foot-long motorcycle can be.” 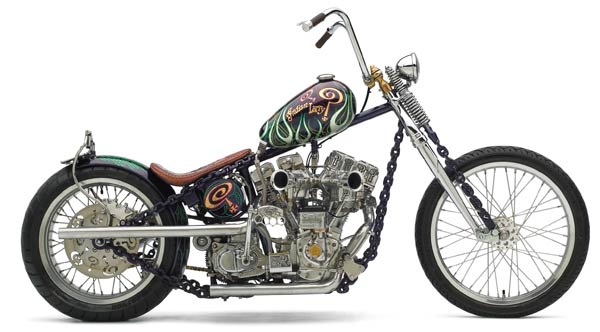 ‘A Cross Between A Top-Fuel Dragster And A Road Racer’
Bike: Chain of Mystery
Artist: Indian Larry

Indian Larry’s foray into the world of bike design began after a stint at Sing Sing state prison. Once out, he learned mechanic skills and eventually delved into painting cars. When he met Von Dutch, the legendary pinstriping artist, Larry decided to become an artist himself and set up shop in Brooklyn.

Larry envisioned his bikes as a cross between a top-fuel dragster and a road racer. He refused to sacrifice performance for visual effect, but at the same time he also had an appreciation for decoration, says Zimberoff in Art of the Chopper. “Chain of Mystery,” Zimberoff adds, even incorporates several of Larry’s own tattoos laid on by master engraver CJ Allen. The bike also features an Indian Larry trademark—the oil filter hanging behind the transmission instead of mounted in the crankcase.