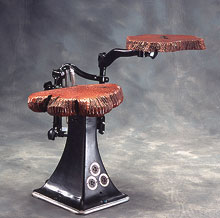 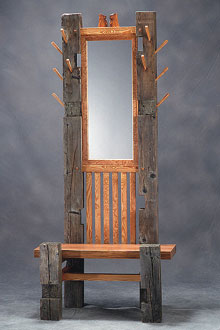 A new style is emerging from north central Florida. It can be seen not only in the many canvases of the artists who have been painting here for 30, 50 years or more, but in music, writing, and other media as well. Furniture maker, sculptor, and Icehouse Gallery proprietor George Ferreira is making his own contribution to what one may dare call a genre, a unique style that springs from and belongs only to this part of the world.

“Sometimes I get bulldozings, or I’ll go down to south Florida to get woods like bamboo that aren’t freeze hardy, or dig up a piece someone tells me about. I got a great piece knocked over when they built the Sun Bank in McIntosh 17 years ago.”

The furniture created from these native materials in these two distinct styles has one thing in common: a finish demonstrating a degree of craftsmanship that can only be achieved with the right tools in capable hands. Whether it involves air drying a piece of cypress for three years, or chiseling a compound joint to a perfect fit, uncompromising attention to detail is part of every piece produced by George.

His efforts produce the desired results.

“Air drying takes one year per one-inch thickness of wood. But air drying produces fewer cracks [than kiln drying] and gives a richer color,” he explains. “If I’m doing a commissioned piece, I let the people come in and look at the wood. I’ll make a mock up with the actual wood just to get the idea or concept. Projects you make with it [the wood] have to be worth the wait.”

That understatement says a lot about the man, who settled in Gainesville after serving in the Army where he was assigned to intelligence work. George was stationed in Turkey and in the Philippines, monitoring radio traffic during the Vietnam War. Perhaps doing all of the careful listening is when he developed the patience required to do fine work and not compromise on his vision of the finished piece — “listening” to the wood.

After studying “everything under the sun,” on the GI bill, George made art his profession, renting the very studio in McIntosh that he re-leased in 1993 and today shares with other artists, friends of 30 years (see Ocala Style, May 2003).

“I USED TO CARE, BUT THINGS CHANGED.” The wry words of a cynic painted in yellow on a cypress log in his studio (located down the street from the Icehouse Gallery). George says this is a sentiment expressed long ago, but the words stay with you as you walk around this well lit, airy space trying to take it all in. True enough, the sign is not in sync with the man who even in the shortest conversation seems friendly, compassionate, astute, patient, and downright optimistic. This dichotomy perhaps reveals the difficulties encountered along the way in the life of a full-time artist. And George is definitely working full time — with some very positive results.

In the Icehouse Gallery (owned with partner Barney Gardiner), he gathers some of the best talent in north central Florida under one roof in out-of-the-way McIntosh. The gallery opens its door to art lovers in this neck of the woods and to folks just passing through, with new shows going up every-other month or so. George gives careful consideration to a theme that reflects the nature of the area and what he feels needs to be said about it.

In putting the shows together, he makes a special effort to contact the right artists, calling in favors from friends who might happen to be, say, retired professor of Fine Arts at the University of Florida Jack Nichelson (now on exhibit at the Harn) or Melrose-based painter Kathleen Wobie who often exhibits at Icehouse. The results are a delightful sampling of the work of the area’s finest artists. George knows each one personally, and as he shows you around the gallery, he talks enthusiastically about the work of each one. Fish Camp: Florida’s Lost Icons is going up at the end of July and will highlight what George feels are disappearing symbols of authentic Florida.

“When I was a kid growing up in the panhandle, fish camps were all over. When you went to the beach, or wanted to get shiners, or a Coke, you went to fish camps. They usually had a bunch of old guys sitting around who owned the camp, and there was funky stuff everywhere: signs, nets, things washed up on the shore.

These guys, some of whom were artists, made things out of it. I guess that was a pretty big influence on me,” he reminisces.
“It’s kind of sad because most of these guys were bridge tenders,” he continues. “They had fish camps because they were there anyway to take care of the bridges. With high rise bridges, these guys are gone and so are the fish camps.”

This new show will coincide with the opening of his Fish Camp Furniture store, featuring — You-guessed-it! — a style which is original to this area. George developed his own take on this furniture made from palm fronds and cypress after being introduced to it by Ty Tyson of Micanopy. It fits in with George’s fascination for ‘50s Florida objects and touristy-style art.

George’s first artistic outlet is as a furniture maker, where demand for the Florida Ranch pieces keeps him busy with recent sales to buyers in Texas and North Carolina. He is also preparing pieces for the Philadelphia Furniture Show and doing custom work. You can also see the influence of Shaker furniture in Florida Ranch, as well as that of George Nakashima, a Japanese-American artist who was making furniture in a similar style as early as 1954.

His other discipline is sculpture, which he creates out of odd pieces in his studio, partly to relieve tension from the tedious details of furniture making.

“It helps me to relax,” explains George. “Sometimes woodworking details like butterfly joints start out with a surgeons scalpel and chisel to get those lines just right. After working on that a while, I just want to drive a nail into something.”

Little is wasted in the studio as “found” objects, pieces and scraps from furniture making, end up as sculpture.

“It works out well for me because in furniture, you have all of these very sharp tools. You take a hard material that has its own patina, like lightered knots (resinous pieces from heart pine). You almost don’t have to sand it, like stone. I use a scraper instead of sandpaper.”

Looking at his space in his studio, you can see about 20 works in progress all around. “My area is laid out so that the found objects I make are sitting on the periphery of my vision. The most boring part of furniture making, after you’ve conceived it and put it all together, is the sanding. So when I have to take a break, I walk around and make a little sculpture. It’s very spontaneous because all of my pieces are within reach.”

Maintaining this schedule reveals an ambition.
“I really believe that I have something to say — that I was put on the planet to make art.” He also loves being in McIntosh. “I believe in this area — its talent and the potential of Marion County.”
It seems for George Ferreira, things have changed. Again.

Paula King is the Chairman of the Board of Directors of Marion Cultural Alliance. She may be reached at paula@ocalastyle.com

George Ferreira’s work has been exhibited at:
The North Miami Center of Contemporary Art
The Micanopy Center for Modern Art
The Thomas Center Gallery in Gainesville
The University of Florida