Commerford may have been born in Iowa and raised in Minnesota, but she likes to infuse her artwork with a little big-city type bling. And hip-hop music is her muse of choice to bring that out. Play some Black Eyed Peas, maybe Jay-Z or 50 Cent, and Commerford is one jamming and inspired artist. 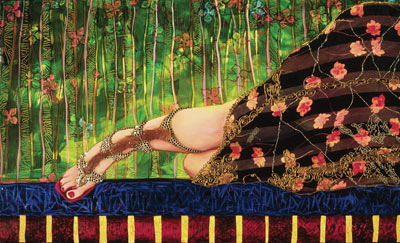 “Art, whether it’s painting or music, is all about energy,” says Commerford, whose late father Donald Andrews taught high school music and was part of a jazz trio. “I grew up listening to all kinds of music and I still do. But hip-hop music just taps into the energy that I need to do my art.”

For Commerford, the synergy is definitely working.

Her unique mixed media artwork features a range of ever-evolving subjects as diverse as hearts, designer shoes and dresses, dolls, martinis, landscapes, portraits, and abstracts. Favoring a grand scale, Commerford’s art comes alive via layers of acrylic oil in outrageously bold saturated colors that tend to make one initially take a step back. But in the next instant, you’re drawn back in. And then you see the bling. 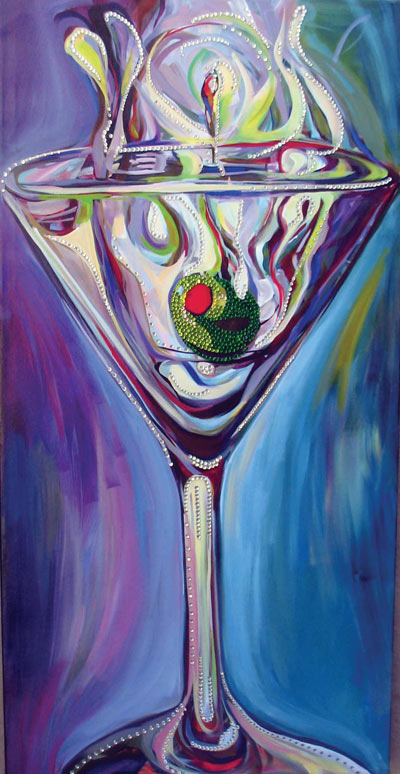 There, interspersed in the layers of acrylics are tiny faceted crystals. Some larger Swarovski crystals, others strategically placed rhinestones. Color reflecting color, each bit of sparkle bringing the painting to life. Ah, and now come the smiles.

Of all her subject matters, perhaps Commerford’s heart paintings most embody her creative spirit. And, of course, Commerford’s hearts are not the kind found in the standard issue box of Valentine’s Day cards. Sure, there are some red ones, but hues of red so unbelievably rich and different that you’ll blink. Hearts in effervescent blues, purples, and greens. Hearts illuminated by bling.

The latter is just what attracted Stephanie Hollander to Commerford’s art and her hearts. 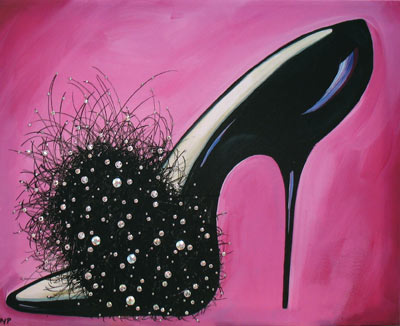 “I’ve always liked anything that glitters,” says Hollander, whose friend passed along Commerford’s website to her. “I fell in love with P.J.’s work right away. It’s just so original and I knew it was perfect for me.”

Hollander first commissioned Commerford to do an anniversary present for her daughter and son-in-law. The painting featured two large hearts flowing together, joined by three smaller hearts representing the couple’s three daughters. So pleased with that piece, Hollander commissioned another one for herself. A much larger and complex piece, this one featured two hearts for Hollander and her husband with nine smaller hearts representing their grandchildren. In each grandchild’s heart, Commerford cleverly embedded the initials of each child’s name in tiny crystals. The 30×40 painting, primarily purple accented by pink, green, and turquoise, hangs in Hollander’s dining room.

“Every time I look at that painting,” says Hollander, “I smile.” 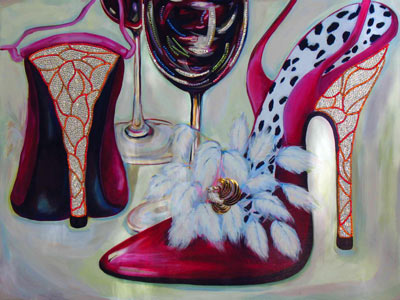 Commerford clearly remembers the first moment she knew she’d be an artist, the first thing she ever painted. She was five and the painting was a watercolor of a tree in kindergarten class. Four decades later, Commerford’s creativity continues to flourish.

“I remember that first stroke and how a tree magically appeared,” recalls Commerford, who was always fascinated by the shiny things in her mother Kay’s jewelry box. “From then on, I knew I was going to be an artist.”

As Commerford pursued her passion, she took many divergent paths. True to her free-spirited soul, she mixed the conventional avenues with those more Bohemian, an artistic-themed odyssey that would take her out of the Midwest, back and forth to Europe, and across the United States. Stops of note included a 14th Century English castle, the beach in Crete, New Orleans’ French Quarter, and a junkyard in Atlanta before finally settling down in the Sunshine State. 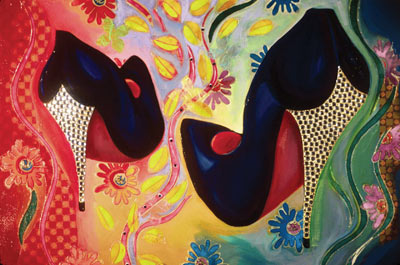 While attending St. Cloud State in Minnesota in the late 1970s, Commerford landed her first paying job as an artist.

“A new amusement park opened and I got a summer job drawing caricatures,” she says. “I would draw a hundred a day and my cut was a dollar for each one. That was pretty good money for a college kid back then, the best education in making money with art that I ever got.”

Through a St. Cloud State student program, Commerford signed up for a semester at Alnwick Castle in Northumberland, England. The 1,000-room castle has now become famous as the location for the Harry Potter movies’ Hogwarts School of Witchcraft and Wizardry. But to college sophomore Commerford, it was a rather boring 14th century castle and the rest of Europe beckoned. Off she and a friend went, hitch-hiking around the countryside of Russia, France, Scandinavia, Italy, and Greece, including Crete.

“We traveled light and mostly slept in our sleeping bags. In Crete, we slept on the beach,” says Commerford, who transformed herself from Patty Jean to P.J. during this time. “My favorite thing to do was to go into bars, find good-looking men, and tell them that they were so handsome that I just had to sketch them. Then, of course, they would buy the sketches and we had money to eat with.” 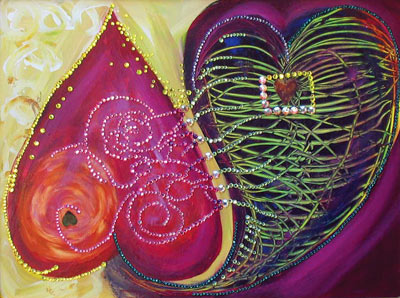 When Commerford’s parents reported her missing, it was time to return to the real world. By then, her parents had left the Minnesota cold and had moved to Pensacola. Commerford joined them, later enrolling at the University of North Florida in Jacksonville.

Staying put long enough at UNF to earn her bachelor’s in fine art, Commerford was even an adjunct professor for a time. But when an Italian artist visited for a showing of his work, Commerford went back to Italy with him.

“I couldn’t resist the opportunity to study with someone so talented,” Commerford says, admitting this was also when she dyed her hair pink and blue. “I had faith that if I kept living my art, the right path would emerge.” 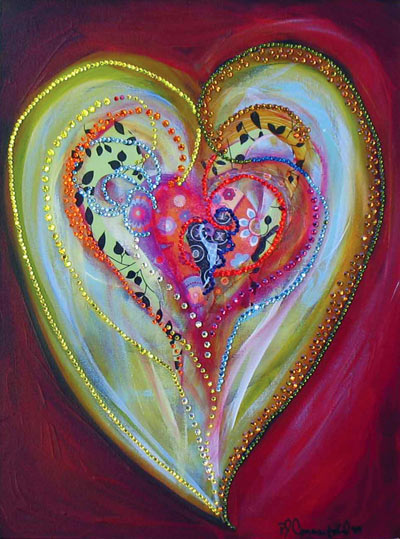 When she returned from Italy a year later, Commerford received an art scholarship from Florida State University. While working on her master’s degree, she was contracted by Scotch whiskey maker Dewar’s to do caricatures of Tallahassee politicians.

“I did hundreds of them,” says Commerford. “As far as I know, a lot of them are still hanging on the walls at Andrew’s Upstairs, a bar where all the politicians hang out.”

Master’s degree in hand, Commerford found her way to New Orleans’ French Quarter. She loved “the spirit and culture” of New Orleans and continued to live there for the next seven years. While working at an art gallery and later a hotel, she continued to paint and organized art shows for other artists. Told of good jobs in Atlanta while the city was hosting the 1996 Olympics, Commerford was on the move again. But the good jobs were nowhere to be found and desperate, Commerford took a job at a junkyard.

“It was officially called a ‘recycling center,’ the largest in the Southeast,” she says, laughing. “But it was still really a junkyard. My position was director of personnel. It actually turned out to be one of the best jobs that I ever had. My office was in a building in the middle of the junkyard. It had no windows, so I hung up my art, brought in some plants, and played classical music all day. And it’s also where I met my husband, who was the manager.” 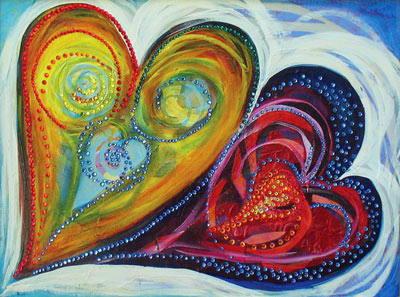 Three children later, Commerford and her husband Richard John, who has adopted the initial tag of R.J., moved to Florida—first to Coral Cables, then just outside Orlando before settling in Leesburg three years ago. Commerford’s art career ignited when she started doing art shows, finally putting her on solid artistic ground.

Commerford now paints from a studio in her home and R.J. serves as her manager. During a typical year, Commerford exhibits her art in 40 shows across the country while also doing private and corporate commission work.

She gratefully notes that R.J. and their children have learned to live with the artistic clutter of canvases, frames, paints, easels, boxes of crystals, and other thrift store treasures. When people visit, they often ask if the Commerfords are packing to move or just moving in. 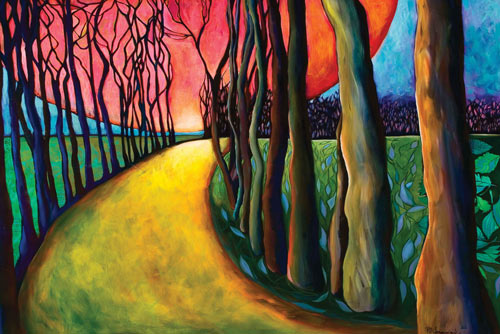 “When I’m not at a show, I paint every day,” says Commerford. “I typically start in the morning, maybe take a short afternoon break, and then start up again. I can paint sometimes until the wee hours of the morning.”

Commerford’s artistic process is as eclectic and multi-faceted as the art itself. She can be working on as many as 10 paintings at once, moving from one to another as the energy flows. One of her favorite places to start a piece in is the bathroom. Cue up the Black Eyed Peas.

“I’ll take a large canvas and soak it in the shower,” Commerford explains. “Then I’ll put a plastic sheet on the floor, put the canvas on that, and walk around it while I throw paint down on it. Then I’ll get down on my hands and knees, and using a windshield ice scraper, I’ll play around with the paint and see what emerges. Then I might leave it alone for awhile and come back later to see what there is to see.”

Once a painting has progressed as Commerford says “to be what it’s going to be,” cue the bling. Usually at this point, she takes over the den and spreads out on the couch and coffee table. She’ll pull out her crystals or other items found while scavenging at thrift stores. Besides the shiny stuff, Commerford will layer in chopped‑up, old embroidered handkerchiefs, vintage silk swatches, and even old photos. Old treasures become new treasures, part of a unique painting that Commerford hopes will bring someone happiness.

“That’s what I try to convey,” says Commerford. “I want my art to bring joy.”