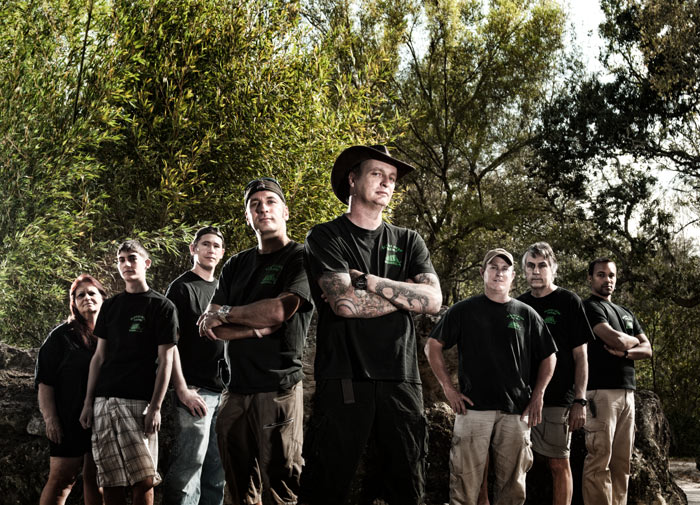 Catching venomous snakes, relocating crocodiles, capturing wild hogs and wading through murky swamp waters in search of an alligator nest might sound like the stuff of nightmares. But for Robbie and Stephen Keszey, the “Swamp Brothers” of Discovery Channel’s reality show of the same name, it’s all in a day’s work.

While Robbie has long made a living with all things reptilian, for little brother Stephen, creatures that slither and creep through the wilderness are indeed enough to spawn terrifying dreams.

The show, which launched in May 2011, quickly generated a healthy fan base for several reasons. Viewers can’t get enough of the heart-pounding wildlife adventures the brothers find themselves in, but beyond that, the personalities of the two men couldn’t be more different. That in itself makes the program worth tuning in to watch.

Robbie, with his laidback, casual demeanor, comes across a bit like a heavily tattooed Indiana Jones. The floppy-brimmed leather hat only adds to his persona. Robbie owns Glades Herp Farm in Bushnell with business partner RobRoy MacInnes. Robbie has indulged his passion for reptiles for many years, turning a lifelong hobby into a business.

“This job means I never really had to ‘grow up,’ because I get to play with animals every day,” he says.

Stephen, on the other hand, with his backward ball cap and sunglasses, feels far more at home with skyscrapers overhead and concrete under his feet.

“I admit it—I’m kind of high strung, and I’m a neurotic person. I don’t see anything wrong with that. I consider it a compliment to be called ‘neurotic,’” says Stephen without a trace of irony.

He may have a New York personality, having lived there for 15 years, but he’s called the swamp home for several years now. 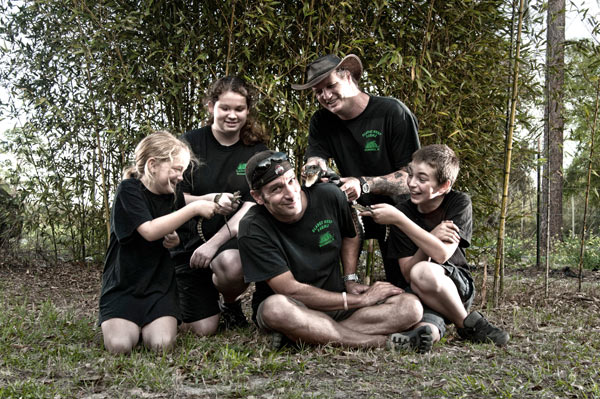 Growing up in Ohio, the Keszey boys had the typical pet dog, but Robbie’s tastes ran more toward the exotic. “I had all kinds of animals and got my first snake when I was 8,” he recalls. Stephen remembers those early days and his sibling’s slithering pets, particularly the snake that bit him when he was just 7 years old. “I have that burned into my memory. I didn’t touch any of his animals after that. I was busy riding MX bikes; I figured I’d rather get hurt in the dirt than bit!”

The brothers ventured off in different directions as adults. Robbie spent seven years as a personal assistant for the ‘80s rock band Poison, but the fast-paced life of Los Angeles never felt like the right fit. Eventually, Robbie left California for Miami, and when he and wife Michelle had the chance to purchase Glade Herp Farm, they took it. Stephen, meanwhile, was happily making a living as a bartender on Manhattan’s Upper West Side.

After their father passed away in 1997, the boys’ mother relocated to Florida.

“When I used to come down from New York to visit Mom, it was fun being out in the middle of nowhere,” says Stephen. “It was fun to look at all the animals in their pens and then go back to civilization to the greatest city in the world.”

But when their mother needed round-the-clock care in 2009, Stephen made the decision to leave New York and move down to Florida to help.

“She needed someone to live with her to keep her from having to go into a nursing home. We had great parents, so this wasn’t even a sacrifice,” says Stephen.

“Even when our Mom was dying of bone marrow cancer, the one thing she enjoyed was that Stephen and I were together on the farm,” says Robbie. “The day before she died in 2010, she asked me to promise we’d stay together here.”

Over 400 alligators and some 60 crocodiles can be found at Glades Herp Farm, which is also a sanctuary for lizards and over 100 species of snakes, ranging from garter snakes to cobras and even the inland taipan, the world’s deadliest snake. The Keszeys have also taken in unwanted reptiles and encourage people to contact them rather than release their unwanted animals into the wild.

Known as “the largest venomous snake farm in the world,” the business revolves around selling snakes to permitted collectors and zoos, as well as venom laboratories, where the snakes are “milked” to collect venom for pharmaceutical research. Venom can be used as a pain reliever and is being used in research for treating strokes, heart attacks, cancer and arthritis.

It wasn’t until Robbie asked Stephen for a little hands-on assistance that the idea for a television show was born. Robbie was filming a special on king cobras when the scheduled two-day shoot extended to three days. It was a Sunday, and all the regular farm employees were off, so he talked his little brother into helping.

“The producer filming that segment thought our interaction was hilarious,” says Robbie. “He was laughing his butt off the whole time and said we should have our own show. The next thing we knew we had several production companies calling us that were interested in doing something. They liked the concept of ‘city boy and country boy’ and got Discovery Channel on the hook.” 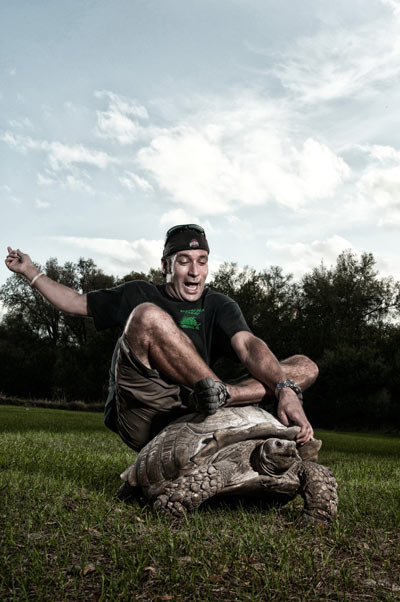 Filming for last season’s 34 episodes wrapped up in November, and new shows will begin filming this spring. The brothers come up with topics that might work for a show, and the producers then decide what to film. As is apparent when watching the show, there’s a loose outline of what is supposed to happen but no script. When dealing with wild animals, there’s no way to predict just what will happen.

One thing you can count on is Stephen’s “yikes-get-me-out-of-here” reaction to many of the scenarios. The constant bickering and bantering between the brothers sets the framework for each episode, whether they’re moving a dangerous crocodile or sexing alligators (if you have to ask, don’t!).

Each episode beginswith the disclaimer that these are professional animal wranglers and these activities should not be tried at home. (Yea, right.) While Robbie has obviously earned the title of “professional wrangler,” Stephen hedges a bit and says he’s probably more of a “novice animal wrangler.”

“Every animal on this farm scares the $%&# out of me,” admits Stephen, whose anxiety-laden comments result in “bleep outs” in scene after scene. “Robbie wants to get up close and personal with gators. I’m like a normal sane person and want to run. There are still things that scare me, like the Cuban crocodile, for instance. Alligators are puppy dogs compared to crocs. I feel confident catching a four-foot alligator by myself now, but crocs are a lot stronger and more aggressive; they’re like alligators on steroids!”

“He’s improving at some things, but at others, he’s still a baby. I’ve always looked out for my brother my whole life. I’m not going to let him get hurt,” says Robbie.“When I have to do something and need his help, Stephen makes it his mission to disappear. I’ve found the best thing is not to tell him exactly what we’re going to be doing next.”

“Sometimes, Robbie will say I’m ready for something, and a lot of times, I don’t think I’m ready yet,” says Stephen. “But it’s much better than sitting in an office all day. It really gets the adrenaline flowing, and I’m very spry and ready to get out of the way.”

Robbie takes charge of their many adventures, for example, announcing in one episode that they have to go find a gator nest so they can gather the eggs to incubate them before raccoons, fire ants or anything else can destroy them. While Robbie takes the lead, often encouraging his brother to tackle a chore that seems daunting, if not downright dangerous, Stephen’s expressions and responses make the scenes memorable.

Take, for instance, the episode where the brothers must bag up a 20-foot-long reticulated python that has been purchased by a zoo. By the end of the show, despite his earlier apprehension at handling the monster-sized reptile, Stephen grins, “I think I’m becoming a ‘snake whisperer’. Just because I’ve done it a few times doesn’t mean I’ve lost my fear or am great at it. I’m just better at it.”

Robbie loves the opportunity to educate viewers and often dispenses with interesting tidbits and facts throughout each episode.

“My whole agenda is to get people excited about wildlife and enjoying it,” he says. “A lot of kids don’t even get out of the house anymore. They’re so busy playing Wii and Nintendo. There’s a lot of humor in the show, but kids also learn a lot. It’s really an educational show with a reality twist, and we give a lot of fun facts.”

Robbie and Stephen don’t see the episodes before they air, so they’re almost as surprised as the viewing public when they watch the final shows.

“I like it that way,” says Robbie, who has been married for 15 years and is the father of Kassandra, 13,Zoltan, 11, and Piper, 8. “I sit down and watch it with my wife and kids; they love the show. Kassandra wants to be a marine biologist. All the kids love animals, but we’ve never pushed them on it.”

Stephen, who just married last November, tunes in to watch with wife Sally, a pediatrician in Orlando, and step-daughter, Sophia, 6.

Their celebrity status has done little to change the brothers; although, they admit it’s “cool” to be recognized because of their television appearances. That recognition has even come in handy. On a recent trip to California, Robbie was getting ready to go through airport security and realized his license was missing.

“The TSA agent at the gate in Palm Springs recognized me from the show. I love dealing with people, so that’s the fun part of it. We take pictures with people and sign autographs all the time.”

No matter how long Swamp Brothers lasts, the best part of the gig, in Robbie’s opinion, is the chance to enlighten viewers.

“We want to educate people so if they get a pet reptile, they know how to take care of it properly. We hate to hear about pets being released into the wild and want to teach responsibility,” he says with genuine enthusiasm. “That’s my passion, my whole life, and when we got the show signed, that was my hope.”

And if Stephen’s wide-eyed reactions and clever quips help hammer home those lessons, so much the better.

Glades Herp Farm in Bushnell is open to the public and school groups for tours Tuesday-Saturday.