Local mariners have years of experience on the water. 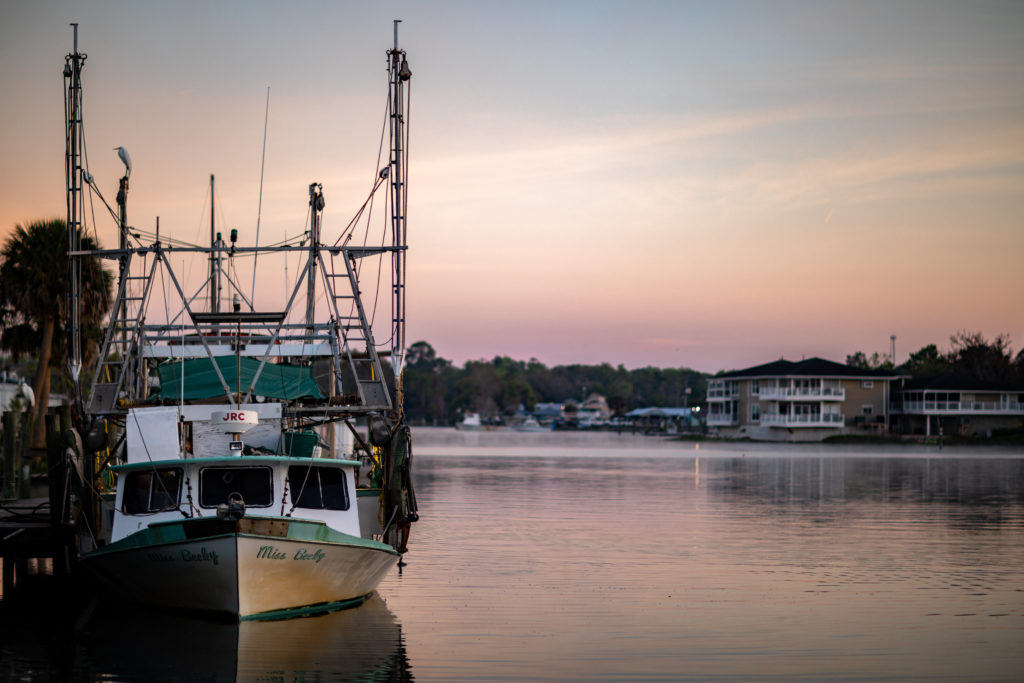 For many of us who grew up watching Gilligan’s Island, the affable Skipper, aka Captain Jonas Grumby, was our first introduction to a professional boat captain.

Of course, a good captain who was paying attention would never have run aground on a deserted island… but then, we wouldn’t have had a show, would we?

We visited with three locally based captains who shared their stories on Florida’s waterways—and beyond.

Raised in Brooksville, Captain Stacy Horak lived in the Ocala National Forest for many years, regularly accompanying her then husband on boat outings.

“I was never really an angler, more of a ‘bow ornament,’” laughs Horak. “We had no education about tides, bait or anything. The only thing we checked was the weather!”

Within a week of her daughter’s proclamation, Horak bought her own boat. She taught herself how to handle it, learned how to fish, obtained her license and eventually started her own business, Charter Fishing with Captain Stacy, in January 2017.

“The last four years have completely changed my life,” says Horak, 47, who was previously a stay-at-home mom. Horak took a practical approach to learning. 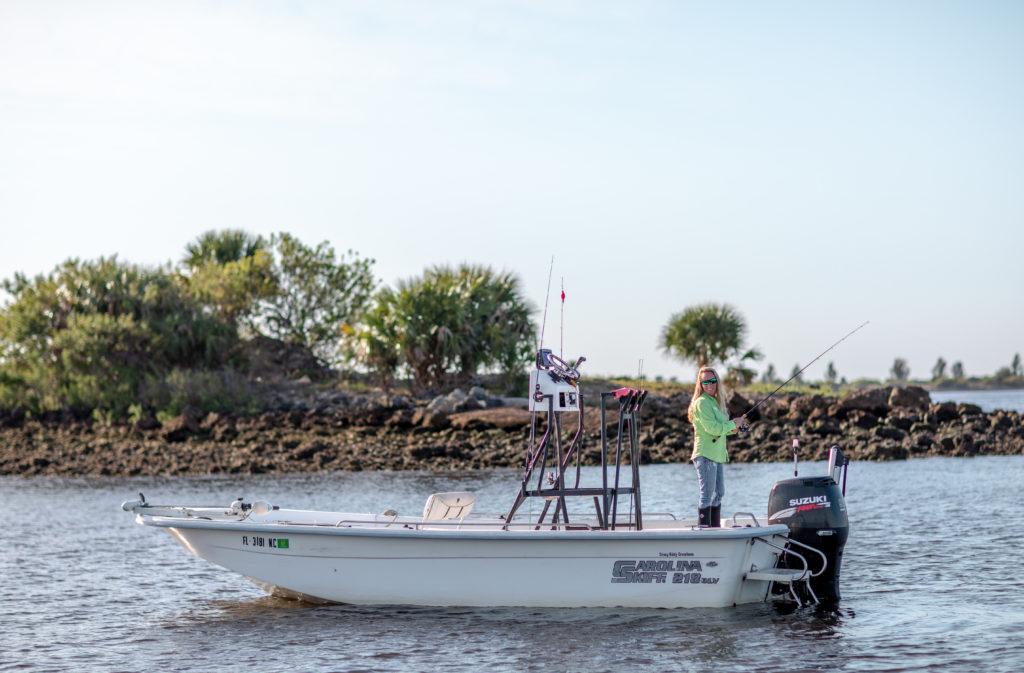 “I hung out at bait stores and listened to all the men talking about what they caught, what (bait and tackle) they used and the conditions they were fishing in. I bought whatever products the bait store was low on, because I thought if everyone’s buying this, it must work,” she relates. “My daughter and I went to the boat ramp at midnight to practice backing in when people wouldn’t be around.” Horak’s confidence and knowledge have earned her the respect of her male peers in the Crystal River area.

“I’m one of the only female captains based here,” she says, adding that male captains were reluctant at first but saw her put forth the effort and now are very supportive. An inshore fishing guide, Horak takes up to four people at a time on her 21-foot Carolina Skiff with a 90hp four stroke Suzuki. She provides everything from bait and tackle to sunblock and life jackets; guests just bring their own food and drink. “We explore the backwaters of Crystal River, Homosassa and Yankeetown, targeting redfish, trout, snook, sheepshead, etc. Most of the waters are quite shallow, and you can see the fish,” notes Horak, who also does scallop charters in the summer. Horak holds fishing clinics and seminars for Bass Pro Shops, eager to see more women involved in the industry she now loves. In February she was part of a panel of captains who spoke at the Saltwater Sportsman Seminar Series in Tampa.

She writes a monthly column for Coastal Angler magazine, and does a fishing report for the regional television show Florida Insider Fishing Report.

Three years ago Horak started the Annual Ladies Redfish Classic tournament, and entries have doubled each year. This year’s event will take place May 18, and women will be fishing for redfish, trout, snook and (appropriately) ladyfish. The Coastal Conservation Association (CCA) has partnered with her this year, so the tournament will feature even more prizes. All proceeds benefit the Academy of Environmental Science’s youth summer camp program.

“When I started, my goal was to show her women can do this,” recalls Horak, adding that her now 15-year-old daughter has taken a huge interest in coastal conservation. “There’s no other life for me now. My daughter will probably be a charter captain herself. I take her with me often; she’s the best skipper I could have.”

Florida native Captain Worth Brown has boating in his blood. Named after his grandfather, an avid sailboat captain and boat racer, Brown grew up in his family’s boatyard in Miami and Palmetto, Florida, Snead Island. Every job he’s had has been on the water.

Brown first got his captain’s license in 1984; he worked as a test driver for Chris-Craft Boats for five years and has worked as a yacht captain for companies, such as NASCAR, and private owners, including late Georgia state senator Glenn E. Bryant. For the past 12 years, he’s captained a family’s fleet of private yachts, a job that has him operating between the Bahamas, Ocean Reef in Key Largo, up the Eastern Seaboard, through New England, Nova Scotia and into each of the Great Lakes.

With his current licensing, Brown can captain a U.S.-flagged vessel of 200 tons and a foreign-flagged vessel of 500 tons. Through the years, he’s taken commercial classes and additional levels of training to be certified to handle the increased requirements of captaining large, modern vessels.

“I love being at sea and on the water,” he observes. “The job pays well, but the drawback is that it’s kept me away from my family. Some years I’ve been gone up to six months at a time.”

Brown has a crew to help with certain chores but is responsible for a great deal besides piloting the boat. Among his duties are boat maintenance, trip planning and scheduling, arranging transportation for guests and provisioning the boat (stocking supplies and food).

Brown captains a Westport Pacific Mariner, a $7 million, 86-foot yacht. With the vessel’s electronics (radar, sonar, etc.) and technology, it’s more like operating an aircraft than driving a vehicle.

For example, he uses a weather software program that allows him to see his boat’s position and any storms heading his way.

“It even shows wave heights and lightning and allows you to do advanced plotting based on sea conditions,” Brown explains. “Back in the early 1990s, we’d have to call a weather service and pay for this kind of information.”

Experience and meticulous attention to detail can be the difference between a good trip and catastrophe. When navigating through shipping traffic there can be as many as 300 ships within a 1,000-nautical mile radius.

“There are vessels everywhere, so you really have to be on your toes. You have to use every means possible to keep your boat, passengers and crew safe. With all the technology we have today, you can really avoid the bad stuff. That’s what a good captain does,” says Brown.

“The biggest thing that gets people in trouble is operator error,” he adds. “When people disappear and boats sink, most of the time it’s operator error.”

Brown has encountered many memorable moments on the open waters, from submarines surfacing to impressive sea life, including one enormous great white feasting near a commercial tuna boat fleet off New York’s Hudson Canyon.

“In the spring whales are a big (literally!) issue going north from Florida. You don’t want to hit one and hurt it. Off the Georgia coast in order to protect right whales, you can’t exceed 10 knots unless you’re 20 miles offshore,” notes Brown. “I saw one whale breech and dive; its tail was almost as wide as our boat, which is 22 feet wide.”

Brown has seen humpbacks on multiple occasions off the New Jersey coast and once saw five species of whales at the same time on the St. Lawrence Seaway in Canada.

“There’s so much krill for them to eat; it’s the largest concentration in the world,” he says.

Nearly 30 years ago, Captain Rick Muldrow took his lifelong passion for boating and fishing and turned it into a business. Fellow anglers know him as “The Fishing Fool,” and he loves sharing his knowledge of Florida waterways, making him one of the popular presenters at the Annual Boat Show & Fishing Clinic at Miller’s Boating in Ocala every February. Born and raised in Ocala, Muldrow, 62, has been fishing the central Gulf waters, inlets and rivers since childhood.

“My dad got both my brothers and me started fishing,” he recalls. “I bought my first boat—a small jon boat—when I was 16. On my days off and after school, I’d take it out and learn the waters.” 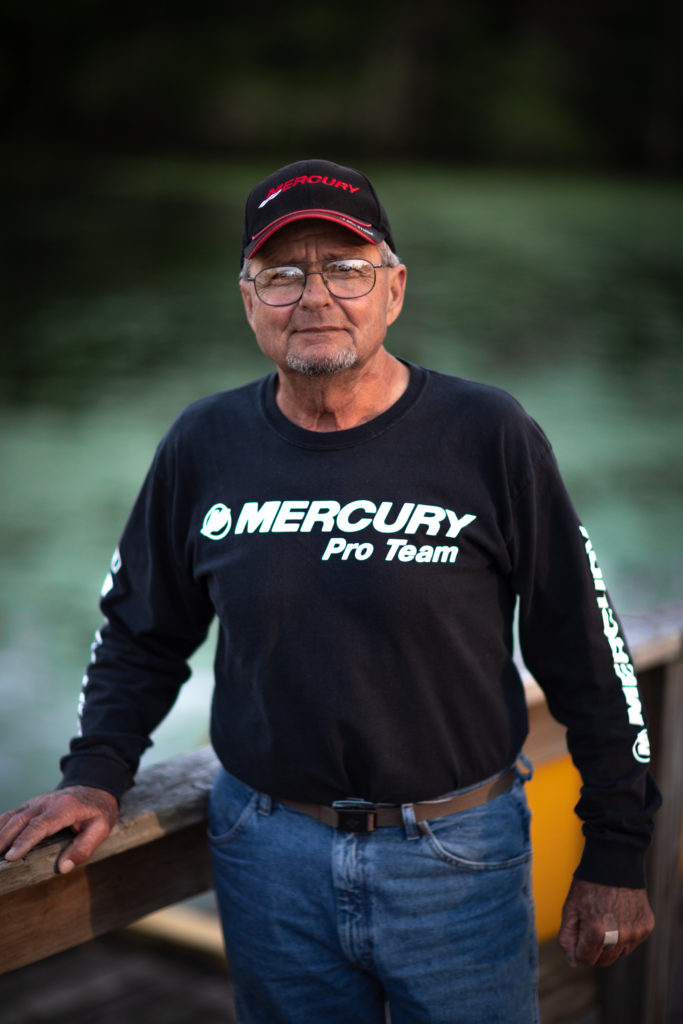 “We go out the Withlacoochee River, which is still one of the most untouched rivers we have. It’s old Florida,” says Muldrow. “The beauty of inshore saltwater fishing is that we can be fishing within 30 minutes of leaving the dock. The shorelines, oyster bars and grass flats are so beautiful. We’re rarely more than one or two miles offshore.” Depending on the time of year, he’ll see a huge variety of birds, manatees, large sea turtles, tarpon and manta rays. Porpoises are often in the area and are always entertaining.

“They’ll follow the boat,” says Muldrow, who tells his guests, ‘This ain’t Sea World—it’s the real deal out here!’” On the half- and full-day charters, Muldrow provides everything from bait to poles; he even cleans the fish—unless a guest insists on doing so! Because of Muldrow’s USCG six-pack license, guests on his boat aren’t legally required to get individual fishing licenses.

Every five years Muldrow has to renew his license, complete the required paperwork and pass another physical. Safety is paramount.

“I think of it like being on a highway,” says Muldrow, adding that many people go on the water to drink and party. “My personal opinion is that anyone who operates a boat should have to take a boating safety class, but Florida law doesn’t require that, so you have to watch out for other boaters.”

Everything about his business is based around the weather.

“I won’t take people out if the weather isn’t right. People get in trouble when they don’t pay attention to weather,” says Muldrow. “With our technology today, there’s no excuse to get caught in bad weather.”