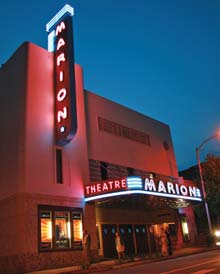 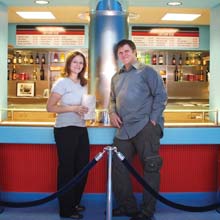 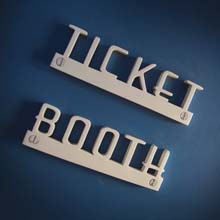 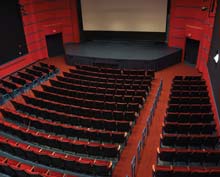 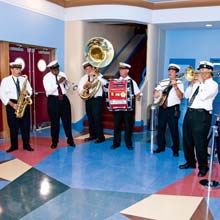 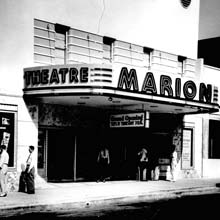 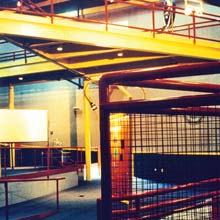 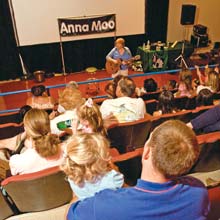 Built in 1940 by E.J. Sparks, the Marion Theatre in downtown Ocala was once the area’s premiere movie house. A shining example of streamlined modern art deco style, the theater opened to the public on Sept. 11, 1941, and featured the most high-tech sound equipment of the time. Aloma of the South Seas was the first picture to grace the big screen at the theater. The cost? Certainly not the almost $10 of today. In its opening year, matinees were just 33 cents and evening showings were 39 cents.

Attendance at the Marion Theatre remained strong throughout World War II until the facility closed its doors in the mid-seventies. The theater was re-opened in 1990 as the Discovery Science Center, but the center relocated to a larger location in 2001. The building remained vacant ever since—until now.

Brian and Tava Sofsky are no strangers to the world of filmmaking. The Ocala couple met in 1996 in Los Angeles while both were working on the set of the movie The Mask of Zorro. Married in 1998, the pair moved to Florida in 2003 and eventually made their way to Ocala, Brian’s childhood hometown. A special appreciation for old theaters and quality family programming brought the couple to the doors of the vacant Marion Theatre.

“Brian was walking downtown one afternoon and noticed a sign on the doors to vote on the usage of the building,” Tava says. “Brian and I had a dream to eventually be able to host family festivals, and Brian knew the theater would be perfect.”

The city of Ocala agreed. In December 2003, the city entered a long-term lease with the Sofsky’s company, the Marion Film & Visual Arts Foundation, Inc., to restore the Marion Theatre to its original intended purpose, a movie house and community theater. Tava and Brian have been hard at work ever since.

After nearly four years, the couple’s dream became a reality with the grand re-opening of the Marion Theatre on August 11.

“We were very pleased with the turnout,” Tava says. “It was awesome to see all the smiling, happy faces. The Marion Theatre is a wonderful, state-of-the-art community theater that’s just bursting for people to come out and experience it.”

The restoration and revitalization project was no easy task, though, especially for a couple with two children under the age of three.

“We began by raising money and applying for grants,” Tava recalls. “Fundraising wasn’t coming too quickly, so Lee Farkas [chairman of mortgage lending firm Taylor, Bean & Whitaker] basically fronted us the $1.3 million necessary to open the theater. Donations are needed more than ever now to repay him for his generosity. It’s because of Lee that we’re able to provide the city with quality family programming.”

In February 2006, the MFVAF sent out a nationwide request for proposals to find a suitable contractor for the restoration project. Seven months later, Ocala’s own Genesis Construction was chosen for the project out of more than 600 bids. The massive demolition project began just one month later.

In an effort to restore the theater to its former glory, the Sofskys took special care to choose materials that were as close as possible to what first existed in the theater.

“Marc Mondell from the city became our construction administrator,” Brian says. “He did an amazing job relaying our vision back to the contractors. There are no color images of the theater from when it was first built. We relied on people’s memories and descriptive text from the Ocala [Evening] Star [a precursor to the current Star Banner] to guide us when choosing materials. The three colors that were mentioned were rosewood, red, and blue.”

As guests enter the theater, the feeling of being underwater will undoubtedly wash over them. Their eyes will certainly be drawn to the bright blue walls, a stark contrast to the white pillars and moldings. Neon lights on the ceiling emulate waves. The Marion Theatre exudes serenity and happiness.

“The lobby was expanded and can be used to host a cocktail hour before an event,” Tava says. “The kitchen was also completely renovated and we will offer a variety of refreshments, including beer and wine.”

To maintain the building’s streamlined art deco flair, Brian and Tava researched cruise ships and visited more than 100 other theaters across the country.

“If you look at other art deco buildings, they feature vivid colors and strong architecture,” Tava explains. “That’s what we wanted for the Marion Theatre and I think we achieved it.”

While Brian and Tava wanted to stay true to the historical structure and decor of the building, the opposite is true of the extensive audio/video system.

“It was very important for us to be on the forefront of technology,” Brian says. “The Marion Theatre is completely digital and is capable of featuring pure high definition screenings.”

Brian is also quick to point out that the theater is also “an exceptional audio hall,” whether guests are experiencing a live musical performance or a recorded CD.

“Our digital audio system is capable of producing everything from THX to DTS to Dolby 7.1 Surround Sound,” Brian says. “Whether you’re sitting dead center in the theater or all the way in the back corner, you’ll hear pure digital audio.”

To further enhance their guest’s theater experience, care was taken when choosing just the right seating for the venue.

Seats are staggered to eliminate straight lines and are placed on a gradual 20 percent incline.

“Sight lines are very open in the theater,” Brian says. “There’s isn’t a bad seat in the house.”

Once a part of the main theater, the Sofkys have converted the balcony area into a separate facility, allowing two events to be hosted simultaneously. A second-story exit was added to guarantee privacy. The downstairs theater holds 327 seats, while the upstairs facility is more intimate with just over 100 seats. Of course the reason behind this million dollar restoration and upgrade was so that Tava and Brian could bring quality, high-end family programming to the community they call home.

They’re achieving this goal with the help of their programming director, Naseem Shah.

“Tava and Brian are big dreamers who don’t settle for mediocre,” Naseem says. “I was eager to work with them and get involved in the theater.”

Hard at work since well before the theater’s grand opening, Naseem has already lined up several impressive and nationally known musical acts. Chief among those is Alpin Hong, a Julliard-trained pianist who brings a youthful approach to classical music. Also scheduled to perform is So Percussion, described as four guys who play percussion on everything but drums. Duelling Divas, scheduled to perform October 6, features the talents of Ocalan Birgit Fioravante.

“My friend and co-diva Wendy Reynolds and I had an idea to add comedy into our regular concert performance,” Birgit says. “We got such a great response that we really started to build it up with costumes, characters, and skits. It really is a fun show filled with familiar songs with a twist.”

Also on the docket is Montana Skies, an award-winning guitar/cello duo that Naseem says offers a very “world music” feel to their performances.

Naseem’s task is to organize and schedule a variety of programming events including film showings, musical and dance acts, and a variety of children’s programs including puppet shows and book readings.

“The children’s shows will be geared toward being both fun and educational,” Naseem says. “We’ll have a variety of live acts—everything you could think of from acrobats to comedians. There will be something for everyone at the Marion Theatre.”

The Sofskys feel very strongly about this project since it’s a result of years of hard work and dedication. But not just on their part—countless volunteers helped the Sofskys realize their dream.

“I’m astounded at how our volunteers have come together to get this job done,” Tava says. “It’s very motivating and very humbling. Brian and I see the theater as an amazing opportunity for the community.”

THROUGH THE YEARS:
The evolution of the Marion Theatre

Doors opened to the public for the first time on September 11, 1941, at 7pm at the air-conditioned Marion Theatre. “The Marion” served as Ocala’s premier movie house for over 30 years. This photo was taken on or around the theater’s original grand opening.

The Discovery Science & Outdoor Center took over the Marion Theatre building and was in operation in operation from 1991-2001. The center currently resides on SE 22nd Road and offers a variety of hands-on, science-related exhibits for children.

The Marion Theatre celebrated its official grand re-opening on August 11. During the day, a performance by children’s performer Anna Moo, musical selections by the Storyville Stompers (a brass band out of New Orleans), and a theatrical showing of Academy Award-winning short films took place simultaneously. Throughout the course of the day, more than 1,100 people visited the theater.