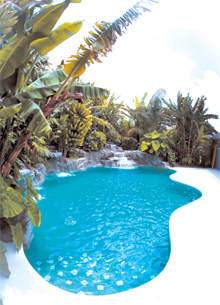 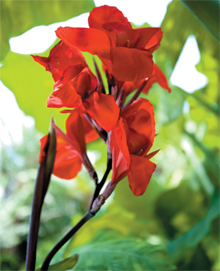 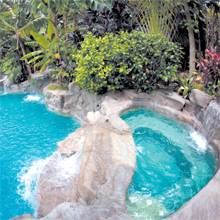 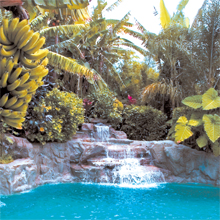 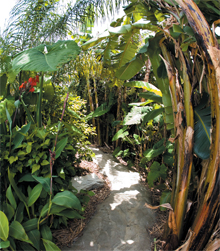 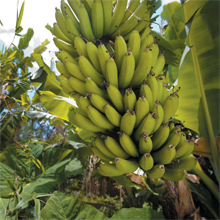 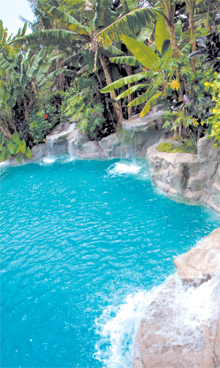 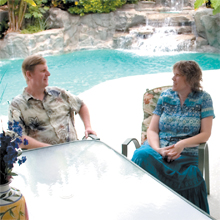 The family pool at the Leaberry home holds 40,000 gallons of water, has four large waterfalls and eight small ones. It is lighted with state-of-the-art fiber optics, is eight-feet deep so you can dive easily, and has been the subject of a national television show.

“Look What I Did” is something Kirk can proudly say, but it’s also the name of a popular show on the Home and Garden Television cable channel that features people who have tackled and conquered big home improvement projects themselves.

After hearing what the intrepid home contractor had done with his own hands, producers of “Look What I Did” showed up at Kirk’s home and worked steadily for eight hours to glean little more than six minutes of videotape for the HGTV program that aired in May.

“They brought in all kinds of equipment, even an underwater camera,” Kirk says. “They were here all day, and we worked hard. It was interesting, but if that’s what it’s like to be a movie star, one day was enough for me.”

The finished product was a beautiful look at a project that took more than a year to complete between Kirk’s other projects, like building custom homes in Orlando. Still, Kirk is a true visionary, and he was eventually able to finish his masterpiece.

Kirk and his wife, Lisa, enjoy the pool with their children and grandchildren and friends when there’s an occasion to throw a party.

“I’ve always wanted to do something with a waterfall, and after we went to the Caribbean, I knew what kind of look I wanted,” Kirk explains.

The Leaberrys celebrated their 15th wedding anniversary with a cruise to the Caribbean, thoroughly enjoying the beauty of the sun and water.

“We just fell in love with it, so I made all the colors and plants to look like a ‘resort pool’ or a tropical paradise,” Kirk says.

Lisa laughed when asked how Kirk had time to tackle such a massive project.

“You know, most men like to watch football and other sports. He doesn’t. He loves to do things around the house,” Lisa says with a smile. “We don’t really watch TV. We don’t even have cable. If you think about all the time the average person spends watching television during a year, you’ll know about how much time he spent working on it.”

Kirk, however, didn’t want to put an estimate of time spent on his “labor of love.”

“I always thought it took the fun out of it to keep up with the hours,” he says. “It’s just fun whatever I’m doing.”

Planning was as crucial. And just as time consuming. Though Kirk said he could see the finished job in his mind, he knew things had to be precision designed to get the finished product to work as it should.

“It took me 39 hours of drawing to design where all the plumbing would be,” Kirk says. “This pool has all the latest safety features, like these anti-snare drains in the bottom of the pool.”

“He planned for a year before he shoveled any dirt. The planning time is crucial for projects like this,” Lisa adds. “He builds things in his sleep. When he has a problem he’s working on, he’ll wake up at night and say, ‘I’ve got it!’ His secret is he can see the finished product.”

One of the puzzles that gave Kirk a lot of problems was how to lay his pipe without it showing and ruining the scenery around the pool.

“I came up with the idea of stuffing sandwich bags in the pipe to keep the mortar from getting inside and after it had set up for two hours, I pulled the sandwich bag out, and I had a perfect opening without the pipe showing,” he says proudly.

Kirk’s attention to detail has made the pool and the area surrounding it a peaceful, beautiful place for his family to enjoy. Although the pool is operated with five pumps, they are all placed throughout the foliage so that they’re never seen or heard. While the flowers and plants are thick enough to create a wall, the warmth of the pool’s water creates a tropical atmosphere so that they are lush and green, and blooming from June until November.

Since the pool isn’t in a screened enclosure, Kirk uses “mosquito vacuums” to keep the area clear of the pesky invaders.

The Leaberrys didn’t just accommodate the pool in the backyard; they installed doors on the patio that go back completely out of sight. As guests enter the front door, it looks as though the pool is a part of the house and creates a tropical air for parties and family dinners.

Kirk and Lisa enjoyed a laugh as they recalled Kirk’s first adventure with a water project for their home.

“We were living in Bellingham, Wash., when he decided to build a deluxe shower,” Lisa remembers. “It had his and her sides, and he added lights and music. He also put in a steam nozzle and aromatherapy.”

“I had to get a special permit from the building code department because it needed extra water heaters,” Kirk adds. “I used Roman tiles and I made acrylic chairs you could see through and remove.”

Since the Leaberrys are so fond of water — they admit it’s their one vice — Kirk is careful with it and designed his pool to use it in an effective and inventive way.

“All the water recycles, so it’s not a water waster. The pool automatically adjusts itself after rain or if there’s a drought,” Kirk says. “I wanted it to be convenient and as easy to care for as you’ll ever get.”

After finishing the pool, Kirk took on another project he had no experience with — creating effective landscaping around the pool. Though he and Lisa read books on the proper plants and trees for homes in Florida, they weren’t familiar enough with the names of the plants suggested.

Instead, they took off to the local home and garden center and picked up whatever was on sale.

“There was no planning whatsoever. We’d just go down and see what was on sale and plant it. We decided we’d go to the place where the plants were, buy the plants that were available and make them work,” Lisa says with a laugh.

“Most of the plants out here are from the supermarket. The papaya and mango trees came from fruit we’d bought at the grocery store. The avocado tree grew in about six months,” Kirk explains. “The landscaping is watered by a low-pressure drip system. That way you don’t use much water, but when the plants do get water it is right down on the ground at the root system. The plants like it that way better.”

The finished project looked great, and the Leaberrys were excited their efforts were going to be shown on TV. They just didn’t know when.

“They never told us when it was going to be aired. They just told us to watch for it,” Kirk says. “I saw in February it was coming out in March. It finally aired in May.”

The next addition to the pool was to be solar heating, but a broken wrist kept Kirk from starting on it last fall. He’s planning to do it this year. And it looks like the sky’s the limit for the Leaberry pool because it seems there’s nowhere else to go.

“We’ll go along sometimes, and I’ll think of something different or better, and I’ll add that,” Kirk says.  “I guess that’s why they call it art, because it can change while you’re doing it.”

What’s In The Leaberrys’ Tropical Paradise?

HGTV’s Look What I Did airs on Wednesdays and Fridays at 6pm. Episodes feature homeowners who break the design mold by creating their own home improvement projects by themselves.