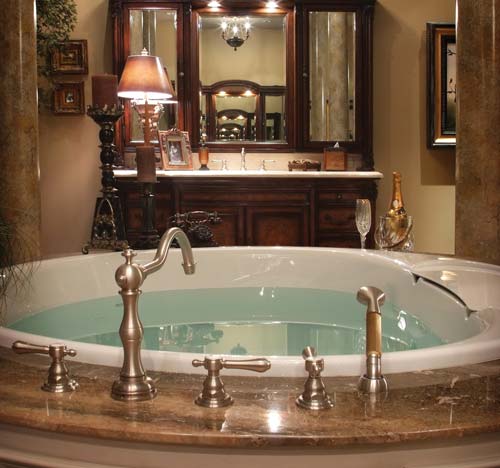 RETREAT IN STYLE  in the Palmires’ luxurious marble tub. 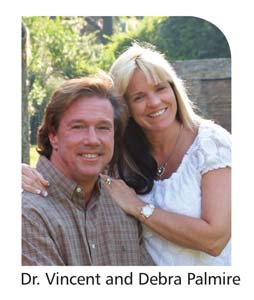 CAESAR WOULD BE IMPRESSED. A passion for European architecture and unsurpassed style led Dr. Vincent and Debra Palmire to design a master bath suite reminiscent of one that might have been found in ancient Rome.

Heavy double doors lead from the beautifully appointed master suite into the expansive bath. Upon entering, a circular, 6-foot Whirlpool tub demands attention. The ultimate in luxury and sophistication, the elevated tub, complete with a relaxing waterfall feature, is surrounded by massive fiberglass columns, topped with decorative Temple of the Wind caps. The columns, hand-painted by local artist Sheryl Wallesverd, perfectly mimic the intricate pattern of the marble tub and floor.

One of the many highlights of the space is the dome ceiling—hand-painted by Art Effects of Orlando—that arches high over the tub. 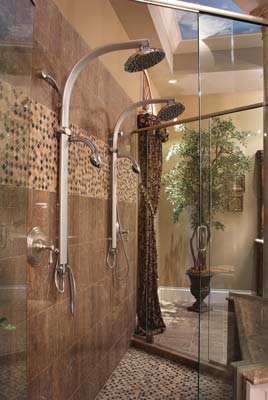 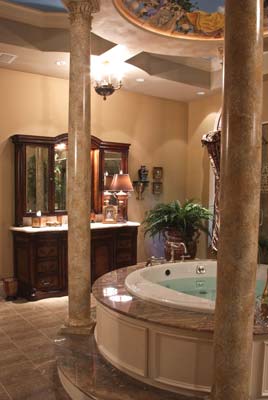 Vincent Palmire notes that this type of Greco Roman architecture in bathing areas is a common feature in paintings from the 17th century.

“Many expensive homes in Italy, the Netherlands, Britain, France, and other countries in Europe featured marble-columned and dome-covered tubs and showers,” he says. “It is, for me, the ultimate in elegant, distinguished, belletristic architecture for the bathroom setting. And what could be more distinguished, more harmonious, than a fresco-styled painting on the dome and ceiling, with a typical outdoor feel and a balustrade populated by cherubs and accoutrements?”

Attention to detail and history have made the Palmires’ bathroom addition a soothing and serene oasis. 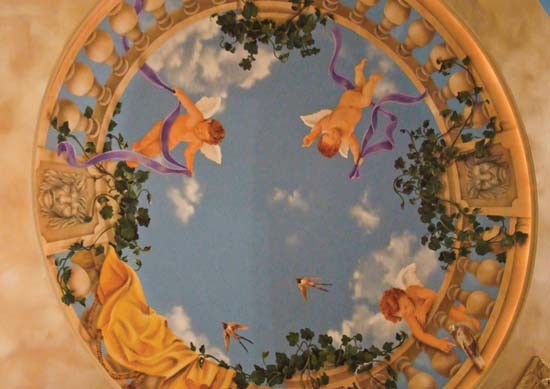 “Vince is very eclectic,” says contractor Geoff Abbott. “I can’t put an individual tag on his style. I just think elegance when I look at this space.”

Exactly the response the Palmires had in mind.

Situated just behind the tub and nestled between two large transom windows, each anchored by heavy draperies in subdued shades of brown and gold, is the frameless glass shower. Measuring a comfortable 8 feet by 4 feet, the shower features a large sitting bench, and dual handheld and rain shower heads, perfect for a lazy weekend morning.

His-and-hers Horchow vanities that were handcrafted out of mahogany wood feature ample storage and have undermount sinks to maintain clean lines, and smooth marble countertops.

No detail was overlooked when adding the finishing touches to the space, either. Trim work, including specially-made 7-1/4-inch crown molding and baseboards, took three weeks to complete. And the added effort was well worth it. As with any great masterpiece, it’s the small details—or brushstrokes as this case may be—that when put together, create a visually stunning result.