The lovely horticultural streetscapes around downtown Ocala are created by a talented team of city employees. 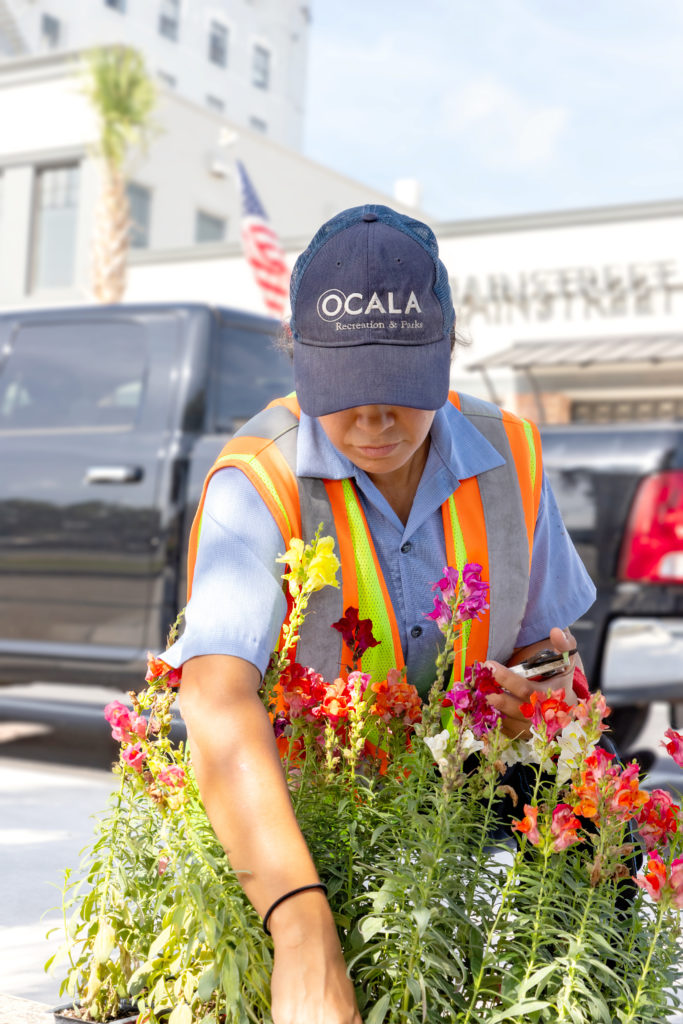 Visit downtown Ocala any time of the year and you are sure to see lush landscaping, beautifully curated planters along many sidewalks and on street corner crossings, and hanging baskets dripping with colorful blossoms.

These streetscapes are all examples of the work done by a special team within the City of Ocala’s Recreation and Parks Department. And if you venture to one of the city’s many parks, such as the nearby Tuscawilla Park, you’ll see more outstanding examples of the horticultural beauty they help create.

“The Downtown Beautification Crew is an essential part to what we do in Recreation and Parks,” says Parks Division Head Bill Rodriguez. “They help us make Ocala a great place to live, play and prosper. They maintain, install and design most of our landscape downtown, but they also maintain the landscaping on 40-plus city park properties, which enhances the user’s park experience and coexists well with the native flora of our parks.” 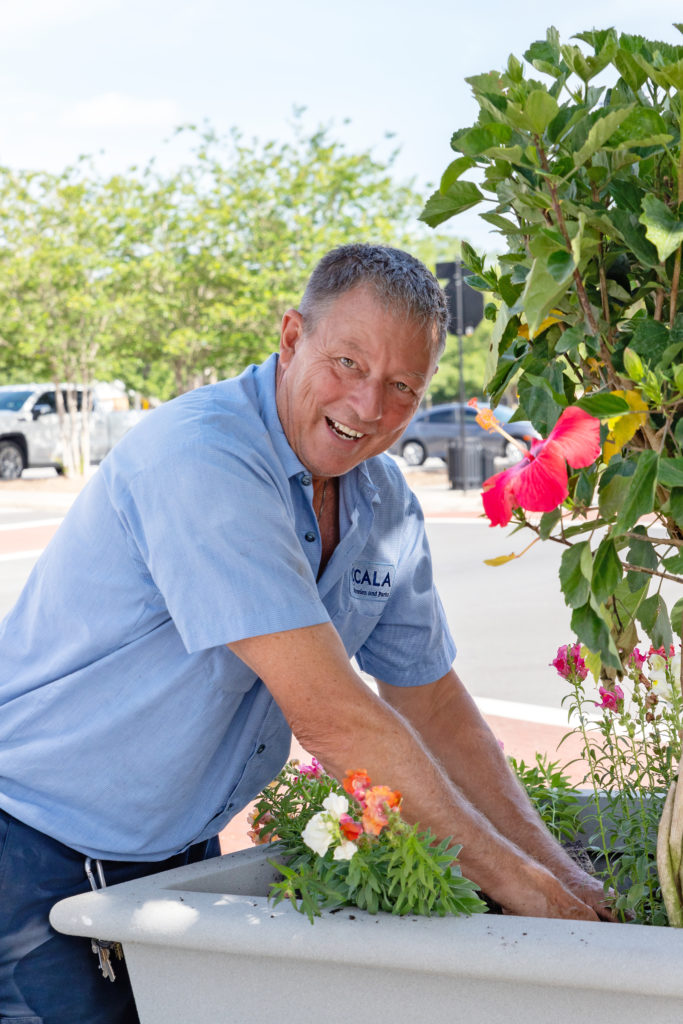 Among the most striking examples of the team’s efforts are the giant concrete planters all around the downtown square and being added along the Magnolia Avenue and First Avenue corridor. The colorful containers might showcase feathery ferns, a miniature palm and flowing cascades of petunias, ice plants or Blue Daze, along with a mixture of snapdragons, zinnias, dusty miller, salvia, marigold and dianthus.

The lovely creations begin in the mind of the team’s supervisor, Greg Vandeventer, who worked at a nursery when he was in high school and in his father’s landscaping company. He later was a recreation supervisor for Marion County for 11 years and director of operations for an alternative school for 14.

“I loved being outside, doing landscaping,” he shares. “When the opportunity to get back into horticulture opened up, it was coming back to what I like to do. It gets me out in the environment and I like being able to create something everybody can enjoy.”

Some of the designs spring from the aesthetics of the area in which the planter is placed.

“In some areas, we want plants that are going to cascade out of the pot and flow out,” Vandeventer explains. “In others, for example where there is sidewalk traffic, we need to keep it linear. Down on First Avenue, just south of Broadway, we’ve got a cathedral oak that is 15 feet tall and an 8-foot-tall teddy bear magnolia that will grow to about 15 feet. Those grow upright and that’s how we’ve given some dimension between the taller buildings.”

Vandeventer says he envisions floral groupings based on color combinations, dimension, height, flow and just “what goes together.”

Team members who help achieve the stunning streetscapes, as well as manage the landscaping and maintenance projects, include Kenny Myers, Vivian Herrera Juarez and James Carsey. Among their duties is making sure some venues are cleaned early each morning and are ready for visitors.

Juarez arrives at work at 6am. After she opens the Ocala Skate Park, she heads over to Citizens’ Circle to make sure it is clean and that the restrooms are open. She then might manicure hedges around the City Hall complex, pull weeds or help replant certain areas.

“She also takes care of the Customer Service Center and the Ocala Metro Chamber & Economic Partnership’s Power Plant Business Incubator,” Vandeventer shares. “She’s got quite a bit on her plate.”

Among Myers’ duties is watering all the planters and hanging pots around the downtown area.

“Then there’s picking up trash, pulling weeds, spraying for weeds, trimming trees, sweeping streets, anything that’s needed,” he shares. “We do everything from Ninth Street to the post office, from Highway 441 to Watula Avenue, that includes Tuscawilla, the art park, all of that. We also maintain several parks. Any place there is a public meeting, we make sure it is clean.”

Myers, who previously worked as a mechanic, explains that he gets great satisfaction in his work for the city.

“People hate bringing their car in for repairs, so everybody’s angry all the time,” he recalls of his years working in a garage. “Now, I get people all the time telling us how pretty it looks and that we’re doing a good job.”

Carsey is the team’s irrigation specialist. He recently tied several new concrete landscape pots on the east side of North Magnolia Avenue into the irrigation system.

“We’re trying to get as many of our pots irrigated as we can so it frees up more time for an employee to be doing something rather than watering,” says Vandeventer. “We had gotten to where it was eight hours three days a week that one employee was dedicated to watering. The irrigation we’ve done has cut it down to about four hours three days a week, so we gained those hours of productivity.”

Rodriguez explains that more new irrigation points will be added over the summer as the team’s efforts will “expand up to the Magnolia split at the train station.” 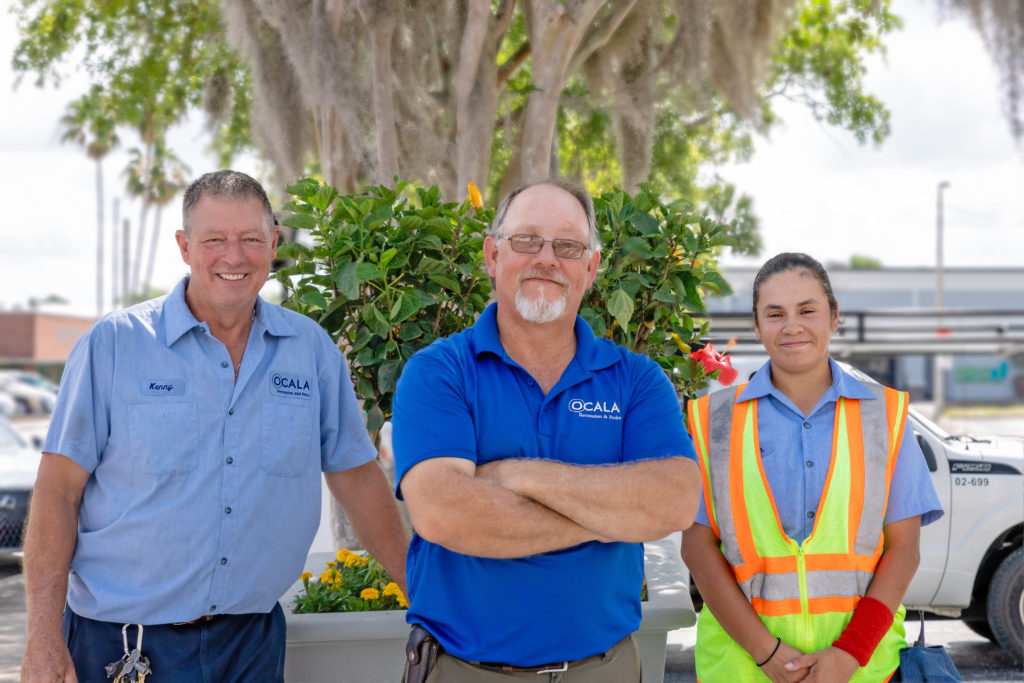 To achieve year-round beauty, the team changes out plants seasonally.

“Part of the challenge is to select plants that are going to thrive in a certain season and location,” Vandeventer says. “These will be full sun,” he notes, pointing out one of the new planters on Magnolia Avenue, “so we have to select plants that can take full sun most of the day. And we have to adjust the water because it’s in the sun all day, compared to one that’s in between two buildings and gets three hours of sun, in which case we need something to bloom with minimal sunlight.”

Among the reasons for beautifying the area through landscaping is to attract visitors and residents to spend time downtown and midtown.

“People often tell us how nice it looks,” Vandeventer adds. “And, sometimes, they don’t say anything at all, but you’ll see them standing there looking at it.”

Rodriguez says the team’s efforts do indeed consistently generate positive feedback, especially while they are working on site.

“Our residents, visitors and merchants often stop me while I am completing a monthly inspection downtown and ask, ‘What type of plant is this?’, ‘How often do you replace the plants?’ and my favorite is always, ‘Who do you hire to do your plants downtown?’ I, along with staff, take great pride in what they accomplish,” he enthuses. “The best feedback is that they love it so much they always want us to expand it.”

“We’re trying to do the maximum amount with the least amount of city taxpayer’s money,” Vandeventer offers. “We shop around to get the most bang for our bucks and that’s where we came up with the pots. Rather than cutting into the sidewalk, which costs a lot more, and putting wells in, it’s less expensive to put in a concrete pot. We move a pot around, pull a pot out, put them in different locations. As the years have progressed, so has the development of downtown. Now we’ve moved from the square area pushing north. There are hundreds of people down here every night. The hotel, the restaurants and bars and businesses, and everybody is walking, and this provides them a good atmosphere.”