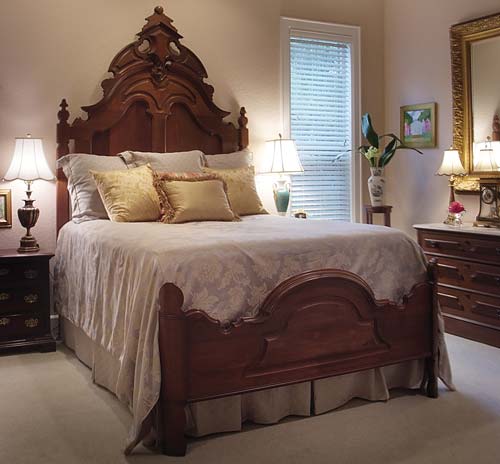 IF GAIL ELKES’ BED WAS A BOOK, it would be a historical novel. Built in England in the 1800s, the intricately carved walnut bed has seen more American history than most textbooks. Shipped across the ocean in pre-Civil War Georgia, the bed ended up first in Savannah, then in the town of Wrens.

“Some of daddy’s cousins were the first owners, although it was later given to other family members,” says Gail of the antique bed that passed through several owners and centuries, but never left her  family.

“I always admired the bed, even as a little girl, and when I’d see my cousins at family reunions, I made direct hints that I’d love to have it someday,” laughs Gail.

It’s easy to see why. The massive headboard curves to a towering architectural peak, giving dramatic height to the vintage piece. The adjoining footboard is simply designed, snugly cushioning an overstuffed mattress that begs for someone to take a nice, long nap. This is the kind of bed you’d expect to see in a cozy, mountain-side bed and breakfast. 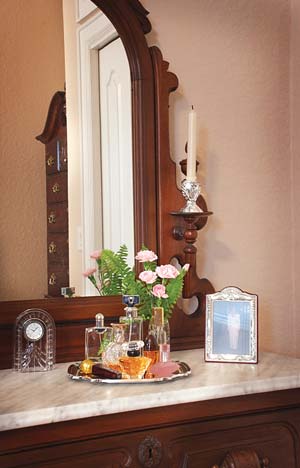 Fortunately, for Gail, her not-so-subtle hints finally paid off with her cousins who gave her the bed in the early 1980s. Gail chuckles that she was lucky her ceiling was tall enough to accompany the stately piece of furniture.

But that wasn’t all. The bed also came with two other matching pieces—a dressing table and side table, both topped with elegant white marble. The dressing table’s mirror is designed to mimic the bed’s headboard custom design. 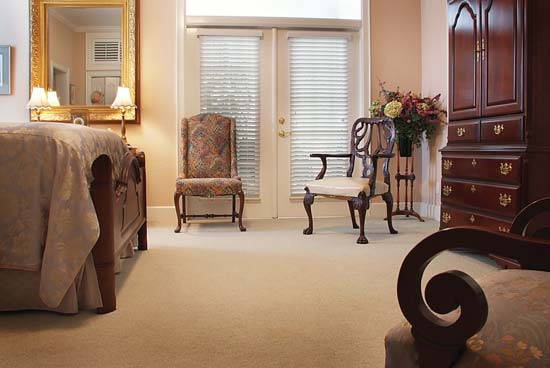 In Gail’s current Ocala home that she shares with her husband, Frank, the bedroom collection holds center stage in the master bedroom decorated by Michael Koontz. Subtle blue-green walls accentuate the room with equally understated bedding and pillows so not to draw attention from the eye-catching bed.

“Michael has such a fantastic eye for where things should go in a room,” adds Gail, who points to Michael’s decorative influence with two upholstered chairs by the side of the bed near the adjoining sunroom.

Another important element included in the spacious room is a group of paintings by Gail’s grandson, Sawyer. As his “number-one fan and collector,” Gail proudly displays Sawyer’s vivid oil and acrylic works that nicely complement the bedroom’s soothing setting.

“Obviously, I’m more than a little proud of Sawyer’s art,” smiles Gail. “I love sharing his art throughout our home.”

With heirlooms rich in both history and art, Gail Elkes has created a refined master bedroom with what she loves most—her family.