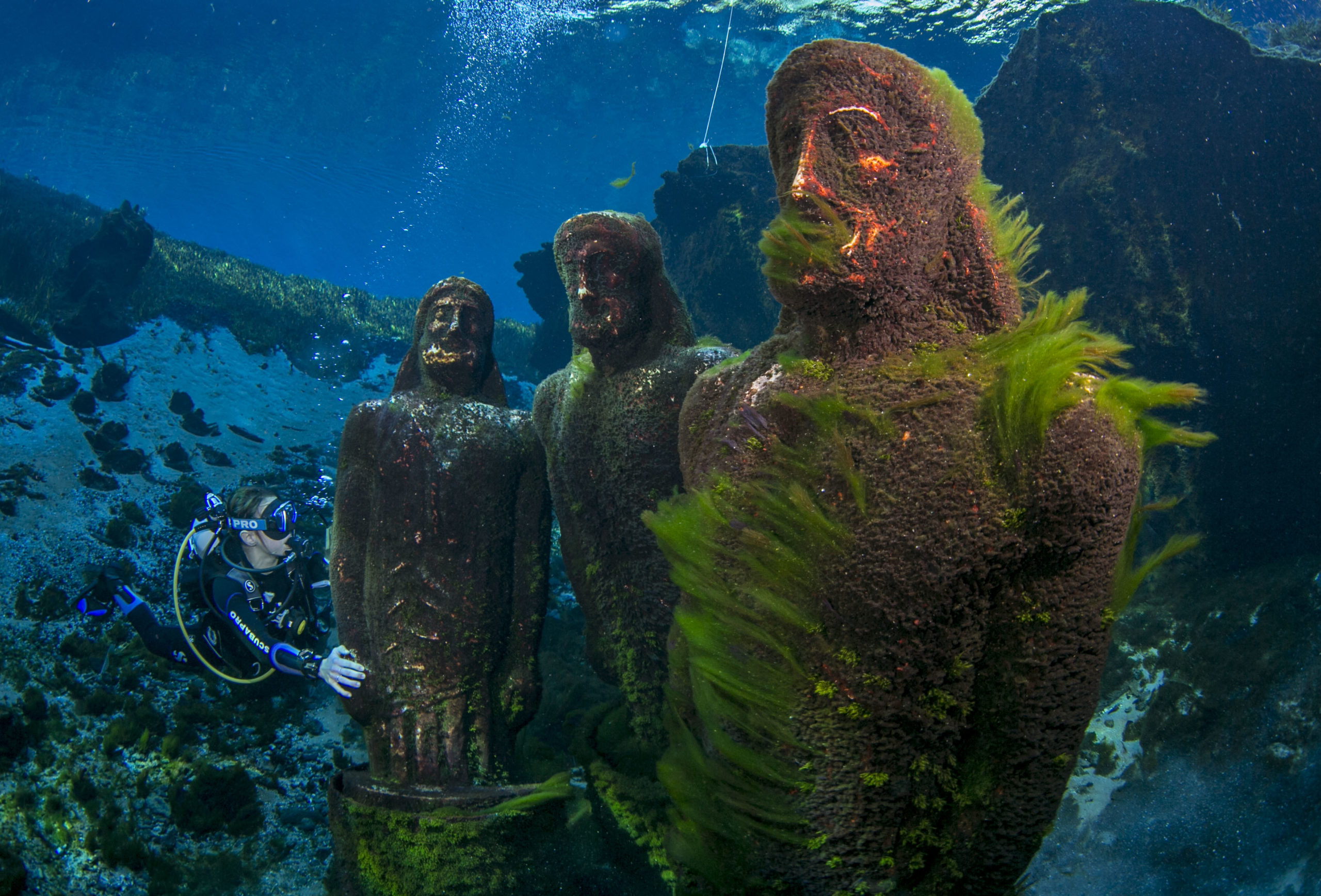 Once a month, in the early hours of a Sunday morning, when the warm sun’s rays illuminate the ethereal mist rising over the Silver River, a special squad of scuba divers slips into the headwaters at Silver Springs State Park, intent on a mission.

This dedicated team of volunteers, formed in 2014, has the unique task of cleaning the undersides of the world-famous glass-bottom boats and removing algae from the three Greek statues left behind from the filming of the I Spy television series in the 1960s. They are allowed into the waters of Silver Springs in cooperation with Cape Leisure Corporation, which has the concession to provide park services such as the glass-bottom boat tours.

The divers also pick up items, such as sunglasses, that inadvertently fall into the crystal-clear water, and pull weeds and algae from around some of the ages-old movie “wrecks” to make them more visible for glass-bottom boat tour guests.

“One wreck was used in the Jerry Lewis movie Don’t Give Up the Ship and the western Sam Whiskey, starring Burt Reynolds,” says Joe Wallace, the team’s founder and a certified rescue diver. “The statues and the wrecks are favorite features the boat captains point out to visitors as they navigate up and down the river every day.”

The team members do their work before the park opens to guests. Safety is of paramount importance and while divers are in the spring they work in pairs or groups and in concert with the boat captains. The volunteer team members come from a variety of backgrounds and share a love of scuba diving and a passion for helping preserve the magical experiences of Silver Springs.

Capt. Oscar Collins understands that passion. He has been a glass-bottom boat captain for 52 years.

“I will keep doing it as long as I can,” he says with a broad smile as he steps off the boat the team has just cleaned in the cool waters below. “I still like to do it. I enjoy dealing with different people and you just never know what you’ll see out there. That’ll keep you going.”

As a matter of fact, the team members discovered a glass-bottom rowboat that they believe dates back to the 1800s during one of their excursions. 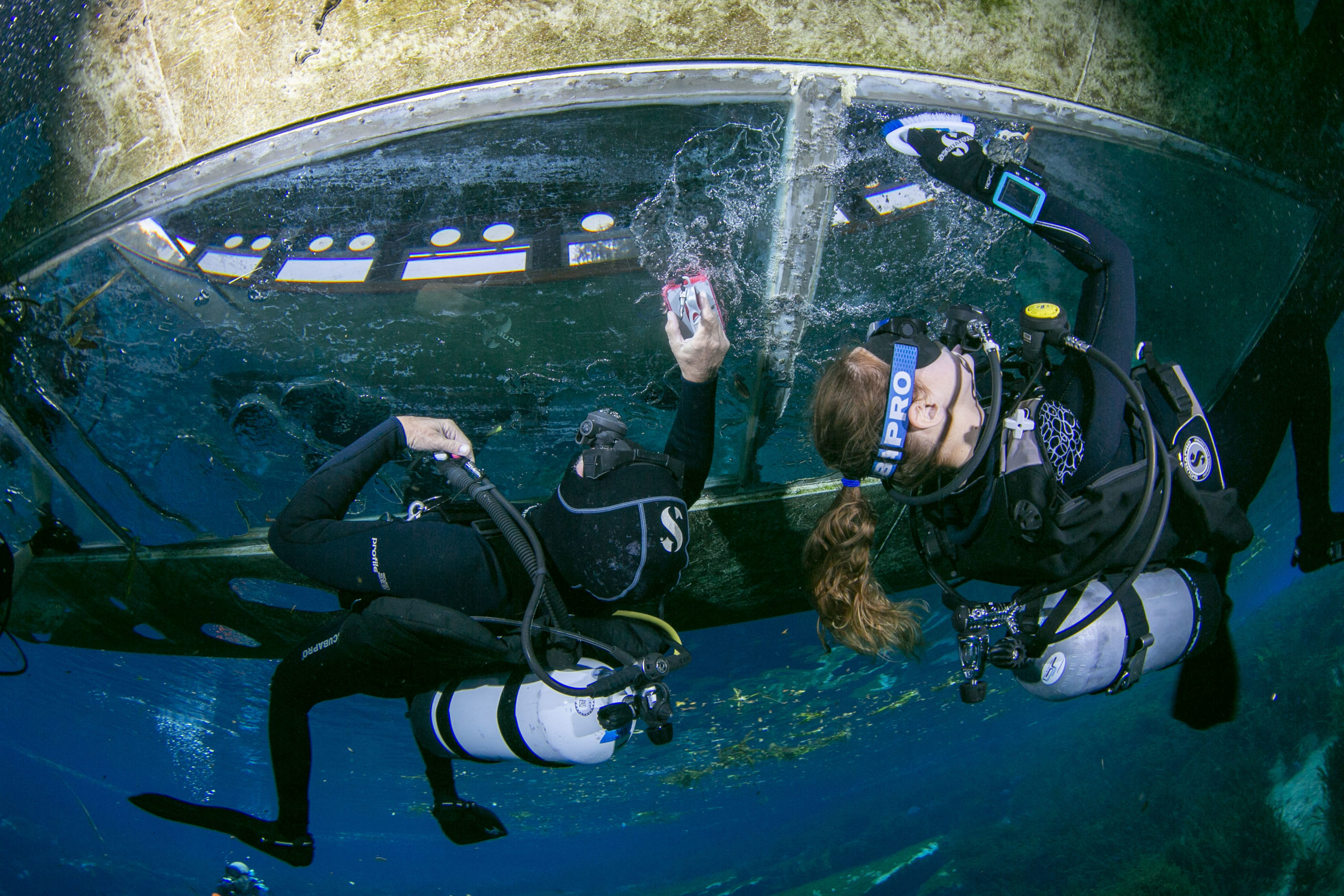 On a recent Sunday, Capt. Mike Rizzuto steered the Chief Emathla glass-bottom boat from the nearby dry dock into the headspring, where he was guided into position by hand signals from a dive team leader.

“These boats weigh 65,000 pounds without being fully loaded; they don’t stop on a dime,” Rizzuto explains. “While the divers are under the water, I have to take into effect the wind and the current.”

Sometimes, that means repositioning the vessel more than once to ensure the safety of the divers below. 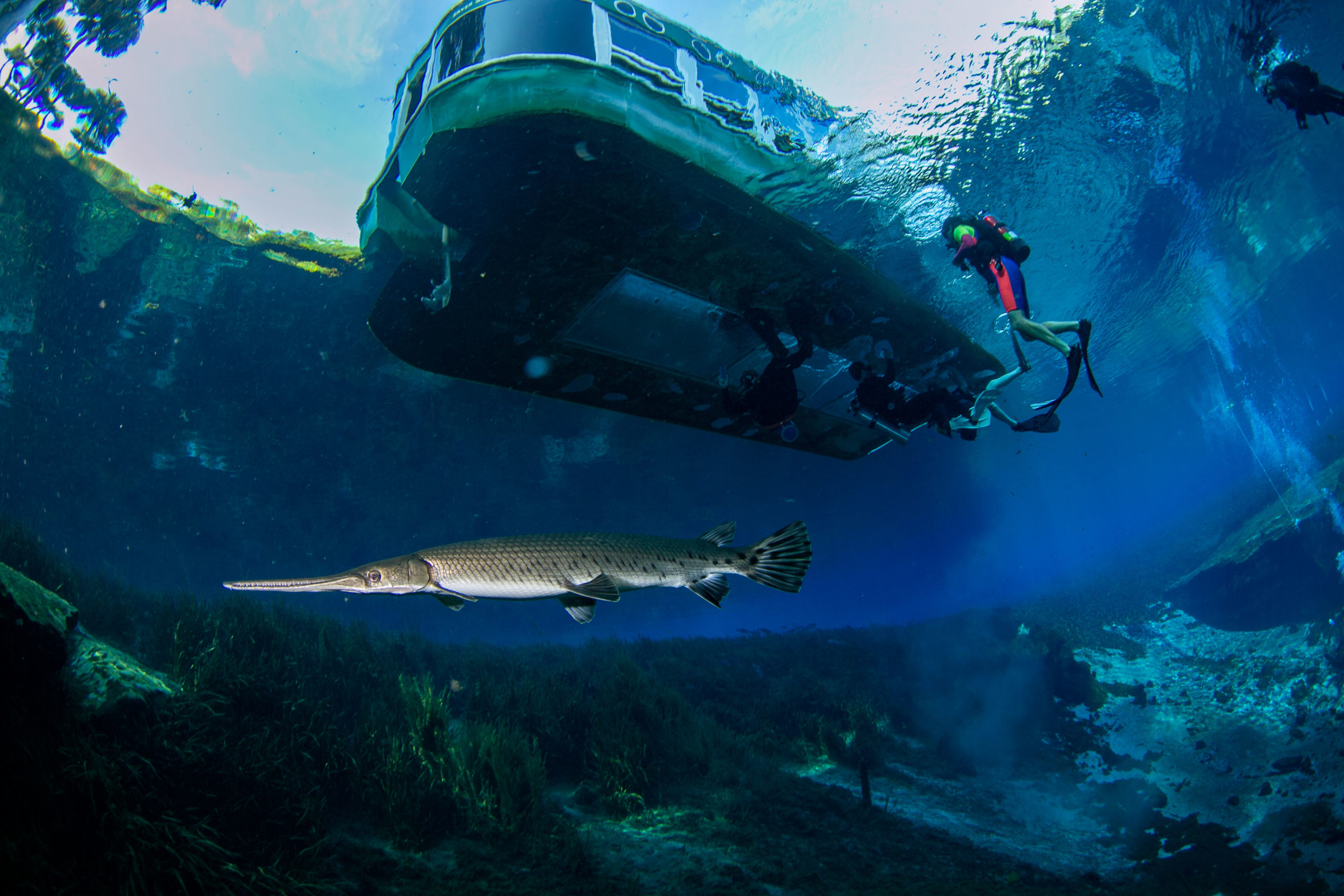 Once the glass-bottom boat is in a good position, the captain cuts off the electric motor to stop the motion of the propeller and calls out to the team leader that they can begin. The leader yells “divers down” as the group descends.

The divers have to work very quickly with brushes to scrub off algae from the glass panes because the boat will be moving with the streaming current of water spewing from the first magnitude spring. Once they swim from beneath the boat and reach the surface, the leader gives the “all clear” and the captain restarts the engine and glides away. 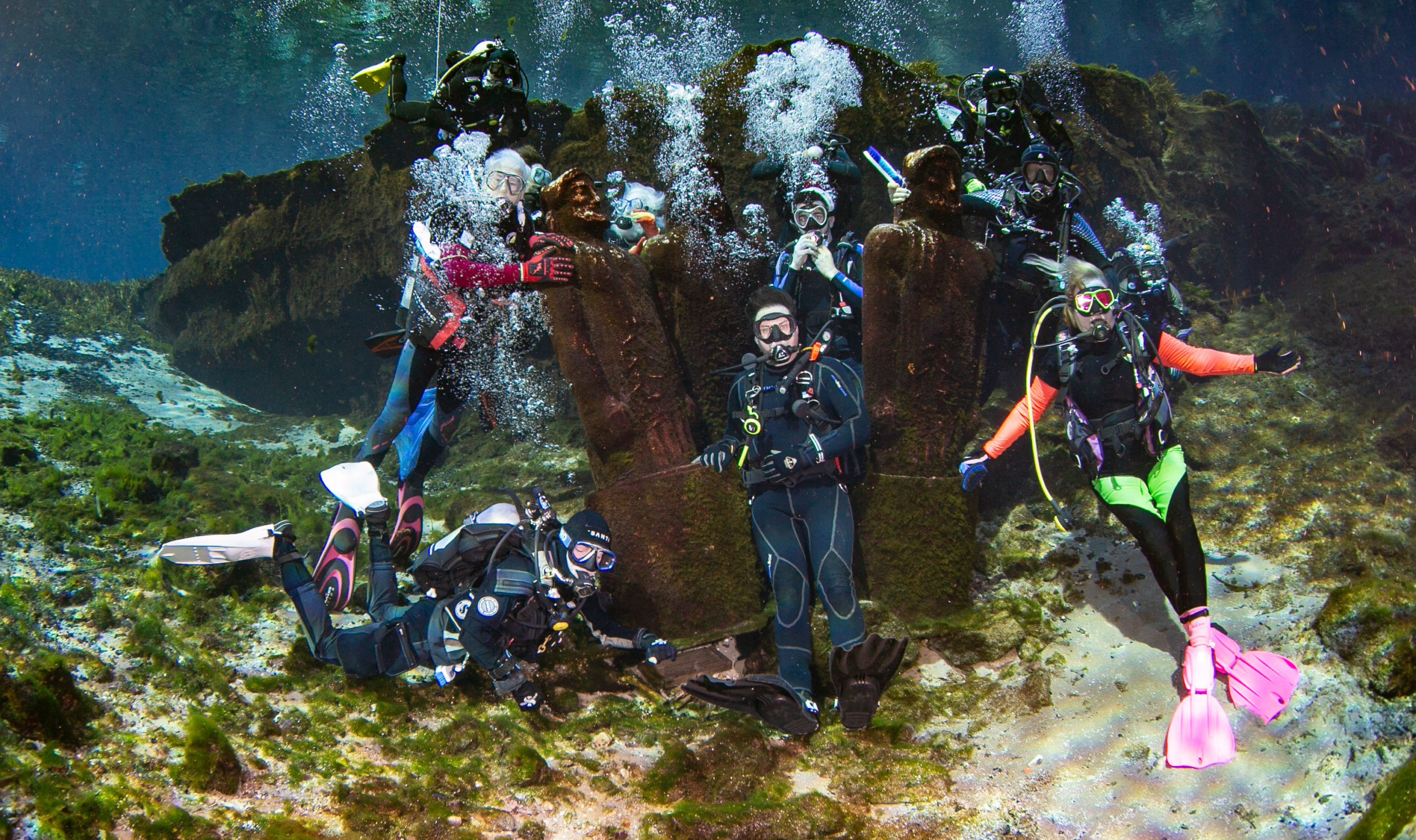 Tasha Briggs, a scuba diver for more than 20 years, worked as a computer programmer for 21 years, until she “got burned out” and wanted to find a job she liked. She now owns Dive Patches International, which supplies embroidered patches to vendors around the world. It was her friendship with Wallace that brought her to the dive team. One of her main jobs is helping clean the three underwater statues that were left from the I Spy episode The Seventh Captain, which was televised November 13th, 1967. Two other statues from the set are on display in the park’s ballroom.

“There are a lot of divers on this team who are even more experienced than I am,” Briggs offers, adding, “We have a lot of fun doing this.”

Wallace often helps rid the statues of what he calls “bright green troll hair,” along with diver Jennifer Nader.

“We try to be gentle to remove the algae as the statues are actually kind of fragile,” Nader offers. “It’s really strange because they move. We clean around the head, then the shoulders and down the back and go across the fronts and if there is loose algae, we whisk it away very gently.”

Kudos to the “Creature”

The team members are all certified at advanced level or higher and some are master divers or instructors. The group of 35 members includes two dive shop owners, two Silver Springs boat captains, three college professors, a park ranger and Emmy Award-winning National Geographic filmmaker Mark Emery. Team photographer Alan Youngblood, a founding member of the group, has documented every dive at Silver Springs since the inception of the group seven years ago.

On a typical Sunday, about eight to 12 divers will be on hand to help. Some of them remain on the dock to assist those who are going into the water.

Cheatom began a career at the springs at the age of 14, which spanned 55 years and included piloting the glass-bottom boats, cleaning them as a diver and handling snakes, alligators and the exotic wildlife that used to reside at the attraction.

Browning was famous for appearing as the grotesque creature in the underwater sequences in the 1954 film Creature from the Black Lagoon. He also appeared in two “Creature” sequels. Browning visited Silver Springs in September 2019 and team members presented him with his honorary membership. In a nod to the famous movie series, the logo of the Silver Springs Professional Dive Team depicts the face of the Creature from the Black Lagoon.