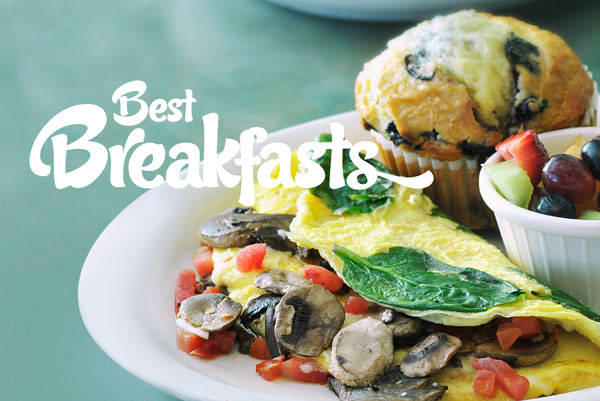 Dieticians—and moms—always say breakfast is the most important meal of the day. We’ve all heard the advice: Start your day with a wholesome, hot breakfast and everything else will fall into place. Breakfast doesn’t have to be bland or monotonous either, especially if you visit some of our favorite local restaurants known for their tasty breakfast specialties.

Omelets at Scrambles Cafe are truly works of art, and owner Allison Nile happily describes to customers how simple eggs can be turned into eye-appealing masterpieces.

“We put the omeletes under a broiler for a few seconds after they come out of the pan,” says Allison, who opened the restaurant 10 years ago with her husband Steve. “They’ll ‘puff up’ just before we bring them to the table.”

The broiler trick also makes the omelets light and fluffy, hardly a usual description for the egg dish perfected by the French in the 16th century. But for whatever reason, Scrambles Cafe’s omelets do seem lighter and less greasy. Nine different types of omelets, including a healthy “in-training,” cholesterol-free version, are served until 2pm, seven days a week.

And if all the variations—ranging from the Garden Delight to the Mile High Classic—are not enough, Allison’s team will prepare an omelet “eggsactly” your way. In addition, omelets with egg substitutes are also available. Omelet prices range from $6.59 to $8.29 and include a side of grilled potatoes, grits, or fruit and a home-baked biscuit or toast.

Not an egg lover? Scrambles Cafe has a variety of other menu favorites, including waffles with fresh fruits that are quickly becoming a fan favorite.

If restaurants could get awards for most creative menus, the Cotillion Southern Cafe would win hands down with descriptions like “Fiddle DeeDee Scramble,” “Cock-a-Doodle-Do Sandwich,” “Big Daddy’s Breakfast,” “Georgia Ice Cream,” which just happen to be cheese grits, and the “Hoot ‘n’ Holler Menu for Youngins.”

Open since 2007 and known for its exquisite Southern cuisine and charming ambiance, the Cotillion began serving breakfast earlier this year and offered the meal only on Saturdays. 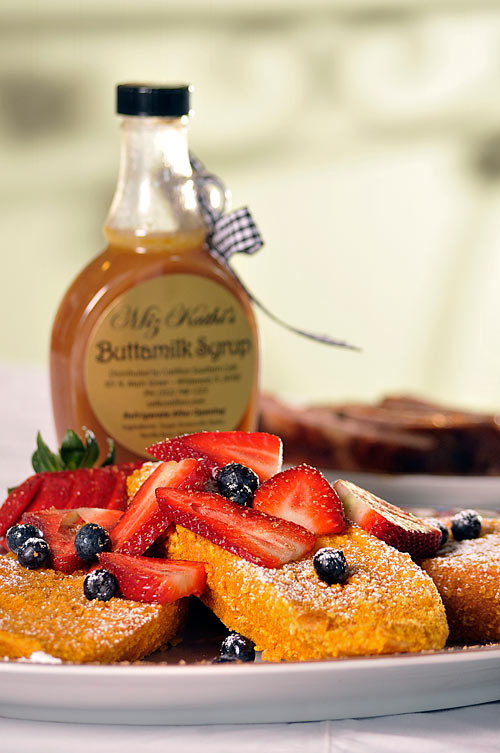 “The breakfast menu has become such a hit that in April we began serving it six days a week,” says owner Kathi Hall Vincent, an Ocala native who grew up on a farm called “Hoot ‘n Holler.”

One of Kathi’s most popular breakfast items is the “New Orleans French Toast” with her homemade “buttamilk” syrup, and for good reason. The thick slices of French bread are coated with her special spices and a secret ingredient that many have loved since childhood: Cap’n Crunch cereal.

Although it might sound overly sweet, it’s definitely not. The eggs and spices balance the light coating of cereal, which adds texture to the bread. Her buttamilk syrup is so mouthwateringly delicious that regular customers stopped asking for other toppings. In fact, customers have encouraged her to bottle the syrup, which she makes herself with real butter and vanilla beans.

The Cotillion Southern Cafe serves breakfast from 8-10:30am, Monday through Saturday. Visit them online at cafecotillion.com.

Looking for a great country breakfast not far from home? If so, head to the heart of horse country where Crossroads Country Kitchen has a menu that includes down-home favorites like applewood-smoked bacon, corned beef hash, catfish-n-eggs, country fried steak with white gravy and the pièce de résistance—fresh country ham.

When most diners hear the words country ham, they think salty. Not at Crossroads, however. Here, the thick slice of ham is flavored perfectly without an overwhelming taste of salt. 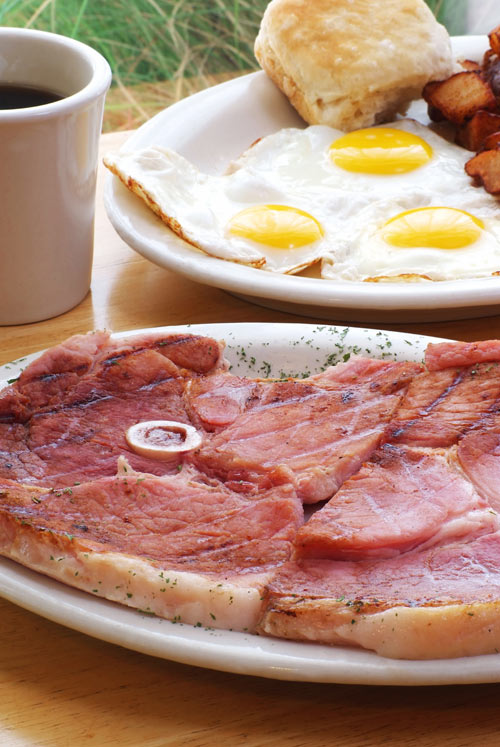 “Some people come just for the country ham,” says owner Jim Aiello. “I liked it, so I put it on the menu, and everyone else liked it, too.”

Jim brought his country recipes and menu from The Spiced Apple Restaurant in Ft. Lauderdale, which he owned for 25 years. He retired to Destin, but after a few years, he was tired of golf and traffic, so he came to Ocala where he had family. Jim opened Crossroads Country Kitchen eight years ago when he decided retirement just wasn’t for him.

Serving breakfast daily until 4pm has been a big hit with what Aiello describes as his “mixed” clientele. Naturally, employees of nearby horse farms are regulars, but he also gets retirees from The Villages and the SR200 corridor.

“I was lucky,” says Jim with a smile. “The husband of my head waitress is a retired baker, and he was looking for something to do, too.”

Jitterz Cafe is a happening place on Sundays when breakfast is served all day. Waiting time is tolerable because the self-service coffee bar keeps customers happy until a table is available.

Anyone who likes biscuits and sausage gravy seems to know about Jitterz Cafe, a small eatery tucked into a corner of Almeida Plaza just south of Belleview. Owner Donna Dreggors recommends getting there early if you want biscuits and gravy “because we can only make so much.” 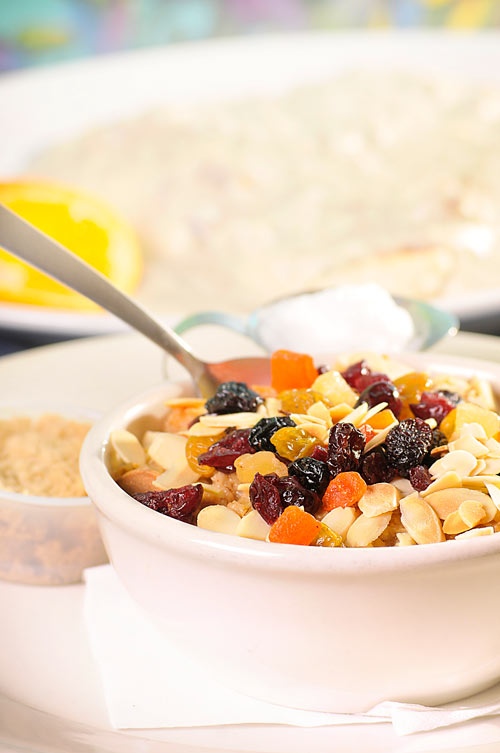 If you’ve never had the Southern staple, you can try one-half order to see if you like it. Chances are, you will. Jitterz’ biscuits are sliced in half and slightly toasted, which keeps them from becoming soggy in the white gravy. Flavored with a generous amount of sausage, the gravy is not overpowering or pasty. The consistency was perfect—not too thick or too watery.

Donna knows that not everyone lives on gravy alone, so she’s developed an extensive menu that appeals to all ages and tastes. Surprisingly, the top-selling breakfast item is oatmeal—and not just any oatmeal. It’s made with granola and fruit, and nothing like this comes in a grocery store box.

In addition to being available all day on Sunday, breakfast is served Tuesday through Friday until 11am and on Saturdays until 11:30am.

As you travel south on US Hwy 441, you can’t help but notice the overflowing parking lot at Billy’s Cafe every morning and especially on weekends. Billy’s has been a breakfast icon near The Villages for more than 10 years, and sooner or later, everyone stops in for the homemade pancakes.

Pancakes and crepes have been the signature dishes since the cafe opened. The menu lists more than 17 different types of pancakes, not counting the breakfasts that include two pancakes alongside eggs, bacon or sausage. Flavors include cherry, banana, blueberry, strawberry, apple, pecan and tropical, which contains both coconut and bananas. Flavored pancakes are $6.29 for three and a dollar less for two. Buttermilk pancakes and waffles are $4.99. 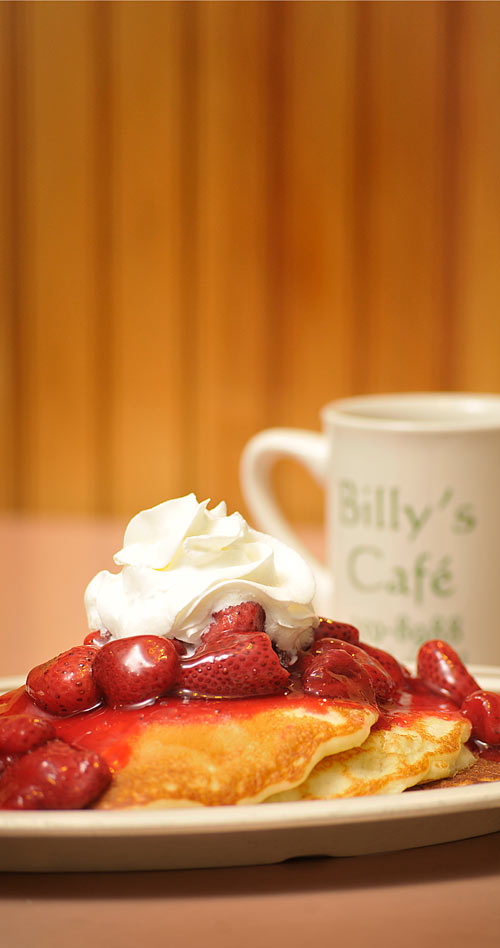 The restaurant offers just as many varieties of crepes. The server mentioned that the “Black Cherry Roll-Up” is quickly becoming one of the most popular dishes. Similar to a crepe, the specialty item sells for $6.29 and comes with whipped cream.

Although Billy’s does offer lunch, the breakfast menu is by far larger.

Billy’s cafe serves breakfast from 7am until 2pm seven days a week.

C&K Country Kitchen is one of those places where everyone knows your name. The clientele are regulars who enjoy a home-cooked breakfast and the friendly banter that co-owner Carl Wiesjahn starts with customers as they approach the counter to order.

“Where are you from?” he asks. “You don’t have an accent… how do you want your eggs cooked?”

All the while, he’s hustling to get your coffee or juice while his wife Kathy is in the commercial-sized kitchen cooking her down-home favorites. 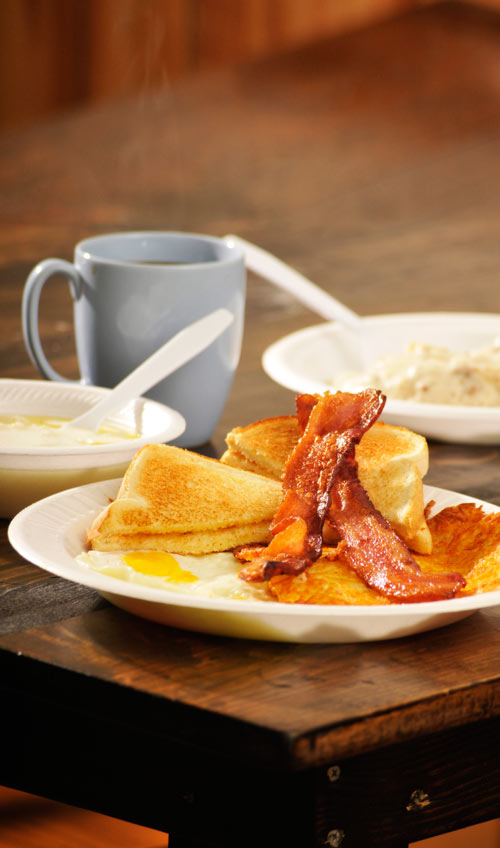 Kathy began the business 21 years ago in a circa-1930s building at the corner of Hwy 301 and CR 466. At first, it was a convenience store, but her reputation for good food won out and the location eventually became a breakfast and lunch diner.

“It’s like I’m cooking for a big family,” explains Kathy, who is a fifth-generation Floridian. “We don’t have a lot of different things on the menu because I want to maintain the quality.”

C&K Country Kitchen has all the usual egg dishes, including omelets and egg sandwiches, along with pancakes and biscuits and gravy. Kathy says the top seller is probably the No. 2 breakfast with two eggs, two pieces of sausage, ham, or bacon with toast and grits or hash browns for $4.79. The same breakfast, which includes only one of those items and is known as the No. 1, is only $1.99.

The restaurant retains the building’s original character with the pine-knotted tables and handmade benches adding to the casual decor. Carl and Kathy describe it as a “low-frills” place. Breakfast comes on Styrofoam plates with plastic utensils but the food is freshly cooked to order.

And don’t be surprised if Carl calls you by name and even remembers what you like to eat on your return visit. It’s definitely like coming home.

Breakfast is served from 6-10am Monday through Friday and 7-11am on Saturdays.