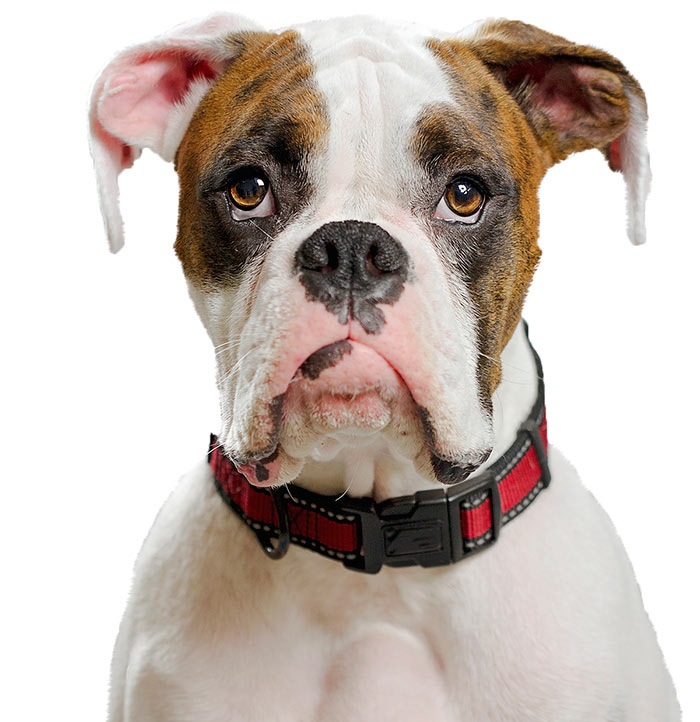 My dog’s better than your dog.

That catch phrase was from a popular dog food advertising jingle in the 1960s. But it might as well be the definition of dog showing. For at its heart, a dog show is a competition to prove who has, at least on that particular day, the best dog.

And although there is fun to be had, make no mistake about it, the quest for best-dog bragging rights is serious business. Purebred dog breeders are devoted to their chosen breed or breeds. They spend years and make considerable financial investments to develop their particular bloodlines. The goal is to produce dogs that best meet their particular breed standard of conformation, temperament and movement. Dog shows are the proving ground for their breeding program. Puppies from champion show dogs fetch top prices from dog enthusiasts, perhaps looking for the next best dog.

All this doggy drama will be on full display at the Horse Country Cluster Dog Show November 12 through 15. Sponsored by the Greater Ocala Dog Club and the Seminole Dog Fanciers Association, the four-day canine extravaganza will take place at the GODC’s 40-acre facility in Lowell, just northwest of Ocala. The showgrounds take on a festival atmosphere with non-stop action in 10 rings from 8am until 5pm. A virtual city of dog fanciers’ recreational vehicles, as many as 140, rolls in and sets up on the showgrounds, complete with a food and merchandise vendor village. 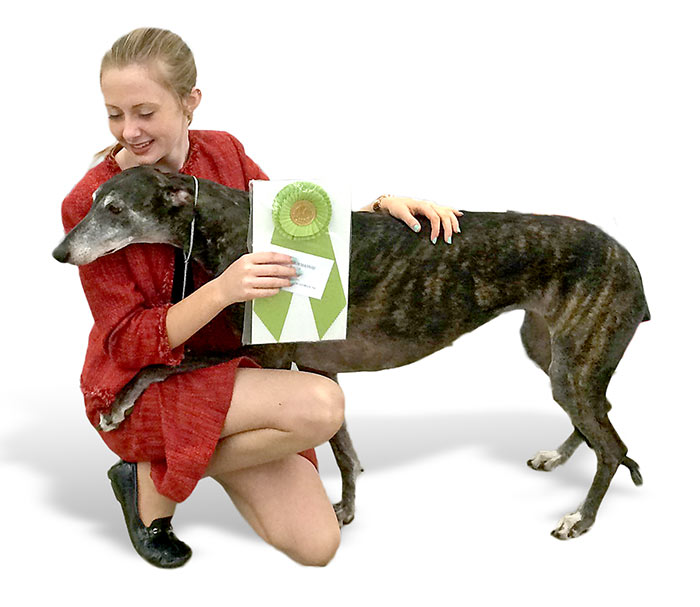 “It’s our biggest show of the year,” says Phil Briasco, GODC president and show chairman. “We have dogs that come from all over the country. It’s an all-breed show with conformation and obedience competition. The total entries for the four days is about 6,000 dogs. We invite everyone to come out and enjoy the show.”

For the general public, the Horse Country Cluster Dog Show provides a great opportunity to see a variety of dog breeds in one place. The American Kennel Club, the official United States registry for purebred dogs, currently recognizes 184 breeds. Expect to see many Labrador retrievers, the top AKC-registered dog for 24 consecutive years. But newer additions to the AKC roster, such as the boerboel or the xoloitzcuintli, might make an appearance, too. All will be competing to be named Best In Show, and there’s a unique bonus. The Horse Country Cluster Dog Show is actually comprised of a different complete show on each of the four days. This means that there will actually be four Best In Show dogs chosen over the course of the event.

Most people have watched the nationally televised annual Westminster Kennel Club Dog Show and seen the dogs being led in on leashes. The person on the other end of the leash is called the handler, and they play a key role in a dog’s show career.

Ocala native Caitlyn Jewett is a third-generation dog handler and began showing dogs in fun matches when she was just 6.By the time she was 10, Caitlyn had shown her first AKC champion, a border terrier named CB’s Frankly My Dear. She has since followed that with two more champion greyhounds—Grandcru Stag’s Leap With Mistweave JC and Grandcru Kistler in 2012 and 2013, respectively.

All three dogs, which Caitlyn raised from puppies, live with her. At home, they’re known by their call names, Scarlett, Jo and Kist, respectively. Joining the champion trio is Noble, a year-old Briard, as well as a pony, a goat and two rabbits.

“I grew up at dog shows,” says Caitlyn, now 14. “The family story is that I went to my first dog show when I was 1 month old. I’ve been going ever since.”

Caityln’s mother, Maureen, is an AKC-registered professional dog handler, as was her late father, Frank. When she turned 9, Caitlyn began showing as an AKC junior handler and can continue showing as such right up until she turns 18.

“I show in both junior showmanship and conformation,” says Caitlyn, who has been homeschooled, attended Blessed Trinity and will go to a charter school before transitioning to Florida Virtual School. “In junior showmanship, it’s all about the handler’s abilities. In conformation, the dog and how it’s shown is more important. The handler and the dog have to work as a team.”

Caitlyn likes to start training puppies as soon as possible, focusing on walking on the leash and posing for the judge. She generally puts in “short daily sessions to keep the dogs fresh and happy.” In AKC shows, puppies can first be shown in 6 to 9 months classes but earlier in fun matches. Treats play a big role in dog show training and at the shows.

“Giving a dog treats helps them focus on you,” says Caitlyn. “At home, I use just regular doggie treats. At the shows, I use cut up hot dogs and even steak. That really gets their attention.”

Handlers generally dress in office attire, including jackets with pockets for treats.

“Handlers have a big dry cleaning bill because of the treats we keep in our pockets,” says Caitlyn. “When we use a new dry cleaner, we always have to explain why our jackets smell like hot dogs.”

Dog showing involves a lot of travel to and from weekend shows. Like most handlers, Caitlyn and her mother travel in a show dog-customized RV. They generally go to 50 to 60 shows a year, mainly in the southeast region.

“I really love dogs and showing. It’s a lot of work, but it’s a lot of fun, too,” says Caitlyn, who also takes Irish dance lessons. “I have so many friends from all over the country. Dog show people are like one big family. We’re all very competitive, but we also help each other out, too.”

As for becoming a professional dog handler when she turns 18, Caitlyn is leaving the door open.

But until then, odds are good that Caitlyn will lead a few more dogs to their championship titles. Treats included. 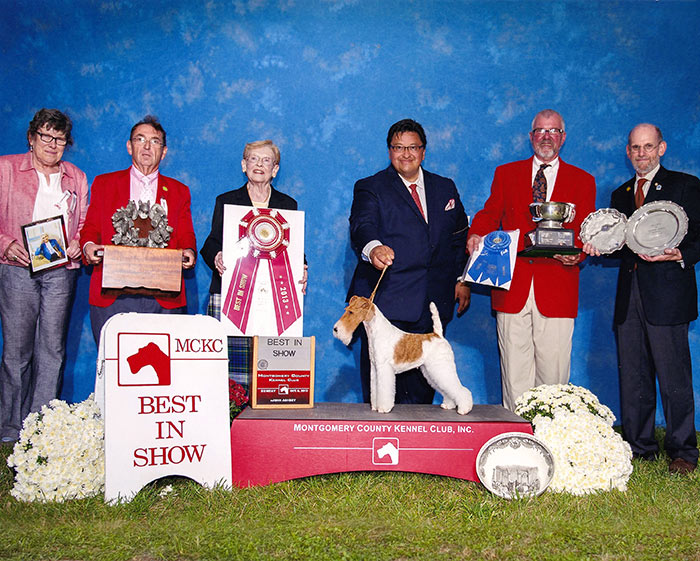 All Hail The Judge

A show dog’s fate rests largely with the judge, who has a mental picture of the perfect dog of that breed. To become a judge, a person must devote many years to meeting and exceeding the AKC requirements. For example, a person can’t even begin the process until he or she has more than a decade’s worth of experience as an owner, breeder and exhibitor. Additionally, the aspiring judge must have bred four to five litters and at least two champions. Then there’s written, oral and field tests to pass. You get the picture—there’s no fast lane to becoming an AKC judge.

Ocala resident Roberta Campbell has successfully navigated that challenging road. As a breeder and handler for 25 years, Campbell had numerous champions in the Terrier group. She even worked for the AKC out of their New York office for many years. Since 1997, she’s been an AKC judge and is now approved in the Terrier, Hound and Herding groups, as well as Best In Show competition.

“I’ve traveled all over the world as a judge,” says Campbell, who is the current GODC vice president. “These days, I generally go to shows two weekends a month. I still get to see a lot of dogs, and that keeps me sharp.”

At a large show, Campbell can eye 1,500 to 1,800 dogs in a day. It’s a daunting task to evaluate and judge so many dogs with so much on the line. As the dogs are led into the ring by their handlers, Campbell stands in the center and scans them as they gait around the edge. Each dog is then stacked, a.k.a. posed, to show the dog to its best advantage in profile.

“I like to take my time and observe each dog for conformation, overall balance, movement and its personality,” says Campbell. “Next I go over each dog with my hands, checking things like skull shape, depth of chest, spring of ribs, coat and body condition. Then I’ll ask the handler to gait the dog around the ring. All of this goes into evaluating how closely that dog displays its specific breed characteristics. Judges only have a matter of minutes to pick the best dog.”

Even after a lifetime involved with dogs, Campbell is still invigorated by the dog showing sport.

“There’s always something to learn,” she says. “It’s great seeing old friends and making new ones. But the dogs are the best part of it all. They bring me great joy.” 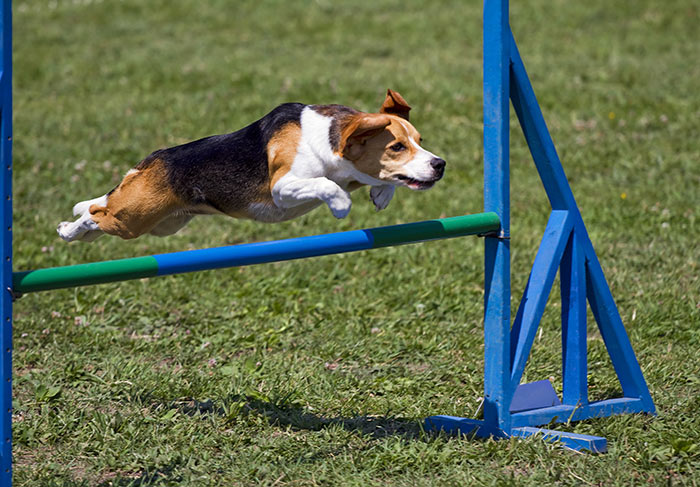 What’s Going On In Those Rings?

The majority of dogs in conformation shows are competing to earn points toward their AKC championship title. A dog must accumulate 15 points awarded by at least three different judges to become an AKC champion (CH). Once that happens, CH. precedes the dog’s name. Dogs can also become grand champions (GR. CH.) by competing against other champions, primarily at the Best of Breed level.

Male and female dogs of each breed initially begin the day by competing separately in one of the following classes: Puppy (6 to 12 months), 6 to 9 Months, 12 to 18 Months, 12 to 15 Months, 15 to 18 Months, Novice, Amateur-Owner-Handler, Bred by Exhibitor, American-Bred and Open. Then, the first-place dogs, males and females separately, in each class are judged together to determine the best of the winning dogs. Only the Winners Dog (best male) and the Winners Bitch (best female) receive championship points. The number of championship points awarded at a show depends on the number of dogs and bitches of the breed actually in competition.

The Winners Dog and Winners Bitch are then judged with dogs that are already champions for their respective Best of Breed award. Each Best of Breed winner represents that breed in the Group portion of the show. There are seven AKC Groups: Sporting, Hound, Working, Terrier, Toy, Non-sporting and Herding. Each recognized breed belongs to a specific group, such as German shorthaired pointers in the Sporting group, Yorkshire terriers in the Toy group and German shepherds in the Herding group. The seven Best of Group winners then go on to the Best of Show competition at the end of the day.

Dogs and handlers in the obedience classes are judged on their ability to execute a predetermined set of exercises, such as heel, sit, stay and come. The duo is scored on a scale of 0 through 200 points and have to score at least 170 in three shows to earn an obedience title. Examples of the latter include companion dog (CD), companion dog excellent (CDX) and utility dog (UD). There are many more obedience titles, and the exercises are increasingly more difficult with each advanced title.

The American Kennel Club was founded in New York in 1884.

The Greater Ocala Dog Club was incorporated as a not-for-profit organization in 1972.The first AKC all-breed dog show and obedience trial hosted by the GODC took place on April 6, 1974, at College Park Elementary. The GODC purchased 20 acres on Old Gainesville Road in November 1986 and had its first AKC show on the new grounds in April 1987. Additional acreage was purchased in 1989 and 1999 to bring the GODC showgrounds to 40 acres.