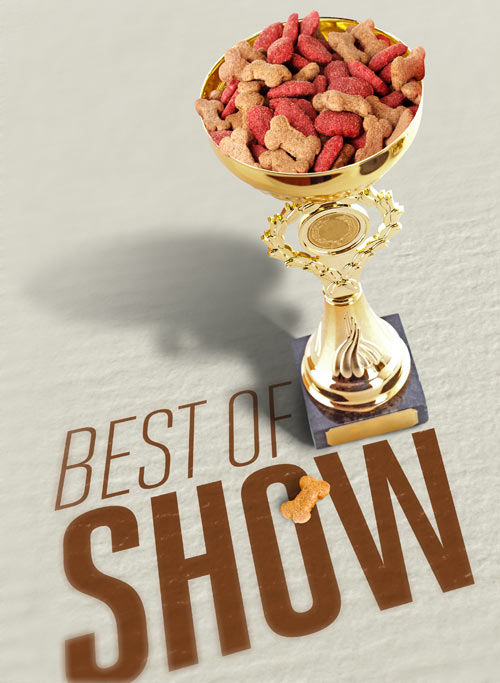 Marion County is known for its equine superstars. But another group of four-legged phenoms compete just as hard and bring home their fair share of awards and accolades, too. Ocala is home to a multitude of canine champions in the show arena. From top name breeders and professional handlers to amateur and junior owner/handlers, these dedicated dog lovers spend hours training, grooming, traveling and competing with their beloved canine companions. And while some are “born into it” having had show dogs in their lives since childhood, others get involved on a whim and enter a show only to find that they just can’t get enough of it. One thing they’ll all agree on, though, is that working with these special animals is an incredibly rewarding experience. 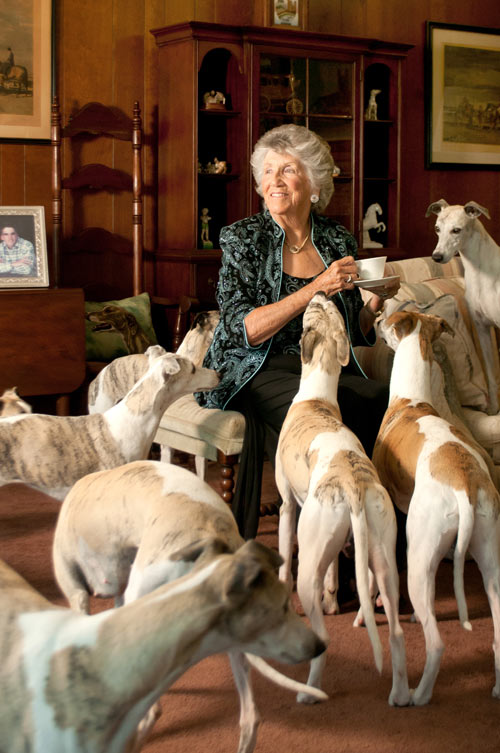 Drive onto Carol Harris’ Bo-Bett Farm in Reddick and there’s no doubt that she is an animal lover. Along with approximately 50 horses, Carol’s farm is home to over 50 dogs.

“I’ve been breeding for over 60 years now, and I still love it as much as I did when I started,” says the energetic and spry 89 year old. Over the past six decades, Carol has bred and shown several different breeds, including shepherds, collies and a number of terrier breeds. She concedes that after decades of grooming and hand-stripping the longer haired breeds, working with the shorter-haired dogs is far easier. Today, Carol is the proud owner of over 50 whippets and Italian greyhounds.

She may be a bit biased, but Carol describes the whippet breed as“the best kept secret in the dog world,” touting their outstanding temperament and general love of people.

And Carol’s dogs, which are always eager to greet and play with visitors, truly excel in the show arena.

“We’ve just been very lucky,” says Carol modestly. And even after 60 years experience, she says she never stops learning.

“I’ve always wanted to work with both horses and dogs, so I watched lots of people. I learned from lots of people. I’m learning from the handler I use right now, and he’s 27 years old. You’re never done learning,” she says.

Though Carol claims she still has much to learn, while watching her with the dogs, you can see that interacting with animals comes naturally to her.

“Just living with them, you train them,” she says. “You have to get into their minds, their souls, in order to understand them.”

Not all dogs, no matter how beautifully bred, turn out to be good show dogs though, Carol explains. She says they have to love to show in order to win.

“You can’t make them win. There are no tricks. If they don’t love what they do, they can’t be winners, and if that’s the case, then you can’t ask them to compete,” Carol says.

Perhaps what is most impressive about Carol’s breeding and showing program is not the numerous awards and titles she’s won or the fact that people from all over the world, including Korea, Japan, South Africa and Singapore purchase her puppies, but that the entire operation is managed by Carol, her daughter and one other employee who “keeps things neat.”

“My daughter and I feed them (the animals) ourselves. We don’t eat until they do,” she says. And Carol’s whippets, though top competitors, snuggle up in the bedroom with her every night.

“My program is simple, but it works,” she says. “Be with them, and be patient.”

Carol shows dogs for about two years before they retire, and she’ll only campaign three or four dogs at a time.

“Once the dog doesn’t get excited about showing any more, it’s time to stop. You can’t ask to win everything,” she says with a smile. 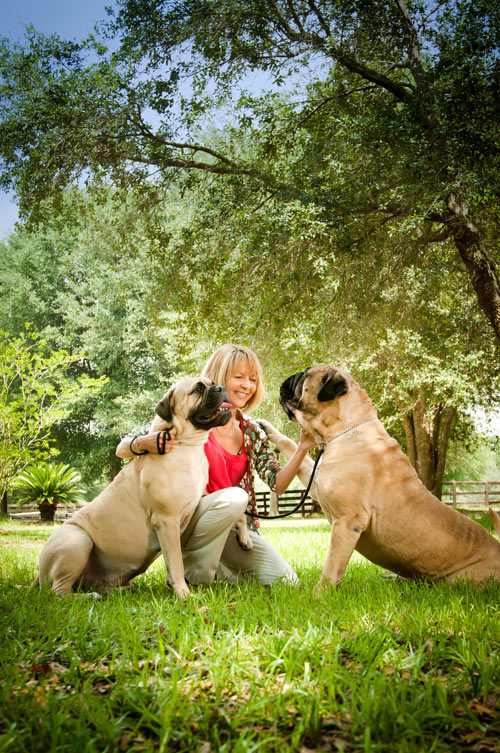 Barbara Carry had no interest in showing dogs when she bought her bullmastiff puppy Leo three years ago.

“I knew I wanted a big dog, so I started researching different breeds,” says Barbara. The bullmastiff’s temperament and quiet nature appealed to Barbara, who lives on a horse farm in Ocala.

“I didn’t want to have to worry about something that wouldn’t get along with my horses or barn cats. The bullmastiff just seemed like a good fit,” she explains.

After doing some research on the breed and contacting a reputable breeder, Barbara purchased 8-week-old Leo without any intention of pursuing a career in showing.

However after an encounter with the breeder a year later, Barbara was convinced to enter Leo in a show in Orlando—even though he had never had any experience or training in a show arena.

“It was so funny,” recalls Barbara of that first competition. “The handler kept trying to position him, and he just kept moving back out of position. He had no clue what we were doing to him,” she laughs. But despite not having any understanding of the situation, Leo managed to beat out several other well-known dogs.

“He won 12 points toward his ‘Champion’ title, and that is practically unheard of, especially considering he had never shown before,” explains Barbara, who was “hooked” after that first show.

She continued on to the winter circuit in Brooksville, which consists of three weeks of competition, and finished up with the Best of Breed title—quite an accomplishment for a new show dog.

It wasn’t long before others in the dog show world took notice of Leo. Eventually, Barbara was approached by a breeder in Rhode Island and decided to breed Leo, who had since gone on to win a “Champion” title after winning 15 points in competition.

Today, Barbara owns and shows one of Leo’s daughters Lucy.

“I started going to handling classes so I could show Lucy myself,” says Barbara.

“It’s actually quite hard to do everything right, especially since they are living, breathing animals. But all of the judges I’ve encountered have been very helpful and have given me tips and pointers along the way,” she says.

Leo continues to show but splits his time now between competing and working as a therapy dog.

“I take him to visit the kids at Shands, and everybody just loves him,” says Barbara.

“Leo is always happy and will do anything, but Lucy really wants to show,” she says of the two dogs. Her goal is to continue showing Lucy and for her to earn the “Champion” title just like her father before breeding her.

“It’s just so much fun. I’d like to keep a puppy or two of Lucy’s and continue showing,” she says. For Barbara, a sport she never had any intention of pursuing has turned out to be, in her words, “a very rewarding experience.” 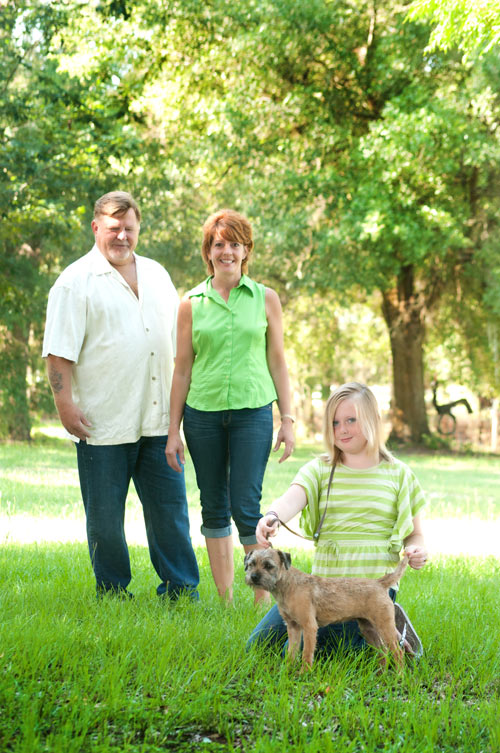 Ten-year-old Caitlyn Jewett probably spends more hours at dog shows than she does at her home in Citra. She, along with her parents Frank and Maureen, estimates that they spend at least 46 weekends of the year traveling to shows.

“It can be a hard life with all of the traveling, but we love it,” says Maureen, who compares their lifestyle to that of a “traveling gypsy.” Frank and Maureen are professional, AKC-registered dog handlers.

“We get paid for our hobby,” says Frank, who was also introduced to the dog show world as a child.

“My parents showed dogs, and I was always around, so I started showing. Then, one day, someone asked me to handle their dog, and it just sort of took off,” he says of his upbringing. “If she becomes a professional, she’ll be a third-generation handler,” he says referring to Caitlyn.

And Caitlyn seems to be on the right track. She began showing when she was 6 years old, though she attended her first competition as a 2-week-old infant. She has already competed at the prestigious Westminster Kennel Club Dog Show and the AKC/Eukanuba National Championships and qualified for this year’s Eukanuba show in December. And while her parents handle other people’s dogs professionally, as a junior handler, Caitlyn must own the dogs she competes with. She currently owns and shows a boarder terrier named Scarlett, who is qualified for this year’s National Boarder Terrier Championships. Caitlyn also co-owns a greyhound named Joe.

Because of her busy show schedule, Caitlyn is homeschooled by her mother, who is well aware of the sacrifices her daughter makes to work with the dogs. Maureen was involved in 4-H as a child and worked with show cattle before moving on to dogs at the age of 9.

Both Frank and Maureen were involved in breeding before focusing primarily on handling. Their registration with the AKC as professional handlers makes them sought after, as they have to meet certain criteria in order to qualify for the certification. Yet, though they are in high demand, Frank and Maureen limit the amount of dogs they will work with to between 12 and 15.

“With fewer dogs, you can give them more attention, and that’s important,” says Frank. He explains that handling dogs is far more in-depth than what the audience sees on television. Frank, Maureen and Caitlyn spend hours preparing for those few moments in front of the judges, doing everything from training and exercising to grooming and caring for the dogs.

“It’s a lot more work than you would think,” says Maureen, whose day often begins very early in the morning and can last until well into the evening. “And if it rains, it can put a complete glitch in your grooming plans,” she laughs.

When asked what qualities make a good handler, Frank refers to a “natural skill.”

“You have to make the dog always look like its showing. You have to show off its best qualities and hide its flaws,” he says. “You shouldn’t notice the handler, it’s all about the dog.”

The Greater Ocala Dog Club hosts some of the top dogs in the nation at several shows throughout the year. President Phillip Briasco estimates somewhere between 1,700 and 1,800 dogs from around the country make their way to the grounds during the bigger competitions along with anywhere between 15 and 20 different vendors.

“Ocala is not just horse country. We’re a huge dog community, too,” he says, boasting of several top breeders, handlers and judges based in Marion County. “Each year the shows bring in millions of dollars to our local economy, and we’ve produced many of the top dogs in the country,” he says.

The dog club also hosts classes in confirmation, obedience, rally and agility throughout the year, and many of the top AKC judges are members. Phillip recommends that anyone interested in showing should take the time to research the breeds they are interested in.

“Research is key,” he says. “Talk to breeders, owners and handlers. Learn everything you can so that you know what to expect.”

Phillip says spectators are always welcome at the Ocala Dog Club’s shows and that they are very family-friendly events.

“They’re the kind of thing you can bring the whole family to for a few dollars and spend the day,” he says, admitting that it usually only takes one show before you’re “hooked.”

Here are a few of the upcoming shows held at the Greater Ocala Dog Club grounds: