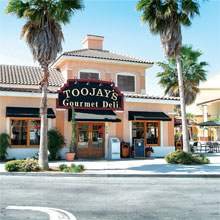 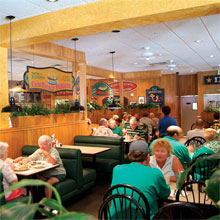 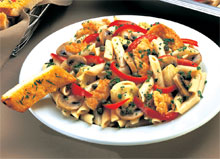 Typically, one doesn’t use the words “gourmet” and “deli” in the same sentence. However, the buzz I’d heard about TooJay’s Original Gourmet Deli in The Villages made me curious to investigate for myself, and I can safely say that in this case, the gourmet deli definitely exists.

TooJay’s was originally the creation of two friends from Palm Beach — Mark J. Katzenberg and Jay Brown — who opened their first store together in 1981. Borrowing from the “J” in both of their names, they first toyed with the name of “Two Jay’s,” and then opted for TooJay’s.

Since 1981, TooJay’s has spread across Florida, and now numbers 24 stores throughout the central and southern parts of the state.

John Vilca, general manager of TooJay’s in The Villages, notes that his store has grossed the most of any new TooJay’s since its opening in November 2004. Today, it is the second highest-grossing TooJay’s of all, second only to the bustling Palm Beach Garden’s establishment.

One visit is all it takes to see why TooJay’s is such a success. My stomach began growling the minute I walked through the front door, thanks to the incredible aromas from the bakery that greet every patron who enters.

As I soon learned, this is no accident.

“We time it perfectly so that when it starts getting busy around lunch and dinner, we’re pulling our rugalach out of the oven,” says John. “It smells so good, you have to buy some!”

This delicious pastry (available with six different fillings) is just one of many tempting creations offered daily by TooJay’s bakery. The store is cleverly designed so that you must walk past the sparkling glass cases brimming with desserts and bakery items, salads, fresh deli meats, and fish in order to meet the hostess who seats you. This gives you just enough time to start fantasizing over something special to take home.

TooJay’s has a warm-and-friendly atmosphere that recalls a family-owned neighborhood delicatessen. Well-lit and filled with an abundance of live plants, there are both booths and tables for seating. Wooden signs hang on the walls proclaiming many of the items offered on the menu in a savvy subliminal decorating tactic.

Lunch is always busy at TooJay’s and since it is served all day, you can order the piled-high, over-stuffed sandwiches, burgers, melts, salads, and homemade soups any time. TooJay’s is known for hearty sandwiches served on fresh-baked bread. Brisket, turkey, ham, corned beef, salami, liverwurst — all the traditional deli meat choices are here. The TooJay’s Classic, heaped with lean corned beef and pastrami, is one of their best sellers, notes my server Jennifer. Of course, burgers are also on the menu and each is made from eight ounces of char-broiled chopped steak.

All sandwiches are served in deli fashion with cole slaw and TooJay’s not-too-garlicky signature dill pickles. The menu boasts a dizzying variety of sandwiches, and if for some unfathomable reason what you’re hungry for isn’t listed, then order Your Creation, Your Combination and they’ll concoct the ultimate deli sandwich just the way you want it. As the menu notes, “If you can think of it, we can make it!”

There are several homemade soups available, always a good choice. I enjoyed the Matzo Ball Soup, nicely seasoned and with a generously-sized Matzo ball almost filling the cup.

If you’re in the mood for fish, TooJay’s has a number of smoked fish platters including Nova Salmon, Smoked Whitefish, Kippered Salmon, and Nova & Whitefish. Platters come with a fresh bagel, cream cheese, lettuce, tomato, onion, olives, and lemon.

Although I wasn’t planning on breakfast, at John’s urging I sampled the Potato Pancakes and quickly realized why this is a popular morning order. Thick and substantial, crunchy on the outside, yet warm and soft inside, these are the kind of potato pancakes found on a farm breakfast table.

In keeping with the times, TooJay’s offers a number of entrees that are on the healthy side. Choose from wraps and pita sandwiches to Garden Vegetable Pizza, Vegetable Lasagna, Garden Burgers, Portobello Mushroom Stack, or my choice, the Mediterranean Health Trio. This large platter comes piled with seasonal fruit, creamy hummus, freshly-made Tabouleh, and pita wedges. You’ll feel full, but not guilty, with this one.

If food-induced guilt is not a problem, you cannot pass up the Blintzes, offered in both appetizer and entrée portions. These homemade delights are filled with a delicately sweetened Ricotta cheese mixture and served with warm fruit topping on the side. After the first delicious forkful, I decided these should also be on the dessert menu.

TooJay’s has home cooking down to a science on its dinner menu. Entrée choices include Old Fashioned Pot Roast, TooJay’s Shepherd’s Pie, Garlic Chicken Pasta, Salmon Cakes, Mom’s Meatloaf, Traditional Turkey Dinner, Chicken A La TooJay’s, and Stuffed Cabbage. Throughout the menu, you’ll find items marked with a symbol denoting that this is a TooJay’s specialty. Any of these can be ordered with confidence, as their popularity has been proven.

If you’re like me, you’ve had dessert in mind ever since the heady aroma of freshly baked sweets hit you when you walked through the door. On a friend’s recommendation, I had to try the Banana Dream cake, which Jennifer added is the restaurant’s most popular dessert.

Anyone who knows me will affirm that I am not, as a rule, intimidated by desserts. TooJay’s, however, is another story! The slices of cake here are huge — and I am not exaggerating.

“Most people don’t finish one and usually order it to share,” admits Jennifer.

Undaunted, I dug into the three-layer banana cake with chocolate chips and walnuts, separated by layers of dense banana cream, all topped with milk chocolate icing. The cake won! I don’t see how anyone who’s polished off lunch or dinner can possibly eat an entire slice on their own. Still, it’s fun to try!

Chocoholics will find solace in the flourless Killer Cake, one of TooJay’s most requested desserts made from four different kinds of chocolate.

My favorite, I have to confess, was the simple-yet-very-satisfying Rice Pudding. Served warm, minus raisins and sprinkled lightly with cinnamon, a dish of this is the ultimate comfort food. It tastes just like Grandma’s, or perhaps even better.

On my visit, I noticed patrons ranging from kindergarten to retirement age. That’s understandable, since TooJay’s has a menu that readily accommodates anyone hungry for good deli food and hearty home cooking.

TooJay’s has two restaurants in The Villages area — the one on Delmar Drive situated right the square next to the sales center and the newly opened store at Lake Sumter Landing. At either option you will find an abundance of shops within walking distance, making TooJay’s the perfect spot for breakfast, lunch, or dinner.