More than 2,500 Marion County Public Schools students who graduated last month have a big decision to make: attend a four-year university like many of their parents did, and come out with tens of thousands of dollars in student loan debt; or learn a skilled trade that would allow them to get to work a few years sooner, making a good salary, with no student loans. For more and more young people and their parents, choosing a skilled trade occupation is a no-brainer.

Nationally, the construction industry is experiencing a labor shortage. At the start of 2018, there were 250,000 more construction jobs available than there were workers to fill them, according to the National Association of Home Builders (NAHB). Right here in Marion County, a search for open construction jobs netted 748 openings, ranging from laborers and managers to superintendents. During the recession a decade ago, the construction industry lost a solid 1.5 million workers, and demand still exceeds supply—especially for skilled trades. This is especially true for the metropolitan Ocala area where the growth rate in construction and related industries is higher than the state average—6.5 percent versus 3.8 percent respectively. Growth in the Ocala Metro area is outpacing larger cities, including Jacksonville and Orlando. And those jobs that make that growth possible are being left unfilled. 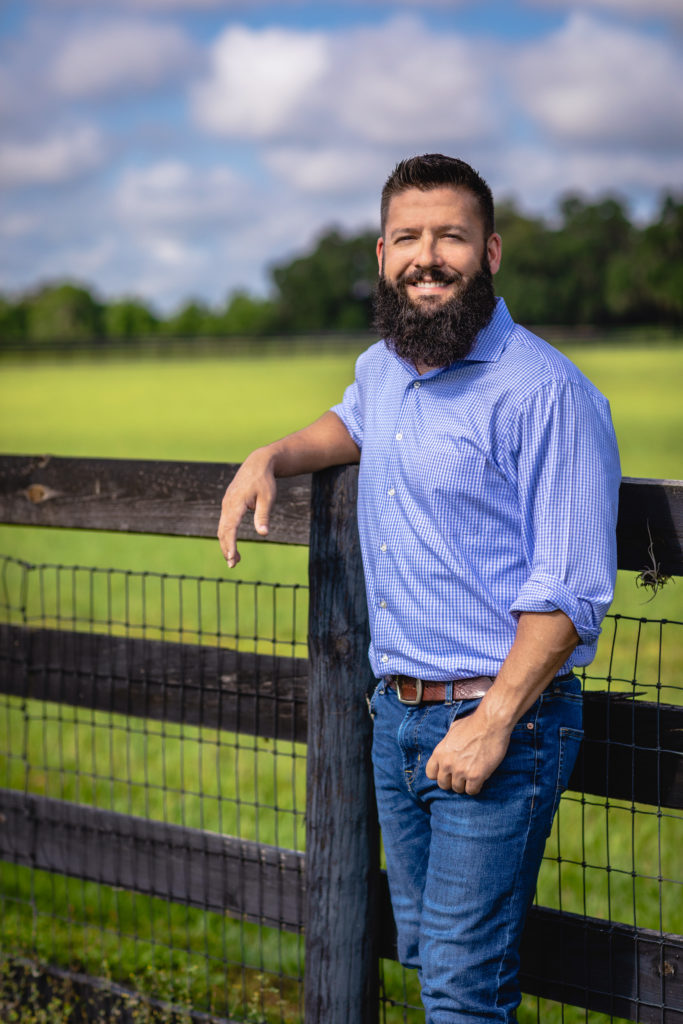 “We are seeing the effects of pushing kids toward college and away from trades, hands-on skills and starting a career out of high school. High schools have done away with shop class, probably about the same time they did away with home economics. We’re seeing the repercussions of that now in the workforce,” observes Scott Olschewske, president of the Marion County Building Industry Association (MCBIA), a professional not-for-profit trade organization dedicated to the betterment of the construction industry and the community.

“Today, the average age of contractors is in the mid to upper 40s,” says Olschewske. “There is no one to replenish the skilled trades and it’s only going to get worse.”

As a licensed Florida contractor and owner of Keystone Construction, Olschewske knows firsthand the challenge of trying to find enough good labor.

“The construction industry is big here; there are over 1,100 construction businesses based in Marion County,” he notes. “When the last housing bubble burst around 2008, a lot of builders were left with foreclosures, but all of those houses have been bought up now. When there’s nothing left to buy is when you see a spike in new construction. We’re going to continue seeing this deficit for at least the next two years, which is good for the county, but we’re playing catch-up now.”

Catching up with demand requires skilled labor, and when those workers aren’t available, the ramifications are felt by both builders and homeowners.

“When the labor force is diminished, subcontractors can’t do all the work, so they pick and choose the jobs they want,” explains Olschewske. “Right now everyone wants to do new construction, so it’s hard to find someone to do remodels and renovations, which makes it tough on the consumer.”

Back in the 1960s, half of the U.S. workforce was in the skilled trades, according to U.S. Bureau of Labor Statistics.

Just 40 years later, for every five tradesmen who retired in 2008 only one new person entered the field. And a 2009 survey revealed that only a paltry 6 percent of high school students even considered a job in the trades.

This undervaluing of trade skills left a significant void in the construction industry. With the current robust economy and housing market, the need for workers is strong—and demand is only going to continue.

A 2017 study from the Georgetown University Center on Education and the Workforce focused on good-paying jobs that don’t require a bachelor’s or four-year undergraduate degree. Researchers reported that Florida was among the top three states with the largest gains in jobs in “non-manufacturing blue-collar industries, such as construction” from 1991-2015.

And those workers weren’t all male.

“We are seeing more women out in the field, and we welcome them in the trades. A lot of our painters, trim carpenters, flooring installers and sheetrock hangers are women,” says Olschewske.

Employment in construction and related occupations—think carpenters, electricians, plumbers, masons, painters, drywall installers, tile and marble setters, flooring installers, sheet metal workers, etc.—is expected to grow 11 percent from 2016 to 2026, reports the Bureau of Labor Statistics. This projection for growth is faster than the average for all occupations and should result in about 747,600 new jobs.

This means prime pay for employees able to fill those openings. But where are they going to come from?

Learn While You Earn

Although you can go to college to become a lawyer, teacher, engineer—and a host of other occupations—there’s really no college course to teach someone how to become an electrician, mason, carpenter, plumber or HVAC technician. To master a skilled trade you don’t need a four-year degree, but you do need work experience, on-the-job training and a formal vocational education. This is when apprenticeship programs come into play.

Thanks to the efforts of multiple local agencies, working adults and high school students have the opportunity to learn skills that will allow them to establish lasting careers.

The Georgetown University study mentioned earlier found that 3,477,000 people have good-paying construction jobs in the U.S. and earn a median salary of $59,000. 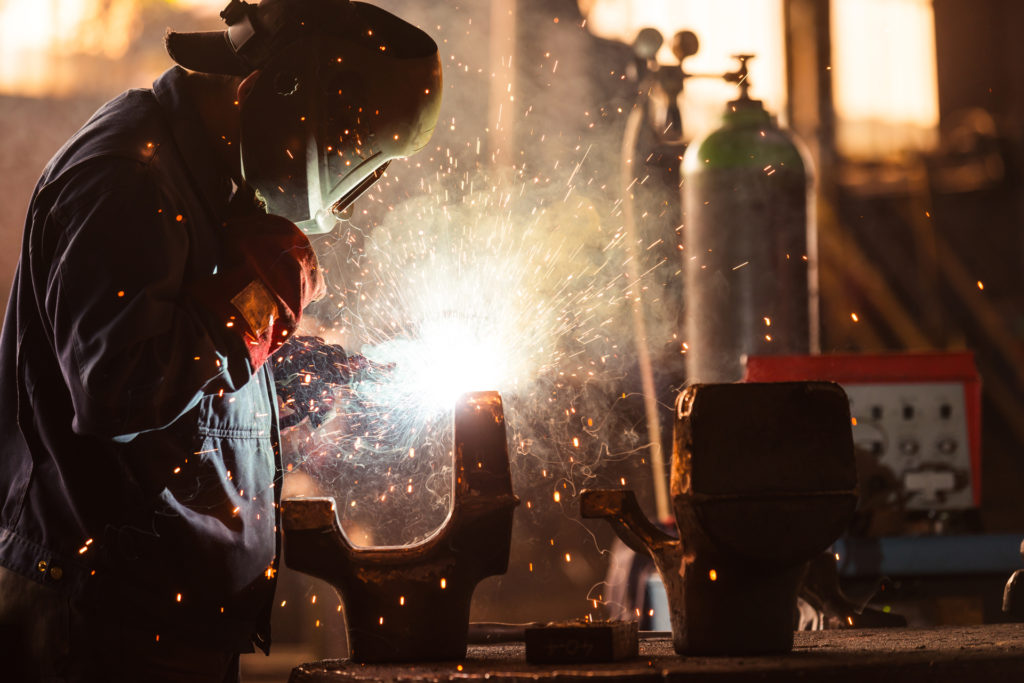 It’s important to realize these are jobs that don’t require someone to borrow money to attend school for several years and enter the workforce carrying thousands of dollars in student loan debt.

Students in Florida have an average student loan debt of $24,461—significantly lower than many other states—but they’re still starting out “in the red.”

“College is not for everyone and isn’t the only smart path to take. With an apprenticeship program, not only are you earning a great wage, but you’re learning a skill that can take you anywhere in the country. It really opens doors to making a great living. You could be 21 years old and making over $23 an hour with no student loan debt,” says Olschewske, whose own brother left the medical field and became an electrician.

“Our overall mission at CTE is to be part of the economic solution here in our community. As educators, we’re listening to the business community, hearing what their needs are and building programs to meet those needs. We want to have a talent pipeline to help meet the workforce and economic development needs of our community,” says Mark Vianello, executive director at Marion County Career Technical Education (CTE).

“There’s a tremendous need for skilled individuals in the trades. Marion Technical College (MTC) has had an electrical apprenticeship program for 25 years, but there’s also a need for plumbers, HVAC technicians, carpenters and masons. In response we’re building an Apprenticeship Academy that addresses all those areas at the post-secondary level, and also building a pre-apprenticeship program at the secondary (high school) level,” says Vianello.

Marion Technical Institute (MTI) is offering a Construction Technologies Program to students at every high school in Marion County, and is also providing transportation. This pre-apprenticeship program will allow students to enroll in the Apprenticeship Academy already having up to one year of the program completed. The masonry program is scheduled to open this spring and carpentry this fall.

The goal this summer is to focus on development of the West Bay building at MTC to combine the current electrical apprenticeship with masonry and carpentry programs and the soon-to-come programs of plumbing and HVAC/mechanical, creating a well-rounded Apprenticeship Academy in one location.

The Florida Legislature has already passed bills allowing students to use apprenticeship training towards high school and/or college credits. Other bills are pending that will help address the critical lack of a skilled construction workforce. 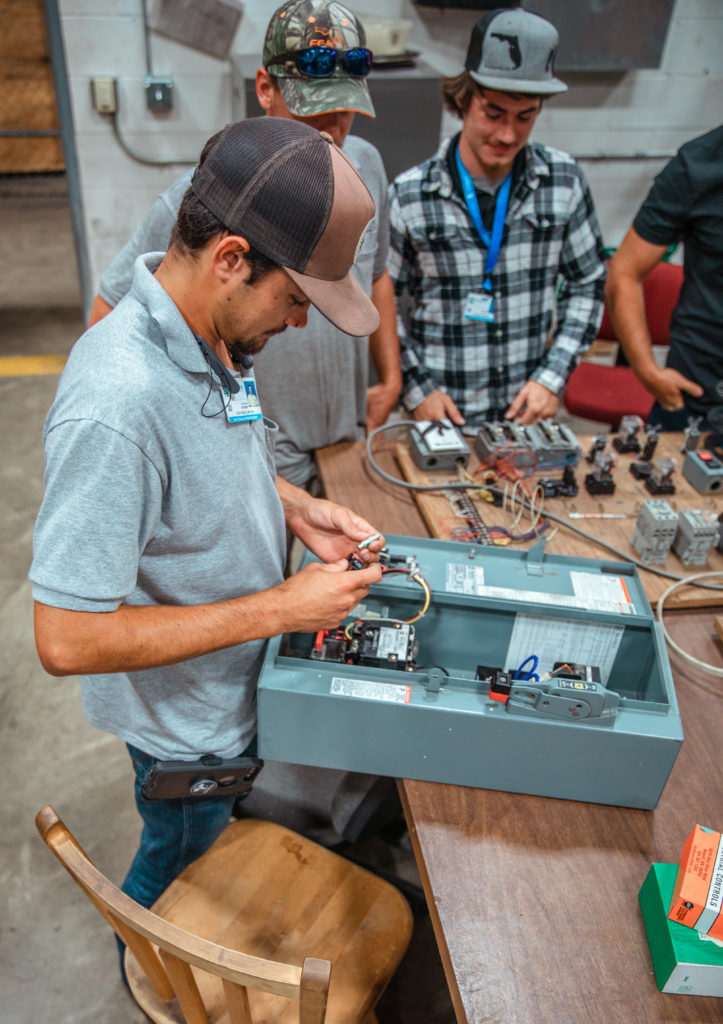 “These programs give students the opportunity not only to learn on the job, but to learn the technical aspect in the classroom; it’s so important to understand what you’re doing and be able to perform it,” notes Earl Scott, career education facilitator at MTC, who coordinates with the program sponsor, Florida Electrical Association, to oversee the electrical apprenticeship, in which 52 students are currently enrolled.

The electrical apprenticeship program at MTC is a four-year program. Students are required by the state to work 2,000 hours a year and be in class for a minimum of 144 hours per year, but the MTC program averages about 168 hours a year. Students attend classes two nights a week where they have classroom learning, as well as hands-on time in the campus lab. All instructors are master electricians.

Typically, students only pay for textbooks because the cost of the program is shouldered by the state and the employer, which acts as a “sponsor.”

“The MCBIA is bringing our industry of tradesmen—and women—together to make sure we are using real world training, offering competitive wages industry-wide, and creating careers, not just jobs,” says Olschewske. “A lot of puzzle pieces are coming together throughout Marion County to solve a common problem: lack of a skilled labor force.”