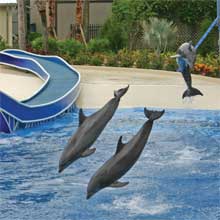 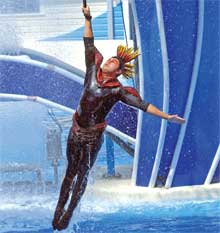 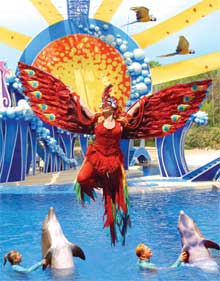 WANTED: Aerialists and high divers for theatrical outdoor show. Must be able to perform in front of large crowds several times daily. Those with fear of heights or aversion to cold sea water need not apply. Must be willing to share the stage with dolphins, whales, and exotic birds. Enthusiasm a must!

Had the above ad run in a performing arts publication, no doubt it would have raised curiosity and generated a flood of applications by intrigued performers.

To the delight of SeaWorld Orlando visitors, a dramatic new theatrical show debuted on Memorial Day weekend, and credit is certainly due the creators, trainers, and performing cast of “Blue Horizons.”

“It really is a revolutionary show; there’s nothing else like it,” says Kelly Flaherty Clark, Assistant Curator for Animal Training at SeaWorld Orlando, who also stars in the production as “Marina.”

“As a trainer, it’s been an incredible ride,” Kelly remarks. “Pretty much everything we dreamed up, we’ve found a way to make it happen. It’s been magical, right down to the audience response, and the show is getting better every day.”

The idea for the totally new theatrical show began as a corporate project over two years ago, and the production team came together a few months later.

Stanley Meyer, best known for his design work on the acclaimed Broadway musical, Beauty and the Beast, served as set designer and show consultant for “Blue Horizons.” Meyer created the theatrical set to represent the elements of both sky and sea. Renowned costume designer, Tracy Christensen, known for her work on such productions as Fiddler on the Roof and Beauty and the Beast, developed the elaborate wardrobe.

Blue Horizons invites the audience to step into a young girl’s vivid imagination. From the first stirring moments — as the music swells and a mysterious fog swirls above the pool until the impressive finale — there is never a slow moment in the nearly 30-minute performance. The show is a true panorama of colorful, non-stop entertainment, both in the water and above.

Punctuated by towering framework and clouds of blue bubbles, the stage is set for a dramatic show even before the opening music begins. The original musical score was performed by the Seattle Symphony Orchestra.

Dolphins and whales are to be expected in a SeaWorld show, but the creators of this performance didn’t stop with water mammals. A remarkable cast of aerialists, divers, animal and bird trainers, Atlantic bottlenose dolphins, and false killer whales bring the show to life. Rainbow-colored birds — including macaws, sun conures, and Andean condors — swoop over the audience at appropriate moments, startling in both their sudden appearance and majestic presence.

“This is unlike anything we’ve ever done at SeaWorld before,” Kelly explains, “as far as the amount of labor dedicated to this show.”

In addition to the nine Atlantic bottlenose dolphins, two false killer whales, a variety of birds, seven animal trainers, two bird trainers, and nine aerialists and divers, a technical crew is necessary to pull off the show. Bungees and swings enable the aerialists and divers to soar above the water and plunge into it, as well as be propelled out of the pool. A number of the human performers were hired specifically for this show and this is their only performance venue at SeaWorld.

“What’s totally different about this show from the dolphins’ perspective is that the human beings — the divers and aerialists — are actually the ‘circus performers,’” says Kelly. “We’ve had to make our training signals much more subtle. Our roles as trainers are much more theatrical than we’ve ever done before, and the dolphins’ roles are much more natural.”

The human participants aren’t the only ones excited to be part of the show. True, dolphins tend to look like they’re smiling most of the time, but this group genuinely appears delighted to participate in the show. Indeed, they are never forced or urged to leave the back pools behind the scenes to go out to the front pool and perform. They are part of each show only because they choose to be.

“The animals are not forced,” Kelly notes. “They love to be out there and they love performing. They get excited about performing; they jump higher and spin longer.”

Interestingly, eight of the nine dolphins in “Blue Horizons” were actually born at SeaWorld. Kelly explains that SeaWorld has not taken any killer whales or bottlenose dolphins from the wild in well over 20 years.

“About 70 percent of the animals you see in our parks were born in our parks,” she notes. “This is a credit to our breeding program. One of the best ways to judge if any animal is content in their environment is if they’re willing to breed. You can visit our dolphin nursery and there are always at least one or two little ones there.”

In the wild, if there are no compromising conditions, dolphins may live to be 30 to 35 years old. Kelly says that dolphins over 40 years old can be found in the care of man.

In “Blue Horizons,” the youngest dolphin performer is seven years old and the oldest is almost thirty.

“He’s not showing any signs of slowing down,” says Kelly of the senior dolphin. “He’s one of our most energetic performers.”

Crowd response to the new show has been fantastic, she adds.

“People walk in expecting to see dolphins jumping, but instead they find an incredible scene and musical score. They’re leaving inspired and that’s what we wanted to do.”

Intending to be a vet student at Ohio State University, Kelly’s career path forever changed during a casual trip to SeaWorld nearly two decades ago. Awed by the shows that day, she had a revelation that training marine animals was what she wanted to do instead of practicing veterinary medicine.

Kelly graduated from Ohio State in 1987 with a degree in animal science and has been with SeaWorld for almost 19 years now. Her primary responsibilities include overseeing the training and daily care of the entire cast of dolphins, whales, and birds at Dolphin Theater. Kelly has also trained and performed with otters and killer whales.

“I was lucky to get the best job in the world.”