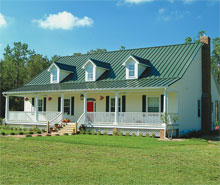 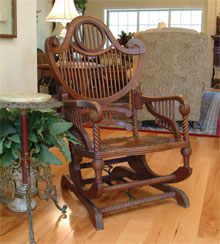 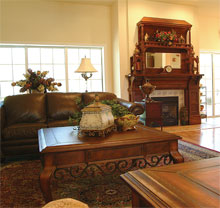 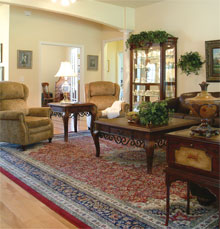 Historically, slaves in the southern United States were usually very superstitious, often painting the porch ceilings of their quarters a soft, pale blue. This color, which would become known as Haint-blue, was thought to drive away any evil spirits that may be lurking around the home and family.

“As a matter of fact, historically, that’s why a baby boy’s room color is traditionally pale blue,” Angela White says. “Because the parents were concerned about evil spirits entering their child. Obviously, they weren’t as concerned for their daughters,” she adds with a smile.

It’s an idea and custom that wasn’t lost on the White family of Summerfield.

History has always sparked an interest in both Angela and her husband of seven years, Lee White. The couple honeymooned in Charleston, South Carolina, where they gathered ideas for the home they were beginning to design. They knew they wanted to build an historically accurate home.

“We searched for a traditional, old home to move into and couldn’t find one,” Angela says, “so we decided to build our own ‘old’ home.”

When it came time to select the perfect location for their home, there was no question about the correct answer.

“My family has been in the Summerfield area since the 1840s,” Lee says. “My parents currently live in my childhood home, which coincidentally, is directly across the street from us.”

Lee continues to work in the family business, managing the La-Z-Boy Furniture Gallery for his father, who also owns White’s Furniture near The Villages.

While the Whites’ home itself is beautiful, its most intriguing aspect is the abundance of history that fills it — despite being brand new.

Walking up to the 10-foot front porch (of course with Haint-blue ceilings), visitors take special notice of the red brick walkway that Angela herself laid over a course of two weeks.

“We ran out of brick,” she says with a laugh. “We’re planning on continuing the walkway and making a circular drive.”

The idea for the massive, curved banisters that lead to the expansive front porch, where the Whites are often found rocking in their southern-style plantation rockers, was borrowed from a home they saw on a trip through Mobile, Alabama.

“Later we learned that house belonged to the mayor of Mobile,” Lee says. “The front porch area was very important. We included a working gas light as our porch light and we painted the door a welcoming brick red.”

Recently, during both hurricanes Frances and Jeanne, the Whites sat on their deep porch, marveling at Mother Nature’s strength.

As if I wasn’t already impressed by the grandeur of the front porch, the real history lesson began when I enter the Whites’ front door. Just to the left in the front foyer is a massive curio cabinet that proudly displays hundreds of years of family history and heirlooms. Tiny white cards explain to visitors the significance of the items and photographs on display.

“A lot of people’s family heritage ends up getting lost over time, thrown out, or sold at yard sales,” Angela says. “We built this home to showcase our family heritage and keep it alive.”

A pair of ancient-looking baby clothes are neatly displayed on the bottom shelf, complete with stains and wear and tear. The sign reads, “Baby Clothes from Papa Clyburn.”

After a quick history lesson from Lee, I learned that Papa Clyburn, Lee’s great uncle (real name: Richard L. Clyburn), was born in 1869 and died on January 1, 1957. He was a minister and one of the co-founders of Pedro Baptist Church.

Other items displayed include silver spoons, a bell to what was once the National Colony House (a hotel in Summerfield that was run by the family), and newspaper clippings from as far back as the late-1800s.

Just on my right was a hat stand that featured several hats and two pairs of stuffed, lace-up, heeled boots (that looked very uncomfortable) worn by Nellie Adkins (1893-1992), their great aunt. The Whites believe Nellie used these items from 1920 to 1940.

One of the Whites prized possessions is their George Hunzinger rocker that once belonged to Nellie. Hunzinger, who is the father of the folding chair, was best known for his quirky designs and unique furniture stylings. He built furniture from 1865 to 1895 and died of a sudden stomach ailment in 1898.

The deep seat and spiraled legs and arms make the chair quite a conversation piece.

“We get a lot of comments on this chair,” Angela says. “It’s very unique and rare. I think we’re lucky to have it.”

The Whites’ library houses hundreds of rare and hard-to-find books, including a complete set of Teddy Roosevelt’s writings, and an extremely early copy of Marjorie Kinnan Rawling’s classic, Cross Creek.

The washstand in 17-year-old Amanda’s room, along with the writing desk in the living room, came from the National Colony House. The Whites have two other children, seven-year-old Gracie, and 14-year-old Christopher.

“When I was a kid, I used to sit at this desk and do my homework,” Lee says. “It was used as the front desk where people would check into the hotel.”

Moving towards the sweeping kitchen, with its maple cabinetry and green granite countertops, Angela is excited to share what she considers her biggest find when searching for the perfect pieces for the home.

“This is by far my best accomplishment for the house,” she says as she points to the beautifully detailed fireplace surround. “I found this at a yard sale in Orange Lake. I loved it so much I dragged Lee up there to see it. At the time, it was very black and dirty and Lee wasn’t sure about it. In the end I bought it for just $700. When a friend of ours from the furniture store saw it, he said we got it for a steal.”

The house the fireplace surround came from still stands in Citra. The Whites learned the piece was created in Marion County by a company that went out of business in 1860. The nails holding the piece together were handmade and cut and can be seen from behind. The original mirror was resilvered in St. Petersburg and rests on top. Today, the black walnut piece fits perfectly in the Whites’ home and adds a feeling of warmth to the decor.

In historical times, it was common for families to name their home, giving it a personality and attitude all its own. After much consideration, the Whites chose White Rose Plantation.

“We took both of our last names,” Angela says. “My maiden name is DeRose. We registered the name with the American Home Registry and we plan to add it to the deed of the house so this home will always be known as the White Rose Plantation.”

As a matter of fact, White Rose Plantation’s Haint-blue porches, along with the history preserved inside, has grabbed the attention of several national publications including Southern Living. Writers and photographers from the magazine plan to visit with the Whites in the coming months so they can share one of Summerfield’s best-kept secrets with the rest of the country.