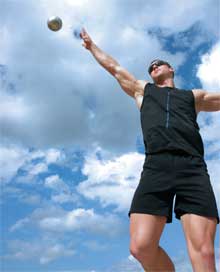 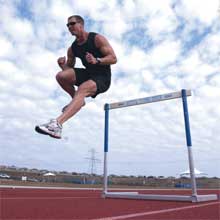 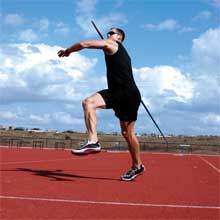 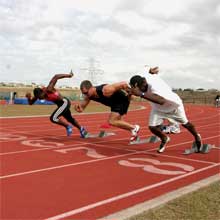 Jason Richards has big goals. In the year 2008, he hopes to be in Beijing competing in the decathlon at the summer Olympic Games.

But his goals are realistic. A former Scottish Highland Games (a strongman contest) competitor, Jason is in the best shape of his life. And good thing, too, because he has a lot of strenuous training ahead of him.

“I had only tried three of the 10 decathlon events,” Jason says, “but it didn’t discourage me. I’m always looking for a challenge.”

After reaching the top of the amateur ladder in the Scottish Highland games, Jason decided family came first. Jason and his wife of three years, Heather, have a two-year-old daughter, Olivia, and are expecting their second child, a boy, in April.

Even though Jason is a family man in heart and spirit, competition is still in his blood. Heather, his biggest supporter, encouraged him to follow his dreams.

“Since I was a young boy, I’ve enjoyed competing in every type of sport available,” Jason says. “Because my goal was to better myself each time I competed, I’ve always been able to excel.”

After watching Tom Pompas and Brian Clay compete in the decathlon during the 2004 Olympic Games, Jason came to a conclusion.

He hasn’t looked back since.

Jason describes the decathlon as a mind-over-body series of events. After endless research concerning decathlon events and training facilities, Jason says everything fell into place for him. He quickly secured three supportive coaches at the Olympic Triathlon Training Center in Clermont including Dennis Mitchell, “The World’s Fastest Man” at one time.

So what’s a typical day like for this Olympic hopeful?

After less than a year of training, the physical difference is astonishing. Jason, at 6-feet, 2-inches tall, has gone from 220 pounds to a slim, toned 195 pounds. Currently, Jason is training four days a week because that’s all his finances will allow. He’s hoping to secure sponsors to take over his living and training expenses, which exceed $125,000 a year, allowing him to concentrate on training full-time, especially in the events where improvements are needed.

The Scottish Highland games have given Jason tremendous upper-body strength and stamina, an edge in the shotput, discus, and javelin. The latter is his favorite decathlon event.

Jason admits that he’s not a distance runner, but he’s getting stronger. He recently ran the 400-meter in 57 seconds. His goal this season is to get that number down to a mere 50 seconds.

“The 1500, which is just under a mile, is going to be a mind-over-body run for me,” Jason acknowledges. “Even though the 1500 is a distance run, the decathletes are completing it like a sprint. I like a challenge, though. If I could get into the top three amateurs in the Highland Games without a coach, I feel like I should be able to accomplish my goals and make it to the Olympics.”

This March, Jason will finally be able to compete in his first full decathlon.

“That will be the true test,” Jason says. “I’ll begin plugging myself into meets throughout Florida, seeing how I stack up against the competition.”

Only time will tell, but if Jason’s determination is any indication, we’ll be cheering him on as he takes on top athletes from other countries in 2008.

How exactly do you say “determination” in Chinese?