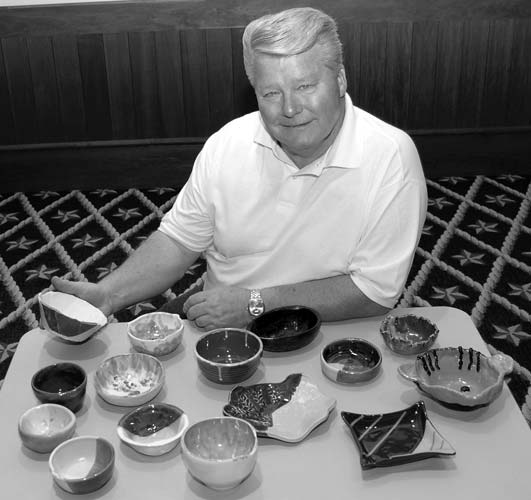 Throughout history, potters have filled a universal need for earthenware while creating masterful works of art. Larry Phillips of The Villages saw a way that present-day potters could use their clay creations to feed the hungry.

The first Empty Bowls Event in The Villages was the brainchild of Phillips, founder and president of the Potters of Lake Miona. In the spring of 2008, a member suggested they do something together as a club. After all, they had a wealth of unused pottery bowls at their disposal.

“I remembered that I had contributed some of my own pottery to an Empty Bowls event in Port Charlotte years ago,” says Larry. “It seemed like the idea could work here, too.”

Potters, clayers, and glass fusion clubs in The Villages, as well as the public, created 1,200 bowls that were given to attendees who paid $10 each and stood in a soup line to support the Empty Bowls campaign. The crowd went through 50 gallons of soup and six cases of lettuce in one afternoon, and every attendee went home with a one-of-a-kind bowl and a fact sheet about hunger in America.

“Larry took the idea from inception to completion and did it out of the goodness of his heart,” says Cheryl Hershberger, director of the Christian Food Pantry in Lady Lake. “If it weren’t for people like him, we wouldn’t have this pantry.”

The Christian Food Pantry and Operation Homebound, which provides meals to shut-ins, were the beneficiaries of the more than $10,000 the Empty Bowls event brought in.

“When the club decided on the idea, someone asked how much money could we raise,” Larry says. “Foolishly, I said $10,000, not realizing at the moment how many bowls that would take.”

In the beginning, Larry sought sponsors for the event, and the club began inviting the public to make bowls. Soon, other crafty groups joined in the fun, and by mid-summer it was clear that there would be no shortage of bowls.

Art club members and
the public alike
created 1,200 bowls
for the first
Empty Bowls Event
in The Villages.

With seed money from Abundant Life Ministries, Larry was able to buy the pottery supplies for the volunteer bowl-makers. He sought food sponsors, too, who had to take his word that the event would indeed work. Most of the folks he approached wanted to have some kind of guarantee that the Empty Bowls event would be successful.

“We may not have a track record yet, but now we at least have footprints in the sand,” Larry says about the first event’s overwhelming success.

Fred Marlin, manager of The Villages Sweetbay Supermarket, generously supplied ingredients for the meals that were served.

“Our fervent wish is that someday there will be no need for food pantries and soup kitchens,” says Fred, “but in the meantime we were proud to be able to support Larry and the Empty Bowls event.”

Finding sponsors was not the biggest challenge however, according to Larry. Teaching people who had never worked with clay to make bowls was. Most succeeded, and subsequently the various clubs wound up with many new members.

Giving back to the community is something Larry does naturally. He thinks it comes from growing up in a family of eight in a three-bedroom apartment in Queens, New York.

“We didn’t have a lot, but we were taught to share what we did have,” he says.

As a Boy Scout, Larry made some coffee mugs but didn’t get into pottery until many years later. He was attending “Tres Dias,” a Christian retreat on Long Island, when he decided to make 64 ceramic communion cups. The project rekindled his interest, and Larry signed up for pottery classes at a New Jersey community college shortly after his retirement from New York’s Daily News, where he worked as a printer.

When he and his wife, Veronica, moved to the Village of Liberty Park nearly three years ago, Larry found a Clayers Club at the Laurel Manor Recreation Center bursting at the seams with members. He volunteered to start another club at the newest recreation center south of Highway 466, and the Potters of Lake Miona was born. While Larry was busy with pottery, Veronica was starting the glass fusion club.

Planning the Empty Bowls event kept Larry too busy to think much about his own pottery creations. For the next few months, however, he’ll be back in the studio working on a project near to his heart—an intricate boots and helmet sculpture in honor of paratroopers from all wars. A Special Forces veteran himself, Larry plans to give it to a local military organization on Veterans Day.

With a twinkle in his bright blue eyes, Larry already has the next Empty Bowls event on his mind. He believes in dreaming big and setting high goals.

“We want to hold the next event earlier in the year when more people are around,” he says. “I can only imagine what it will be like when the snowbirds are back.”