Two men’s groups are using their collective pasts as a prologue for a new generation of Black boys through male mentorship.

Kut Different Inc. and Ambitious Boys Becoming Ambitious Men meet weekly in Ocala to mentor young boys. But these are not daycare centers, and the lead organizers, Jamie Gilmore Jr., and Brett Stanley, respectively, are not babysitters. They are the change.

According to the 2018 estimates from the U.S. Census Bureau, the Black male population was 20 million. With regard to higher education, only 13 percent of Black men have gone on to earn bachelor’s degrees. Something troublesome happens from boyhood to manhood.

Alex Haley, famed author of Roots: The Saga of an American Family—possibly the most significant historical fiction ever told by and about Black people—stated, “Tying the little folks with the older folks is a great and powerful tool to preserve and to protect the family and the individual.”

Mentorship is not a novel idea. However, what the handlers of these “tools” deliver is unique. 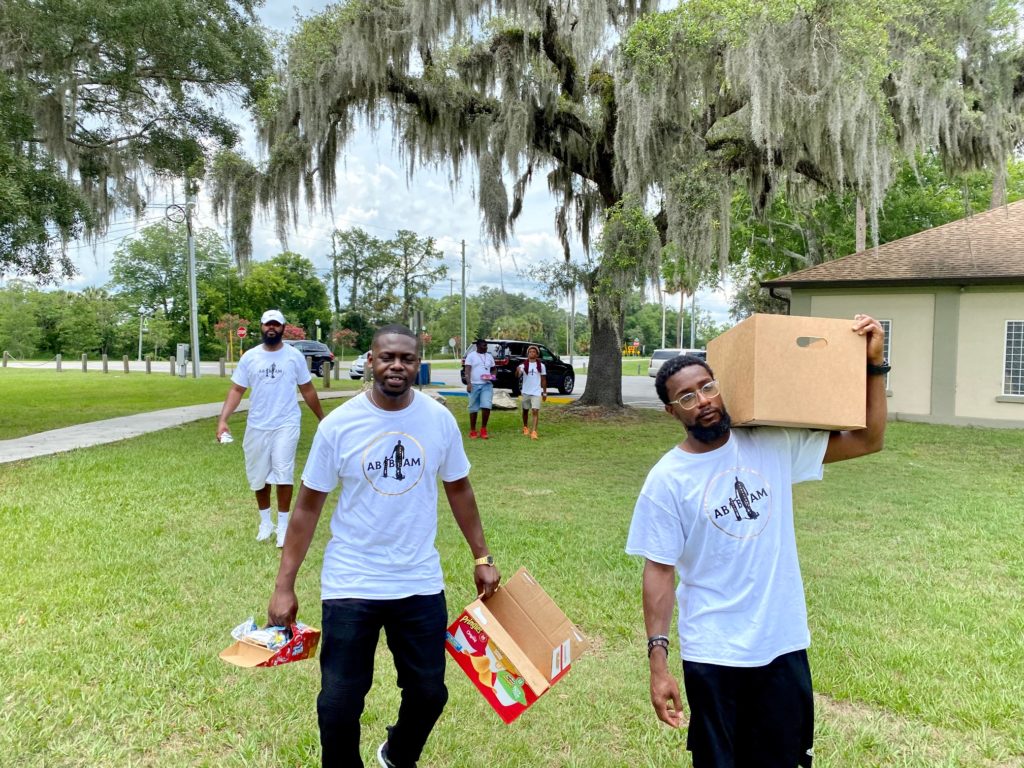 On the Saturday before Thanksgiving, when we speak, Brett Stanley, 31, has already prepared and served dinners to the needy and is planning to donate 15 turkeys the following week. 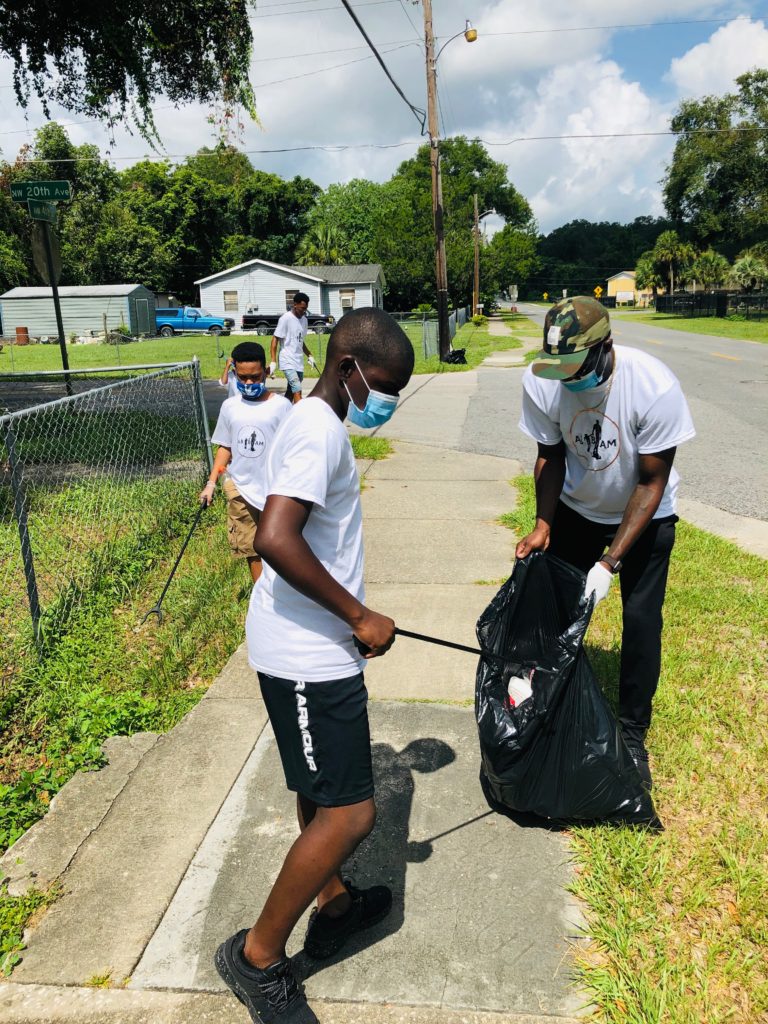 After graduating from Vanguard High School, Stanley left for Tallahassee in 2010. With smarts and drive—15 credits shy of receiving his bachelor’s degree from Florida A&M University—he utilized his temporary certificate to teach mathematics and honors geometry at Governors Charter Academy. In his first year, Stanley became Teacher of the Year.

Unwilling to rest on one strength, he began coaching more than 200 kids in the academy’s football and soccer programs. Stanley mentored them for six years until an emergency led him back home, in 2020, to care for his mother. He says he brought his mentorship prowess with him. And after gaining employment at an alternative school, he and his brother, Glen Stanley, created ABBAM.

Brett Stanley’s passion for mentoring stems from his childhood struggles. When he was 15, his stepdad passed away. Times were tough, but Stanley says he “never missed a meal or a Christmas.” He credits his “super” mom for stepping into his dad’s shoes to raise three children.

Still, there were things he needed to learn from other men. Coaches and mentors filled the gaps. Now he pays it forward to 25 boys, or rather “young kings” as they are called.

Stanley boasts about his “all-star team of mentors.” Their slogan is “Using our path as a guidance to your future.” Together they link up with mentees of like interests.

ABBAM has a mantra, too. Before each activity, the mentors recite: “Our ultimate goal is to move in a manner of being proactive, preparing our kings for soon to be real-life events so that once they are placed in the situation, they will shine and do their absolute best.” 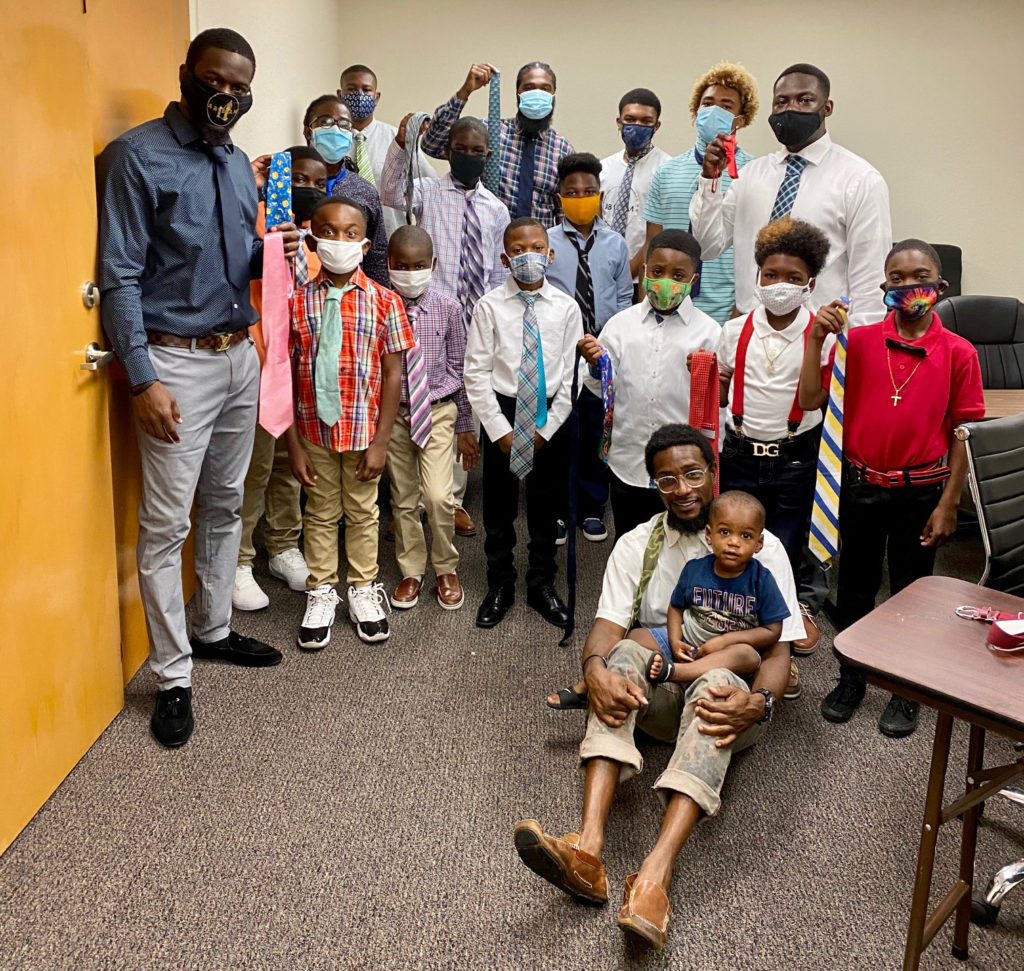 Recently the boys learned how to tie a necktie. Stanley describes it as “simple things that maybe you missed if you don’t have a father in the home.” He adds, “Boys need to learn that perception plays such a pivotal role in success.”

One of the mentors, John Collins, a Resource Project Manager at Lockheed Martin with multiple master’s degrees, describes ABBAM as “a big family.” During a Black Tie Ball, he recalls tasking the young men with telling an audience of 100 about the organization. Collins says, “Articulating clearly under pressure and testing their ability to adapt is important.”

Evidently, the mentees rose to the challenge because the result was resounding applause.

ABBAM plans to have more events and to grant more scholarships to high school seniors accepted into college. This year they awarded two. They also hosted “Fun in the Sun,” where the mentees camped, played kickball and participated in team-building exercises.

When John Collins’ son, John Robert Collins III, is asked about the group, the 12-year-old “king” responds, “I love it. I get to play and help others.” He says he helps the younger boys tie their shoelaces and teaches them games.

It’s not all pomp and programs, though. The students, ages five to 17, perform community restoration projects and must abide by the group’s motto—“Go M.A.D.”

“It means to go Make a Difference in the community,” Mr. Collins explains. The former North Marion High School (NMHS) athlete admits he uses the same gridiron philosophy in life. “So many people need help and there are many opportunities to make a play and ‘go M.A.D.’” 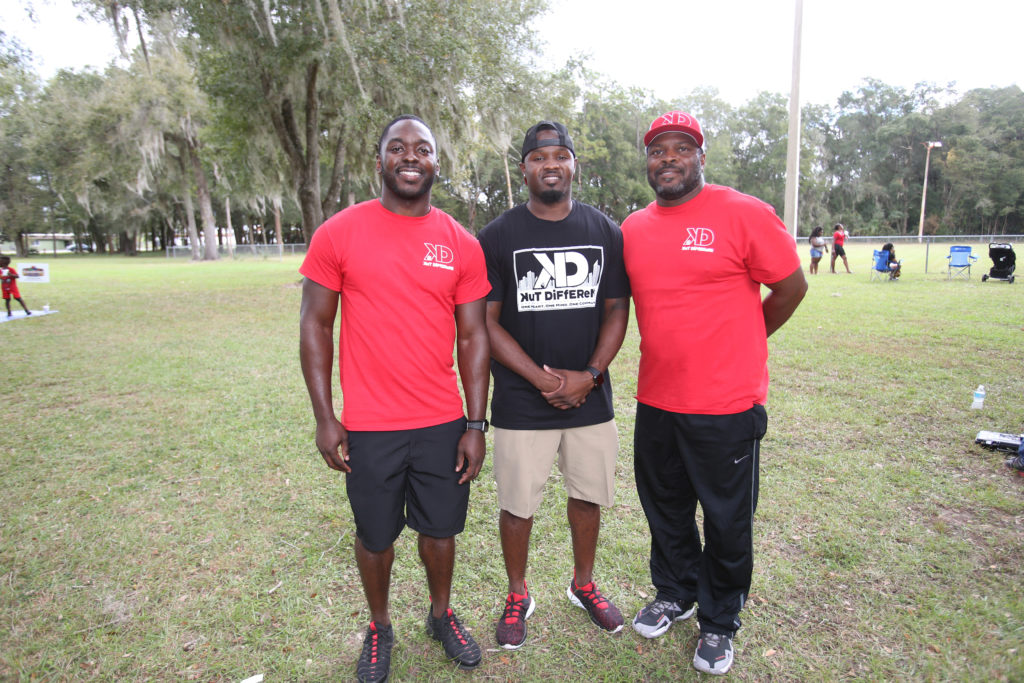 Twenty-seven-year-old NMHS graduate Jamie Gilmore Jr. says he “was looking to play sports or own a team” when life happened. Already a successful student-athlete with a bachelor’s degree from Temple University and a master’s degree in sports management from Western Illinois University, Gilmore felt confident about his trajectory until an advisory position with the Black Male Achievement Network opened his eyes.

Gilmore thought the group of non-athletes would be a network of nerds. Instead, he became the student, learning a lesson in camaraderie with vulnerability. He acknowledges never witnessing this inside the sports world.

Little did he know an interruption in his Ph.D. pursuits would prove purposeful. After eight years away, Gilmore felt God leading him back to Ocala. 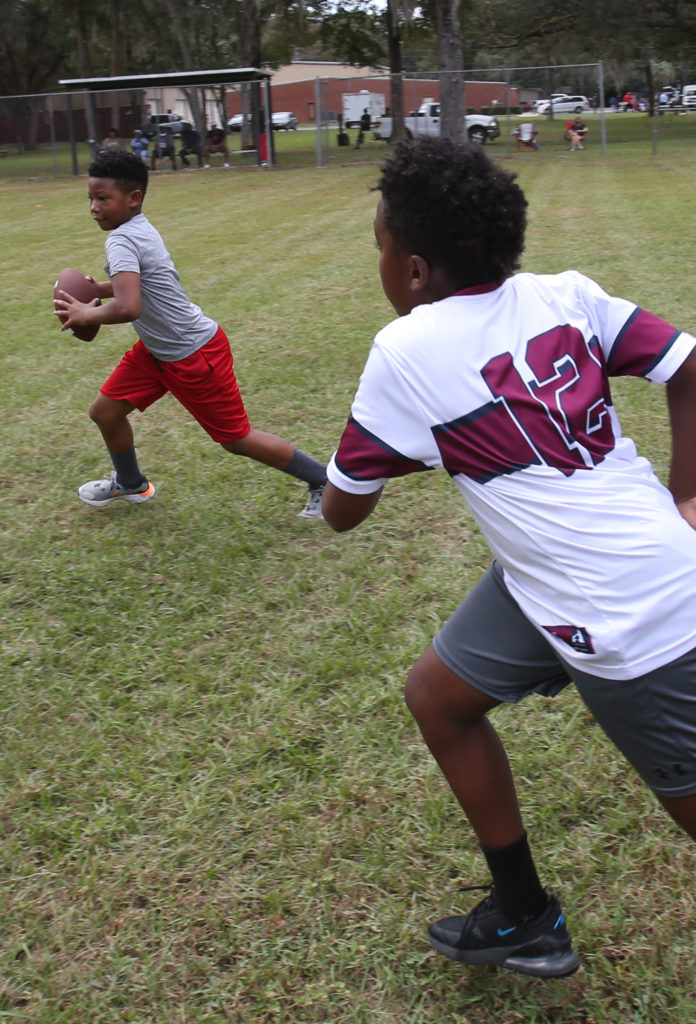 So, in 2019, he returned with plans to spend some time in the area before moving to a more urban community.

The assistant principal at Evergreen Elementary School, Gilmore’s mother Rometha, had another idea. She invited her son to speak to her students. He said he immediately noticed two things: the lack of Black male instructors and one habitually truant fourth grader.

The student’s disinterest in school impacted Gilmore enough to tell his older brother, Eddie Rocker. They agreed, “We have to mentor these boys.” Their weekly mentoring sessions led to the formation of a 501(c)(3) organization in April 2020.

Although Gilmore loves sports, he understands that the chances of them leading to future professional success are few and far between. He says he tells kids, “You have way more superpowers than that athletic stuff, so let’s find out what your other superpowers are and hone in on those skills.” Rocker offers, “We’re here to expose them to other options” with a mission to build a school-to-career pipeline.

Career opportunities in Ocala/Marion County are vastly unknown to his mentees, Gilmore says, adding, “You only know what you know,” so exposing kids to those unknowns produces possibilities for success. To him, success is also “allowing boys to hear the voices of Black men who represent well and are relatable.”

At their first annual Community Fun Day, 10-year-old Demarius McIntosh, a future difference-maker, is wearing his KD shirt and enjoying a snow cone. 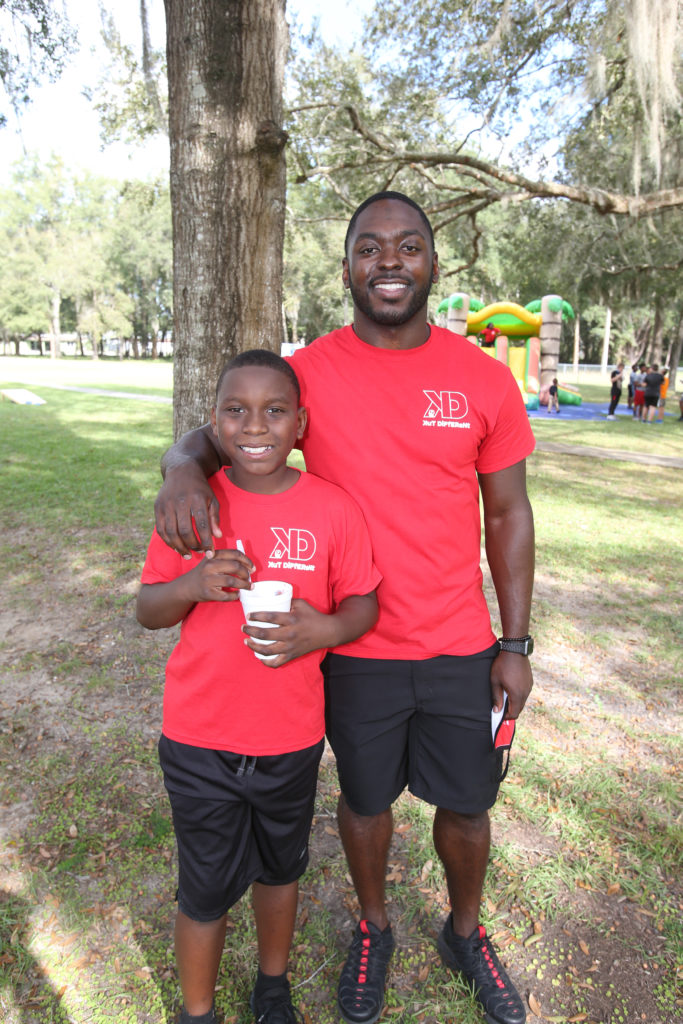 When asked what he likes most about KD, he answers, “What I like the most is that we get to go to cool places and meet new people and form relationships.”

Those cool places include field trips to Team Cone, the fire department and a 400-acre horse farm. But the coolest place for him was “the mayor’s office at City Hall.”

Demarius’ mother, N’Jyria Sutton, echoes her son’s enthusiasm. She likes the smaller groups and appreciates the way KD incorporates activities besides sports. She says her son “gets to interact with kids his age and men he can look up to” on and off the field. Sutton trusts the founders because she grew up with them.

“I know them and love them,” she says. “It’s nice to see my son building a relationship with them, too.”

Gilmore says, “I am a big believer in small wins.” So he concentrates on a core group of six youngsters from fourth to eighth grade. KD currently has a waiting list. But no fear. They have plans to mentor 12 to 15 members in 2021.

An African Proverb reads, “Train a child the way he should go and make sure you also go the same way.”

Ocala’s progenies’ maturation into manhood has led them back home to guide the next generation. The preservation and protection of our precious young kings appear to be in good hands.