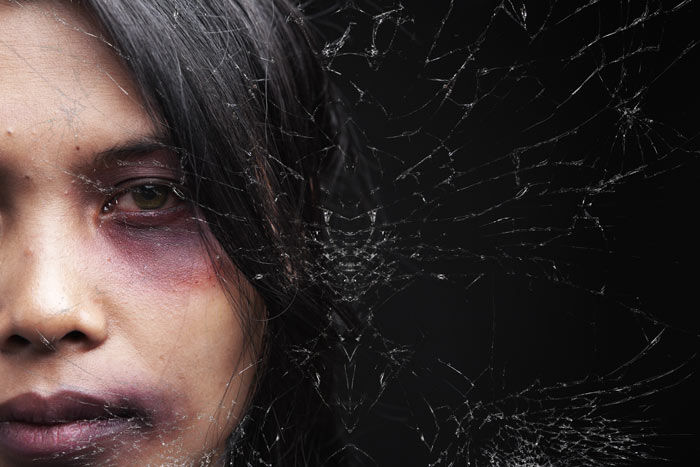 The first time it happened, she didn’t know what hit her. Literally.

When Linda’s* boyfriend slapped her so hard she fell off the kitchen stool, her immediate reaction wasn’t anger or fear but complete shock.

“I just couldn’t believe he did it,”  she says.

She and Ron* had been living together for a few months. Almost 10 years older than Linda, who was in her late 20s, Ron was charming and the life of the party. A Vietnam veteran and retired homicide cop, he had a dominant personality and could be loud and aggressive around other people, but until that particular day, he’d never acted that way toward her.

Ron followed the incident with flowers, gifts, attentiveness and promises that it would never happen again.

“If they hit you once, they will hit you again. There is no ‘one time.’ It was like that first time opened a door. Because I didn’t leave, in his mind that gave him license to continue,” recalls Linda, who began looking for reasons, trying to understand how she’d made him mad. “He always had an excuse: what he’d seen in ‘Nam, that he’d been a cop, that he was raised in a violent home.”

The couple moved to the Northeast where both had good-paying, professional jobs and an active social life. Linda began to dread events where alcohol was present because whenever Ron drank, he became abusive.

Gradually, he began doing many of the classic things that abusers do: controlling all the finances even though half the income came from Linda’s job, isolating her from family and friends, becoming extremely possessive and threatening to kill her if she tried to leave. He even told Linda that if her brothers came to get her, he’d kill them, too.

“When we moved up north near Ron’s mother, I soon realized she was terrified of him, too. I found out her husband had abused her,” says Linda, who until then had never personally known anyone who’d been in an abusive relationship.

Linda didn’t tell anyone about the abuse, not even Ron’s mother, who obviously saw the signs.

“I knew if I told someone, they would ask me why I was still there, and I didn’t have an answer,” Linda admits. “I didn’t want them to think he was a bad person, because if he was such a bad person, what would that say about me being with him? In order to protect myself and what people would think, I ended up protecting my abuser.”

The violence escalated. Instead of open-handed slaps, Ron was now punching her, dragging her by the hair, pushing her down stairs. She called the police on several occasions, but Ron played the “good old boy” card when they arrived, talking up his own law enforcement past.

Linda was hospitalized twice. When one doctor sent Ron out of the room and asked Linda if he was beating her, she denied it.

“I didn’t tell the truth because I knew when they released me I was going back home with him. I didn’t see a way out.”

Linda finally decided the only way to escape was suicide, even though this went against everything she believed in. One night when Ron was out drinking, she set in motion her final plan. She’d already made arrangements for a friend to take her dogs because she knew Ron would kill them. She’d written the goodbye letters to her family. She would take her life with the revolver Ron had bought her as a gift.

“I kissed my dogs goodbye and knelt by the side of the bed,” says Linda. “If you’re going to commit suicide, don’t pray first. I had a vision of my grandmother in her rocking chair where she sat and prayed for us kids. I heard the Lord say, ‘If you do this, she will never understand.’”

By the time Ron came home late, drunk and angry, Linda was ready and waiting for him at the top of the stairs, the loaded gun in her hands.

“I told him, ‘This ends tonight.’ I knew in that moment I was fully prepared to take his life,” Linda remembers. Ron apparently realized it, too, because he ran out of the house and drove to a friend’s.

When he returned the next day, sober, the two sat down and tried to talk things out, but Ron’s solution was to blame all his problems on other people and circumstances. Linda hoped the “show down” would turn things around, but nothing really changed.

About a year later, they moved to a different state and Ron was hospitalized and diagnosed with cancer, but the illness didn’t mellow him. He struck Linda on one of her visits to the hospital and a nurse witnessed the incident.

“The hospital psychiatrist came and talked to me and told me I had to leave him. He said Ron had made me the focus of his anger, and that because his cancer had advanced, he had nothing to lose. I went home, packed what I could fit in my car, took my dogs and drove 4 1/2 days to my family’s home in Georgia,” says Linda, who at that point had been with Ron for eight years. Ron made one threatening call to Linda’s father’s home, but she never saw him again. She learned that he died two years later from the cancer.

Linda, now 62, lives in Citrus County and regularly serves as a sounding board for women finding their way out of abusive relationships.

If you’re breathing this with a sigh of relief, it doesn’t mean you aren’t being abused. Abuse is all about one person exerting power and control over another. The situation doesn’t have to include physical violence to be considered abuse. Many abusers control their victims emotionally and psychologically.

Take a hard look at your relationship. If you answer yes to one or more of the following, reach out to a trusted friend or relative, or call an abuse hotline number to find out how to get help. (The same holds true for those outside the relationship. If you notice a friend or family member with a partner who does any of the following, have a private conversation with them and don’t judge. Offer assistance and encourage them to get help.)

demand to know where you are and who you are with at all times?

act jealous of your pets/children/friends?

humiliate you in public? (They may say they’re “just teasing.”)

blame you for their mistakes/problems/poor decisions?

force you to have sex or perform sexual acts?

control all finances or require you to ask permission to spend money?

get angry easily, especially if you don’t follow their advice or have the same opinion as them?

act one way in public and very differently in private?

blame their ex(es) for their problems?

act secretive about their past?

act/speak violently toward animals or other people?

threaten you (or your animals or loved ones) if you talk about leaving?

Victims don’t fit a stereotype and are found in every community, ethnicity, religion, economic background and at every level of education.

“When you are a victim of abuse, your trust is shattered, and that makes it almost impossible to leave. You can’t trust the person you’re with, and when you lose your self-esteem, you can’t trust yourself,” says Linda. “You can make a decision to just survive or to overcome. When you decide to overcome, you realize you don’t have to become the emotional hostage or victim of your circumstances.”

But no one can help  you if they don’t know  the truth.

Talk with someone who understands or has gotten out of an abusive relationship themselves. Call a shelter or hotline if you don’t personally know someone. Come up with a step-by-step plan of who you can call and where you can go to be safe if your partner becomes abusive. In Marion County the Ocala Domestic Violence/Sexual Assault Center offers counseling, temporary safe housing and legal and medical referrals to female victims of domestic violence and/or sexual assault and their children.

Documents and paperwork may be the last thing on your mind, but it’s essential to have certain items when you actually leave an abusive relationship. These can verify your identity, as well as help you get access to resources you’ll need. You should have in your possession:

passport (if you have one)

social security card (as well as your children’s cards)

any credit/debit cards in your name

rental policy/deed (if in your name)

utility bills (if in your name)

vehicle title (if you have a paid-for vehicle)

police reports/photos relating to the abuse

If at all possible, keep this paperwork together in one place so you can easily take it with you when you leave. If for any reason you need to return to a residence you’ve shared with an abuser to gather personal items, for safety’s sake, do not go by yourself. Bring friends or family members along, or ask the police to accompany you.

“People tell me I’m very courageous, but I always feel like I was a coward. I felt so much shame. My self-esteem was so battered, I really didn’t think I had the strength and intelligence to make it on my own,” says Anna Potter, who finally found the strength to leave an abusive marriage after 20 years.

In hopes of helping other women in abusive relationships, Anna tells her story in her recently published book, Cans In The Dryer (Why Can’t I Just Leave?).

Although Anna’s husband rarely hit her, the emotional and mental abuse were continual.

“There were many times I wished he’d hit me hard enough to leave a bruise so I’d have ‘proof’ that I was being abused,” she remembers.

Raised in a home where dysfunction was the norm, as a child and young woman, Anna felt responsible for her father, who had tried to commit suicide. It took decades to understand that the traumatic bonding she experienced with him carried over into her marriage, making it almost impossible to leave the abusive husband she feared, yet pitied.

“Trauma in childhood can carry over into a marriage,” says Anna, whose husband was diagnosed with obsessive-compulsive personality disorder toward the end of their marriage. “I had complex post traumatic stress disorder (PTSD) from my childhood, but I didn’t know that, and the abuse in my marriage just added to it.

“I had to figure this out on my own; I didn’t get any real help from the church leaders and therapists I went to. I felt I was supposed to tell my story to help other women to look back before you can move forward, to see what’s in your past that’s holding you in a bad marriage.

“I never lost my faith through this,” adds Anna. “I wanted children badly but never had them because of the situation I was in, so I think of this book as my legacy.”

Now happily remarried and living in Marion County, Anna regularly shares her story at events like Night of Hope to encourage other women.

Cans In The Dryer (Why Can’t I Just Leave?)  is available online through xulonpress.com/bookstore,  amazon.com and barnesandnoble.com.