Most of us have never even seen the Sharpes Ferry Bridge on CR 314. Those who have crossed often use it as a convenient bypass to shave valuable minutes off a trip to the coast. But the Sharpes Ferry Bridge is more than just an alternate route, and after more than 70 years as a Marion County icon, it’s about to undergo a dramatic transformation—one with an $8 million price tag.

Driving along the Sharpes Ferry Bridge, with the murky Ocklawaha River underneath and thick, dense forestry all around, you hear and feel the rhythmic chank chank chank of the steel grates below. The weather-aged lead paint is peeled and chipped, and patches of green mold and orange rust are abundant. As sunlight filters through the tall pine trees, travelers are immersed in a quiet, almost Zen-like environment—even if only for a moment. Peering over the side of the bridge to the riverbanks below, you might spot a few fishermen with tackle boxes at their sides, overturned buckets as makeshift stools, their lines cast into the river for the promise of a catfish or bass. A nearby blue heron also has dinner on its mind.

Cars are usually few and far between on this particular stretch of County Road 314. At last count, the average was just over 5,000 a day. But when they do reach the bridge, they slow to a 15-mile-per-hour crawl, the narrow bridge barely wide enough to handle both north and southbound traffic. Some would say that’s part of the charm of the old bridge, which was first built in 1926. Others, however, say the bridge is well past its prime and should be replaced.

After much debate and research, the latter group will have its way. The 237-foot-long bridge, which was rebuilt in 1971, has been classified as “functionally obsolete” by the Florida Department of Transportation and will be replaced. The important question is what will come of the current structure, the one that’s eligible to be listed on the National Register of Historic Places.

“When it was built more than 70 years ago, the Sharpes Ferry Bridge was state-of-the-art,” says Ocala-Marion County Director of Transportation and Planning Greg Slay. “Of course, since then, our codes have changed and so have building materials.”

The condition of the bridge has deteriorated over the years and the element of the bridge that makes it so unique, the swing pony truss, has long since stopped working. In its heyday, the truss element opened and swung the bridge out 90 degrees, allowing boats to continue navigating down the Ocklawaha. Today, however, during routine maintenance and safety checks, the bridge must be rotated manually using heavy machinery. A job that once took minutes now takes hours. 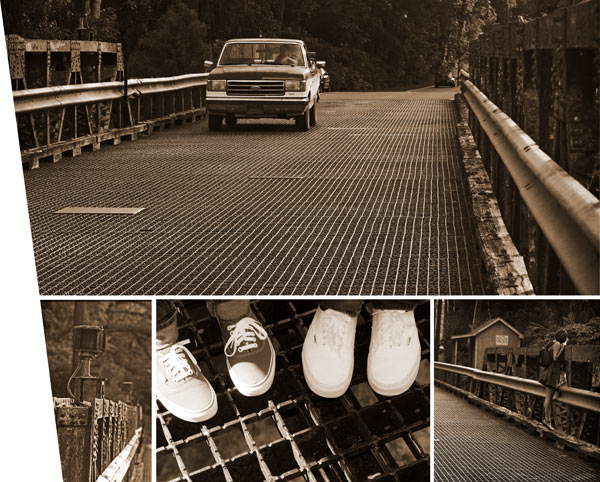 During one of those routine checks, the bridge’s overall safety was called into question.

According to a September 2008 Project Development and Environment (PD&E) study conducted by engineer Robert Woods for the Florida Department of Transportation, the bridge is deemed both “functionally obsolete” and “structurally deficient,” which means essentially that the bridge should be replaced or heavily revamped within the next six years.

The PD&E study goes on to say that the Sharpes Ferry Bridge scored 22.3 out of a possible 100 on its sufficiency rating, which factors in criteria such as the bridge’s structural adequacy for safety, serviceability and functional obsolescence, and the bridge’s essentiality for public use.

Woods also wrote on the bridge’s health index. He reported that a score below 85 “generally indicates that some repairs are needed.” Sharpes Ferry’s health index measured 41, Woods observed, “an indication of the need to replace the bridge.”

One of the few remaining swing pony truss bridges in the state and the only remaining one designed by the original Austin Brothers Bridge Company—a company that began building bridges in the late 1800s and today goes by the name Austin Industries—the historic classification of the Sharpes Ferry Bridge played an important role in exactly how the bridge would be replaced.

“The bridge is a Pratt Truss structure, the only intact bridge of its kind in the state,” says Mickey Thomason, Central Region Manager for the Florida Department of Environmental Protection’s Office of Greenways & Trails. “Because of its age, the State Historic Preservation Office (SHPO) requested that it remain intact and be allowed to stay where it is or be put somewhere that it could be interpreted for its historic value.” 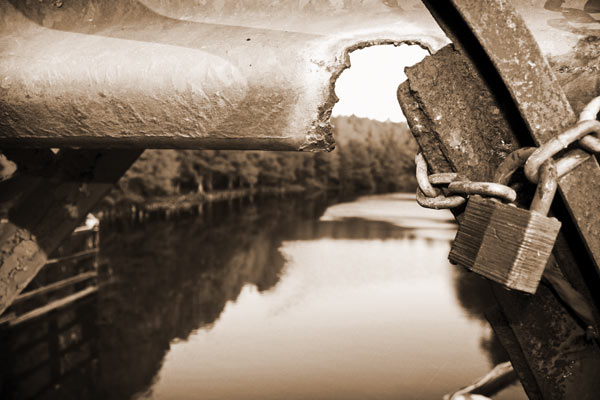 Wouldn’t it just be easier to knock it down and start from scratch?

“Of course,” says Thomason. “It would be less expensive and easier to demolish the old bridge. But that’s part of why SHPO reviews. They see the bridge as a cultural resource that’s worth preserving, so that’s what we’re going to do. You could argue it either way, though. It’s certainly a picturesque bridge, an anomaly in these modern times we live in.”

“Things of an historic nature are valuable assets to any community,” he says. “Sometimes it’s unfortunate that it takes something getting demolished to realize what was lost. We’re trying to keep that from happening here.”

Thomason adds that many preservation options were discussed. Originally, the structure was located at County Road 316 in Eureka before being moved to its current location, so one option was to move it back there. It was decided, however, that the old bridge will remain in its current location—for the most part. After analyzing several construction proposals, the decision was made to build a newer, wider bridge in place of the current one and to move the historic Sharpes Ferry Bridge slightly to the north where it will eventually serve as a pedestrian walkway in the Cross Florida Greenway.

“I’ve seen the draft plans at this point and it looks like it [the current bridge] could be used for people to fish off of in the river, as well as a potential pedestrian crossing,” says Thomason. “There’s also supposed to be a five-foot-wide separated sidewalk with a barrier wall between the active traffic incorporated into the new bridge as well.”

Preliminary plans for the new traffic bridge include two 12-foot-wide lanes bordered by 8-foot-wide shoulders. That should easily allow drivers, both north and southbound, to continue driving at 50mph—no need to slow down and enjoy the surrounding views.

So where’s the money coming from for such an elaborate project? The nearly $8 million price tag will be split between federal, state, and local funding sources.

“Half of the money will come from the county and the other half from the state and FDOT,” says Atwell. “We were able to fund part of the cost with leftover money from bond projects.”

Atwell explains that a bond is set up for the bidding and construction of a variety of road projects.

“All our projects have already been bid upon and we realized a substantial savings from what was budgeted,” he adds. “In this economy, workers and contractors are willing to work for less.”

According to a recent story in the Star Banner, most of the money for the bridge—$3.4 million—will come from $21 million in funds the county borrowed in 2009. The rest will be funded using transportation impact fees. The Banner goes on to report that that funding is in addition to $2.4 million from the federal government secured through U.S. Rep. Ric Keller. Congressman Alan Grayson has asked for an additional $2.1 million for the bridge replacement project, but that money has yet to receive final approval from lawmakers.

“This project is a good use of federal transportation funding,” says a statement on Grayson’s website, “because it will help avoid the potential of fatal structural collapse and other hazardous conditions, ensures greater hurricane safety, and improves local transportation options.”

“There are [also] other positives of a new bridge being built,” adds Thomason. “Besides transportation and safety, the design we’re working cooperatively on with DOT and the county will elevate the bridge up and out of the flood plain and improve wildlife connectively along the river. Having a dedicated pedestrian crossing will also be an improvement.”

And by including the current Sharpes Ferry Bridge into the state’s Greenway trail system, the state is not only preserving a piece of history but also making it accessible to a wider audience.

“We’re looking forward to having a natural service trail run along the east side of the Ocklawaha River from the bridge north and eventually hook up to Rodman Dam and the trail up there,” Thomason says. “The eventual goal is to be able to walk or bike from one coast to the other.”

The Sharpes Ferry Bridge may one day be just a few small, picturesque steps of that journey, but it’ll be there all the same. Just like it’s always been.

A. The existing swing truss of the old bridge. It will be fixed in place and no longer rotate. The bridge will be utilized as a pedestrian walkway.

B. Two, 12-foot paved lanes will travel east and westbound.

C. Eight-foot shoulders will border each side of the new bridge.

D. The new bridge will be 52 feet wide, including a sidewalk.

F. Riprap. An erosion control material to protect the soil underneath the bridge structure.

G. The mechanically stabilized earth wall will retain the foundation system from encroaching on other property.

I. Pile bents are pre-stressed concrete piles to support the new bridge’s superstructure.

J. The fender system, made out of wood, is a channel to indicate where boat traffic should cross under the bridge.

‘Should Sharpes Ferry Bridge Be Replaced?’

NO! “The bridge should be made safe, structurally sound, but I wouldn’t take it beyond that because it’s not a major highway. We need to not change the area environmentally any more than necessary.” —Milliann Johnson

YES! “That bridge terrifies me every time we cross it when we go out of town—it’s only wide enough for one vehicle! Safety does come at a price, but Marion County shouldn’t wait until there’s a tragic accident. It needs to be prevented altogether.”—Meghan McLaughlin