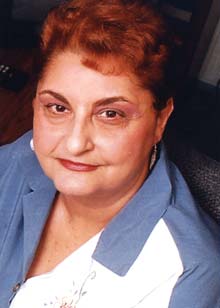 Connie Mason takes romance very seriously. The prolific romance writer has more than 50 books under her belt. This year, she fits in perfectly with the theme of the Lake County Libraries’ Festival of Reading, “Romancing the Book.”

Connie says one of the reasons she was eager to participate in the festival was because she depends so heavily on the library in Clermont when she’s researching one of her books.

“I don’t stick to one time era or even one country,” she says. “I go from Vikings to Oklahoma, where Indians were driven to the west in 1880. That means I have to do a lot of research.”

At one time, Connie did all of her research at public libraries. Now, however, she also uses the Internet and a collection of books gathered through the years.

“I have to be very careful about clothing, food, and other elements of the historical period,” Connie says. “If I’m not, there’s going to be a reader that finds the mistake.”

Writing was something Connie always wanted to do, but raising her three children was always the priority in her life. All that changed one day when Connie was helping her son find information on the War of 1812 for a school composition.

“I was helping him do research when I thought this would make a good book,” she says. “I wrote my first book in longhand, on 12 legal pads. Then I took a night course in typing and began typing my manuscript.”

Once her manuscript was finished, Connie sent three chapters and a synopsis to a variety of publishers.

“At that time, there were a lot of romance publishers, but Leisure was the one that accepted my book,” Connie says. “I’ve also had the same editor all this time. I’m an old-fashioned person. I believe in loyalty. They in turn have backed me on everything and built my career.”

The career Leisure Books helped Connie build began with a $500 advance on her first book. Fifty books later, she’s still going strong. And if there’s one thing Connie has learned over the years, it’s to appreciate her readers.

“I answer all my fan mail,” she says. “I’ve always done that. Before e-mail got so popular, I’d sit down every evening and answer the letters. Some ladies have written to me for 20 years and are like old friends.”

Connie believes one of the reasons she’s done so well is because of the support of her family and friends. Her life focuses on her three children, nine grandchildren, and one great-grandson (with another on the way). And you can bet they’re all fans.

These days, a new generation of readers is discovering Connie’s books. In response to her continued popularity, Leisure Books is issuing reprints of her earlier books.

Connie believes the attitude toward romance novels has changed a great deal over the years. The novels depicting violence toward women are no longer tolerated.

“Now the trend is toward a sexier book,” Connie says. But she’s quick to note that her books have always been considered sexy. And Connie is a believer in the old adage that if it’s not broke, don’t fix it.

Connie’s next book will be out in November of 2008. Her most current book, A Breath of Scandal, is on bookshelves now. Connie looks forward to sharing her insights and opinions during an author panel discussion called “Pillow Talk” during the 2008 Festival of Reading at the Clermont Women’s Club.

A Breath of Scandal

Lord Julian Thornton, Earl of Mansfield by day and secret agent of the crown by night, has sworn never to love another woman. But when a mission goes wrong and Julian is left for dead, washed up on Scotland’s rugged shore, his only hope is a seductive, mysterious woman named Lara.

The Price of Pleasure

Young and beautiful, she was rumored to buy men for purposes both scandalous and secret. Whatever she did with them one thing was certain: Her unfortunate victims were never seen again.

The flame-haired virago bearing down on Ross MacKenna was far too shapely to be a seasoned warrior, but she was just as deadly. As she engaged him on the battlefield, Ross knew her for a MacKay, long-time enemies of his clan. What he didn’t know was that she would soon be his wife.

A Taste of Paradise

When lovely Sophia Carlisle stowed away on a ship bound for Jamaica, she hardly expected to find Christian Radcliff at the helm. She and the captain had a turbulent history, which involved the breaking of her heart and the death by duel of his best friend. How will they handle being confined together during the long journey to tropical shores.